The annual list is an essential source of information about companies that are utilising geospatial data and tools to solve problems and is aimed to help our community make sense of the ever-changing geospatial industry ecosystem.

Geoawesomeness is pleased to announce our #GlobalTop100Geo 2022 Edition. Hope you find the list useful.

If you have any questions regarding the list, please review the FAQ section at the bottom of this post. If you have further questions, comments and/or would like to collaborate with the team, feel free to reach us at info@geoawesomeness.com 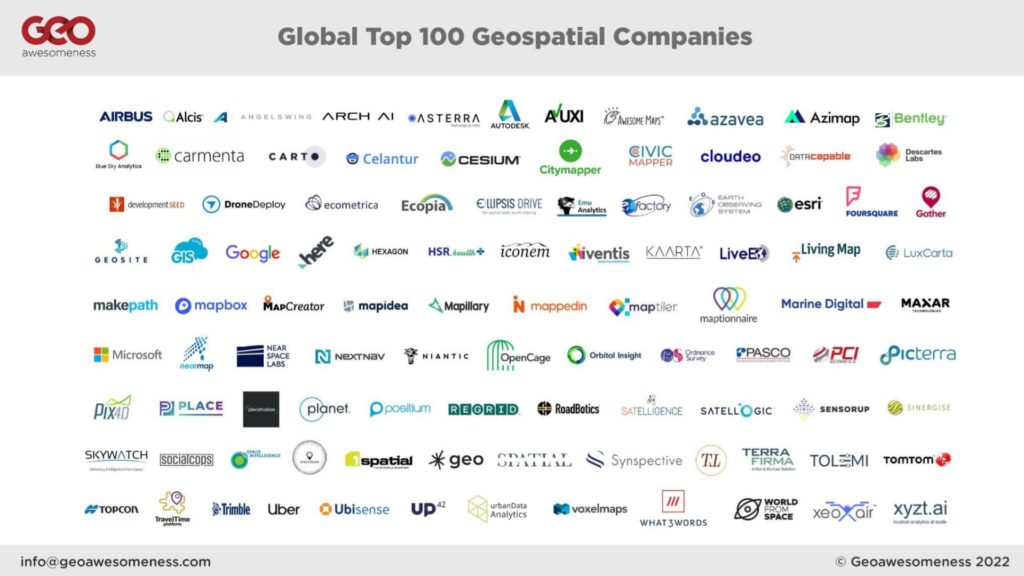 How can I ensure my company is considered and potentially makes it to the 2023 list?

The list was decided based on the votes by 12 Geospatial experts from all over the world.

Companies nominated themselves via the online form. In addition to the official nominations, each panelist was also empowered to make further recommendations. Nominations and the company database used for 2019 and 2021 were also considered. A final pool of companies was complied and the experts reviewed all the details and cast their individual votes. The individual votes were tallied and the final global top 100 companies list was published.

Each panelist brings a unique perspective and has her/his strength in a specific area of the geospatial industry. Therefore each panelist was free to review the list through their unique prism. Company size, revenue, growth, X-factor, positive impact on society, diversity, longevity, open source contributions, and many more factors were considered. We are aware that one size doesn’t fit all.

Whom do I contact in case of questions or clarifications?

Please send us an email at info@geoawesomeness.com

Why understanding point clouds is key to maximising LiDAR technology

Have you tried out 3D scanning tech yet? It’s well worth a look for anyone who is in the architectural, engineering and construction space, as well as facilities managers and a whole range of other industries.

It’s a great time to try 3D laser scanners as they are becoming much more widely available and affordable on the market. A range of scanners exist, from tripod-mounted to handheld scanners; the latest iPhone 12 Pro even includes 3D scanning technology in the phone’s camera, though they aren’t detailed enough for more than quick checks on small elements of a project.

If you have already tried it out, you’ll no doubt have seen the scans you can generate – also known as point clouds. They look pretty simple – but in truth, there’s a lot to understand about point clouds if you’re to get the best value out of them, and by extension your investment in 3D scanning tech.

What are point clouds?

Point clouds are, in essence, very simple. They are datasets that are made up of ‘points.’ Each point represents something – a part of a wall, window, or wire, for instance – and the point contains information on where that part is in space. Together, these points form an image of whatever you had scanned.

Millions of points make up a point cloud – billions, if you are scanning a large building or complex. Viewed from a distance in point cloud software, they look a bit like impressionist paintings – and up close, you can see all the individual points that make up the scan.

On their own, point clouds don’t do much – you need point cloud software to extract value from that data.

What is point cloud software?

Point clouds require specialist software to view and manipulate then. Firstly, before point cloud data can be viewed it must be ‘registered’ so that the data all lines up and looks like the object or space you have scanned. This is especially important if you are stitching multiple point clouds together.

Because every point has data about where it is in space, you can also use point clouds to take incredibly accurate measurements of a space, calculate volumes, and more. Again, point cloud software is needed to do this.

Where can I get point cloud software?

Most 3D scanners will come with their own software, which will allow you to do some things with your point clouds, including registering them and taking measurements from them. However, if you want to export your point cloud data to other applications such as Revit, you will likely need additional point cloud software to handle the process. There is a variety of ways in which point cloud data can be made to work with other applications, some of which are more complicated than others – the right software can make the process much smoother by automating some elements, such as classifying points (identifying them as walls, cables, or similar) or creating usable BIM objects from the data that can be used in lots of 3D design applicatons.

Whatever methodology you use, it’s important to understand that finding ways to use your point cloud data is an essential part of maximising the benefits of 3D laser scanners. The information scanners can generate, and therefore the value they can provide professionals in a range of industries, is immense – but only if those professionals have the tools to make use of the data the scanners output. Most scanners will come with their own software for registering point clouds, but those applications won’t often talk to other downstream systems easily. Therefore, it’s important to find software that seamlessly integrates with whatever hardware you are using. Once that part of the process is in place, there’s no stopping you from unleashing the potential of LiDAR and point clouds.

Author Bio:
Mark Senior
Mark has a strong background in Building Construction and Land Surveying. He has been at the forefront of significant technology changes in the Geospatial industry over the last 25 years. He is the business director at PointFuse, a leading BIM Coordination software. He has been involved with PointFuse since its conception, shaping its development from bleeding edge technology to the successful commercial solution it is today.