Everything happens not just somewhere, but also sometime—which in GIS terms could be translated to 3D and 4D. But although terms such as ‘spatiotemporal’, ‘real-time’ and ‘situational awareness’ are commonly used when thinking about modern applications of geospatial tech, the truth is that the fourth dimension has been ignored by GIS standards for a long time…

Anyone who has worked with timestamps, even in an Excel sheet, will know that there are dozens of different conventions for date and time, and it’s painful to work with them—every time you need to work with time, things get complicated!

Another issue is analyzing the time dimension in spatial data. Perhaps you might want to know what kinds of patterns can be extracted from object trajectories, for example—but how do you extract the information and knowledge you need from the data available to you? If you have ever tried to find the answer to this question, you will immediately understand that GIS is really in its infancy when it comes to temporal analytics.

When researching this topic I found a great podcast from Mapscaping which featured GIS legend Anita Graser discussing the subject. Anita is one of the pioneers in this area, having developed the acclaimed Time Manager plugin for QGIS, back in 2011, to bridge the gap in how traditional GIS handles the temporal dimension.

How is temporal information stored and modelled?

Many GIS file formats support the collection of time data—in fact all of them can work with temporal information to some extent, but some do it more natively than others. In the vector data file type, you can add timestamps as attributes, either in the metadata or simply in the layer name. With raster data files, time information is usually put into the file name. Meanwhile, NetCDF—a more sophisticated file format typically used for meteorological and ocean data—has native time information support, making it easy to automate visualizations.

One thing to note when using time data is that the use of ISO timestamp format is generally recommended, as it makes it easier to analyze and exchange data. Anita points out:

There are way too many conventions for how to store time information. Think of the American Standard, for example: Month, day, and year. This format can mess up a lot of things. I recommend sticking to the ISO standard timestamp format: Year, month, and day. This is the only reliable format to sort dates.

It’s better to have local timestamps, even if everything is stored in UTM or UTC. It will make an enormous difference if you have to track data and need to calculate movement speeds and directions.

Experience shows that there might be a number of potential surprises you should be aware of when working with multiple time zones. For example, in a database environment like PostGIS, the server has specific time zone settings: It’s either your local time zone or set to UTC. However, in some cases, it may try to convert data from UTC to local time in the background—making you wonder why there’s suddenly a two-hour gap between the data you’re looking at and what you see in your raw database!

Analyzing and visualizing space and time 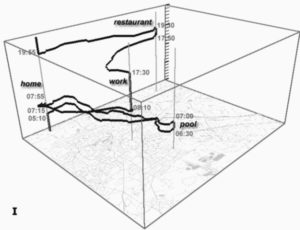 One of the analysis methods for visualization of simple 4D datasets is by using so-called space-time cubes, where the x and y planes represent the spatial aspect of the data while time is modelled onto the z-axis. With these, you can perform a simple visual exploration of those data sets with limited movement: If you only see a vertical line, it’s easy to tell that there is no change in the x and y dimensions, and therefore the object is stationary.

On the other hand, if you see a diagonal, you can tell that your target object is travelling, and from the degree of ‘steepness’ of that diagonal, you can intuit how fast or slow that movement is. For multiple objects, it is possible to tell if they come together at any point along the way and whether they spend an extended period of time together at that location.

This method is a simple visualization tool for exploratory analysis—it doesn’t come with automatic tests. For a simple question like the one above (did your objects really meet in the same space at the same time?), you can have a look yourself if you have something to plot in 3D. However, once you have four or more objects, it becomes difficult to see patterns because it gets very messy, very quickly. This is the challenge of exploring larger data sets or those that contain greater amounts of movement.

What does the future bring?

Although the field of temporal analytics in GIS is still in its early days, the situation is improving. In mid-2020, QGIS v.3.14 added native temporal support for vector, raster and mesh layers. Each layer now has a new ‘Temporal’ tab within ‘Layer Properties’.

Esri has been actively supporting temporal analysis as well. Moreover, Open Geospatial Consortium (OGC) recognizes this capability gap, and there are a number of standardization initiatives happening as we speak.

It seems that by its very nature GIS has been designed to work with 2D and 3D data. Initially, the time variable was not considered to be critical, as there was limited data collection, and very few use cases for four-dimensional data analysis. As the fourth dimension started to become increasingly relevant, the geospatial community came to realize that GIS design is an inherently three-dimensional framework, and working with time proved difficult due to both complexity and lack of standardization. Fortunately, some brilliant minds have been working on this problem for a few years now, and we can say with confidence that GIS will soon become truly four-dimensional.

Flying a drone in India? See what 2021 drone rules say for pilots 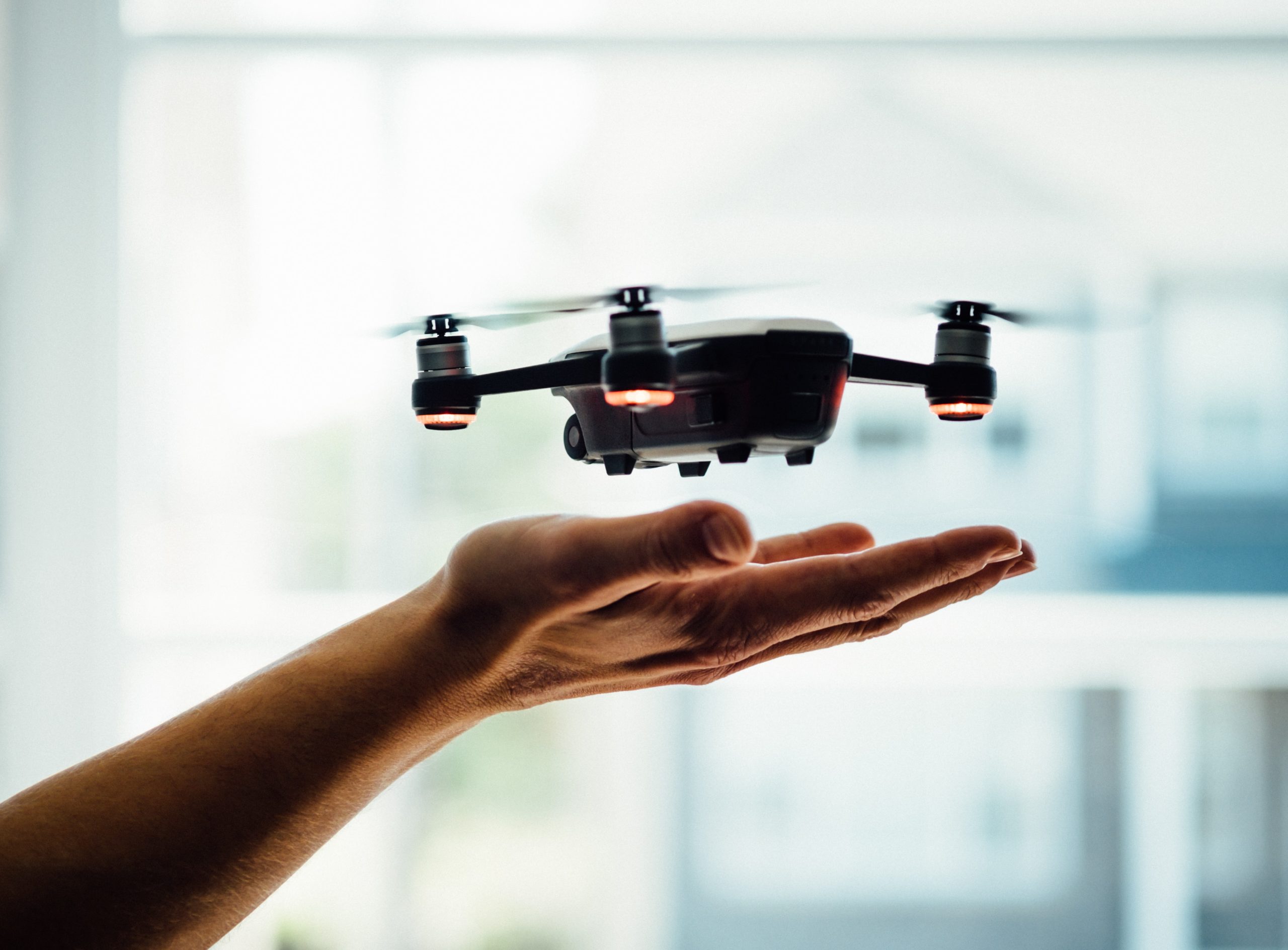 India’s Ministry of Civil Aviation has released a new set of drone laws and regulations for anyone operating an unmanned aircraft system in India. So, what do pilots need to know about the 2021 India drone rules?

What kind of permits or licenses do drone pilots need? Is there any age limit to drone flying? Which are the prohibited areas where you cannot operate a drone in India?  Is drone delivery legal in the country? What do the penalties for non-compliance look like? This article explores all that and more…

The first thing to know is that if any liability arises because of any damage to a person or property, the drone operator is held accountable. Therefore, it is extremely important to fly responsibly, operate only a legal and compliant drone, and ensure that you are following the government’s rules to the letter while flying.

Must read: India’s 2021 drone rules could be a deathblow to an already struggling industry

Nano Drones: For drones weighing less than or equal to 250 grams, no license or permit is needed.

Micro or Small Drones: To fly a drone weighing more than 250 grams and less than or equal to 25 kilograms, whether for commercial or recreational purposes, you need the UAS Operator Permit-I (UAOP-I). This permit mandates that the pilot follows the Standard Operating Procedure (SOP) prepared by an authorized UAS operator and accepted by the Directorate General of Civil Aviation (DGCA). The operations must be limited to visual line of sight and the drone must not carry any dangerous goods. In fact, drone delivery of any kind should not be attempted with UAOP-I.

Medium and Large Drones: For any operation that requires a drone weighing more than 25 kilograms, you need the UAS Operator Permit-II (UAOP-II). Here also, all operations must be conducted in accordance with the Operations Manual prepared by an authorized UAS operator and approved by the DGCA. You will also need a Safety Management System in place, and take prior clearance from Air Traffic and Air Defence Control. In this category, carriage of dangerous goods, BVLOS operations, and drone deliveries are allowed – subject to clearance by the DGCA, of course.

The Central Government can exempt any Ministry, Department, or a government-affiliated agency – at both the central and state level – from the requirements of a drone operator permit if it is national interest or helps to uphold the security of the country.

In India, no drone shall be flown:

For an expanded list of no-fly zones in India, scroll down to the bottom of this article and see the document issued by the government for 2021 India drone rules.

Except for the Nano category, all drone operations shall take place only after prior permission has been received for a flight or series of flights through the Digital Sky online platform. The drone operator will also ensure that the aircraft stays within the defined area for which permission was obtained, and furnish a log of each flight through the online platform.

A drone pilot is liable for the protection of any data gathered during a drone operation. You must follow suitable procedures and have hardware in place to securely store or dispose of such data. Moreover, you have to ensure that the data gathered during operations is not shared with any third party without the prior permission of the person to whom the data pertains.

Also see: Thinking of importing or manufacturing drones in India? Read this first

Drone swarms and indoor operations are allowed only with Nano and Micro category drones. Swarm operations can take place only in approved areas in accordance with the conditions OK-ed by the DGCA. Flying in enclosed premises should not be attempted with Small, Medium, or Large category drones.

Student Remote Pilot License: These are issued for a fee by an authorized training organization. A student license remains valid for a maximum period of 5 years, and can be renewed for an additional period of 2 years.

Remote Pilot License: These are issued for a fee by the DGCA, subject to the submission of a certificate of training and a skill test report from an authorized training organization. A remote pilot license is valid for 10 years, and can be renewed for another 10 years with each renewal application.

Minimum Qualifications: You should have passed class X or its equivalent examination from a recognized Board. You should clear a medical examination as specified by the DGCA. You should also be able to clear a background check conducted by a concerned government agency for the verification of your character and antecedents.

Except for Nano category drones, any individual who operates a drone without a valid license or permit shall have to pay a fine of INR 25,000.

Flying over no-operation zones will attract a fine of INR 50,000.

Drone flying without valid third-party insurance will be subject to a fine of INR 10,000.