Queen Elizabeth II, the UK’s longest-serving monarch, has died at Balmoral castle, aged 96, after reigning for 70 years. It marks both the loss of a revered monarch — the only one most Britons have ever known — and the end of a figure who served as a living link to the glories of World War II Britain. The Queen came to the throne in 1952 and witnessed enormous social change. She presided over its fitful adjustment to a post-colonial, post-imperial era and saw it through its bitter divorce from the European Union.

1. The key milestones of the life of Queen Elizabeth II

The life of Queen Elizabeth II began on April 21, 1926, when Princess Elizabeth Alexandra Mary was born in Mayfair, London. She was the first child of the future King George VI and Queen Elizabeth, later called the Queen Mother. 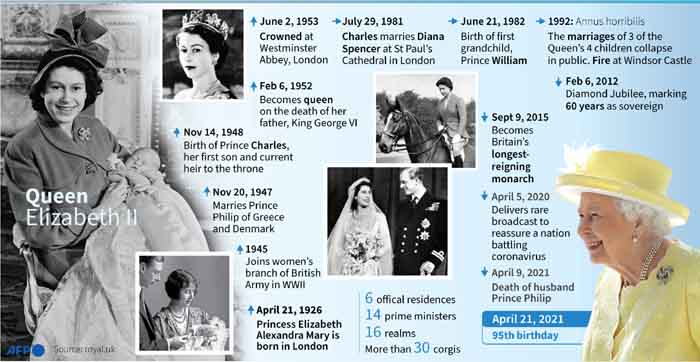 2. Which countries did Queen Elizabeth II reign over?

Queen Elizabeth II was the official queen of 15 different independent countries. Those countries are together known as the “Commonwealth realms” – a smaller subset of the Commonwealth of Nations, which also includes many queenless republics. Every one of the 15 Commonwealth realms is considered a fully-fledged independent country and a member of the UN, despite sharing the same monarch. Here’s a list of all the Commonwealth realms that exist today, in order of when they became independent:
United Kingdom, Canada, Australia, New Zealand, Jamaica, The Bahamas, Grenada, Papua New Guinea, Solomon Islands, Tuvalu, Saint Lucia, Saint Vincent and the Grenadines, Belize, Antigua and Barbuda, Saint Kitts and Nevis.

The British royal family can trace its roots back nearly 1,200 years. Queen Elizabeth II, had three generations of direct heirs living, a line of succession not seen since Queen Victoria’s rule in the late 19th century. 4. The line of succession

With the passing of Queen Elizabeth II, there is a new line of succession to the British throne. The queen’s oldest son, Charles, has become king. And with his ascension to the throne, members of his direct family, including his sons Princes William and Harry, are now higher in the line of succession. In general, succession falls to the first-born child of the heir and their children, followed by the next oldest sibling of the heir and their offspring and so on. That’s why, for instance, Prince Charles’ children and grandchildren are ahead in line of Charles’ oldest brother, Prince Andrew, the Duke of York. 6. Map of every royal family home across the United Kingdom

While Buckingham Palace remains the Queen’s official residence, most of her time in the last few years have been spent at either Windsor Castle or other holiday homes like Balmoral Castle and Sandringham House. Of the 20 properties that you see on the map above, eight are reserved exclusively for Queen Elizabeth II and Prince Philip. The other roomy castles, manors, and cottages are home to the monarch’s children and grandchildren, though many of them have purchased their private properties too. 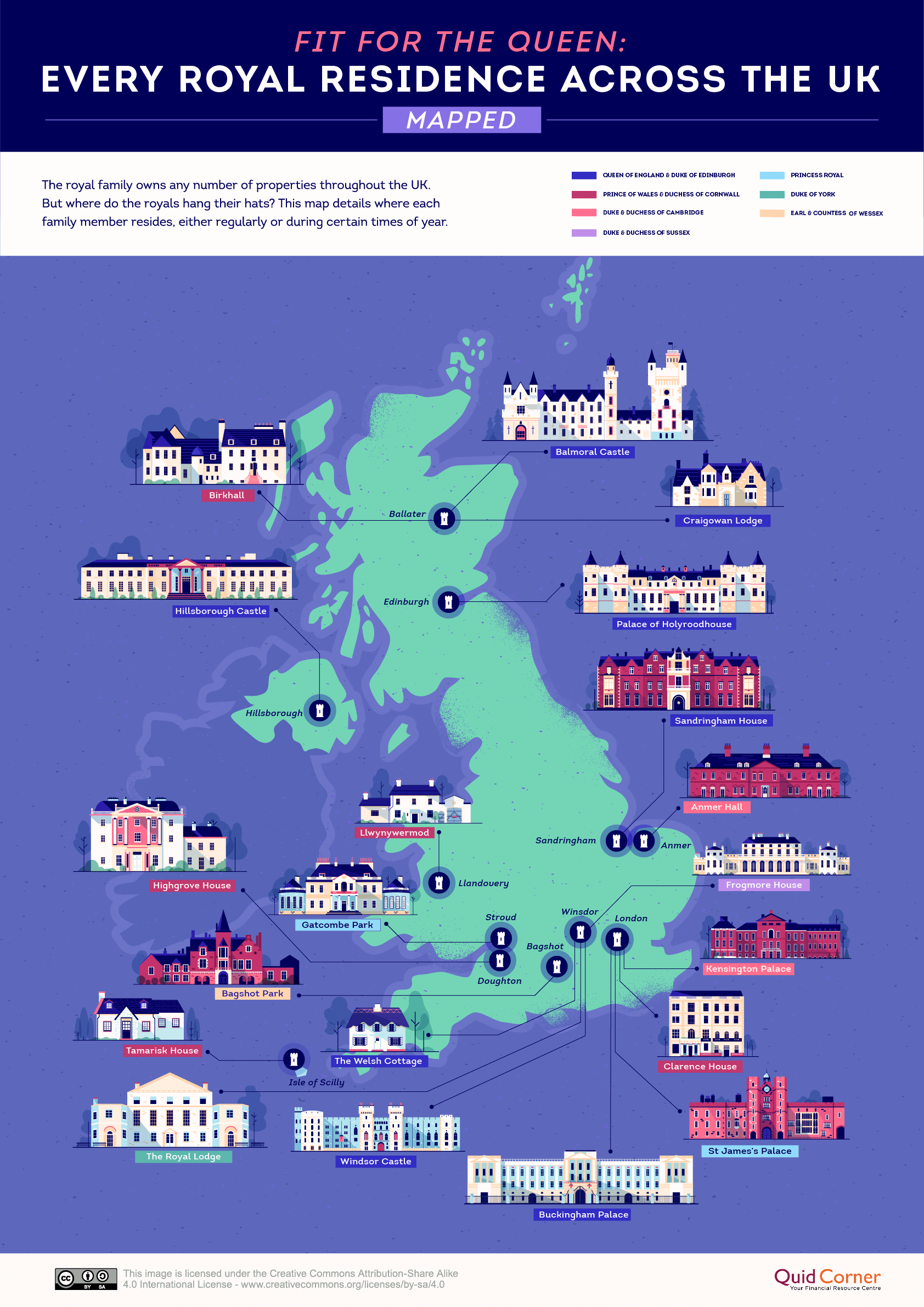 7. Queen Elizabeth II is the Most Admired Woman Ever

Queen Elizabeth II had appeared more than 50 times in the top five of the Gallup list of the most admired woman, since Gallup started their annual survey in 1948. 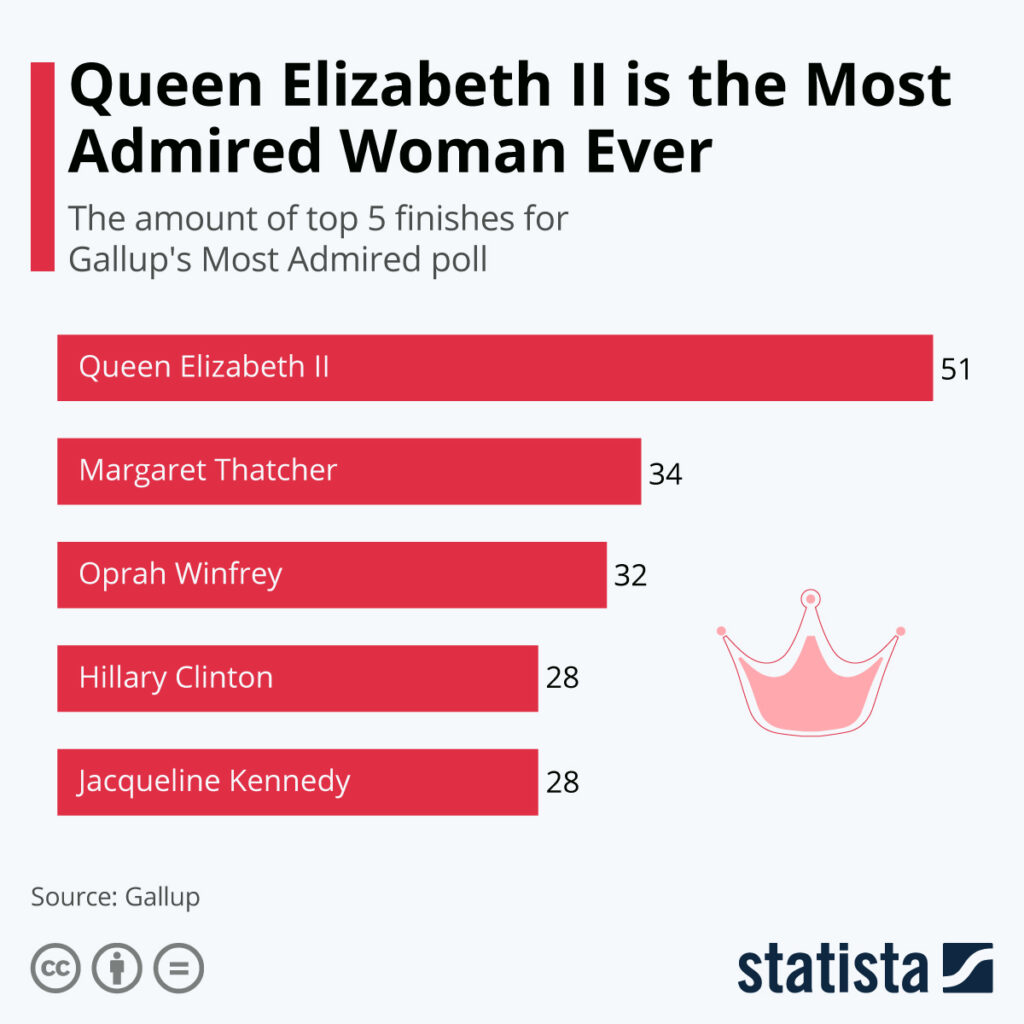 8. The Costs of Maintaining the Crown

The royal household of Queen Elizabeth II receives public funding in the form of the Sovereign Grant established in 2011. It’s the part of the expenses the tax payer picks up for the Queen to fulfill her official duties as the head of state and nation. The Queen also has other means of funding, for example her personal investment portfolio. 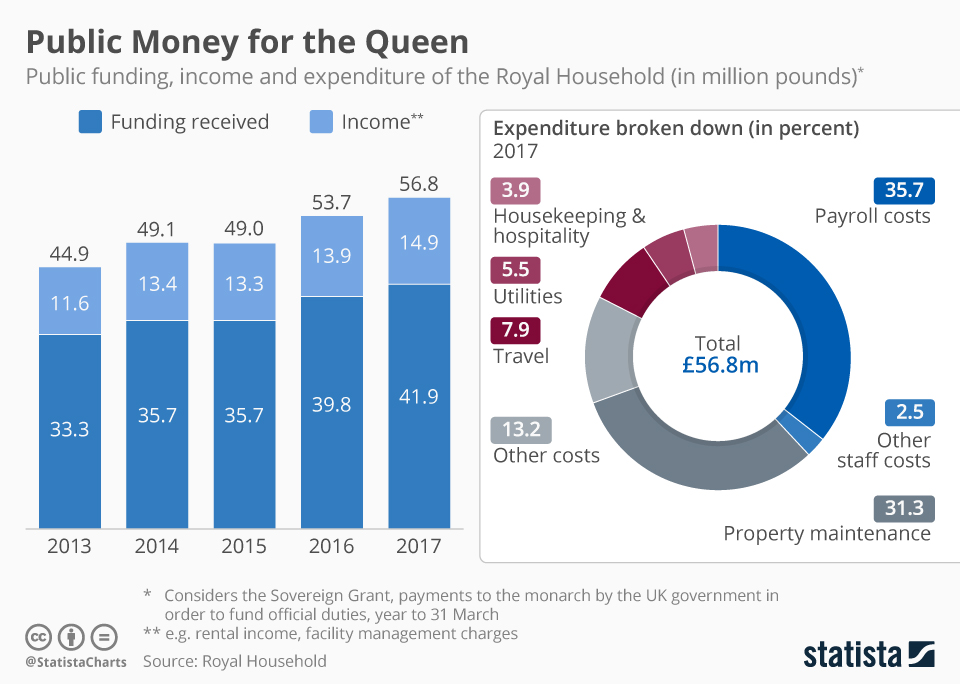 Queen Elizabeth II undertook a number of states and official visits over her 70-year reign (1952 to 2022) as well as trips throughout the Commonwealth, making her the most widely travelled head of state in history. source: Vogue
Say thanks for this article (3)
Aleks Buczkowski
965 posts
Want to be an author?

Below you’ll find a summary of the most interesting satellite-based observations collected this summer with the use of Copernicus Sentinel-2 satellites. We focus mostly on events resulting from the effects of global climate change and also a couple of military-related events. The ongoing droughts all over the world are stretching water supplies thinner and thinner. While in other parts heavy rainstorms are causing devastating flooding at a scale that can be observed in openly available lower-resolution satellite imagery.

July is globally considered the month of heat. Scorching temperatures have been fueling wildfires in several countries, especially in Europe. Below you can see a fire near Ladrillar in Spain, where officials have quickly issued evacuation orders. Moving to the West, the Oak Fire in North America – up to now, the largest fire in California this year. Later on this summer, we could observe a fire that broke out in the Grunewald forest in Berlin, following an explosion at a munitions storage site and the Garceau Fire on the west of Polson in Montana US. 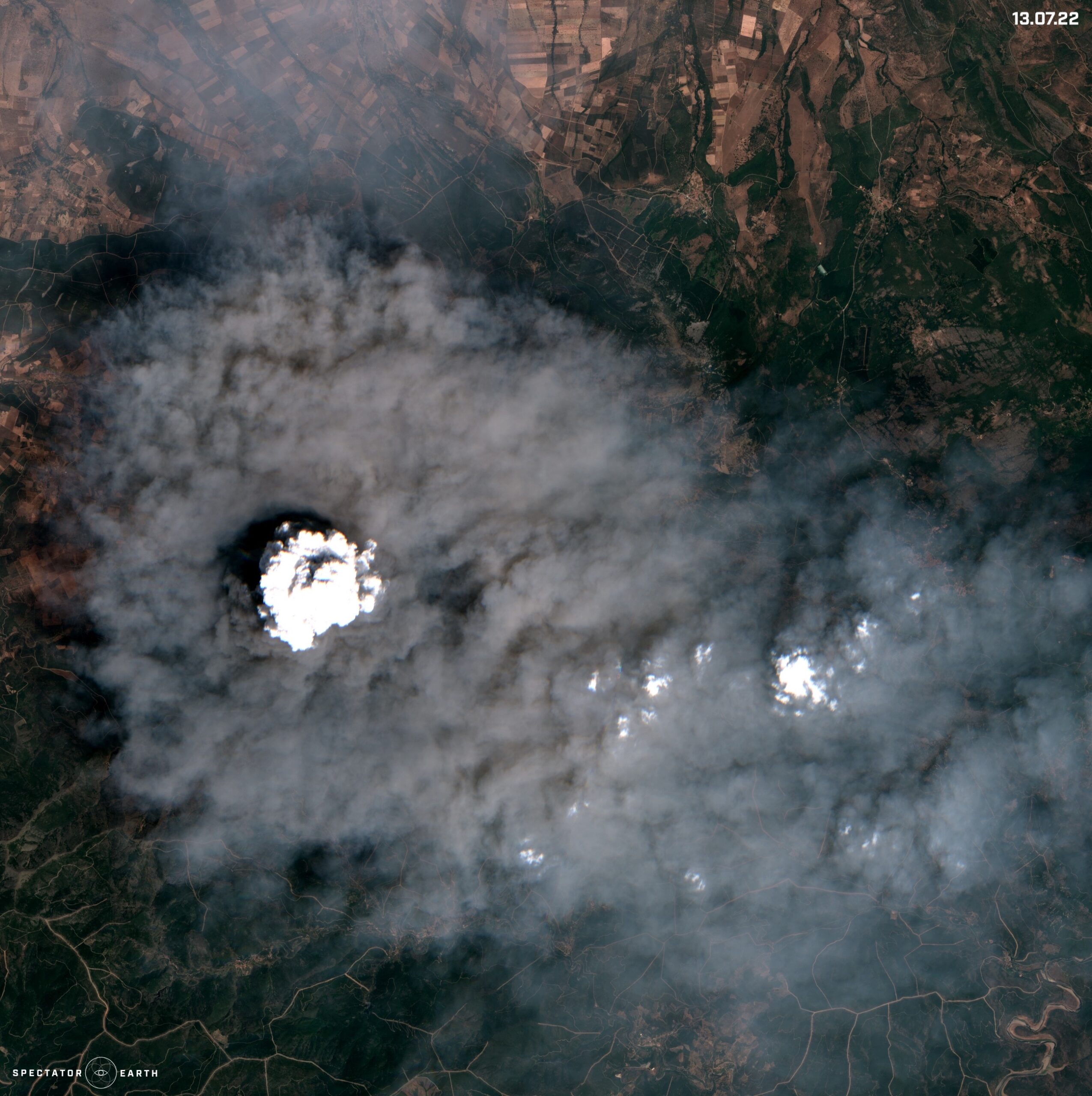 Great wildfire near Ladrillar in Spain – view on the map. 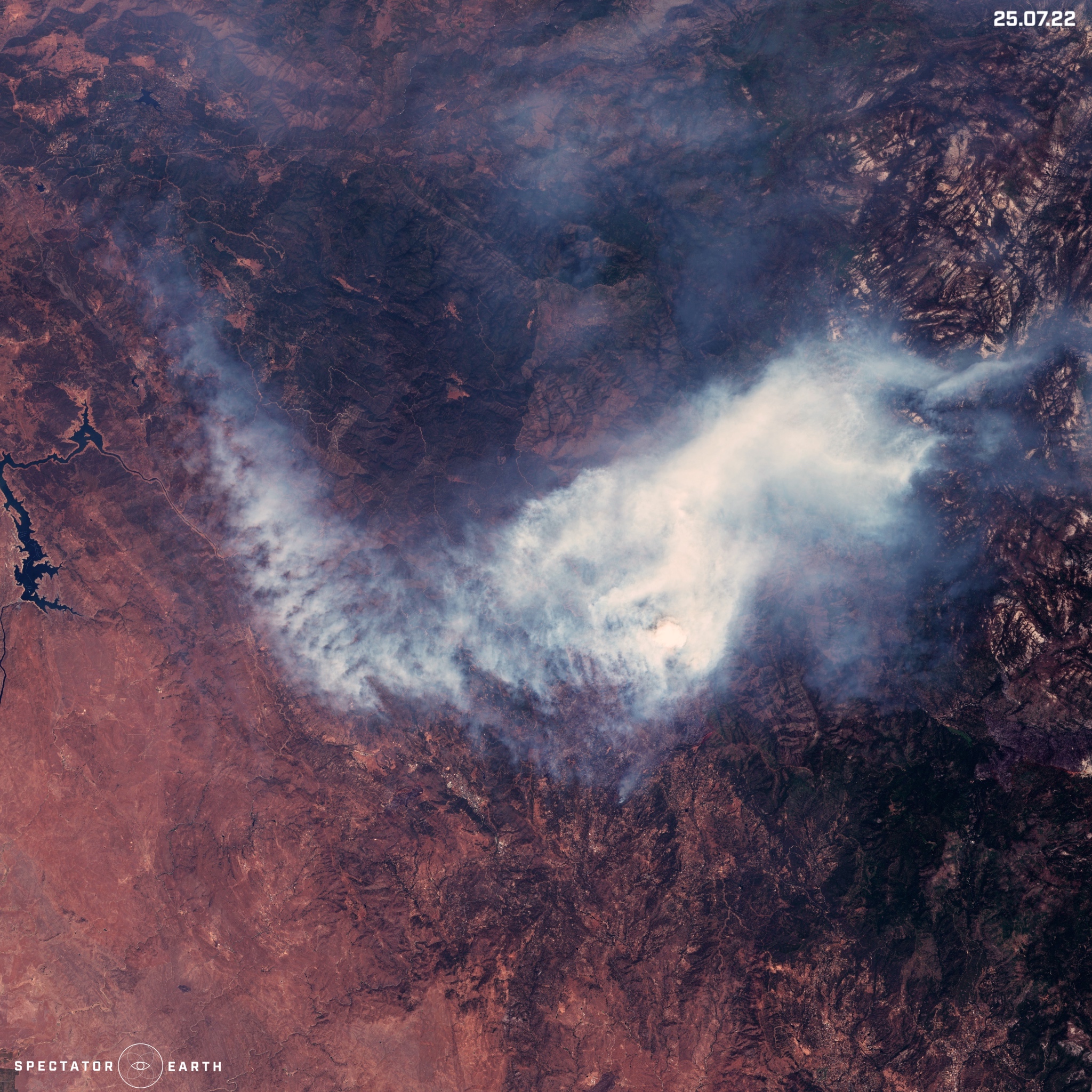 Oak Fire – the largest fire in California so far this year- view on the map. 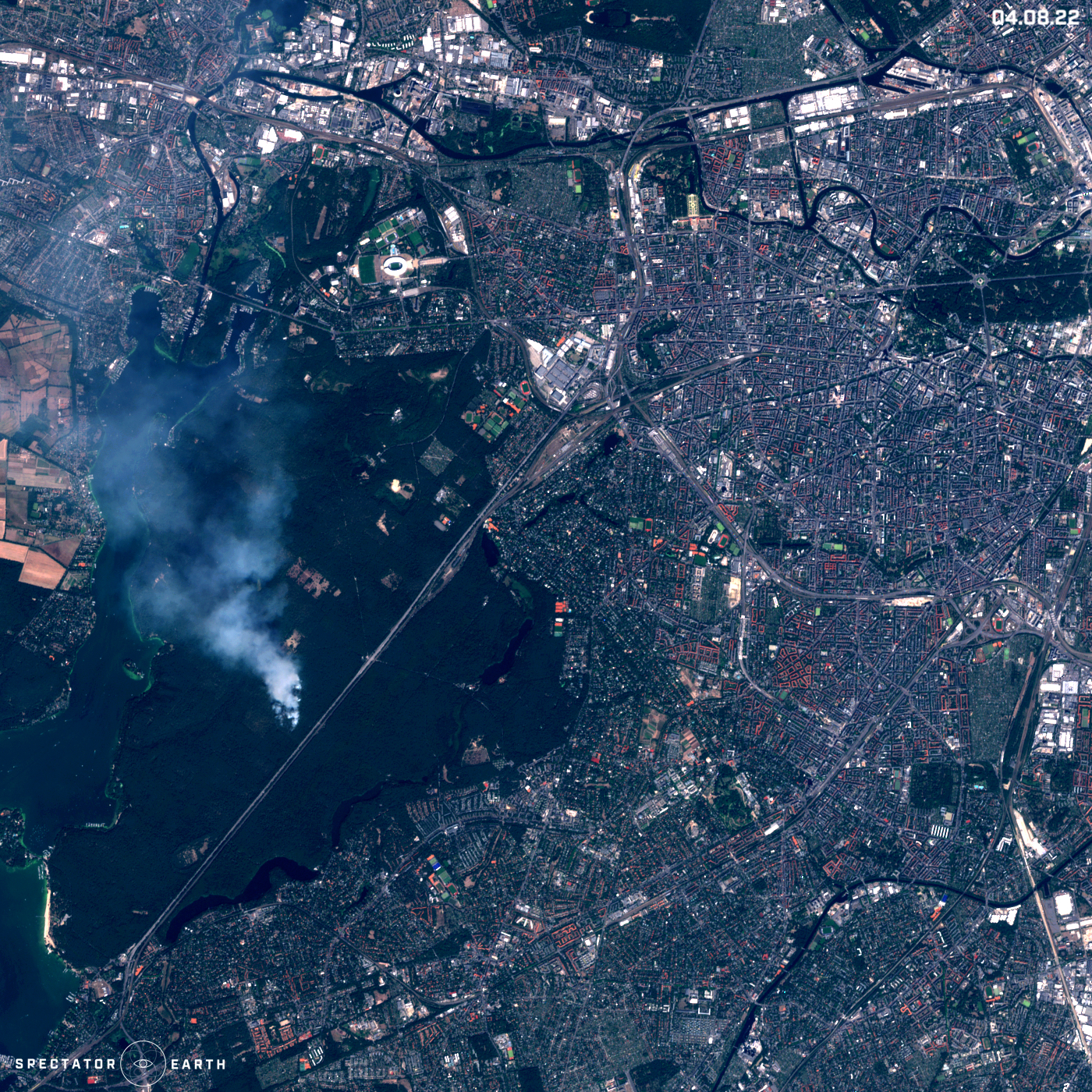 Satellite image of the fire in the Grunewald forest in Berlin – view on the map. 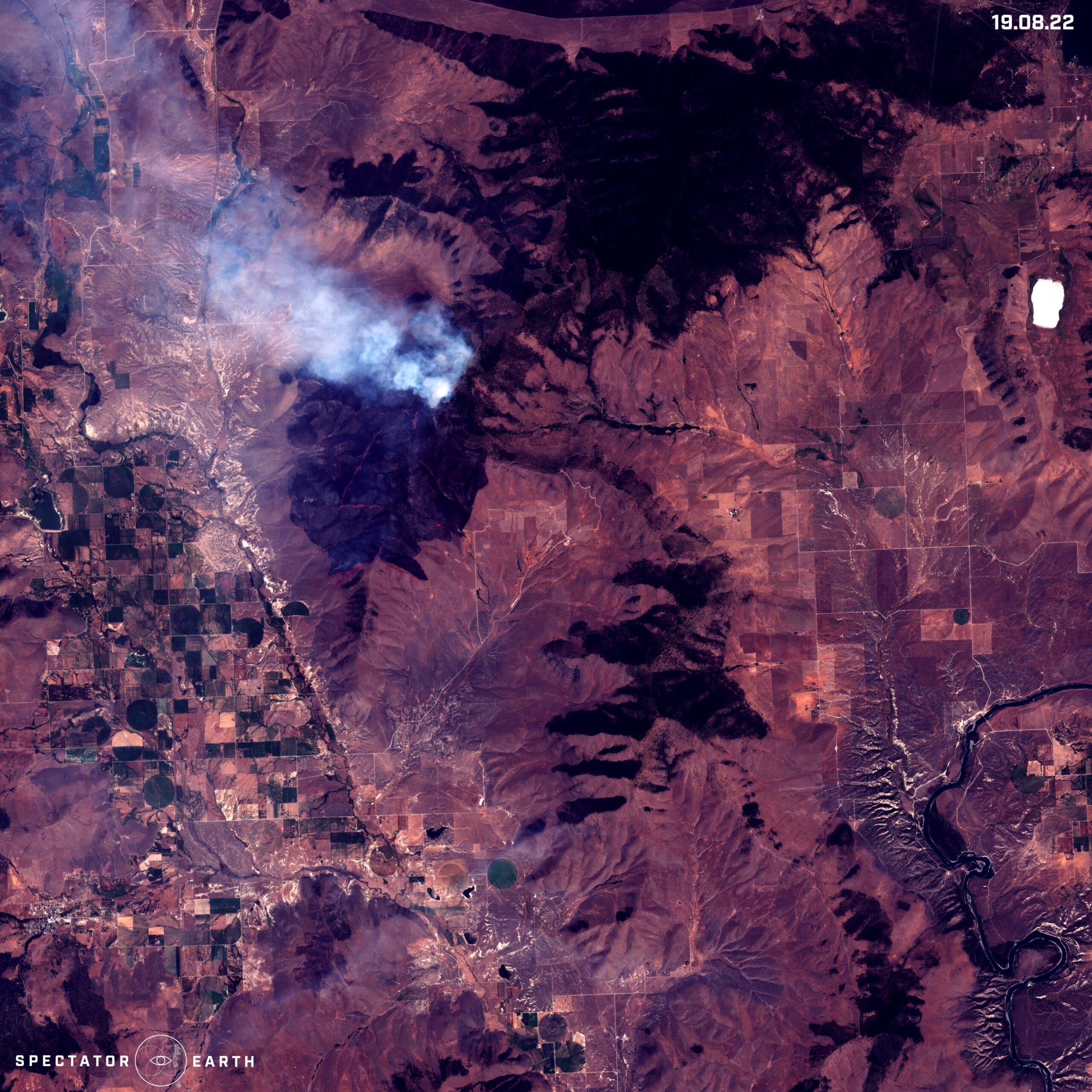 Garceau Fire near Polson in Montana US – view on the map.

Many believe that extreme droughts are another consequence of climate change, just like heavy but short rainfalls which are the cause of many floods right now. Countries struggling with this problem include Yemen, Russia, Thailand, Iran, Nigeria, and Sudan. Flooding has affected thousands of people in Sudan since the start of the current rainy season with at least 13 fatalities. Below we can see the satellite image of Guli in White Nile state, right before the flooding that struck on July 10th, damaging 65 homes. Another frequently talked about flooding happened in Pakistan this year, and is clearly visible even from the orbit. 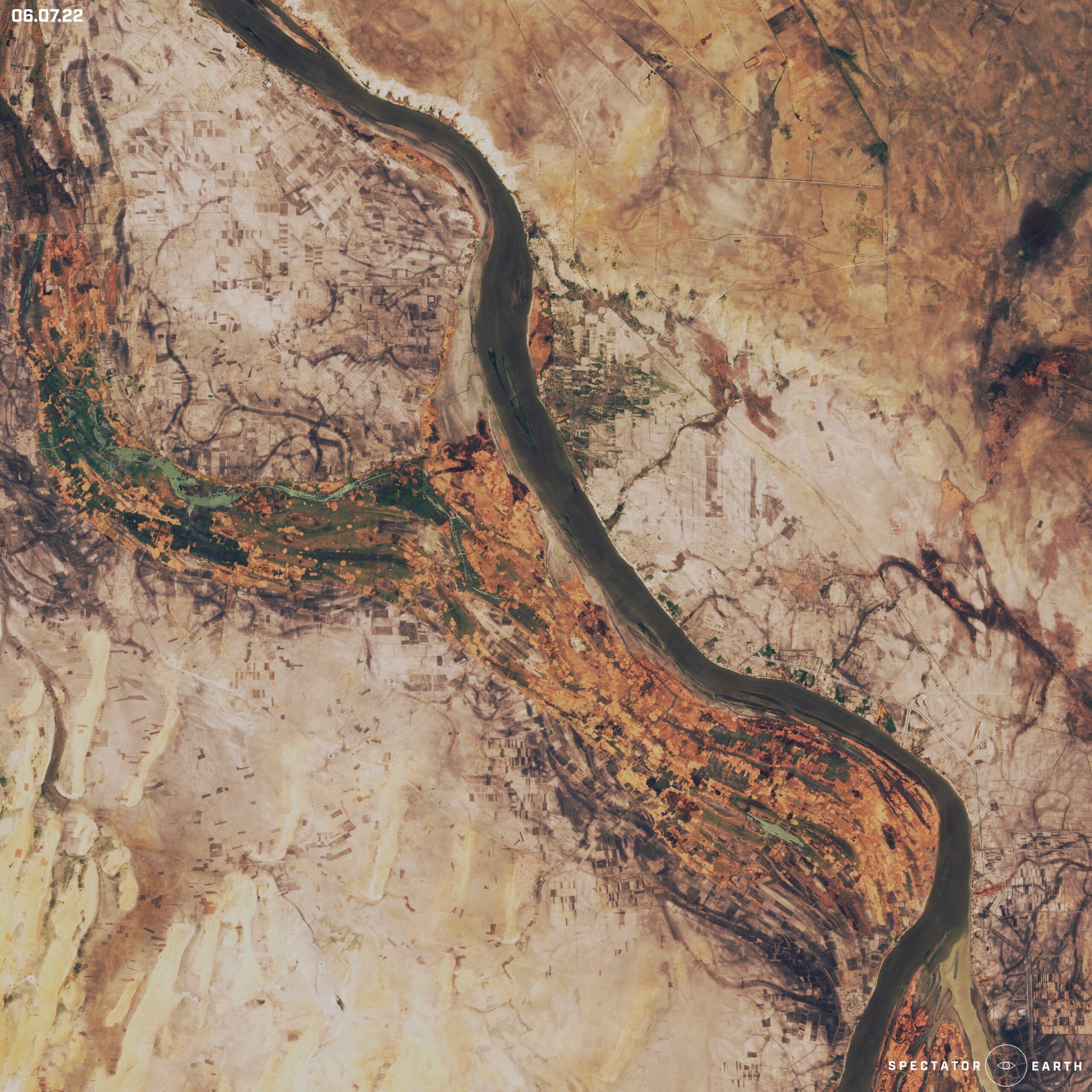 Sentinel-2 image of Guli right before the flooding that struck on 10 July – view on the map.

Floods in Pakistan visible in Hamal Lake area – view on the map.

It should be no surprise that the post-spring droughts all over the world have significantly reduced water levels. A great example of this may be Lake Mead – a reservoir in the United States, that is slowly, but surely shrinking. A similar situation can be observed at Lake Urmia in Iran. Satellite images show the slow process of drying of the body water, which was once the sixth largest saltwater lake on the planet. This summer as China was suffering from the drought, Yangtze River was running dry and still is because of the general shortage of water in recent years.

Here are the changes in Lake Mead observed over the last year – view on the map.

Yangtze River is running dry as China is struggling with droughts – view on the map.

Satellite imagery enables us to follow situations and events happening worldwide. Observations below include results of intense fighting in Sloviansk, near Izium and Energodar in Zaporizhia oblast in Ukraine, where military activity is especially dangerous, because of its close proximity to the Zaporizhia Nuclear Power Plant. Moving to more static objects, at Jiangnan Shipyard in Shanghai, we can spot Fujian – a Chinese aircraft carrier. Type 003 aircraft carrier is the first one to feature a catapult aircraft launch system. 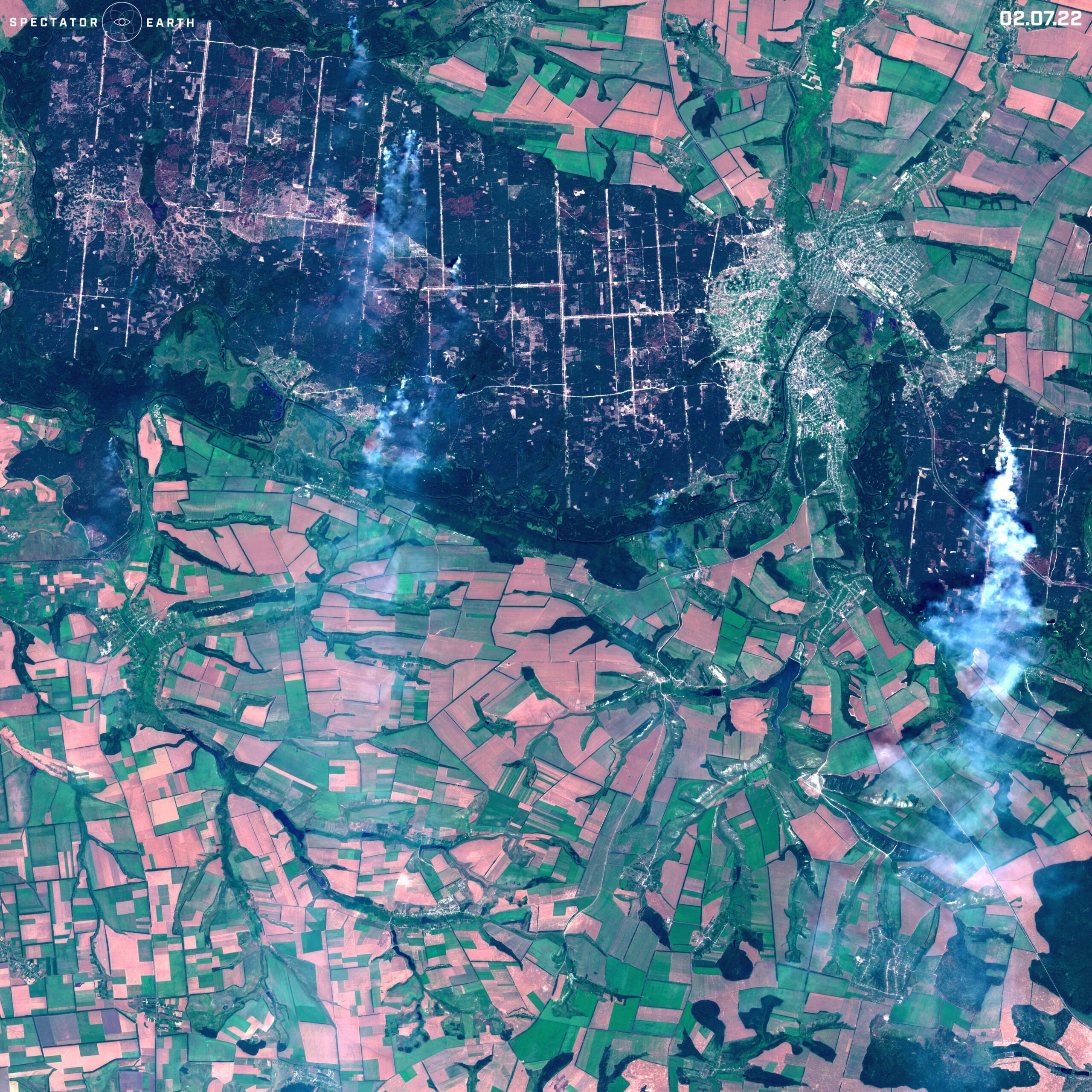 Fires are visible in the north of Sloviansk. Intense fighting continues – view on the map. 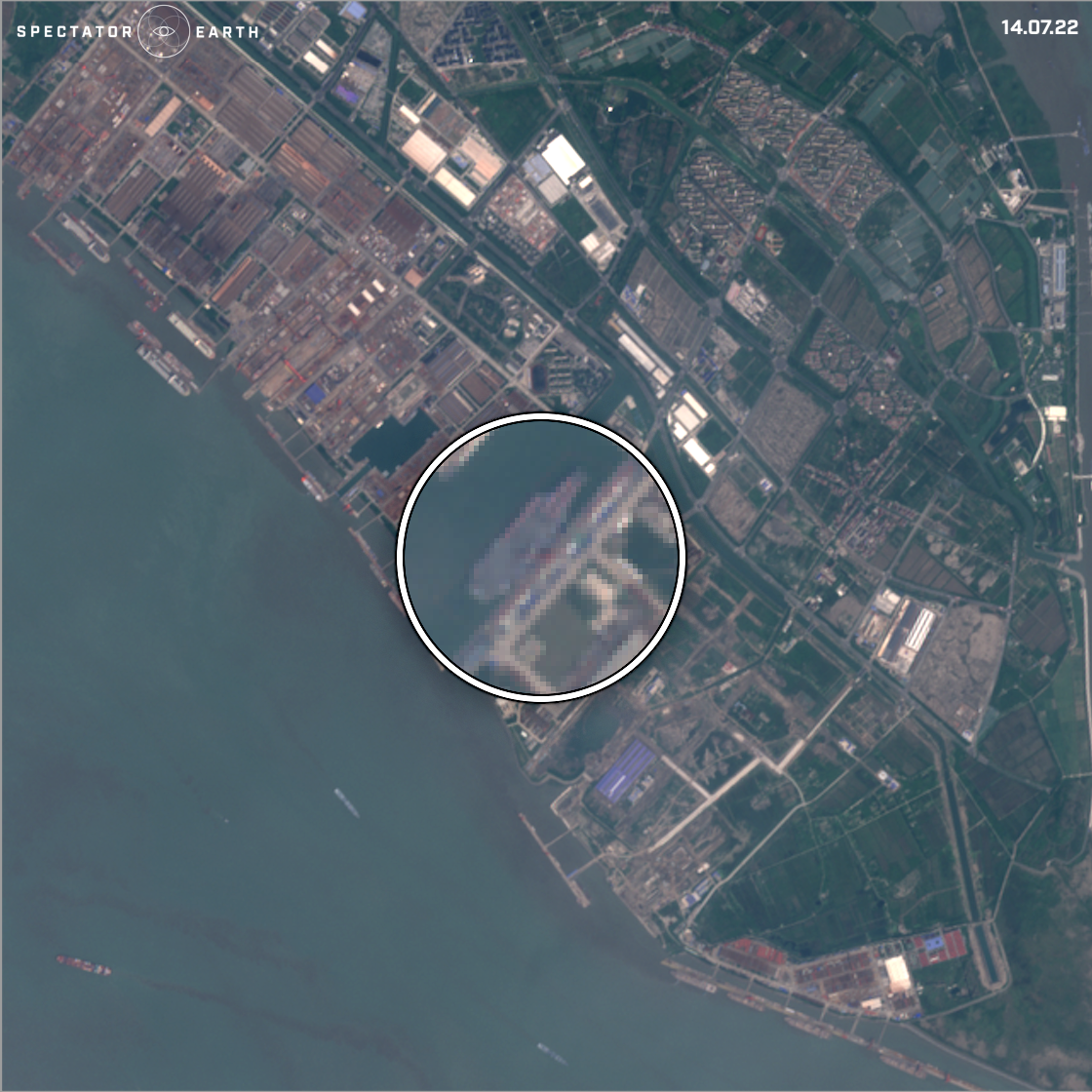 Sentinel2 image of the third Chinese aircraft carrier – Fujian – view on the map. 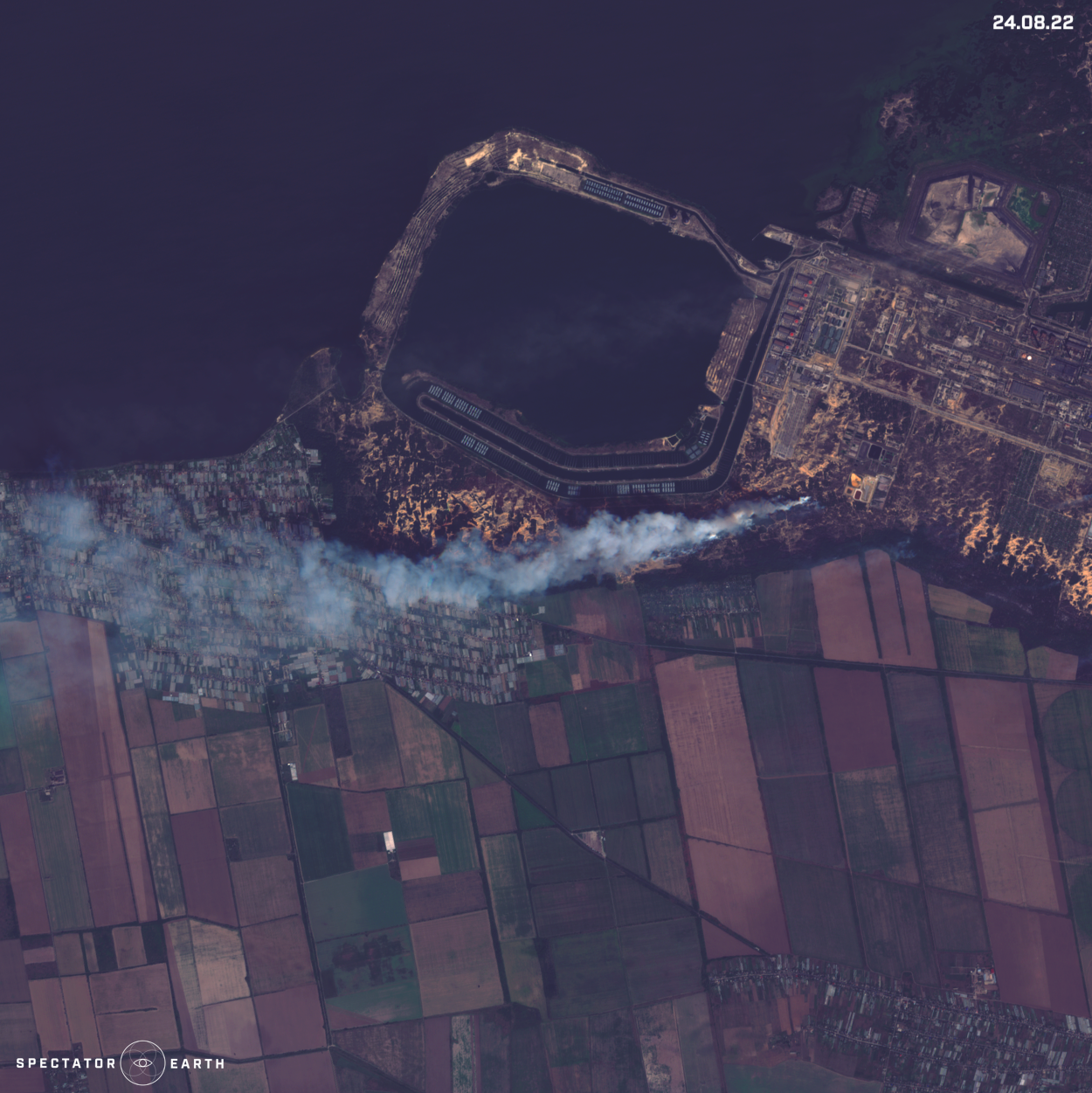 Visible fire in Energodar in Zaporizhia oblast – view on the map.