Star Wars fans, have you jumped into hyperspace on Google Maps yet?

With the last film in the Skywalker saga ending decades of storytelling, Google Maps has decided to do something special for Star Wars fans. Recognizing how traveling through the hyperspace is one of Star Wars’ most memorable visual effects, Google Maps quietly added the warp speed zooming motion to its planetary exploration feature sometime last week.

The animation shows up when you switch from Earth to other planetary bodies on Google Maps, as an eagle-eyed Redditor discovered. In case you have forgotten about the neat little space exploration feature of Google Maps, it was first introduced in 2017.

The first step to activate the feature is to switch to ‘satellite view’ on Google Maps by clicking the button at the lower-left corner of the screen. After that, you hop onto the right side to click the tiny ‘enable globe view’ button and zoom out until you reach the planetary view of Earth in space. At maximum zoom, a list of celestial bodies will pop up on the left. Click on any of the planets or moons and a Star Wars-like hyperspace animation will appear to take you to your destination at lightspeed!

Even if you are not a science fiction fan, the space exploration feature in Google Maps deserves your time and attention. It gives you the ability to wade through the icy plains of Enceladus, where water was found beneath the moon’s crust, or see how the methane lakes of Titan look like. Google also recommends exploring the massive crater of Mimas, adding “while it might seem like a sci-fi look-a-like, it is a moon, not a space station.”

Also see: The best collection of Star Wars maps ever!

Not just that, Google has dutifully labeled all craters, mountains, and plains – doling out information nuggets, such as how these places got their names when you click on different regions. Also, all the images are in 3D to allow you to decipher where the sun hits the surface of a planet or a moon.

So, what are you waiting for? Activate hyperspace drive now!

Trough of Disillusionment or Slope of Enlightenment: Where is drone industry headed?

Since 1995, global research and advisory firm Gartner, Inc has been releasing the ‘hype cycle’, a branded graphical representation identifying the current state of popular technologies while in their path to maturity. Like every other emerging technology, the unmanned aerial systems (UAS) sector too is believed to be following this cycle.

As per Gartner’s analysis, drones are 5-10 years away from reaching their ‘Plateau of Productivity’. However, as we witness 2019 in the rearview mirror, the essential question that haunts us is whether the industry is currently heading toward the ‘Trough of Disillusionment’ and how long before it reaches the ‘Slope of Enlightenment’? 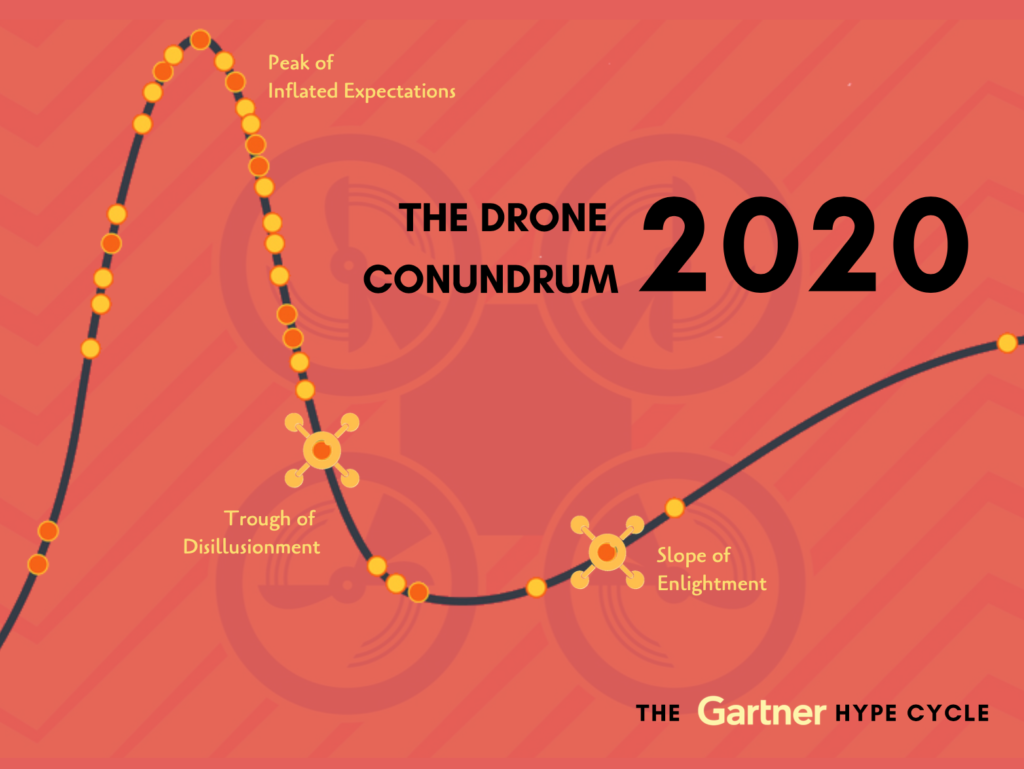 Once considered a futuristic technology and the most disruptive space, drones have attracted tech-enthusiasts to constantly innovate – be it in terms of rejigging the way we capture photographs and selfies while on a trip, the array of industrial solutions UAVs can cater to, medicine and package deliveries, or developing a complete, autonomous drone-in-a-box ready to be deployed with a simple click of a button. As a result, the technology has developed faster than the regulatory framework and policies that are essential for the implementation and deployment of these miniature devices. This has left the companies working in Drones-as-a-Service (DaaS) space thwarted in their operations.

Alongside slow economic growth and lack of a clear timeline on policies, this industry is also affected by having very low barriers to entry. With only a pair of drones and some cracked software in hand, anybody can easily start their own drone business, providing services and expertise which usually can only be achieved by rigorous experience in this field. With biting competition, businesses offering ridiculously low rates, and further lower costs of manual labor – especially in countries like India – there has risen an ambivalence in the adoption of the technology in commercial space.

In an industry where the output is in the form of spatial data – judged by quality and not quantity – and data that acts as ‘evidence’ influencing decision-making, by the time the client realizes that the results are unsatisfactory, too much precious time and effort has already been invested for the project to be redone. Other setbacks are witnessed in the form of the ruling political party being voted out or tech-savvy decision-makers getting transferred to other departments.

But then, why does everyone still want to be in the commercial space? The sale of recreational/consumer drones which saw a near explosion in 2016 and 2017 was found to be slowly plateauing and declining in 2019. Afterall, there is a limit to the number of rarely used toy drones one can purchase. Even companies with the largest market share from sales of such drones were found to steer themselves toward commercial and agricultural drones and partnering with companies to improve the efficiency of commercial drone use.

Consultants, major tech corps, construction giants have all created a separate UAV division providing industrial solutions. Not a single day goes by without my LinkedIn feed throwing up a unique solution wherein drones and their plug-and-play sensors, powered by artificial intelligence, have helped streamline some business or vertical, created a social impact, or in short, solved a real-world problem.

Be it the traditional volume estimations and stockpile measurements in mines and construction sites, improving conditions and decision-making in smart cities through surveillance, modeling and base maps, identifying and improve nutrient content in soils and plants, mosquito eradication in lakes to counter dengue menace, inspecting and providing automated custom reports for solar panels, windmills, pipelines, transmission towers and lines, and flare stacks without shutdowns. And these examples are just a drop in the bucket of solutions drones can cater to. Each government department or client I interact with has some unique use-case they wish to solve with the power of drones.

It can be said without a doubt that the industry, as a whole, is bound to flourish and while I completely believe in the impact this technology can bring to n-number of business verticals, I wonder: Is the drone industry prepared for the turbulent times ahead?

The need of the hour is transparency and synchronous data infrastructure to avoid redundant captures. It is essential for those working in this industry to collaborate and regroup around businesses and societal problems, prioritizing use cases upon achievability and not attractiveness. What do you think?