Today I found this interesting podcast from Inbound Now with a guest Aaron Strout – co-author of Location Based Marketing For Dummies. It’s really worth watching:

What can we learn from LBS market forecasts? 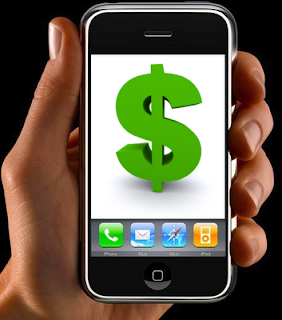 This year I’ve seen release of several LBS market reports and forecasts:
– Berg Insight
– Pyramid Research
– Strategy Analytics
– IE Market Research Corporation
– ABI Research
and other… of course like most of market reports they are massively expensive for an individual (starting from  €1500) but each of the companies provides more or less detailed summary, so:
What can we learn from them?
First of all that if there are so many new LBS market reports it means that there is the demand for it.  If companies are investigating the industry it probably means that they want to enter it. The market of location-based social networks (4SQ, Gowalla, FB Places, Twitter), and of GPS navigation is already saturated but there is an increasing need for a local search, local information, local news, local entertainment… consumers are getting spatially aware and so is the web. Significant part of web content is already geo-tagged. In fact some scientists say that web 3.0 is not semantic… Web 3.0 is spatial.
But let’s get back to the numbers. Most of disclosed data is pretty limited but it is possible to derive some knowledge out of it. 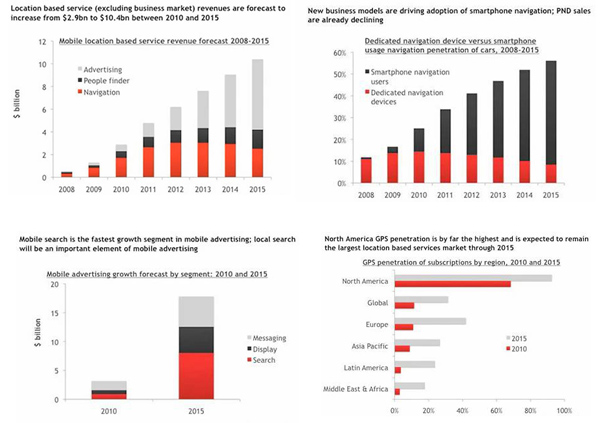 We can see here that according to Pyramid Research B2C LBS market will grow from around $2.9 bn to $10.4 bn. Until 2012 the biggest growth driver will be navigation but from 2013 advertising will start bringing the highest revenues. The report highlights that sales of major GPS navigation providers like TomTom or Garmin is flattening. The competition in this sector is really intense especially when Google and Nokia are changing the business model from payment to advertising-funded. This is shifting revenue stream from navigation pool into advertising pool. We can see as well huge predicted growth in mobile advertising (from around $4 bn to $18 bn) and from the first graph it can be estimated that location-based marketing will account for around $6.5 bn out of it.
Moreover we can learn that smartphone will be the major navigation device and by 2015 dedicated PNDs will be account for less than 10% of the market and their sales is actually already declining. GPS enabled mobile phones penetration is forecast to achieve almost 100% in US due to E911 regulation  and in Europe this number will be close to 50% which is as well promising from LBS industry perspective.

ABI Research forecasts that US location-based analytics market is set to overcome privacy concerns and grow to reach $9bn in value (not revenues!!!) by 2016. It is very optimistic prediction but in fact it’s probable as the analytics are the core provider of value in location-based advertising. The aggregation and analysis of location information to identify trends will enable new services and more effective advertising. Just to clarify it is important to state here that market value (the market capitalization plus the market value of debt) is something else than market revenues.

IE Market Research Corporation – the Canadian-based provider of market intelligence released their 4Q 2011 LBS and GPS market report. The only free information that they provide are: “global market for GPS navigation and location-based mobile services to rise to $15.2 billion in 2016, a CAGR (Compound Annual Growth Rate) of 22.7%”. First of all by $15.2 bn they mean ‘total spend’ which is similar to ‘revenue’. Than knowing revenues from 2016 and CAGR we can derive that they are predicting 2011 revenues at a level of $5.6 bn. And that would be all…

Thankfully they are revealing some more information in their 2010 report and youtube video. In 2010 they have forecast that the market will rise up tp $13.4 bn in 2014. 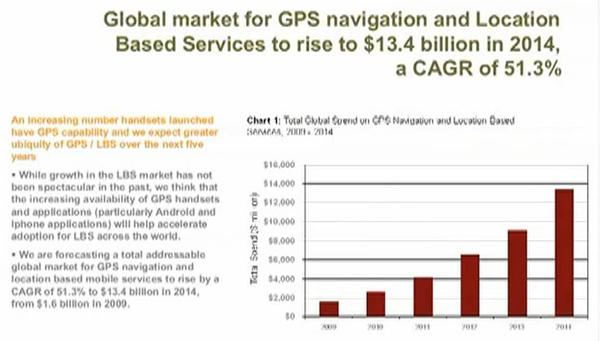 Comparing numbers from 2010 and 2011 we can observe that they are much less optimistic this year. In the table on the left I have compared both forecasts based on CAGR. We can see that when assuming stable growth rate, this year report predicts in 2014  $3.2bn less revenues then last year.

In the information revealed from 2010 report we can find again that they are forecasting massive growth of location-based marketing. Nizar Assanie, Vice President at IEMR said: “The future of GPS navigation and location-based services is definitely in Location Enabled Search and Advertising. Location Enabled Search and Advertising will see the biggest growth in terms of market spend, growing at a CAGR of 131% over the next five years to reach $5.9 billion in 2014”.


Berg Insight brings data about the European market. After a little bit of digging on the company’s website I was able to find reports about European LBS market from three years in a row.

We can observe that Berg Insight was very optimistic in 2009. The company has forecast that after €214 mln in 2008, the following year will bring around €300 mln and will grow up tp €580 mln in 2014. It was a beginning of LBS not offered by mobile operators in Europe. The adoption of Location Based Social Networks was still very low. In 2010 the report verified over-optimistic predictions from the year before. The found out that in 2009 the LBS revenues were at the level of €220 mln. The market growth was minimal and Berg Insight was significantly wrong, that is why in 2010 the company was cautious and has forecast market to slow down and to reach the level of €420 mln in 2015. The latest report released just couple of day ago seems to prove the predictions. In 2010 the European market achieved €205 mln and is forecast to grow up to €435 mln in 2016. In North America, revenues are forecast to grow from US$ 620 million in 2010 to an estimated US$ 710 million in 2016.


Finally the report of Strategy Analytics that managed to reveal the least number of information of any kind.  The forecast states that consumer and advertiser expenditure on LBS will approach $10 billion by 2016, with search advertising accounting over 50 percent.


What can learn from all those reports?
Knowing the industry we can easily say that the number of LBS users was growing every year. Despite that the revenues were growing very slowly and were significantly overestimated. Why is that? Although LBS are gradually achieving mainstream market acceptance there is still lack of profitable business models to monetize growing number of users. Google, Nokia and popular Location-Based Social Networks like Foursquare or Gowalla accustomed users to free services. To monetize it developers and provider are shifting LBS business models to freemium and ad-funding. There are however still several issues that need to be resolved including user privacy and geo-data pricing.

Advertising as a revenue and market value driver was mentioned in all of the reports. It significant role in the LBS market will start growing in 2012 and will probably reach in total much more than 50% of revenue stream. Parallel there will be whole new market for location-based services and marketing analytics as the companies will have to measure the rate of success of location-based ad campaigns.

From the other hand we can observe that operators are continuing to lose control over location information with the growth of GPS. In 2008 operators gained around 80% of all LBS revenue. Although now they are getting less than 50% of whole revenues the market has grown more than fivefold so they are still better off. The important question for the future is whether operators will use market opportunities to gain a bigger slice of this cake.