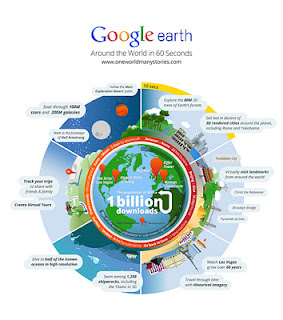 “Today, we’ve reached our own one billion mark: Google Earth has been downloaded more than one billion times since it was first introduced in 2005.” – we can read on Google Earth blog. It’s undeniable that Google changed the face of modern cartography and GIS. 6 years ago it was not that obvious but right now there are few who wouldn’t agree with it. The way how people became concious about the spatial aspect of life is reflected in number of geo-visualization (geoviz) web services like Geocommons or ArcGIS online but as well in ingratiation of mapping GIS solutions in many ERPs and other business IT products.

Google Earth is not only very impressive but also very practical. With KML (Keyhole Markup Language) every computer geek in the world is able to produce content, add and analyse geographic data in a fairly easy way. (check this link).

“We’re proud of our one billion milestone, but we’re even more amazed at the way people have used Google Earth to explore the world,” wrote Google Earth and Maps vice president of engineering, Brian McClendon, on Google’s blog.

At Google’s new OneWorldManyStories website, the company has collected stories from people worldwide about how they have used Google Earth “to follow their dreams, discover new and distant places, or make the world a better place,” McClendon said. 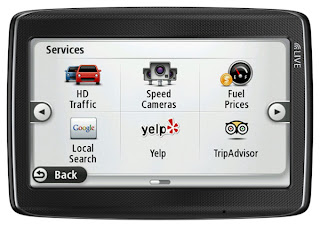 Announced on  Aug 29th 2011, TomTom’s Go Live 1535M now expands to Canada.This model offers you dashboard tweeting and access to Yelp‘s recommendations. There are several useful things in there: first of all HD Traffic that is already working in 22 countries and users love it. There are Fuel Prices that help you to locate the lowest priced fuel on your route or in your area. There is Trip Advisor and Expedia to help you find and book a hotel, finally there is even a Google Local Search.

Is it really needed?
There is one major question that comes to my mind when I look at this functionality:


Why the hell would I use twitter and yelp while driving a car?

When I want to use apps like this I stop my car and use my smartphone. But… there are couple of answers to that question:

Who knos, maybe soon similar solutions will be available in build-in car navigation systems. But there is one problem Go Live 1535M is using GPRS connections to get data from the internet and it is already being phased out in some parts of US. The idea is cool. Let’s hope that it’s going to evolve in the right direction.
source: TomTom