From the whole Geoawesomeness Munich event team, we wanted to thank you all again for coming out and joining us at the event on June 9th in Munich at Wayra. After 2 years of distancing, we had so much fun seeing everyone in person once again. To us, it was a celebration that we have made it through a few waves of corona and the spirit of the community is still here and hungry for more pizza, beer, and meetups!

We heard from a full lineup of speakers that evening, where the theme of the event was AI and Earth Observation. We started with a highly technical yet fascinating topic from TUM PhD candidate Zhaiyu, all about his own algorithm for improving and smoothing 3D building construction from LiDAR using deep implicit fields. Secondly, we welcomed Anna Brand, Remote Sensing and GIS Expert at RSS GmbH to discuss the clever way her company uses earth observation and deep learning to help identify and clean up plastic debris which ended up in rivers in Italy. Thirdly, we heard from Ororatech’s Remote Sensing Lead Dmitry Rashkovetsky, who spoke about the company’s EO AI technology to help quickly identify wildfires in Australia and the implications of wildfires on climate change. Lastly, Dr. Manfred Krischke of Cloudeo AG spoke about his work in the EO industry from the push to create the first privately funded satellite mission ever, RapidEye, to his current geospatial marketplace company, Cloudeo.

The speakers came from a range of technical and professional backgrounds, which led to a lively panel discussion with questions from the audience. Topics ranged from technically challenging calibration of deep learning algorithms, to views on where the industry is headed more broadly in the next few years. Thank you again to all the speakers for sharing your work with your peers!

The best part (in our opinion) about the meetups is the people. We were delighted to see so many faces at the event and afterwards for networking. It is clear from the amazing turnout that the geo community in Munich is alive and well (and hiring!). In total, there were more than 50 of you who were in attendance! “It is so nice to see so many young professionals excited about geospatial,” said a refreshed Dr. Manfred Krischke, CEO Cloudeo AG. With all the new updates from the last 2 years, there was so much to talk about and catch up on.

We also owe a huge thank you to our sponsors RSS GmbH, who graciously provided the beers and pizza, as well as Wayra for the wonderful event space. You can check out more information about them at https://rss-gmbh.com and https://www.wayra.de. Thanks are in order also to Muthu and Aleks for their continued support.

If you couldn’t attend this one, have no fear! We hope you will join us again for the next one, so stay tuned for updates on our next event and join the Munich Geoawesomeness Community on https://www.meetup.com.

Say thanks for this article (3)
Sara McKay
1 posts
Want to be an author?

Members of the Geoawesomeness community who are active on Twitter may have come across #fridaygeotrivia, a twitter-based geospatial trivia contest organized by OpenCage – makers of the OpenCage Geocoding API – on the final Friday of the month. It’s a light-hearted, enjoyable way to let off steam before the weekend while learning interesting geo facts.

Here are some examples of recent questions the “players” face: “list countries named after people”, and “name countries that border at least eight other countries”.

The game takes place in real-time on Twitter, and is fast-paced and competitive as players race to show off their bit of obscure geographic knowledge. I had a chat with OpenCage founder, Ed Freyfogle, who organizes the monthly contests to learn more. 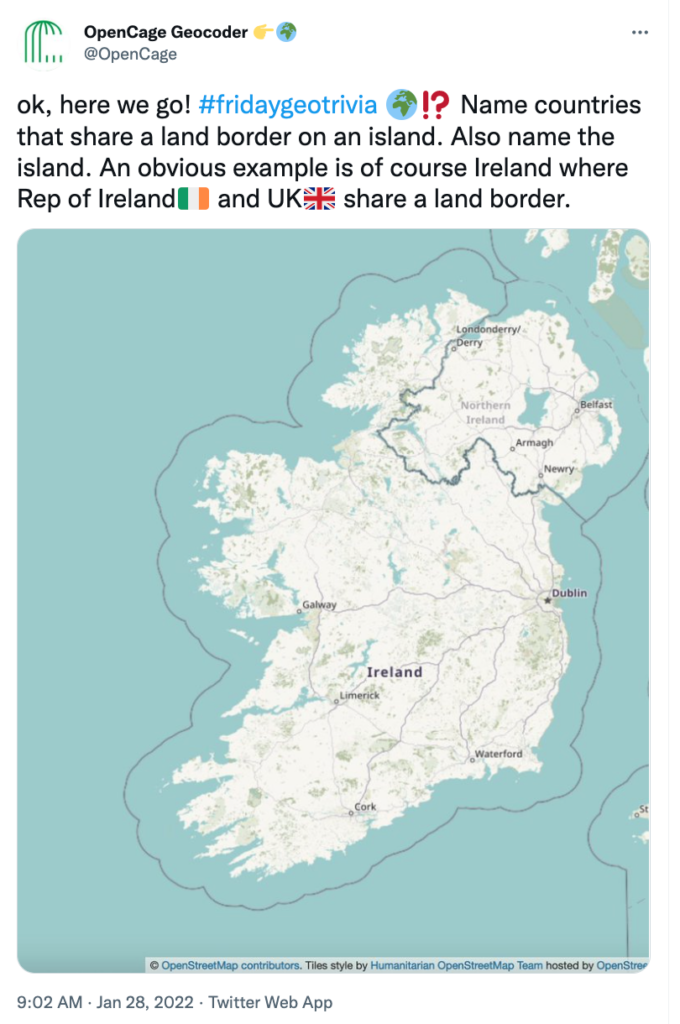 Muthu: Ed, thanks for taking the time to chat with us. What is Friday Geo Trivia? How does it work?

Ed: Friday geo trivia is a way to have fun with geospatial. In the age of remote working and home offices it’s an attempt to create the kind of chat you might have at the pub on a Friday afternoon before calling it a weekend.

The idea is conceptually simple: we pose a geo trivia question and people post their answers as fast as they can. The key is it is a single question that has multiple answers, so usually lists of countries. There is then one master twitter thread with all the correct answers. Answers have to use the #fridaygeotrivia hash tag and emoji country flags.

What makes it fun is that people from all over the world are chiming in and racing to come up with answers, and of course the questions often reveal obscure geographic edge cases. After about an hour we declare a winner, and head off into the weekend. The answer is then posted on our blog, you can see all the past questions (and answers, though they are hidden until you choose to reveal them).

Ed: Anyone who wants to! The goal is just to have some fun. Some of the players work in the geospatial industry, but many (including some of the best players) don’t. Anyone can chime in, and one of the joys of the game is that it’s very international. We have a few regulars, but also new people dropping in each time.

Muthu: How do you come up with the questions? Any favorites?

Ed: Honestly it’s not so simple to craft a good question. It needs to be a question without a single definitive answer, it needs to be something that is a list, usually a list of countries. And obviously it can’t be too easy or the game is over too quickly. Ideally there are some unexpected answers or edge cases that make people say “oh, interesting, I didn’t know that”.

My favorite question remains asking for countries that have the same two-letter ISO codes and US postal system state abbreviations, for example “CA” is the code for both Canada and California. There are far more than you might suspect.

Often the questions come from situations we experience in running the OpenCage geocoder. This is a great example, if someone searches for “CITY NAME, CA” do they mean California or Canada?

Muthu: Is using Wikipedia or Google or maps allowed? How do you prevent cheating? Can’t people just search for the answer?

Ed: You can use maps, but you can’t just google for answers or look them up on Wikipedia. If you do that is cheating and would be really lame and you will suffer from terrible geokarma for some time to come. But yes, given the stakes of the contest and the prizes, there is a major temptation to cheat. We rely on the honor and competitive spirit of the participants.

Muthu: That raises a good point, what exactly does the winner get? Is there a prize?

Ed: Yes, the prize is the bragging rights of being the winner, which is highly esteemed. That said, we’re all winners due to the gained knowledge and fun. The #fridaygeotrivia journey is the destination. Nevertheless, I think we might start sending the winner a t-shirt or a hat or something.

Muthu: When is the next #fridaygeotrivia? If someone is interested how do they join in?

Ed: It is always on the final Friday of the month, though we post a placeholder blog post on the OpenCage blog a few days beforehand with the exact time. We are based in Europe, so it is usually in the European afternoon. We have experimented with a few different times, we are trying to make it easier for our friends in North America to join in. At the specified time we then post the question on the blog and start a thread with the question on the @OpenCage Twitter account. Then people start answering as fast as they can. To get full credit you need to use the #fridaygeotrivia hashtag and the emoji flag of the country.

My one bit of advice for new players is to focus on the learning and having fun, that’s the goal of the game. Sometimes people get a little too fixated on lawyering the question. That’s not fun. Also, for the avoidance of all doubt, you are definitely allowed to drink alcohol while playing, though it may slow your typing.

We hope to see you at the next #fridaygeotrivia!