Apple acquires HopStop and Locationary: “Mapping” it’s way out of the maps issue? 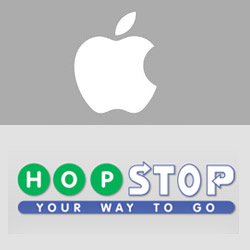 Apple and Maps! Well, it surely doesn’t bring nice memories with the way Apple Inc handled the roll out of Apple Maps few months ago. But since then, they have been trying to plug the holes and get seriously about being a competitor to Google Maps and Bing Maps! Have they been successful? If not, what do they need to do?

One of the experts who knew what needed to be done by Apple Inc to fix their Map woes penned an article titled “5 Big Map App Issues that Apple must solve“. Wondering who that expert was? The CEO and Founder of Locationary – a crowd sourced location based listing database. A year later after Grant Ritchie, CEO and Founder, Locationary penned that article, the company was acquired by Apple (few days back)! Looks like someone at Apple reads their news 😉

They didn’t stop there, today Apple announced the acquisition of  another “mapping/location” company HopStop; an online transit – navigation app.

What does these acquisitions mean for Apple? and more importantly is it going to improve Apple Maps?

I believe so and here’s why.

Locationary basically is in the spot light because of their data exchange and management platform – Saturn. Saturn can be used to collect, merge and verify listing of all local businesses and points of interest. Pretty much like the Yellow Pages, expect that it is better like  and more importantly the online spatial version of it. Saturn is going to make sure that the next time you search for “Chinese Restaurant, Gandhi Road” Apple Maps is not going to show the one that’s geographically miles away from where you intended to look. More importantly, Saturn and Locationary can help ensure that the listing is not only spatially accurate but also temporally i.e. the restaurant is still active and open for business.

HopStop provides a cool and green way of traveling by using the public transportation system. HopStop has over a million monthly active users around the world that use HopStop to plan their navigation using the public transit. In fact, HopStop also provides users Biking, Walking and taxi options. Apple will get a navigation make-over by incorporating HopStop into their navigation algorithm/platform. Fundamentally this solves the Apple’s Map need for a navigation algorithm that uses data (accurate data) from public transit systems.

Apple Maps still has some distance to cover before it can redeem itself but if the acquisition of Locationary and HopStop are an indicator of what’s in store, then I’m sure they can go the distance! Bottom line, Apple acquires HopStop and Locationary – way to go!

Foursquare started ads after you check-in

Foursquare has been testing ads for sometime already. Last year the company introduced promoted updates, which operated much like Google AdWords. The sponsored posts would show up when users searched for a place to go, and advertisers would pay Foursquare if users clicked through. But this was not the end. Last months we’ve been reporting that Foursquare started testing their paid ads with a few businesses in NY.

Well it seems that the tests went well… This week 4sq officially launched location-based ads. Are you afraid that they will become a second Facebook, which is pushing ads to the limits? It’s actually not that bad. 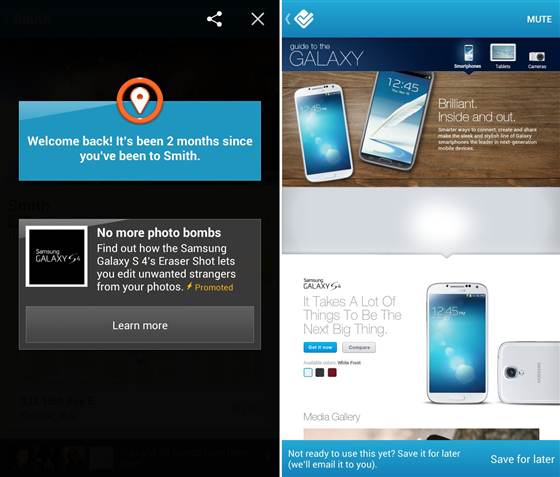 The ads pop up immediately after you check-in to a location similarly to unlocking a special or earning a 4sq badge. On the example above you see that there is nothing scary about it… just a Samsung Galaxy geo targeted ad;). One of the first brands to take advantage of this possibility is Captain Morgan’s rum. You will be targeted with a rum ad when you check-in a bar. If the place participates in the promotion you will receive e.g. 20% off your rum cocktail.

This is actually not that annoying. Let’s just hope that Foursquare will not follow the way of Facebook.