A new study program is an answer to the needs of modern engineering which drives the development of technology, including systems of mobile mapping and navigation. The program is planned to last 3 semesters and includes specialized knowledge in the fields of geodesy and navigation, photogrammetry, cartography, spatial information systems and geo-informatics. The main goal is to educate specialists in the design of LBS applications for mobile measuring platforms utilising photogrammetry and remote sensing sensors, positioning and orientation systems and spatial data processing. The studies are conducted in English for students from around the world.

The offered subjects in the area of data acquisition include Mobile Mapping Technologies, Modern Photogrammetry, Positioning Systems, as well as Reference Systems for Navigation, Satellite Navigation Systems and Indoor and Outdoor Navigation. The majority of subjects is strongly connected with algorithmic and application development and is formed by subjects like Programming Language Learning, Algorithms of Navigation Applications, Image Recognition and Deep Machine Learning, Intelligent Transportation Systems and Autonomous Cars, Simultaneous Localization and Mapping, Spatial Analysis and Big Data Mining. There is also a group of subjects connected with visualization and modelling, which includes: 3D Data Processing and Modelling, Augmented Reality, Computer Vision, Mobile and Navigational Cartography. This curriculum is intended for first-degree graduates from the fields of Geodesy and Cartography, Geomatics, Geo-technology, Geo-informatics, Navigation, etc. The first edition of the program will debut in February of 2020. The official recruitment will begin in November/December of 2019. The recruitment information can be found on this web page: https://zk.gik.pw.edu.pl/mmns/Admissions-and-Contact

The development of mobile mapping and navigation technology presents new challenges and opens up opportunities of its use in systems of autonomous navigation i.e. Unmanned Aerial Vehicles (UAVs), autonomous vehicles or indoor navigation systems. This creates new job opportunities and a need for education in the field of design and acquisition, processing and sharing spatial data with the use of mobile platforms. We have invited experts and trainees from the leading companies in Poland and academic institutes in Europe from different fields including mobile mapping, photogrammetry, cartography and navigation. For more information on this program visit this page: https://zk.gik.pw.edu.pl/mmns.

Say thanks for this article (0)
Darek Gotlib
2 posts
Want to be an author?
The community is supported by

This is the first global map of solar and wind farms

As they push for a lower-carbon future, governments around the world are fueling the rapid expansion of renewables. And yet, if you wanted to see where the current solar or wind infrastructure is located, the lack of accessible information out there would leave you stumped. That changes now.

For the first time ever, researchers have mapped the global locations of major renewable energy sites, giving a clear indication of both the infrastructure density in different regions and approximate power output. Behold: 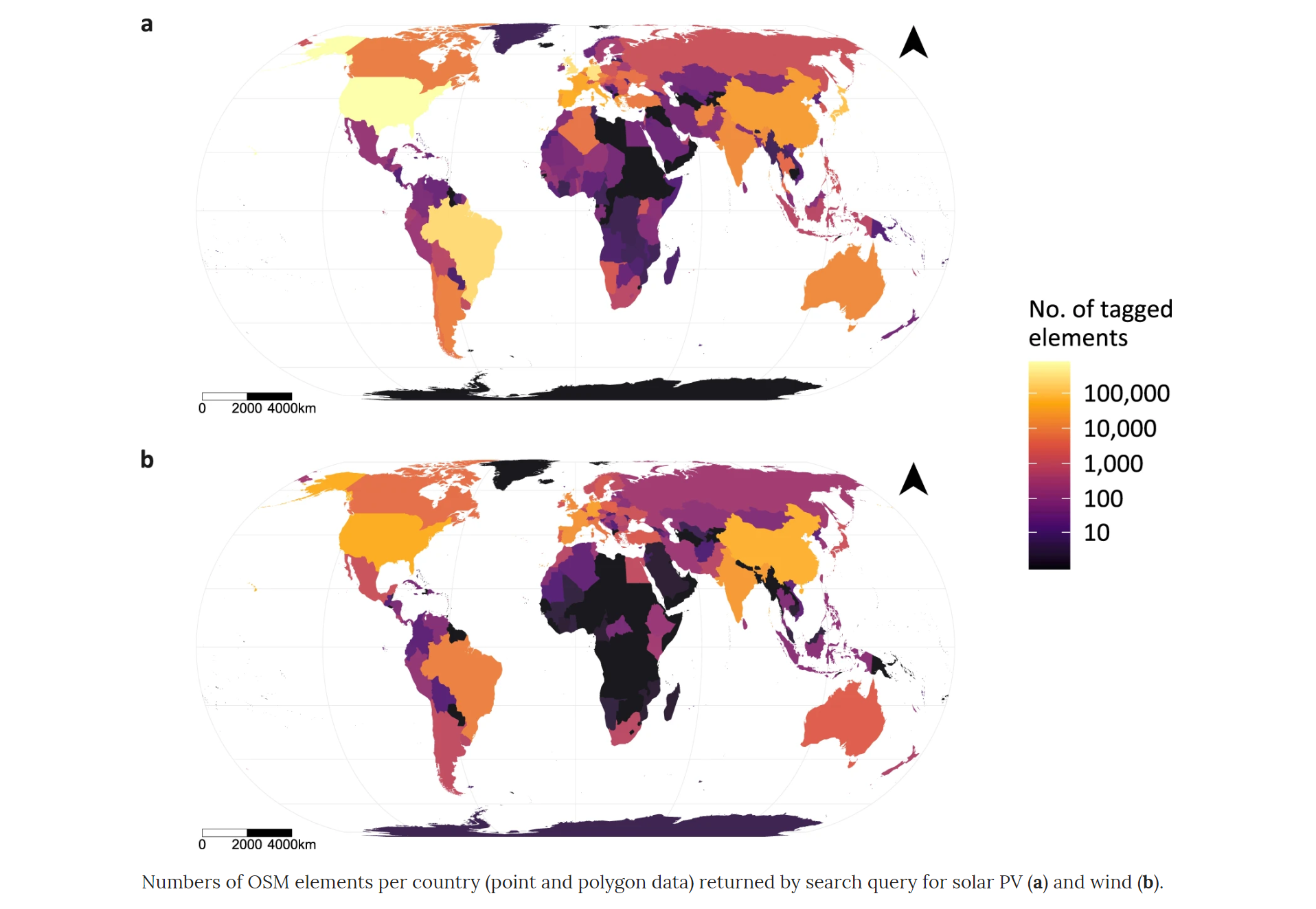 In a study, published in the Nature journal Scientific Data, University of Southampton researchers have showcased where the global green energy revolution is coming from. Using OpenStreetMap infrastructure data, the researchers have determined that Europe, North America, and East Asia are dominating the renewable energy scene. Their results correlate extremely well with official independent statistics of the renewable energy capacity of different countries.

By accurately mapping the development of renewable farms, the researchers not only wanted to create a global, open-access, harmonized spatial dataset of wind and solar installations, but they also hope to provide an insight into the footprint of renewable energy on vulnerable ecosystems and help planners assess such effects.

According to lead researcher Sebastian Dunnett, “While global land planners are promising more of the planet’s limited space to wind and solar energy, governments are struggling to maintain geospatial information on the rapid expansion of renewables. Most existing studies use land suitability and socioeconomic data to estimate the geographical spread of such technologies, but we hope our study will provide more robust publicly available data.”

The research data is available in vector format, either as geopackages, shapefiles, or comma-delimited and describe groupings of wind turbines or solar PV, i.e. energy ‘farms’, as well as lone installations, i.e. a single wind turbine or solar panel. The metadata, describing whether the location is urban or beside/on a water body, as well as an estimate of its power capacity (created using a predictive model) is also included. Access the complete study in Nature here.