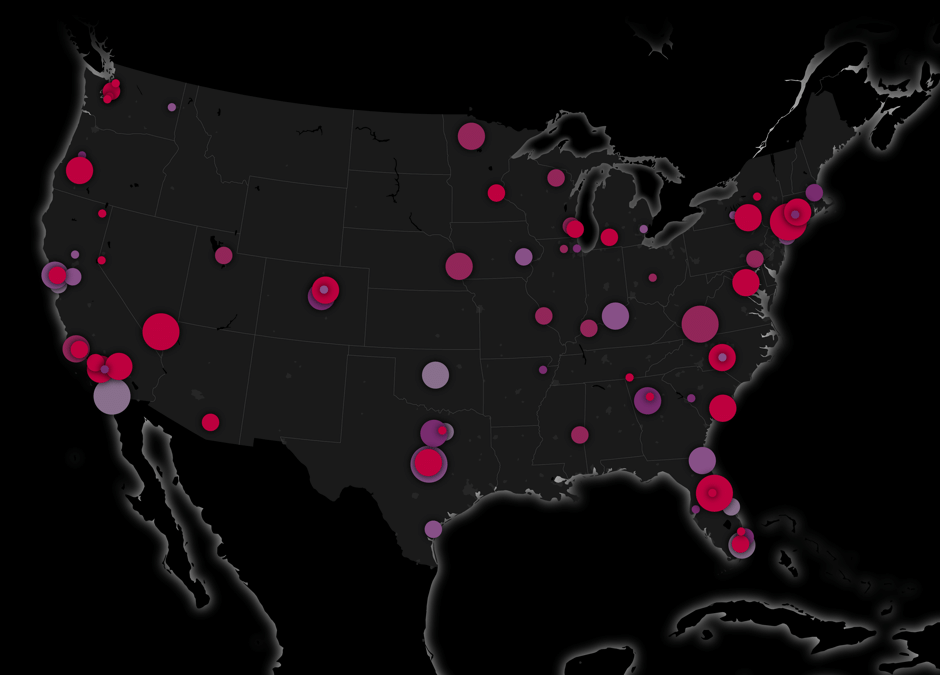 By any count, the Las Vegas Strip massacre on late Sunday night, which killed at least 59 and wounded more than 527, remains uncontested as the deadliest in the history of the United States. And it happened within 16 months of the second-worst mass shooting incident in the country –  when 49 people were killed and more than 58 injured at a nightclub in Orlando, Florida.

Investigative journalism magazine Mother Jones, which doesn’t count gang-related violence as a mass shooting, has been keeping a tab on these deadly incidents since 1982. Soren Walljasper from CityLab’s maps and design team has now mapped this data – dividing it neatly into color-coded blocks of six years that you can see below: 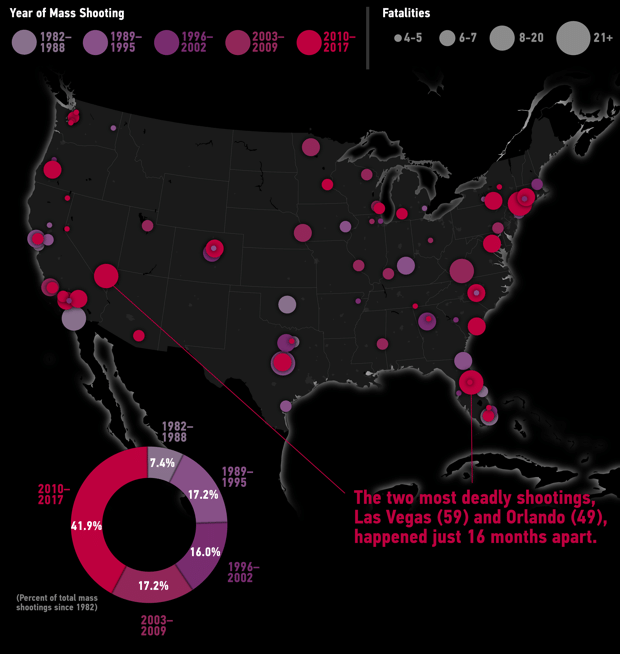 For the sake of clarity, the map above shows mass shooting incidents where four or more people were killed. Even by this count, the data is pretty alarming. 729 people have lost their lives to mass killings since 1982. Out of these, 359 fatalities occurred after 2010 in 34 different incidents.

If we were to count the incidents in which four or more people were shot at (excluding the shooter), and not necessarily killed, as documented by the Gun Violence Archive, Sunday’s incident would be the 273rd mass shooting of 2017.

Acknowledging that “this year there have been more mass shootings than days in the year,” US Senator Chris Murphy said in a statement, “This must stop. It is positively infuriating that my colleagues in Congress are so afraid of the gun industry that they pretend there aren’t public policy responses to this epidemic. There are, and the thoughts and prayers of politicians are cruelly hollow if they are paired with continued legislative indifference.” Whether this incident was enough, or more people have to die before Congress spurs into action for stricter gun laws, remains to be seen.

#GeoDev #Ideas
Alert! Join CASSINI Hackathon focused on space technology for sustainable tourism
Aleks Buczkowski 03.29.2022
AWESOME 2
#Ideas
Give Me a Standard, Any Standard
Bill Dollins 07.15.2022
AWESOME 1
#Ideas
Avoidance Mapping: What It Is & Where It Fits in the Cartography Cube
Rose Njambi 06.13.2022
AWESOME 3

This YouTube series is the ultimate guide for young startups

Starting a new business may be tough. You have a great idea that you want to transform into a startup… But where to begin? What steps should you take? How to register and fund your business? How to manage it? How to advertise?… The list of questions can be endless.

Many startups including our team at Geoawesomeness are struggling to find the answers. Hundred of websites, articles, and videos… Recently I found an incredible resource that is the most comprehensive and the best series any young startup can take. The set of 24 videos called “Tools for Entrepreneurs” has been jointly created by Google and General Assembly (the online course company) back in 2013. But although it’s already a few years old, it’s the most useful resource I have found so far. If only I had found it earlier… It would save me a lot of troubles and sleepless nights;).