If you are a US citizen, you may want to recheck your home’s flood risk. A new national-level study has found that a total of 14.6 million properties across the United States are at risk of severe flooding. Of this, 5.9 million property owners are either not aware of or underestimating the risk they face because federal maps do not identify them as being within the Special Flood Hazard Areas (SFHA).

Non-profit research and technology group First Street Foundation has created a new high-precision, climate-adjusted flood model that assesses the risk of flooding at the individual property level – today and into the future – for all types of events, including fluvial (riverine), pluvial (rainfall), storm surge, and tidal sources. And now, the group has released flood risk data for over 142 million homes and properties across the US. 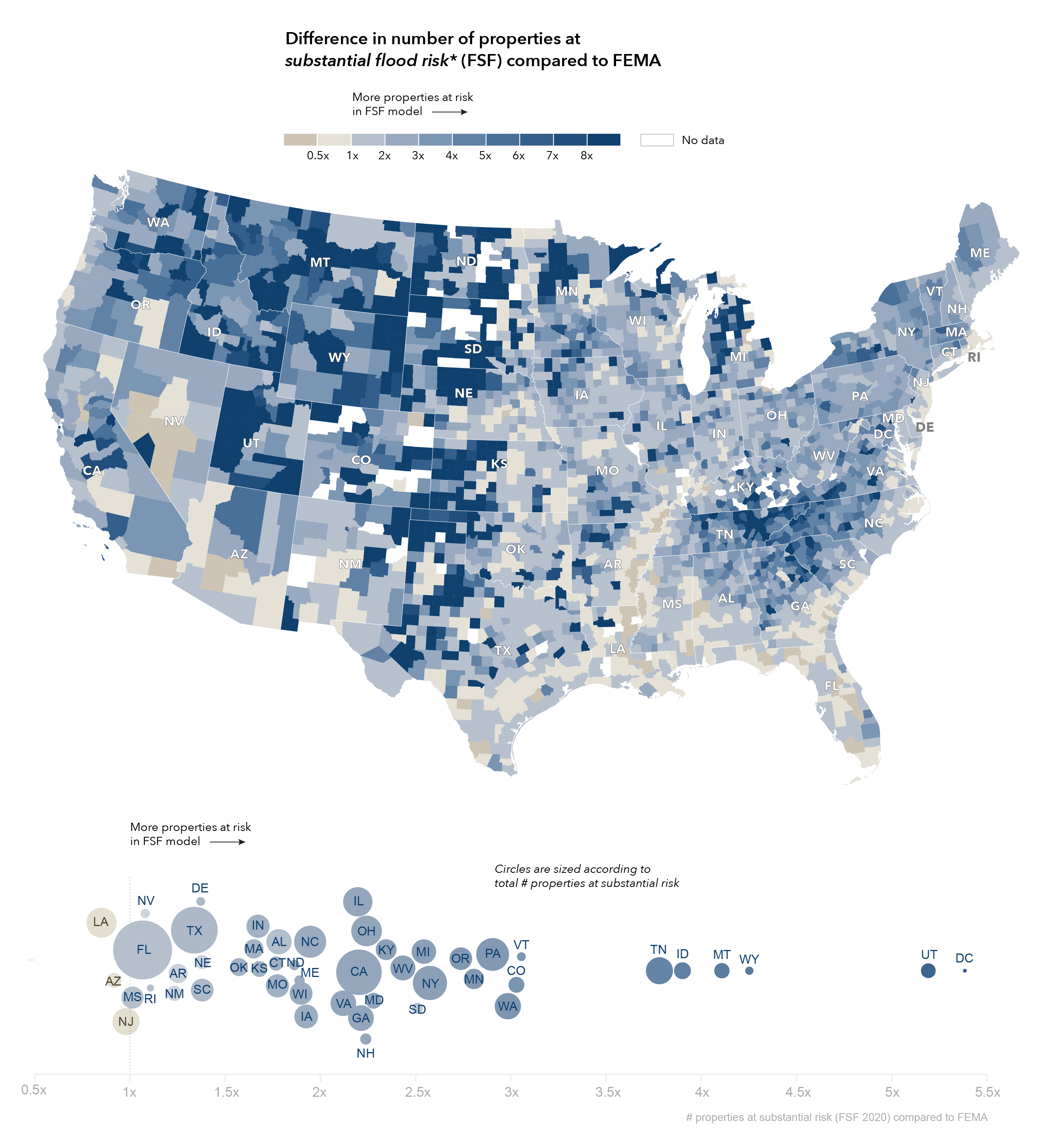 The findings, published in a new national report, say that around 1.7 times more properties are at substantial flood risk compared to the FEMA 1-in-100 SFHA designation.

Also see: Map shows locations where building foundations may crumble in the US

The greatest differences between the First Street Flood Model estimates and FEMA SFHA designation have been observed in the states of Washington D.C. (438%), Utah (419%), Wyoming (325%), Montana (311%), and Idaho (290%). This is chiefly because FEMA’s mapping in some of these locations is not yet complete, while First Street is offering nationwide coverage. 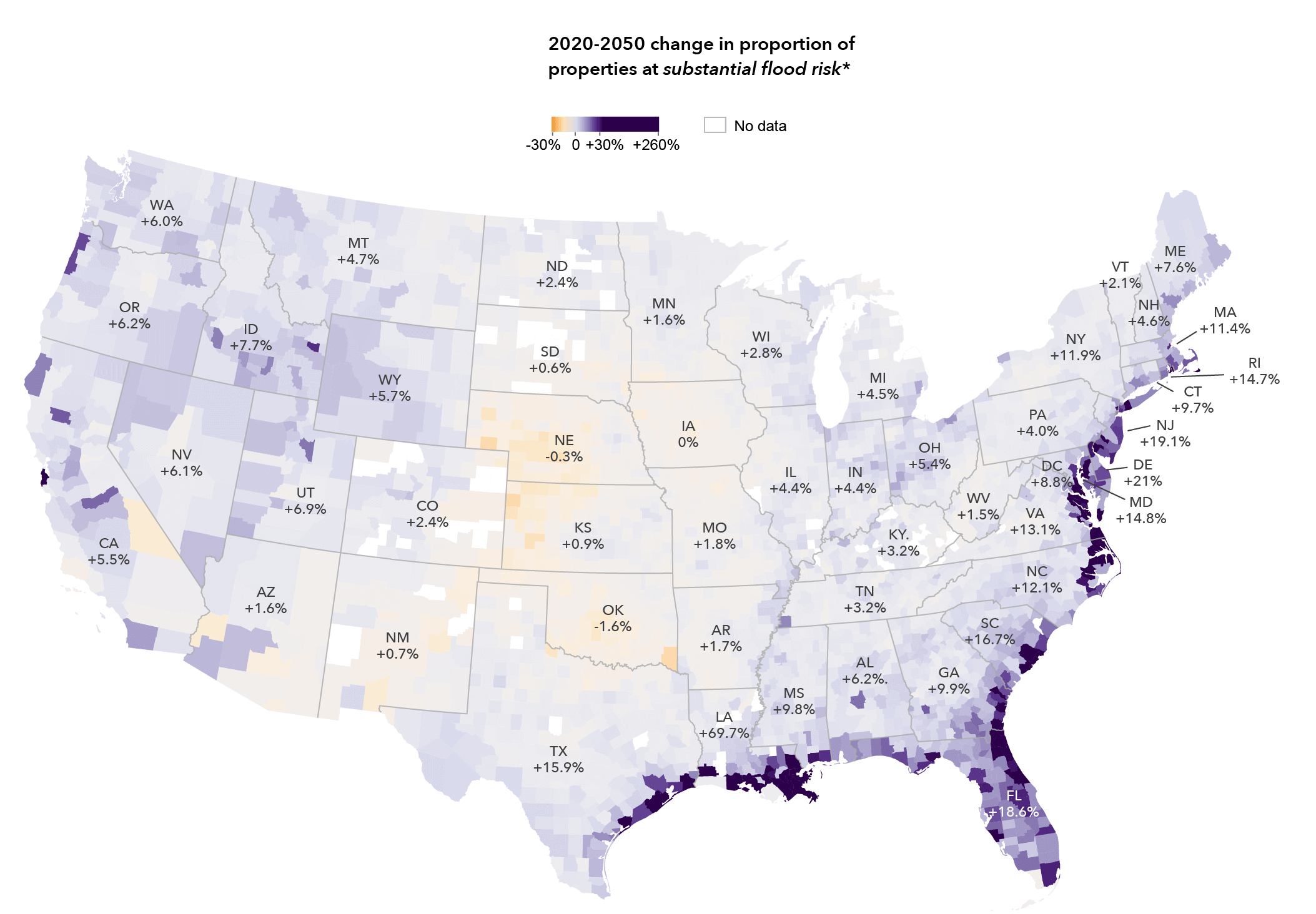 Interestingly, in Arizona, New Jersey, and Louisiana the First Street model shows a lower count of properties currently with substantial flood risk in comparison to the FEMA SFHA. However, when future environmental changes such as sea-level rise that approaches or exceeds protective levee heights are factored in, additional properties fall into the high-risk categorization.

If you also want to check your home’s flood risk according to the new model, you can do so here.

These location-based mobile tools will help you maintain social distancing

With both the movement of people and COVID-19 cases increasing rapidly in several countries around the world, it has become more crucial than ever to follow rules and regulations (and wear a mask). Social distancing continues to remain one of the most effective ways to stop the spread of the coronavirus, but it can also be quite tricky to follow, especially in crowded places. Here are some free mobile applications that can help: 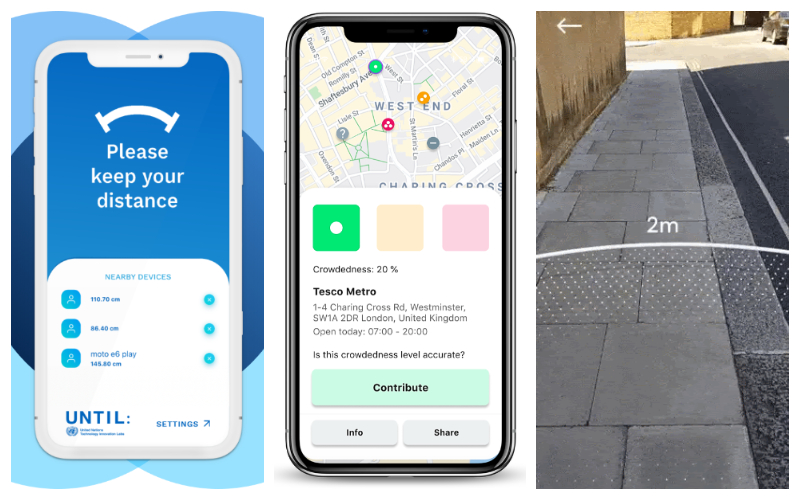 From L to R: 1point5, Crowdless, and Sodar

1point5 measures your distance to other phones and devices as long as the Bluetooth of those phones is turned on. Those other phones do not need to have the app installed for the app to detect their presence. If anyone encroaches your 1.5-meter perimeter (adjustable to 2.5 meters, depending on your preference), the phone will vibrate to alert you.

You can disable alerts from known devices around you and rest assured in the knowledge that the app does not collect any personally identifiable information. The app is available for both Android and iOS devices.

This free app provides live data on the busyness of supermarkets so you can choose to shop when it’s safest for you. Crowdless uses anonymized existing data sources, such as Google Maps and Google Places data, to track the movements of mobile devices. It combines this information with crowd-sourced data by asking the user to confirm whether or not the location is busy.

The app does not store any personal data and your current location is used for the sole purpose of displaying the most relevant search results. You can find the app in both Apple Appstore and Google Play Store.

Sodar is a new augmented reality (AR) tool by Google that would allow you to visualize a 2-meter social distancing guideline in your environment. Sodar is not a standalone app and you do not need to install it. You only need to visit its website using the Google Chrome browser on Android devices. Once launched, Sodar will create a radius ring of just over 6 feet around you to help you understand how far you should be standing from others.