The pedal-powered adventures of a GPS artist 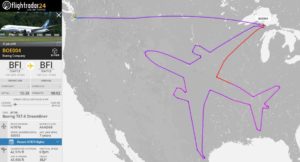 Earlier today, a Boeing Dreamliner drew a Boeing Dreamliner 42,000 feet up in the air. How? It flew nonstop for 18 hours along a route which looks like an airplane when traced on a digital map. And the popular flight tracking site Flightradar showed the feat live. Welcome to the geoawesome world of GPS doodles!

You’ve probably seen them floating around social media already, courtesy inventive runners, bikers and walkers jazzing up their workouts with tracking apps that trace quirky figures on maps. The trend has caught on even more with businesses making GPS art a part of their marketing gimmicks. So while Old Spice ran a GPS doodling contest called Dream Runner last year, a couple of months ago T-Mobile got two US cities – Los Angeles and District of Columbia – to face off in an epic GPS Drawing Challenge.

Then there are those for whom GPS art has become a way of life. Like Canada-based ‘Cycleangelo’ Stephen Lund, a brand strategist and creative director by the day, and a self-confessed GPS-art obsessed cyclist most of the rest of the time.

Stephen bought a Garmin, his first GPS-tracking device, in the fall of 2014. All he wanted to do was to track and analyze his performance as a cyclist. But when he saw the thin red line created by his rides on Strava – the platform he used to render the GPS data on a map – Stephen knew that he had stumbled across a creative goldmine.

So, on January 1, 2015, Stephen snuck out of the house with his bike before the sun came up and traced a New Year’s message on the streets of Victoria, BC. That year alone, he clocked more than 5,000 km (3,100 miles) to complete around 80 doodles. Today, at 52, Stephen rides 300-400 km per week. He has graduated from that simple ‘Happy 2015’ message to drawing sea serpents, alien dudes with alien pets, a happy flappy inflatable tubeman, a turtle of the Teenage Mutant Ninja variety, Darth Vader and much more. Stephen doesn’t have a count for his doodling in the last year or so, but he insists the grand total is definitely more than double his original tally! 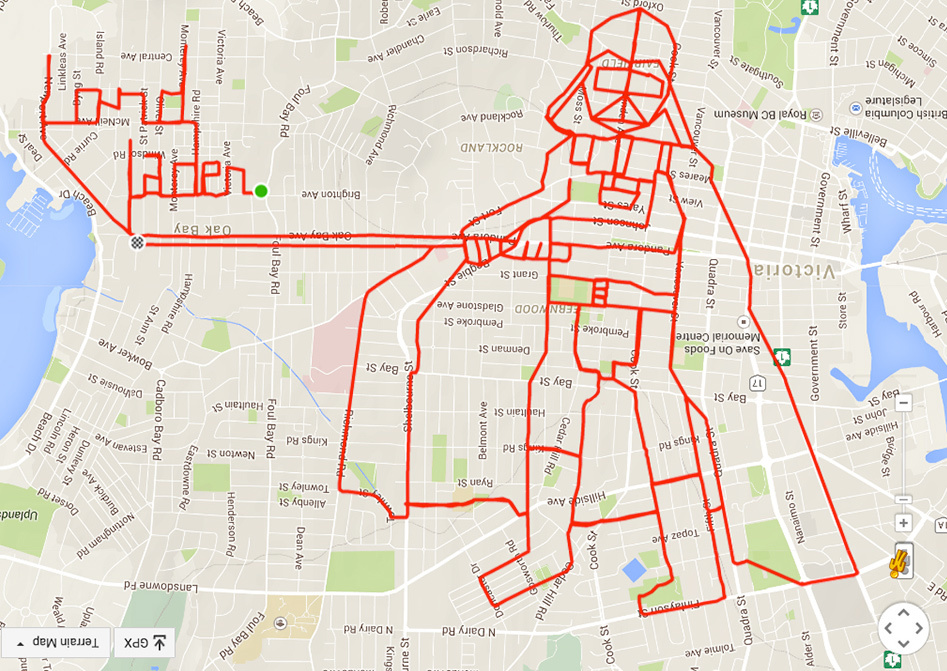 It should be, considering how often he’s implored by fans to make doodles of names and birthday wishes. “I receive lots of requests from people, and while I try my best to fulfill them, sometimes it’s simply not possible,” Stephen tells Geoawesomeness. “Actually my best doodles are the ones that emerge organically from an idea or a shape that pops out of the map. After I see a general shape, it’s simply a matter of zooming in on the map to find the roads and paths to flesh out the details and complete the picture. Coming at it with an image in mind is more difficult as it is time-consuming – and often impossible – to find an area on the map that ‘fits’.”

But then again, Stephen loves challenges. And finding his way from point A to point B is a big part of the fun factor for him. “This often requires fence-climbing, bush-whacking, cutting across rough terrain and other strategies that feel more like cyclo-cross or mountain biking than road cycling,” he laughs, before letting us in on his secret: “If I want to get very detailed in an image and simply don’t have the roads to accommodate it, I may use a trick I call ‘connecting the dots.’ If I pause my Garmin at point A and restart it at point B, the points connect with a straight line.” 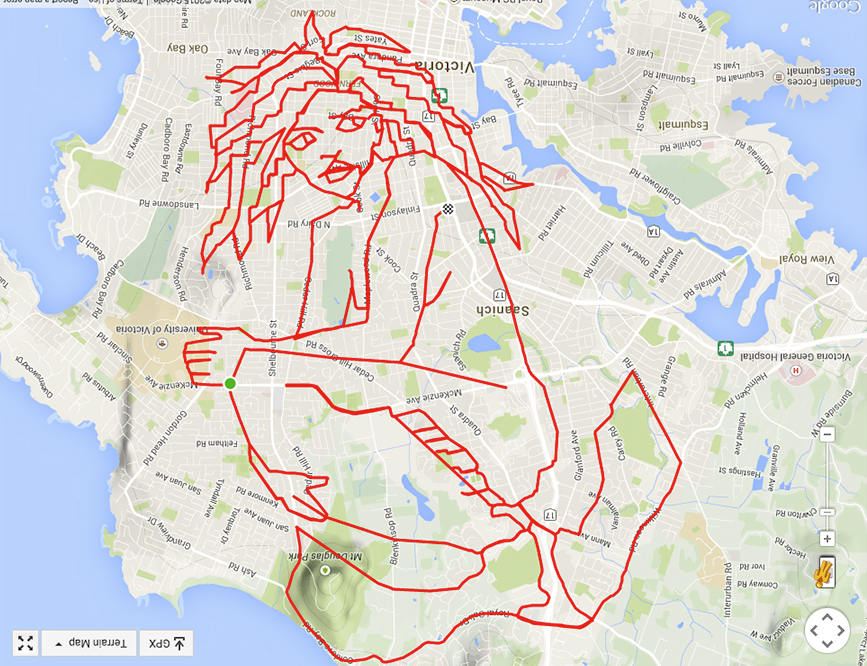 Stephen has recently completed a doodle that covers an area of one billion square feet (!), but his trick remains crucial. A GPS tracking device doesn’t come with an eraser. If Stephen makes a wrong turn or loses his way, he generally has to scrap his work in progress and start over. “I’ve actually been 30+ km into a doodle when I’ve had to abandon the effort and go back the start,” he sighs.

Has his work inspired family and friends to try GPS doodling? “I have a number of friends and acquaintances, as well as my wife, who’ve given it a try. Most have concluded that it’s a lot more difficult than it looks – especially in the planning part of the process,” Stephen shrugs.

So, until the time you find the inspiration to get your own GPS tracking app and give this activity a go, do what we are doing: Feast your eyes on this gorgeous artwork from the Cycleangelo’s sketchbook! 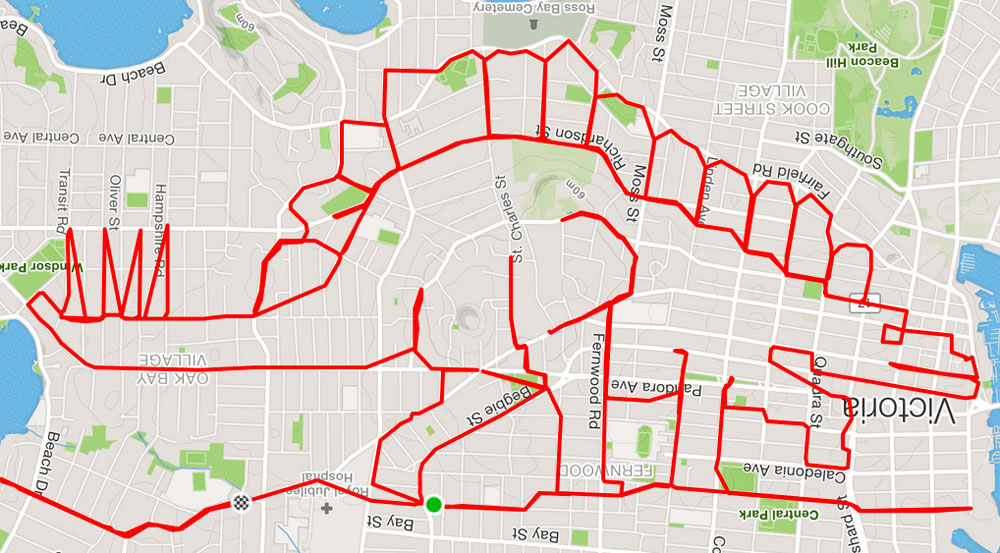 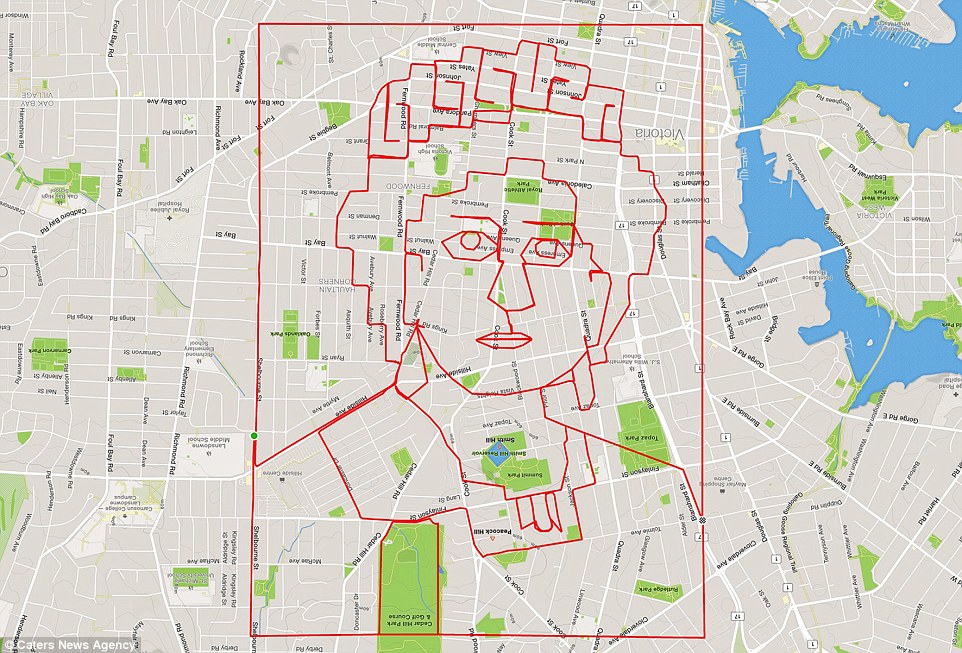 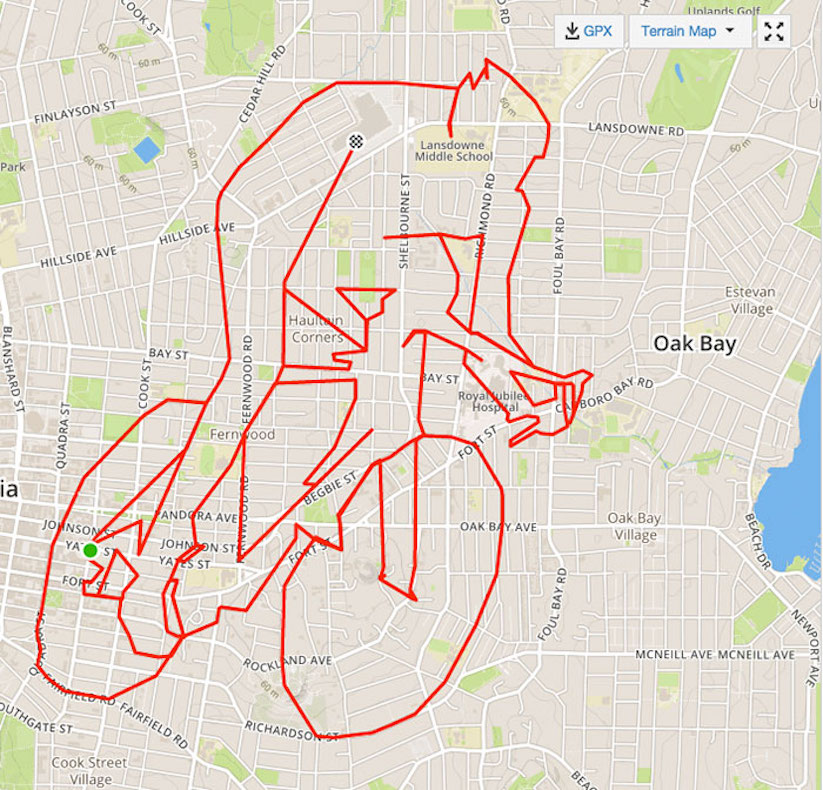 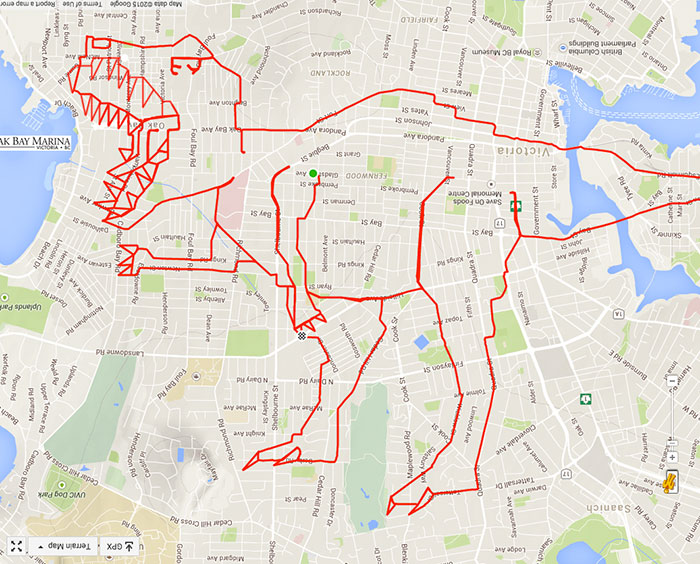 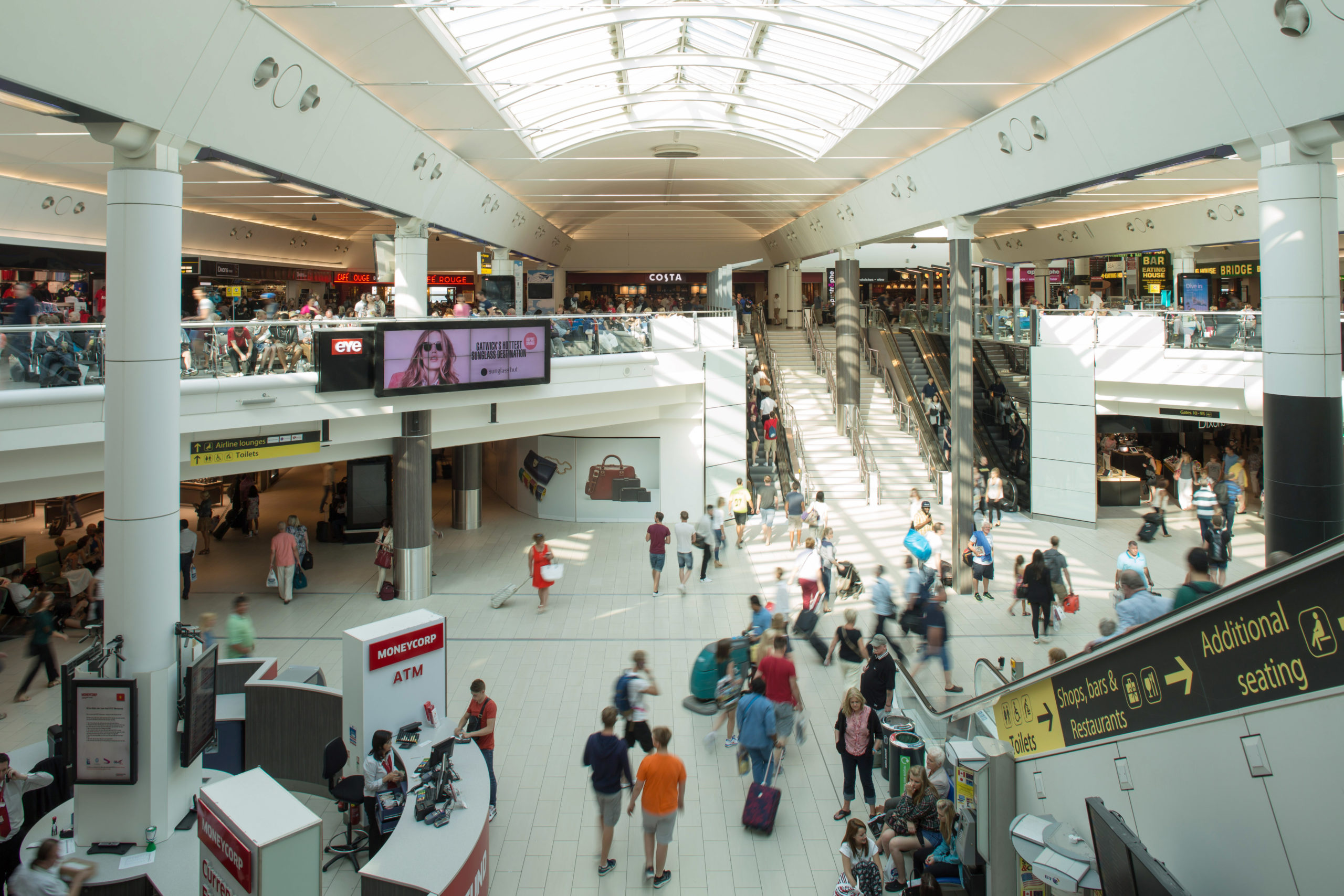 In June 2017, Gatwick Airport, the second largest airport in the United Kingdom, passed the 45 million annual passengers mark. Soon, this number would climb to 50 million. Handling so many people and making sure they don’t miss their flight simply because they couldn’t find their way around the airport has naturally been sitting high on the authorities’ priority list. So, earlier this year, around 2,000 Bluetooth-powered beacons were installed across Gatwick’s two terminals to give passengers an augmented reality wayfinding navigation system – a first for any airport in the world.

To do this, Gatwick fished out the riches from a £2.5 billion investment program earmarked to transform the airport. But how many shopping malls, museums, stadiums, office complexes or other large indoor public spaces can boast to have such deep pockets? Even though we all are well aware of the many benefits of indoor localization and navigation systems, their widespread deployment has been heavily constrained by the high hardware and labor costs that tag existing technologies like beacons, visible light communication systems, RFID, Ultra-Wideband, infrared, ultrasound, or other laser-based instruments.

This is exactly what inspired the Cloud & Mobile Research group at Microsoft Research Asia to think of leveraging smartphones to build an infrastructure-free, map-free, plug-and-play navigation system that doesn’t have to depend on any positioning technology. And thus was born Path Guide, an app that allows users to find the exact path to their destination by following the traces created by someone who has already been there. 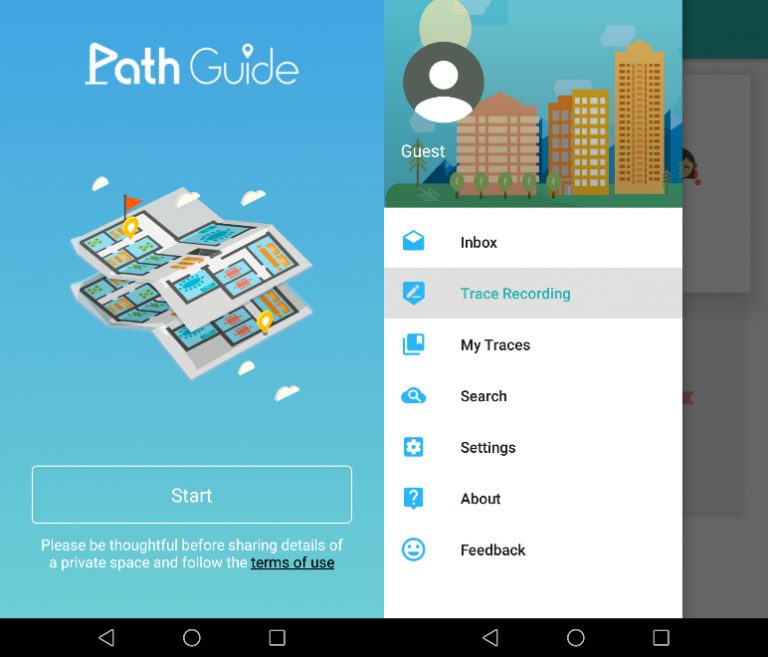 The Android-based app uses data from the sensors that come pre-installed in smartphones, like the accelerometer and the magnetometer. A ‘leader’ visits an indoor location and records his path on the app which pushes the sensory data along with the user’s walking patterns to the Cloud. Any other user can now follow that path to get to the leader’s destination. As more and more people follow the path, additional data gets collected and goes into making the overall user experience better. Additionally, users may add text, audio, and photos as annotations along the path for more clarity.

Think of a shop owner tracing paths from the different entrances of a mall to his relatively hidden store, or a coworker who knows where the client’s cabin is located drawing out the path for other colleagues to follow. Brilliant, isn’t it?

Well, the benefits are many and Microsoft hopes to make the app available on every platform and mobile device soon, but, for now, its usability is far from ideal. For example, if the magnetometer is not properly calibrated, the user experience could be adversely affected. And Associate Researcher Yuanchao Shu, who has led the project, admits this much.

“First-time users need to follow our tutorial to learn the system and get used to it. A user needs to understand the basic concept of following a trace as well as acquire the knowledge of how to create a good reference trace from trials,” Shu tells Geoawesomeness. “But once users get the hang of it, it works quite nicely,” he insists. 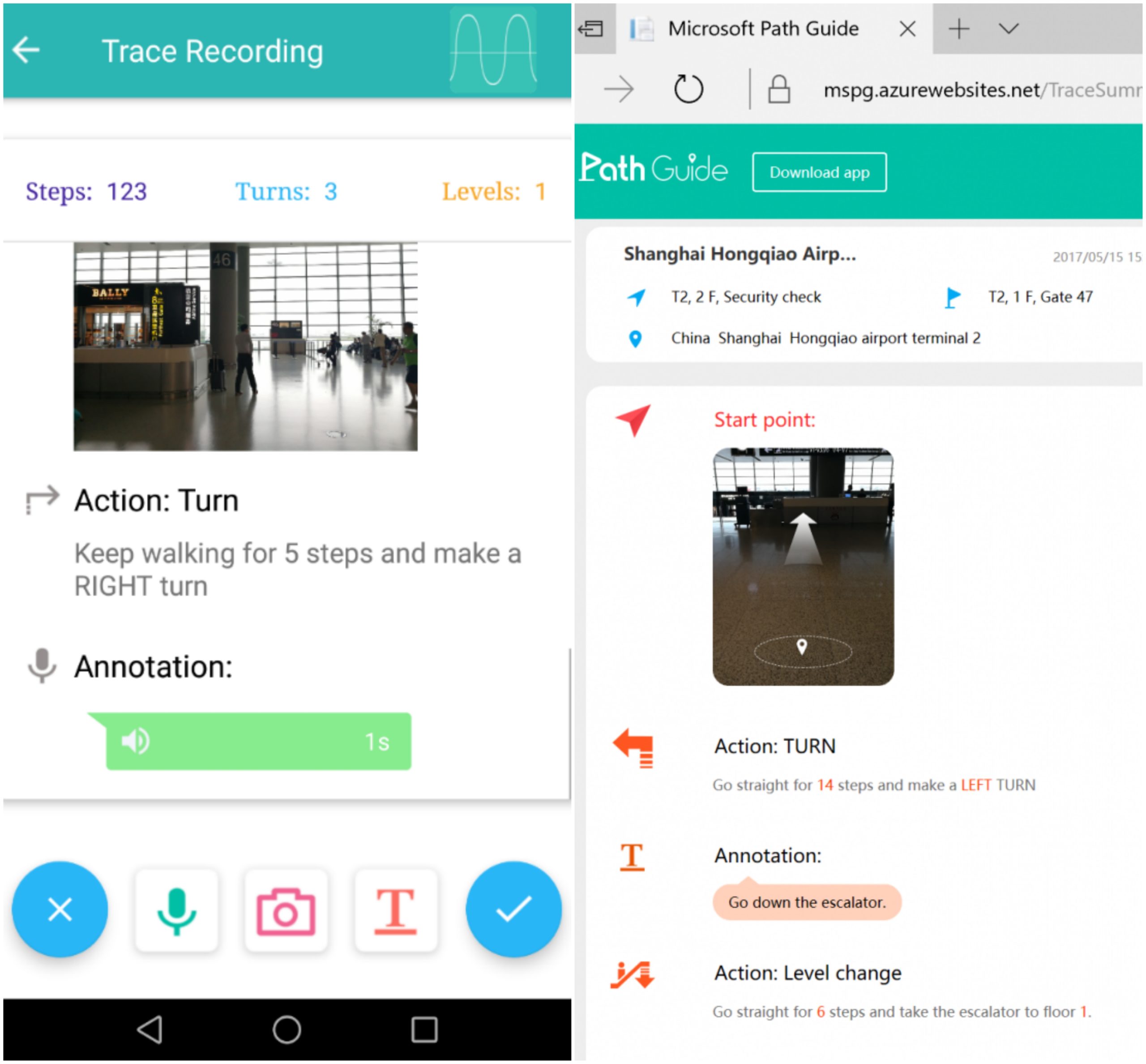 Related: The future of indoor navigation is here

Similarly, it is difficult for Path Guide to navigate in wide open spaces, like a hallway in shopping malls, where there are no clear turns and users tend to diverge along the way. “There are also several corner cases in complicated indoor environments where Path Guide cannot work perfectly,” Shu adds, giving the examples of spiral and garden level staircases.

That said, the team has been working on these technical challenges and is committed to making the app easy to use. New features are also being added to the app based on the feedback received from the users. Like in the latest update at the time of publishing this blog (v 1.1.0), the team had added a functionality called Hidden Trace where a trace could be shared only if the followers know its unique trace ID.

A reporting system has also been built-in to discourage pranksters from misguiding followers. Going forward, Shu hopes that tech fans, developers, and researchers who have an interest in indoor navigation technology will keep providing constructive feedback to his team and help them smooth out all the rough edges. Godspeed!

Now read: You can build your own Indoor App with this Indoor Positioning Engine SDK