How Can Geography Literacy Be So Bad At The Age Of Google Earth?

The PhD and Vice President of National Geographic Education makes a simple yet disturbing statement: “We have not invested in helping children understanding the world the way they will need to understand it in their adult’s life”. As revealed in this 2006 National Geographic study about young American geographical knowledge, “majorities of young adults fail at a range of questions testing their basic geographic literacy”:

Even if geographical knowledge goes far beyond the ability to place things on a world map (remember, it’s about understanding interaction, connection & implication), those numbers establish a very worrying baseline.

Basically, we are illiterate when it comes to know the world we are living in. So we make decisions to manage it (resources, land, transportation, energy, cultural relations, etc.) based on a very partial knowledge that does not recognize Interaction, connection and implication as key principles of it, from political level to individual one.

THEN, WHY IS GEOGRAPHY LITERACY SO BAD AT THE MOST CONNECTED ERA OF ALL TIMES WHEN EVERYONE HAS GOOGLE MAP ON THEIR PHONE ?

We actually know why. Imperialists nations have always cared a lot about geography, for conquest and colonization purposes. European people for instance started very early to map the world, explore it, describe and define it as accurately as possible to assess the values of lands in terms of military resources needed VS commercial potential. A lot of the geographical knowledge was built in that context (anthropology, botanic, species inventories, climatic event description, etc.).

When the last decolonization started in the early 1950, the western world entered a phase of recoil. Colonizing nations faced powerful forces pushing them out. Their empires fall apart, forcing European nations to withdraw on their home countries, and to abandon their overseas land possessions. The competition among nations became a technological one to replace the territory-size contest: most countries of the western world shifted all their efforts to industry, technology and technical innovation to keep their leading advantage over ex-colonies.

As a result, mathematics, physics and computer science became the most valued options in the academic & corporate worlds. Geography went into an existential crisis at that time, especially in the 1960′s: if we know everything about every places of the world now, what use can we make of such a field? Where can it stand in a world obsessed by productivity and technical progress?

Geography had to redefine itself. And it is not something that happened in six months. It took a couple of decades for geography to be re-born as a much wider discipline, now studying all forms of multiple and complex interactions people & societies have with their spaces, places and territories.

During that “redefinition period”, we were still teaching an old dusty geography, about where capital cities and biggest rivers are, where coal resources can be found on the planet, that kind of things. Nothing, in that catalogue of factual information, is neither scientific (there is no mechanism, no causal links established between phenomenon), nor useful as a set of skills.

NO ONE FEELS SMARTER AFTER LEARNING BY HEART A LIST OF ALL THE CAPITAL CITIES OF THE WORLD. AND THAT’S WHY THE WAY WE DEFINE AND TEACH GEOGRAPHY TODAY, IN THE 2010′S, HAS TO CATCH UP WITH ACTUAL COMPLEXITY & INTERACTIVITY OF THE WORLD TO BECOME USEFUL AND RECOGNIZED AGAIN.

HOW TO FIX IT?

Well, I am not pretending to answer such a complex question by myself today, but here are a few simple statements we can start from, and some in the geographer community already did:

Stop reducing geography to maps: maps are a tool to illustrate and communicate information. It’s a subjective representation of the world. A monkey drawing a map is not necessarily a geographer. It takes a deep understanding of the mechanisms behind the map to actually be able to produce a relevant one.
Stop pretending that math can explain everything: human behaviours do not get explained by so-called rational over-simplified formula. The least effort principle does not explain how human work and make decisions every day. Reality is much more complex (too complex for us to modelize it with algorithms for the moment) and permanently changing. By the time you would finish your calculation, your conclusions would be obsolete already, because people act & react constantly in an infinity of ways.
Admit complexity & find a way to process it: While we will see the world as the over-simplified flat rectangular world map we all have in mind when thinking about “the world”, nothing will move. To embed interactivity, connectivity and implication in our knowledge, we need to process complexity, which means massive amounts of data, both qualitative & quantitative. Counting things one by one won’t work. It’s about opening new dimensions in terms of tools and theories.
Integrate everyone’s world in “the world”: The very image of what “the world” is should be more of a 3D interactive movie than a flat boring map hanging on the classroom wall. The bus ride you took in the morning to go to school, the landscape you’ve seen from the window, the place described in the novel you were reading, the place you dream about when you’re bored, the imaginary map of your video game, THEY ARE ALL FORMS OF GEOGRAPHY LITERACY.

YOU KNOW MORE ABOUT THE WORLD THAN YOU THINK. NOW IT’S JUST A MATTER OF BEING PROVIDED WITH THE RIGHT EDUCATIONAL RESOURCES TO HELP DEVELOP & COMPLETE THAT KNOWLEDGE: TO BUILD CONNECTIONS WITH OTHER’S WORLD, INTEGRATE INTERACTIVITY & UNDERSTAND THE PATTERNS BEHIND IT – THEN WE WILL BE ABLE TO MAKE INFORMED DECISIONS.

Google launched Street View as an experimental project back in 2007.  They packed several computers into the back of an SUV, stuck cameras, lasers, and a GPS device on top, and drove around collecting first images in few US cities. Around 2006 I was working with Tele Atlas (acquired by TomTom in 2007 for $2 bln) where we were collecting road data with Mobile Mapping Technology. Similar idea, yet different way of thinking… At that time we didn’t have a clue that it’s even possible to provide users all around the world with such a huge ammount of data online, so it was only used only internally (what a loss). 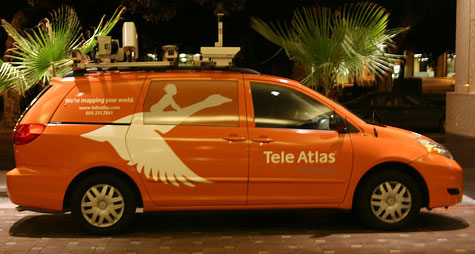 But Google as it’s a Google developed the project and managed to covere half of the world with 360-degree view of surrounds of roads and streets. Last year guys at Mountain View decided to go even further and created a Street View Trakker backpack, which gives possiblity to film all amazing places not accessible with a car. What’s cool Google lets users borrow the device if you manage to convince them that your project is truely unique.  Last week  the Verge: published this cool video releaving the story behind Google Trekker and the Street View. Worth watching: