Algorithm targets Predicting not just ”When” but also ”Where” the Crime is gonna take place.

For me, this is awesome. GSM technologies, Location-based and Social Network technologies are really changing the game pretty nicely. Now Scientists are leveraging these technologies to predict not just ”when” a crime is likely going to be committed but also ”where” . And predicting this to the nearest meter accuracy.

You would want to take a little time and skim through this article courtesy of Parmy Olson to catch the jerk.

Algorithms are everywhere, lending us money, writing the news and potentiallydiagnosing illnesses. For a few years researchers have also been exploring their use in fighting crime too, typically by sifting through a wealth of statistical data about criminal events in a certain location over previous years, then using that data to extrapolate when crime might happen in that same area. Methods like this are being shopped by tech companies like PredPol and tested by police in LA,Santa Cruz and elsewhere.

Researcher Mirco Musolesi is coming at this emerging trend from another angle. Rather than predict when a criminal event will happen on a particularly susceptible street, he is working on predicting where it would happen. This method is a little more controversial because it wouldn’t rely on old crime data, but by tracking potential criminals and their movements via their mobile phones.

This idea was borne out of Musolesi’s research into what he calls mobility patterns, which he recently published as part of his research at the University of Birmingham in the U.K. Recently he won Nokia‘sMobile Data challenge by predicting the movements of 25 volunteers working in a town in Switzerland. He used GPS data, telephone numbers and their texting and calling history to do it, and the algorithm was at times able to predict where these volunteers were heading to within 20 square meters.

Crucially, the algorithm was only this precise when it also tracked the movements and data of each volunteer’s friends. When the algorithm was simply tracking the volunteer, it could predict their future GPS coordinates to within roughly 1,000 square meters. When the prediction took into account additional information from a single friend, the error rate improved by several orders of magnitude.

Though a lot of criminals lack common sense and act spontaneously, most will probably be smart enough to tighten the privacy settings on their smart phones, turning off any location tracking apps and disabling their GPS. But Musolesi says that shouldn’t stop his algorithm from tracking potential lawbreakers because the metrics can also be applied using cell tower information, something that even criminals can’t hide from.

The geographic location from cell towers might not be as precise as GPS data, but assuming network operators could provide the information (unlikely without a court order) authorities could track someone’s movements by triangulating the data from the nearest base station. “If you have a very fine-grain network, you can identify the street and block and house,” Musolesi says. The key is then to look for patterns of movement, and intervene when the algorithm suggests future movement to an unusual area.

Musolesi points out that authorities can already get a suspect’s position if they really need it, and it’s now just a matter of mining the data they have on that person to predict where they might go in the future. It’s not exactly the cosmic, bath-swimming, wooden-ball etching scenario proposed by the movie “Minority Report,” but does suggest a way that police could better prepare themselves.

“Our algorithm is a way of extracting new information from the data [that police can already obtain],” he says. Musolesi is hoping to work with law enforcement agencies to test how well the algorithm predicts future locations of crime, and he suggests using anonymous data from people on bail in the United Kingdom, who have been electronically tagged.

Facebook already uses algorithms to identify shifty users, which for instance look out for older males who frequently chat with young girls and use words like “sex” and “date.” Recently police in the United States arrested a man after he began chatting with a 13-year-old girl and arranged to meet her. Once Facebook tipped off the cops, they moved in.

How would the automated predicting of potential criminals and locations play out in the offline world?  Evgeny Morozov, the author of The Net Delusion, recently questioned whether we’d see more racial profiling and stereotyping, problematically sidelining the need for probable cause. And since most crime-predicting algorithms being used today rely on data about reported crime, police who follow them might miss disturbances that often don’t get reported; think domestic violence, rape and some burglaries.

“Even in the absence of such reports, the police still develop ways of knowing when something odd is happening in their neighborhoods,” Morozov notes. “Predictive policing, on the other hand, might replace such tacit knowledge with a naive belief in the comprehensive power of statistics.”

Musolesi admits there are also major privacy concerns with what he’s proposing, but suggests experimentation anyway. And he expects that to start with, his research will be more attractive to advertisers than police — just imagine your local Starbucks using the technology to predict when you’re about to go on your coffee break, and sending you a special offer just as you are heading out the door.

The researcher is planning to test the algorithm with larger data sets that he will soon be getting from Nokia, checking it on other types of volunteers to ensure that it works.

He then wants to work towards building a platform, or API, so that other developers can build apps that exploit what could ultimately be a web-based service. “You send a list of the last locations and we will return the predictive location in three hours,” he suggests, adding that he is aiming to release the API next year.

Privacy concerns aside, it’s worth considering that with plenty of criminals managing to stay one step ahead of the law, they might end up using a service like Musolesi’s too. 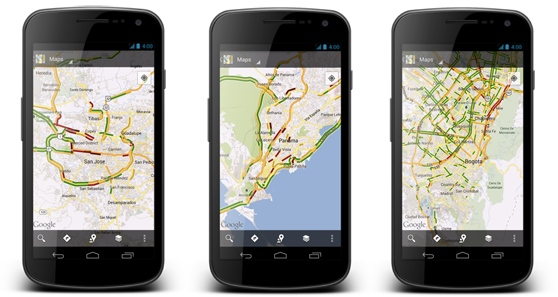 Google has unleashed another update for Google Maps. They are trying hardly to attract users before release of iOS6 with new Apple Mapping service. Google has been constantly adding traffic to new cities but never on such a grand scale. Why now? They really need to have good PR to fight with Cupertino’s marketing.

Anyway the results are cool. Most of the updates focus around smaller cities in the US but finally Google is  Latin America with first-time support for Bogota, San Jose (in Costa Rica) and Panama City but has improved and expanded coverage as well in Brazil, Canada, China, Czech Republic, France, Germany, Italy, Mexico, Russia, Spain, Sweden, and the United Kingdom.

This news is important for me personally as I work in a company that provides traffic info to Google among others.
source: Google Lat Long Blog, AndroidCommunity