iBeacon from Apple Inc: Will it change the Indoor Positioning market? 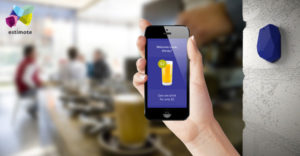 A few weeks back, Aleks did an interview with the CEO of Estimote, where we got a glimpse of what we can expect from iBeacon technology (here’s the link to the interview). iBeacon is a feature that Apple Inc introduced in WWDC June this year and was officially announced as one of the features in iOS 7.  Anyone who follows Apple will pretty much know, how the social media took to iOS 7. There were articles about a lot of misses but what we did not hear so much was about iBeacon! Now with reports coming in about Apple’s implementation of iBeacon in its stores, there has been an explosion of articles and news items claiming how Apple’s iBeacon is going to change the Indoor Positioning landscape and retail shopping.

So what is iBeacon and How does it work?

iBeacon is basically Apple’s brand of indoor positioning technology that utilizes Bluetooth Low Energy (BLE) to detect your presence inside a building using small wireless sensors called Beacons. The Beacons transmit data to your iPhone (Andriod is also going to roll out support I read) using BLE or Bluetooth 4. Beacons is not an Apple technology but the buzz is due to that fact that Apple has decided to throw its weight behind BLE in comparison to Google’s fondness for NFC or Near Field Communication.

iBeacon is so highly rated not only because it can transform the indoor positioning landscape but also because it has the potential to change the retail experience, mobile payments and so much more. 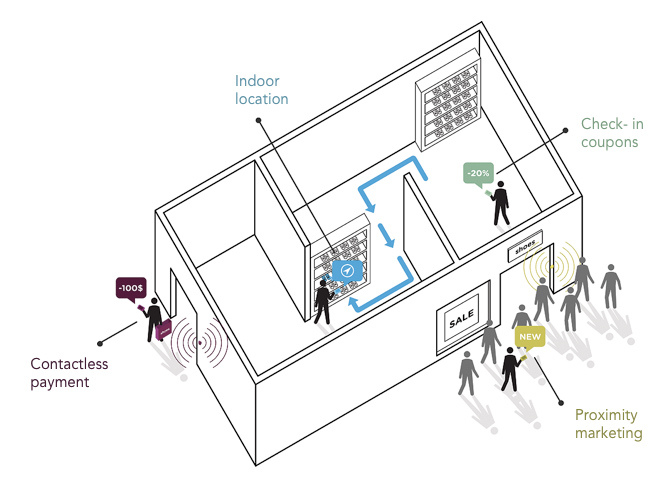 Already a lot of companies are rolling out support for iBeacon and are starting to make use of the technology to enhance their retail shopping experience. Macy’s became the first store to announce iBeacon shopping experience. So the next time you walk into a Macy’s with your iOS device, you will receive information regarding the latest sales offers and more. This technology over a period of time could end up being the deciding factor in your shopping choices.

Hasn’t this technology been around for a while? or atleast the concept, then why the hype?

Well, to be honest, I had the same question in my mind before I ended up spending a couple of hours reading about it before coming to the conclusion: iBeacon is definitely an interesting development. It is not only  a marketing or indoor positioning system, it’s being developed with the idea of being the next level of shopping experience. Let me quote an example that I read online at 9to5Mac.com

Let’s get a little more sophisticated. You may be standing in a clothes store looking at suits. The system notes that you’ve been stood in front of one particular display for a couple of minutes, so it might offer to show you what the suit would look like on you. It directs you to what appears to be a mirror, which photographs you and then overlays an image of the suit on your photo. It offers to show you other colors and styles. – 9to5mac.com

To add this to expanding list of possibilities, paypal announced its own PaypalBeacon which means that paypal is also onboard to enable mobile payments without you even lifting a finger. No more queuing up to make payments! This means NFC for mobile payments could slowly be phased out; but if we have learnt anything from the Tech Industry, it is “nothing is forever”.

Forget about QR codes, NFC technology, kiosks, and tablets as the major game changers in retail; introducing iBeacon and Bluetooth Low Energy technology to our everyday retail experiences is like introducing the Flintstones to the Jetsons shopping mall. – PCMAG

If you are eager to read more about iBeacons, Paypal Beacons, BLE and more; here’s a good list of articles 🙂

There is going to be a boom in the number of location-based applications that have for retail. More and more retailers will want to install BLE based Beacons to be able to leverage this new technology. Whether the iBeacon experience is going to be the Jetsons shopping experience or just another privacy problem is something that we will have to wait and watch.

Hobbit by J.R.R. Tolkien is one of  the first books that I’ve read and I love it. Although Tolkien himself included painstakingly detailed hand-drawn maps in the print editions of his works I was happy to hear that Google and Warner Bros Pictures have collaborated on a project called “Chrome Experiment” which aims to create a virtual Google Map of the Middle-Earth – J.R.R. Tolkien‘s fantasy world and at the same time to show possibilities of tools and apps that can run in the latest Chrome browser and Android.

Once you enter the app you’ll see a Google Map with cloud magically flying above the surface of the Middle Earth accompanied by Elvish music. You’ll be than able to click on one of the buttons on the map to move to selected place. There are 3 places available right now: Rivendell, Trollshaws and Dol Guldur and three more scheduled to arrive before the film’s premiere. Once you choose a place you’ll hear a narrated story about it. Than you can move forward and play an interactive game linked with the location (I find these games rather week). 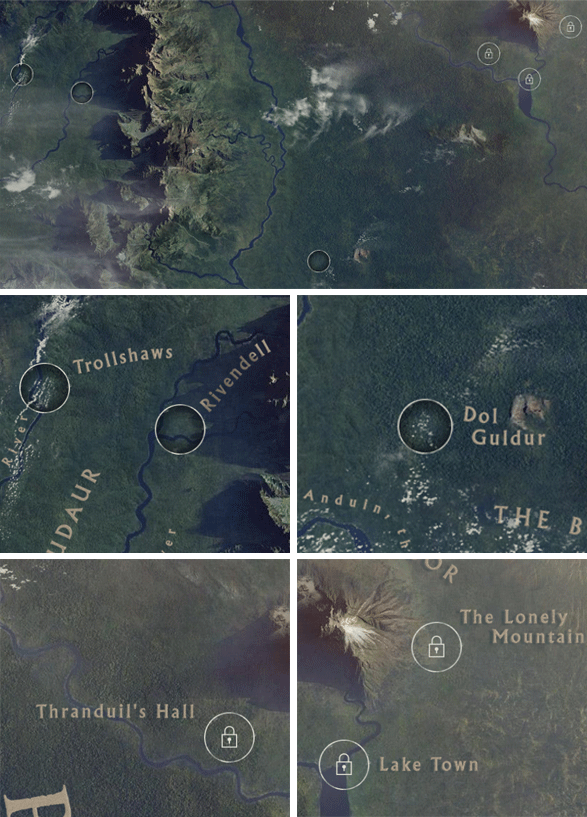 It is really cool that they did such a project. But I must say that my user experience with it in not even close to the one when studying paper maps drawn by Tolkien himself… and I’m a little bit disappointed by that. I would expect something more. More features, closer zoom, maybe a story telling at the map level without the need of moving to a selected location… This project was supposed to take you the Middle Earth while showing the possibilities of new Chrome, but in my opinion unfortunately it managed to accomplish only one of the goals. On the other hand why would I expect any digital map of the Middle Earth would be better that the original one… 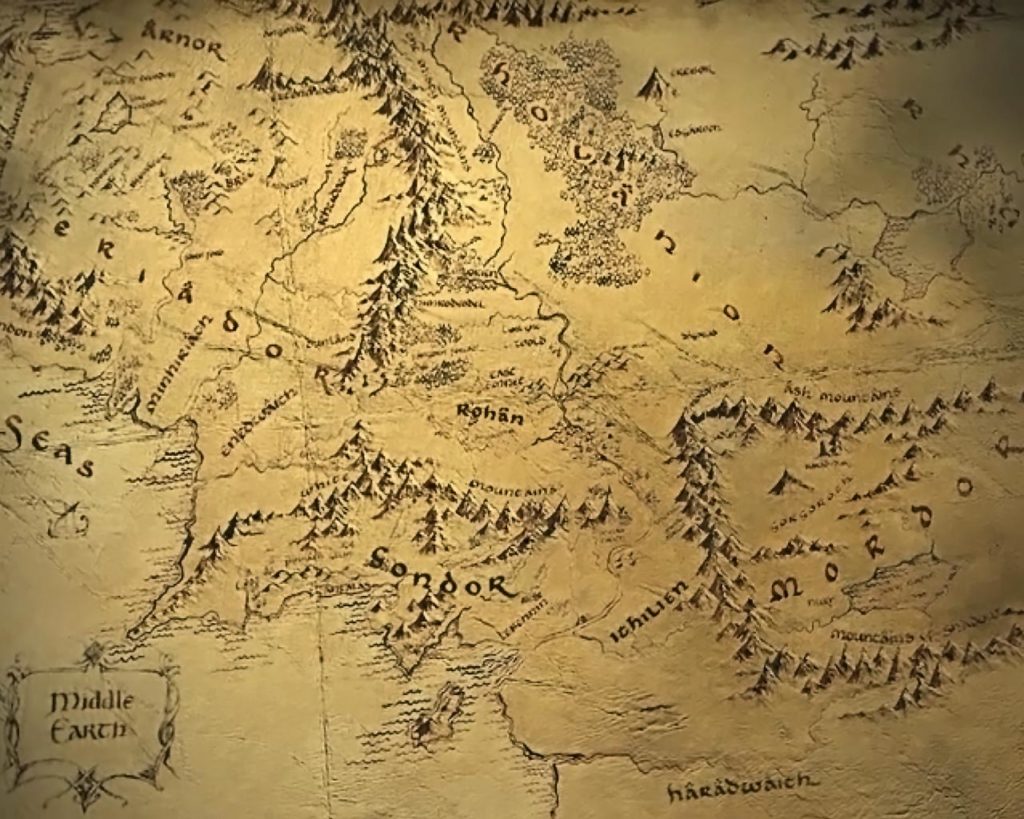