The Hidden Meanings of Maps – Why Scale Matters

Projection is one first step. Then comes the scale choice of what will be the limits of what matters  in the trend or phenomena you want to show. More than a zoom level, picking up the right scale is a tricky and meaningful process similar to building a photograph composition.

The scale choice reveals the very interpretation the cartographer is making of the represented phenomena. People and places that do not appear on the map are considered not relevant to the topic. Then, the edges of the map define a time and space frame containing both the issue and its solution/explanation.

On this map from Le Monde Diplomatique, the political situation in Belgium is the topic. The map was illustrating an article about the 1993 agreement of Saint Michel that made Belgium a federal state by unifying the two main regions as well as smaller german regions under the same government. This is a very specific debate concerning Belgium and Belgium only, not depending on external forces. The issue (political unity of Belgium) contains its solution (it’s a national debate that no one else can solve but Belgians). 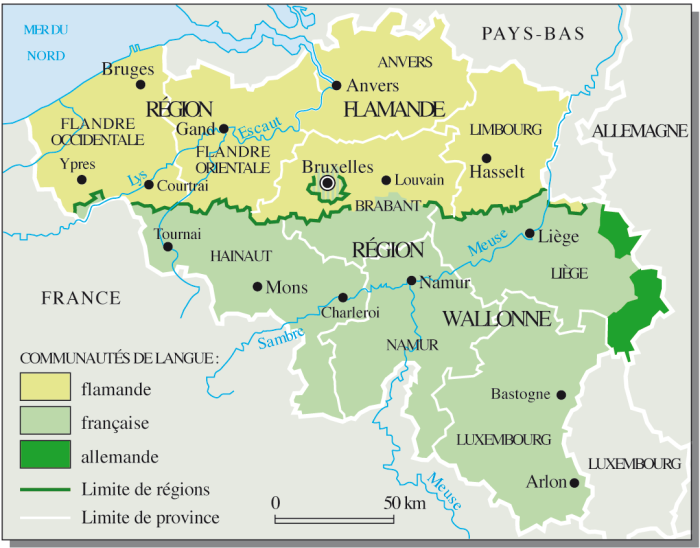 On the example below, a map illustrating the Falklands War of 1982 (from the  Wikipedia article about the event) between United Kingdom and Argentina over Falklands Islands sovereignty, the playground is the Atlantic Ocean, North to South. 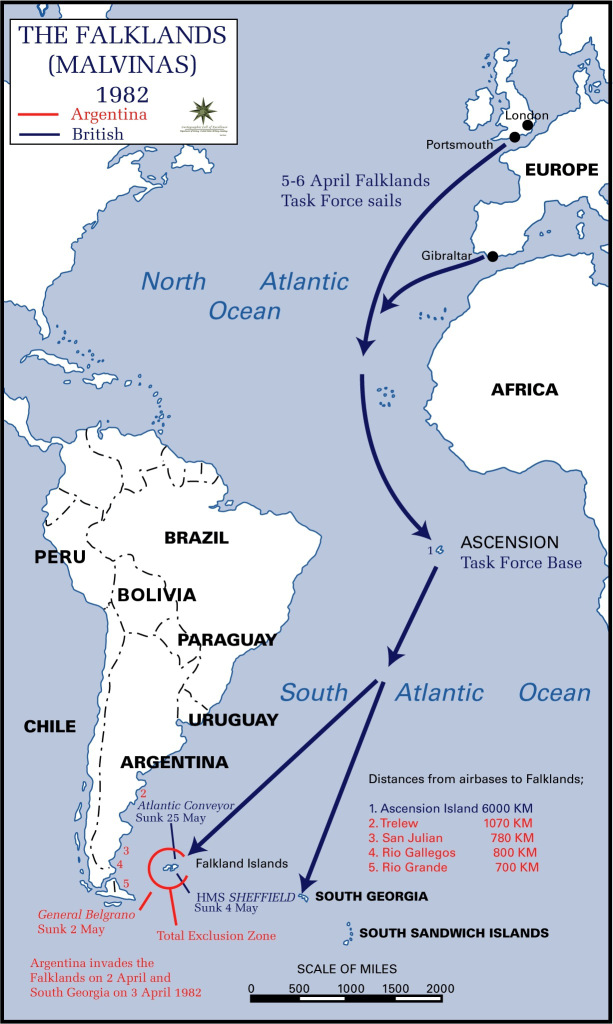 The map focuses on the two protagonists to show how & when they moved strategically to an actual open conflict over the Falklands. There is clearly no other country involved in this, nor other political influences. The map is focusing on strategy, events timeline and show very well the obvious handicap of distance United Kingdom had. That tells us a lot about how UK’s empire last bite was escaping from its yoke and how they desperately fought for it, more as a symbol than as an essential land possession.

Taking a look at this map of  the Muslim Distribution in the world from the map collection of the University of Texas. The map covers a very wide area from east to west, but a relatively smaller one from north to south. Are origins and history of Islam more about longitudinal migrations than latitudinal ones? Well, it is. The religion spread from middle east to Asia and North Africa, but were pushed away north and south by other forces (Christianity to the north & west, as well as from european colonies in central & southern Africa). 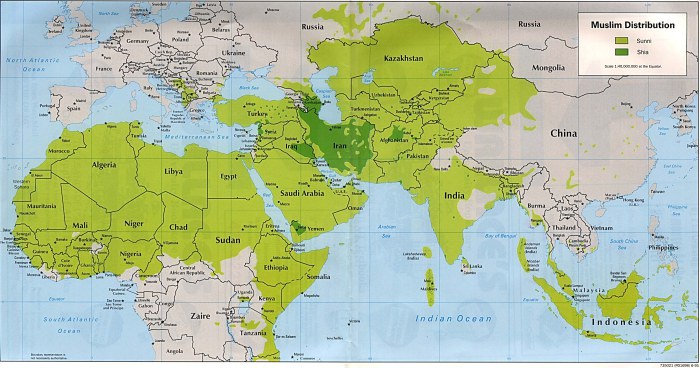 The very framing of the map is already telling us that nothing really matters outside of that area regarding the topic illustrated here. And indeed, when you look at other maps world scaled, like the one below (from Wikimedia), you see that the american continent as well as the southern part of Africa and northern part of Eurasia have a lot less muslim population than the region shown on the first map.

However, the second map gives you that information, instead of taking for granted that you already know that Muslims are more likely to be spatially concentrated in the Middle East than on the american continent. On the first one, the cartographer made the choice of assuming that information was obvious, as the second did not.

DARPA’s 1.8 gigapixel ARGUS-IS: The Ultimate Surveillance System from above?

In the last decade, Remote Sensing resolutions be it spatial or temporal have been getting better and better. Most satellite missions these days have spatial resolution at least in the order of few meters and RADAR satellite missions are able to generate spatial resolutions that are even better than that. But all of this seems “old” in comparison to DARPA’s 1.8 gigapixel ARGUS-IS short for Autonomous Real-Time Ground Ubiquitous Surveillance Imaging System.

ARGUS-IS is being viewed as the ultimate surveillance camera that can help monitor an entire city from 20,000 feet above our heads and on a real-time video basis for an area of 8 Kilometers with resolutions of about 6 inches or 15 centimeters! 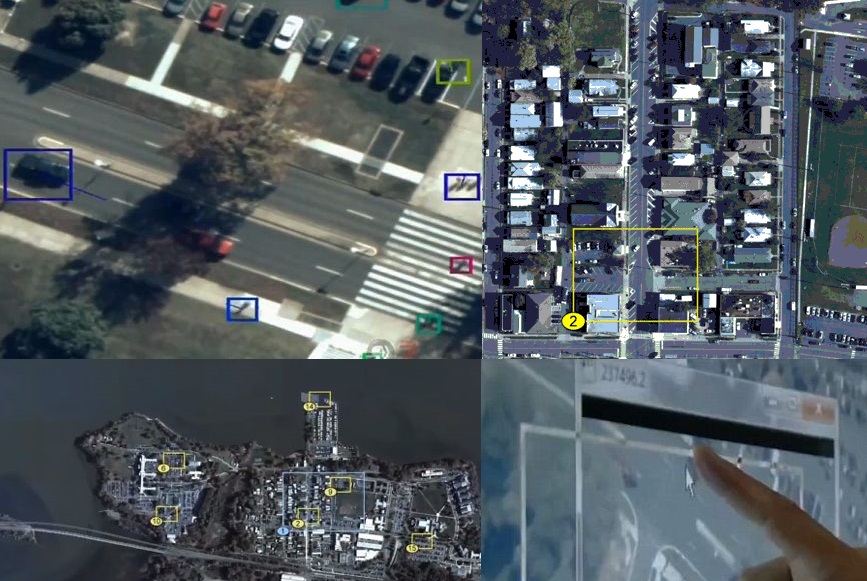 Now 15 centimeters seems like not too much considering you cannot quite read number plates or recognize facial features but this Super Camera from BAE Systems is actually recording every move you make. When this is combined with information from CCTV cameras, “They” can pretty much know where you are at any given time! ARGUS-IS is surely a surveillance system for the entire city. 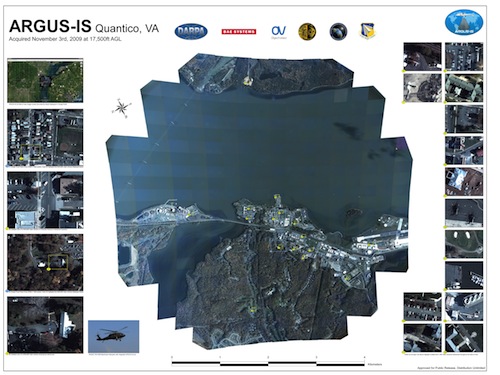 1.8 gigapixels and 12 frames/second, 24/7! Wow! That is surely going to be a lot of data. I am a lousy mathematics student so googled some reports in the internet and that value is about 6,000 terabytes of data/imagery per day. How exactly do you process 6,000 terabytes of data? According to the Lawrence Livermore National Laboratory processing, here’s how you do it – Read here. I even wonder if we will have the technology (in the civilian domain) to send and receive 6000 TB of data in a day using wireless communication in the near future.

Well, I am sure that there are a lot of people who are worried about their privacy and as to how these technologies are going to be used. That’s an entirely different debate and one that I don’t want to go into. Like the saying goes, the military is always 20 years ahead of the civilian. Nevertheless, in the past we have seen several such technologies being put to good use in the civilian domain. I agree with the article “Drones Making a Lot of Sense for Geo-spatials: Thanks to the Military Again” that Iyke posted sometime back in this regard. What do you think?