Are you enthusiastic about location data or anything geospatial, then this is the job portal for you! At Geoawesomeness, we’re working on creating an interactive job portal to connect companies to enthusiastic talent! By the way, we spontaneously post jobs on our LinkedIn throughout the week, so make sure to follow us there!

Here are some of the jobs that are currently available:

The World Food Programme is hiring a GIS Developer! You will be responsible of maintaining and further improve a Web GIS platform implemented by the GIS team for the Logistics Cluster and provide support for the rollout of the GIS infrastructure in country offices and regional bureaux. Qualified female applicants and qualified applicants from developing countries are especially encouraged to apply. Want to find out more? More information here.

UrbanData Analytics are the Global Real Estate Information & Analytics platform that will provide transparency to the Real Estate market and information to the citizens to take better decisions. Want to know more about them? Read our interview here.

If you enjoy the challenges of state-management in user interfaces using a Redux-like approach with RxJS streams, then this position is perfect for you! Apply here.

urbanData Analytics’ stack and requirements are complex. In particular, their engineering team must combine specialists such as frontend, backend or data engineers with more flexible developers. Does that sound interesting to you? Apply for this exciting position here

For more exciting positions in the geospatial industry, go to our job portal.

Say thanks for this article (0)
Joanna Kwong
38 posts
Want to be an author?

The value of mobile phones for responsible policies

The data available to telecommunication operators (aka MNOs) can be very useful. One of the areas for which the data can be uniquely beneficial is population analytics – the movement & habits of populations in the world around us. That is, partially, because of the ubiquity of mobile phones, and partially, because of the extent of existing telecommunication infrastructure. The data contains insight into where each device connected from and how it moved around. And what is lacks in the precision of e.g. GPS, telco data makes up in the sample size and unique national coverage.

This has remarkable implications for use across sectors. The data can be used for international development or to inform the tourism industry. It can help monitor an outbreak of a disease or plausibly determine the number of people at a protest rally. Another example of telco data used for the public good is to optimize a transportation network between several cities by reliably determining population flows and establishing how many people work and/or have their sleeping location in a given city. 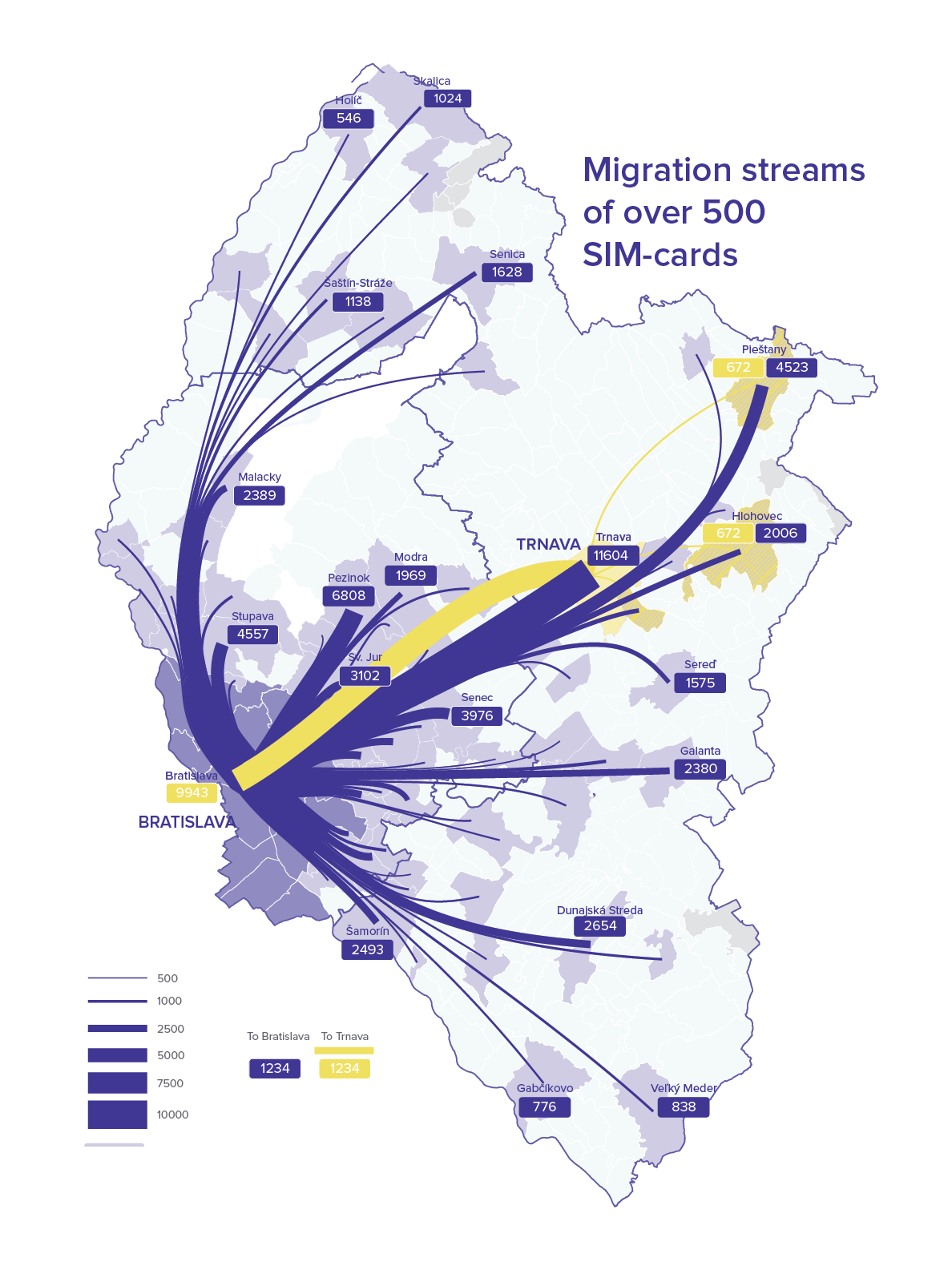 The practical example comes from Slovakia. A big data scale-up Instarea teamed up with Slovakia’s top 3 telco providers (Slovak Telekom, Orange, O2) and the Comenius University (Peter Barlík and Martin Šveda) to provide the Bratislava Integrated Transport (BID) an analysis of commuter patterns in two western-most Slovak regions. The point was to map out the scale and intensity of spatial interactions amongst towns & cities of the region. Or simply, where people live and where do they travel for work.

What do the phones show?

Officially (according to permanent residency statistics), approximately 422,000 people reside in the capital city Bratislava. This number, however, has been long believed to be very unreliable. Bureaucracy and inconvenience cause that many people who live in Bratislava do not register their permanent residence. (In Slovakia, you would need a new ID card every time you move, because it also contains an address. So, residents simply don’t do it.) The city officials knew about this issue but until recently had very few choices than to rely on the official numbers. 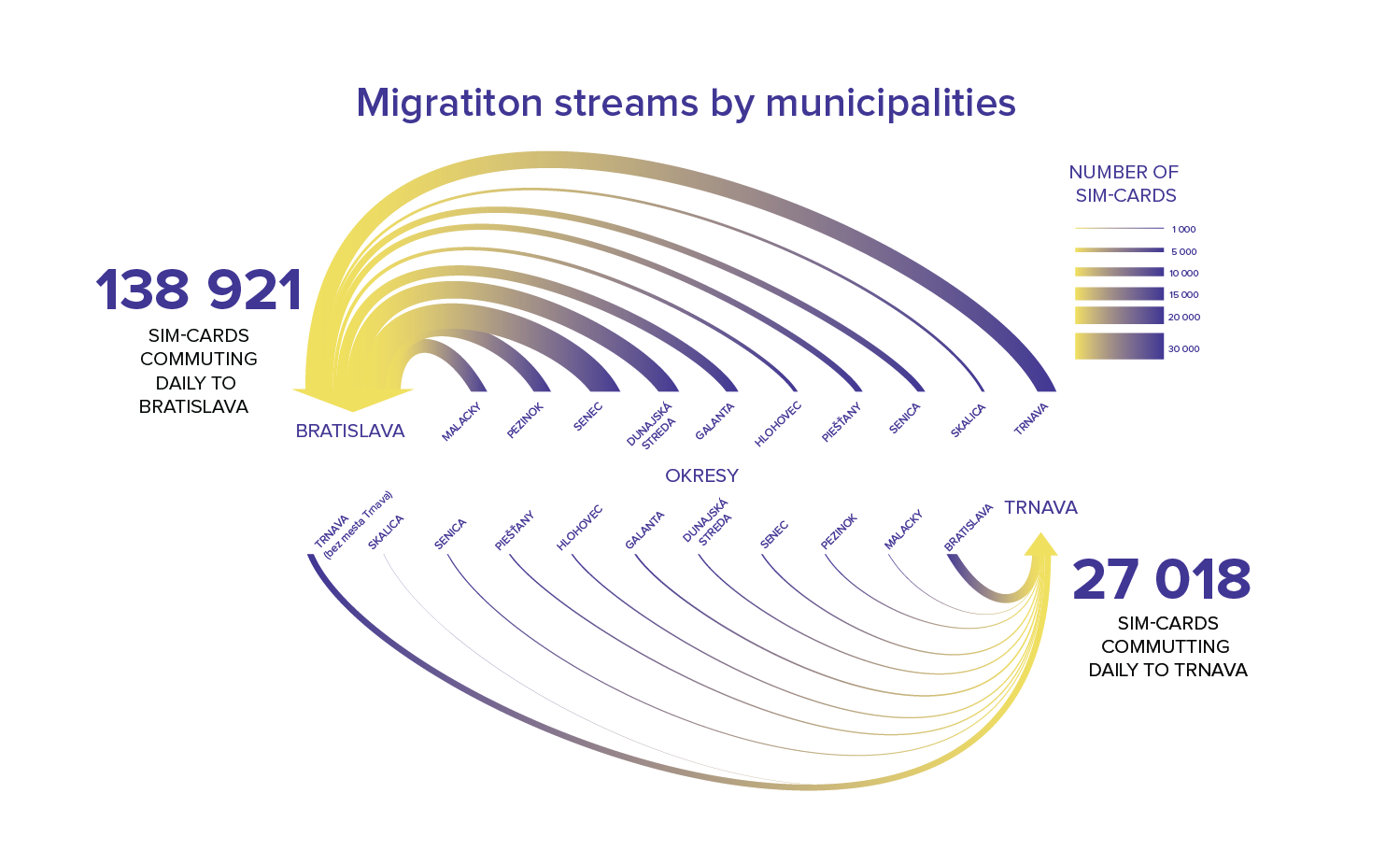 This is quite a bit more significant than it might seem at first glance. One hundred million euro more significant, to be precise. In Slovakia, money is distributed to municipalities by the number of residents and the difference of 200,000 people goes a long way. The first step was to get the insight and now city officials can focus on policies. These can include changing a parking policy (so that people with permanent residence have cheaper parking) or simplifying the process of changing permanent residence.

Sure, SIM-cards are not people. Most people do have a phone, but some phones have two SIM-cards or some people have two phones. The authors of the study acknowledge this limitation, but argue that when you adjust for the people without phones, such as many children and some elderly the number is about right (as has been shown in some previous studies). Also, the study contained data only for Slovak SIMs, not foreign ones of tourists.

Another use of the analysis is an unprecedented understanding of the migration within and between the regions. It would have been very difficult to get reliable information about working and sleeping locations, together with routes taken by any other way. 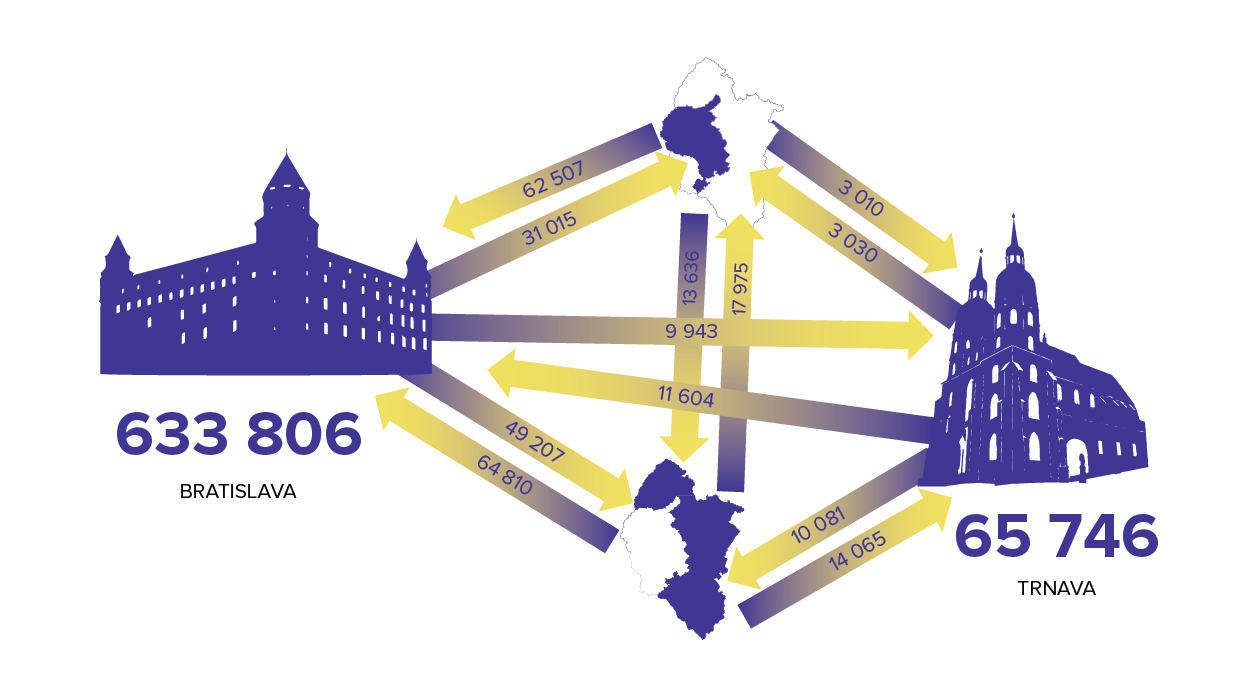 The gathered data will be used as a tool for extending the Integrated transport system in the Bratislava region (IDS BK) to neighboring Trnava region. The mobility analysis also showed that 64,000 inhabitants of Trnava region travel to Bratislava city on a daily basis and, on the other hand, 49,000 Bratislava city residents travel to Trnava region every day. This is important because train and bus transportation is preferable to the car on the regions congested roads. But, people cannot take a bus or a train if convenient links are missing. It is thus vital to understand travel patterns and to make informed decisions in routing, timetables, capacity planning and pricing.

Data insights from telecommunication companies are remarkably useful. Aggregated data is no threat to privacy and is a valuable source of information. The information that can make our lives easier, policies more responsive and the funds allocated by need. What needs more work and thought are proper frameworks to compensate the telcos for the data as well as adjust regulatory policy to make such public-good use of data easier.