To date, the model for geoanalytics has tended to be very transactional: request imagery, analyze imagery, deliver imagery analysis results. Earth Observation is now heading towards a revolutionary model where all data is immediately available, all analysis is performed in near real-time as the data is acquired, and the distribution of the imagery analysis results are streamlined straight into users hands through apps and other channels, ready to be put to work.

In the same way that the integration of many unrelated technologies were integrated together into the creation of today’s smartphones, the future of Earth Observation and geoanalytics will involve the seamless integration of a wide range of technologies, sensing modalities and unconventional data sources.  We can already see how the Internet Of Things (IOT) and remote sensing are converging, with each technology combining in ways that we could only dream of a few years ago.

The explosion in the demand, largely attributable to the compounding effects of global population growth and climate change, to serve the rapidly expanding markets such as agriculture, forestry, energy, water management and insurance, is forcing these markets to look to Big Data to supply better, faster, higher-quality and cheaper access to actionable information. Consequently, as computing power grows according to Moore’s Law, the technological leaps needed to operate on Big Data will, without a doubt, be pushed far harder than Gordon ever envisioned.

Say thanks for this article (0)
Dr. Keith Beckett
1 posts
Want to be an author?
The community is supported by: 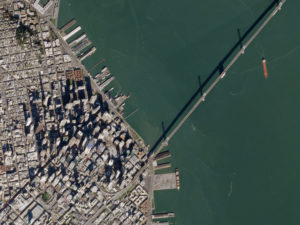 The Planet Labs, one of the leading satellite and mapping startups, announced that it had acquired the Terra Bella – a satellite imaging unit of Google.

Google started its short romance with satellite imagery back in 2014 when it acquired Skybox Imaging and rebranded it to Terra Bella last year. Two years ago Google paid for Skybox $500 million. The value of the deal with Planet Labs was not disclosed, but it must have been way smaller as the startup funded in 2010 would not afford it otherwise.

According to Crunchbase, Planet Labs gathered so far $183.1m in 5 funding rounds. It’s not a lot taking into account that maintaining a constellation of 60 satellites and a few hundred employees generate huge operating costs. According to TechCrunch, the value of the deal is close to $300m, and it seems probable, especially knowing that most of the deal is not cash, but Google is simply taking a stake in the startup. The company has also agreed to purchase satellite images captured by Planet in a multiyear contract.

So why Google decided to sell?

With the formation of Alphabet as an overarching parent company, Google is rationalising its various lines of business. Licensing satellite imagery from a dedicated provider, rather than owning it seems to make a lot of sense. Satellite imaging is a business where scale matters. The more satellites you have, the lower the operating costs, and the higher the temporal resolution you get. In that business, the value comes not necessarily with higher spatial resolution (pixel size) but with providing a very often refresh rate of the same location. Planet Labs co-founder and chief executive Will Marshall wrote in a blog post.

“We’ve long admired what the team at Terra Bella has achieved, and we think the SkySat constellation of 7 high-resolution satellites is highly complementary to Planet’s existing medium resolution 60-satellite fleet,” Marshall wrote. “The former enable regular, rapidly updated snapshots of select areas of the globe at sub-meter resolution; the latter regular, global coverage at 3-5 meter resolution. The two systems under one roof will be truly unique and will enable valuable new capabilities.”

It seems like the future of Earth Observation is just behind the corner.