Majority of the Geospatial students and professionals are interested in developing applications that make use of the location information from the smartphone, be it HopOver or FourSquare or the latest location based game that Aleks wrote about few days back (GPS Tycoon).

Ever wondered as to how exactly your smartphone (or smart device) locates your position using GPS/GNSS?  If you have always wanted to explore and understand the fundamentals behind Satellite Navigation & GPS, then Coursera MOOC “GPS: An Introduction to Satellite Navigation, with an interactive Worldwide Laboratory using Smartphones” is going to be of interest to you.

It’s a six week course that starts today 13th October, 2014.  The MOOC is divided into 2 parts and Prof. Enge and Dr. Diggelen from Standford University will be delivering the lectures.

Part I. Fundamentals of GPS Introduction

The course is interesting as it not only discusses the basics of GPS and how it functions but also gets into the fundamentals behind Orbits and Receiver technology. In short, this is a really interesting course for anyone who wants to learn about Satellite based Navigation and Positioning.

Rosetta Mission: All geared up for Landing on the Comet

Science fiction was there first though, remember the book by Greg Bear called “EON“? It sure does feel like Science fiction – Chasing Comets and landing on a probe on it! But all this for real and The Rosetta Mission is already the first mission to rendezvous with a comet, the first to follow a comet around the Sun and sent back pictures of it. It took over 10 years and 4 billion miles for Rosetta to get to Comet 67P. It had to hibernate for 957 days to accomplish all this.

The lander, Philae is equipped with a camera and will take a 360-degree panorama of the comet surface. Besides measuring the gas pressure and dust distribution at the landing site. It will also drill beneath the surface of the comet and analyze the material. Comets are considered as “pristine planetary building blocks” and all this investigations will hopefully throw more light into the history of the universe and the role that comets played in shaping life on our planet.

So where is Philae going to land?

ESA has decided to land Philae on Site J after a lot of consideration. The site has been chosen as it is relatively flat with far lesser cliffs in the terrain. But the landing is going to be anything but easy. Remember, this is a comet that is constantly rotating as well. The Comet completes a full rotation in about 12.4 hours. So when Philae is actually descending down to the surface, the landing site would be in the opposite side of the Comet! Well, this could be the most complicated landing in the history of our space programs. 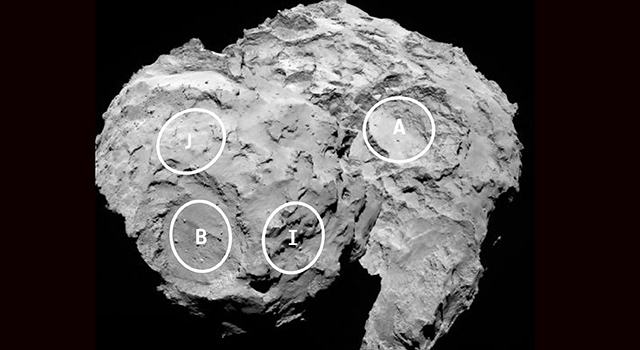 At 08:35 GMT,  the landing sequence will begin and Rosetta will release the lander , Philae at an altitude of 20 kilometers above the comet. Philae is expected to arrive at the surface of the comet 67P at 15:35 GMT i.e. 7 hours later. During the 7 hour descent, Philae’s ROLIS camera is set to take a series of photos of the comet. If you are interested in learning more about the site selection, read this article by NASA.

Here’s a nice video by ESA regarding the descent and science on the surface of the comet.

This is by far, the most exciting space mission in recent years. In my opinion, this is right up there with NASA’s Apollo Missions! Landing a probe on a Comet after 10 years and 4 Billion miles. Who would have thought of that! A new era in Space exploration is well underway! Rosetta Mission all geared up for Landing on the comet on 08.35 GMT, November 12th, 2014! Are you? 🙂