Drones are one of the fastest growing tech sector. Millions of these devices are flying around skies around us and the number of new units is growing exponentially. This is why the drone traffic management system is on everyone’s lips. FAA and NASA are working with  hundreds of researchers and multiple companies to bring this concept to life.

One of the teams from the Stanford Intelligent Systems Laboratory has come up with an interesting research paper. They developed a quick decision process which could be used to reroute drone trajectory and avoid collisions. The team ran over a million simulations testing different scenarios where conflict included between two and 10 devices. UAVs were provided with varying levels of information about each other and then were tested on their behaviour, response time and how often they ran into conflict.

“The Stanford researchers found that drones could make the quickest decisions when they were paired with the closest other drone, and the two solely considered the other’s behavior. The slowest response occurred when drones considered their own surroundings and then fed their results into a central system that sent decisions back to the entire group. Decision time always increased as more drones entered the simulation, but the system was always able to make a decision on rerouting a drone within 50 milliseconds.”

The researchers also found that drones communicating to a central decision-making system came to the slowest decisions. They were however less likely to encounter conflicts, which at the end made them safer. 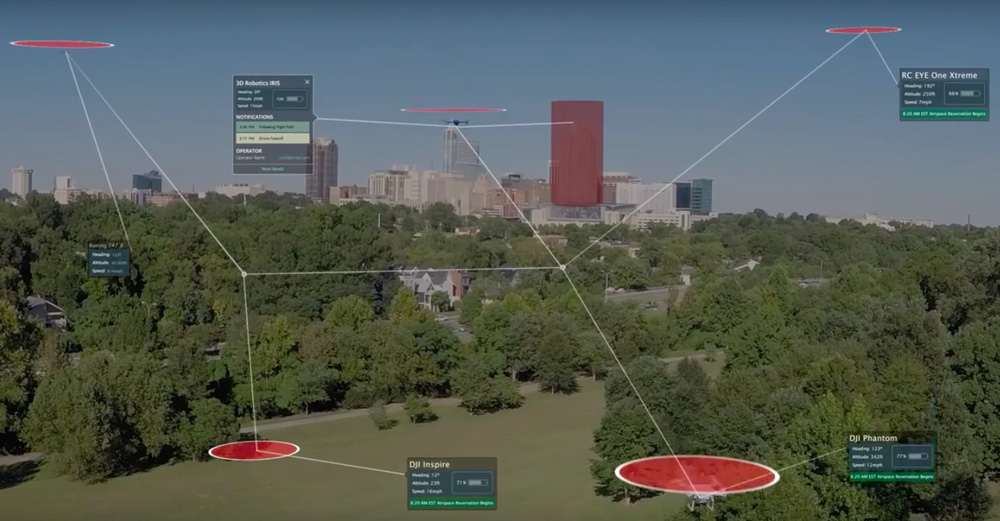 One of the most advanced drone air traffic management system has been developed by UAV software and services company PrecisionHawk. Their LATAS (Low Altitude Traffic and Airspace Safety) system has been tested by FAA with great results. The system can have a drone automatically take actions such as landing or turning around if it gets too close to a forbidden area such as an airport, or if a conventional aircraft suddenly appears. The system can use the cellular network, satellite links, or standard aircraft location beacons to monitor and communicate with drones.

The drone traffic management system will be most likely under development for the next several years. There is no single common standard yet and multiple market players would like you push their solution to win the race. Today PrecisionHawk is in the lead but the situation might change soon as it often happens in such a young and dynamic industries.

Last week the New York Public Library released a huge collection of over 180,000 digitaized maps, images and other resources.  Basically all out-of-copyright materials in NYPL Digital Collections are now available as high-resolution downloads. Without any permissions or restrictions. You can use everything!

And there are quite a lot of resources to be used. I got 24,213 results when searching for the term “Map”. When you browse it for a while you can find a real gems like “The Brooklyn of the future” map from 1903. 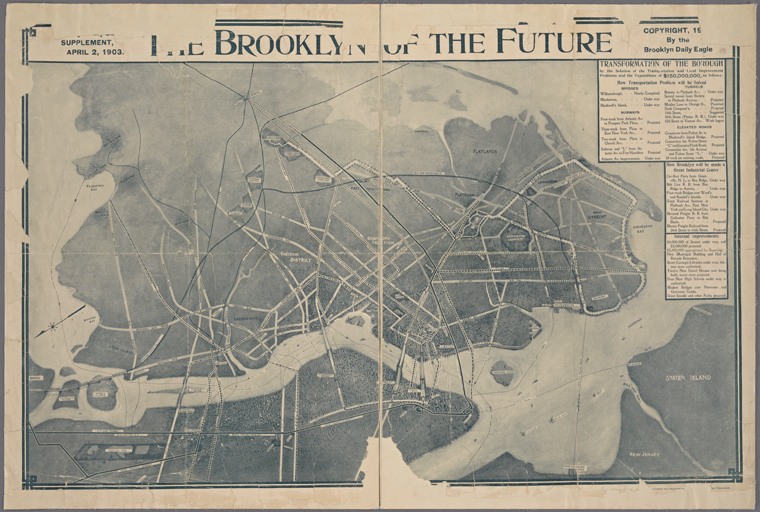 Digitizing millions of maps, pages and images has been happening in libraries, museums and other institutions for at least a decade already. But the NY library’s initiative brings it to a totally new level. It actually stimulates to what happens next with the data.

“We see digitization as a starting point, not end point,” said Ben Vershbow, the director of NYPL Labs, the in-house technology division that spearheaded the effort. “We don’t just want to put stuff online and say, ‘Here it is,’ but rev the engines and encourage reuse.”

Developers can use on the public domain files as machine-readable data, using the library’s open software interfaces or their own tools. To provide inspiration for reuse, the NYPL Labs team has released couple of cool demonstration projects. My favourite one is comparing Fifth Avenue images from the beginning on the XX-th century with corresponding Google StreetView images from 2015. Another awesome tool is a visual browser allowing users to explore the public domain collections at scale.

NYPL gave a great example of how public institutions should open their resources and share the knowledge which was stuck somewhere between shelves, covered in dust for decades. We are sure that GeoGeeks will find some awesome applications for all this maps and other resources.