Barnes & Noble’s Nook gets Navigation, Maps and LBS. What will Amazon do? 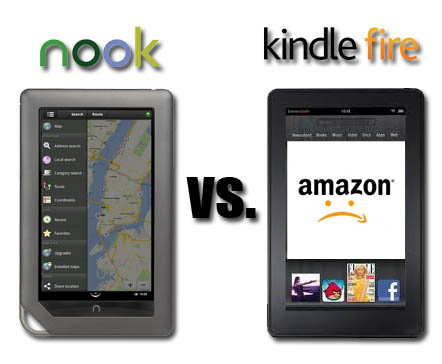 Generally people like me who lives outside US don’t give a damn about Nook because it’s not officially available in Europe . We do use Amazon’s Kindle (although Nook is far much better looking), and we like it but there is one thing about Kindle Fire that I hate – there is no mapping app besides Google Maps and there is no positioning.

This week Barnes & Noble’s announced that their Nook colour, although not equipped with GPS (the same as Kindle Fire) will have fully operational WiFi based mapping functionality including navigation, mapping and Locaiton-Based Services. While Google and Apple are fighting with each other Skobbler –  company creating solutions based on Open Street Maps – partnered with Barnes & Nobel and launched ForeverMaps 2 for Nook. There is  rout guidance, world-wide online and offline maps, and what’s important is open for 3rd party developers to make LBS apps. The problem is lack of 3G therefore the positioning doesn’t work without WiFi.

Well to be honest it’s nothing cool in the era of Street View like services but it brings strong competitive advantage to Nook over Kindle. Now the only question is: what will Amazon do? And we are all looking forward to see that.

Geo-tagged Tweets can predict when you’re about to get sick! 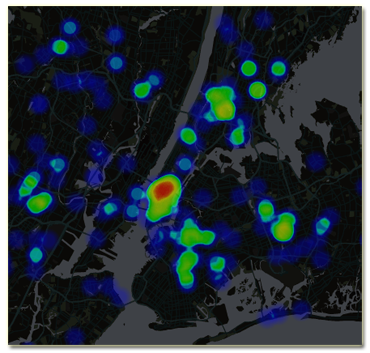 Scientists from the University of Rochester in New York made really cool experiment. They’ve analyzed stream of 4.4 million geo-tagged tweets from over 630,000 users in the New York City over one month in 2010. They have applied trained a machine-learning algorithm to differentiate between tweets by healthy people – who might say something like “I am so sick of this traffic!” – and someone who is actually sick and sharing their flu symptoms via Twitter.

“Given that three of your friends have flu-like symptoms, and that you have recently met eight people, possibly strangers, who complained about having runny noses and headaches, what is the probability that you will soon become ill as well? Our models enable you to see the spread of infectious diseases, such as flu, throughout a real-life population observed through online social media. ” – said Adam Sadilek – one of the researchers. Scientists claim that they are able to track with nearly 90% accuracy and almost 8 days in advance when are you going to get sick based of time and place where you’ve been twitting. Crazy idea.

Of course the system and its predictions is limited in many ways. First of all majority of people (including me) don’t tweet about their symptoms and even if they do the system will never automatically capture every relevant source with you can see by playing at the project website.  Second of all most of the tweets are not geo-tagged which is a strong limitation. Finally I don’t believe the numbers… 90% accuracy, 8 days in advance… a little bit optimistic taking under consideration that the only source of knowledge is tweeter.  There also some more reliable outcomes of the project for example it has proved from tweets that people who go to the gym regularly are moderately less likely to get sick. From the other hand people with low socio-economic status, are much more likely to get ill.

I think that the number “90%” was published to make a little bit of PR around the project. I mean it’s possible for maybe for a few twitter addicts by not for general public. In fact, this is not the first project that tries to contribute to this issue. Google Flu Trends, for instance tracks how often people search for “flu” and related terms on the search engine and uses that information to provide info how the flu is spreading around spatially and temporarily.  Anyway I think that it’s great that there are projects like that. Maybe one day when all the sources will be merged it will bring something more that publications in scientific journals. Let’s hope so.