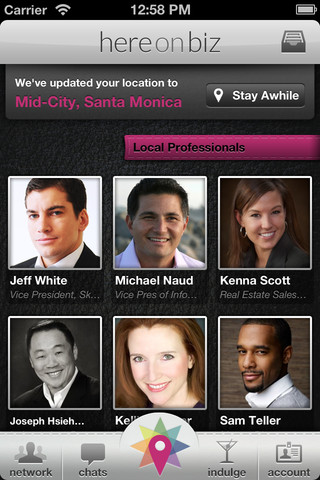 LinkedIn is a great service but surprisingly it lacks of the most basic feature – geolocation. How is it even possible that such a giant in professional networking didn’t implement location-based functionality in their mobile app? Unimaginable!

But there is a solution – a new location-based iPhone app – HereOn.Biz that allows you to log in via your LinkedIn account and check other App users (LinkedIn memebers)  in your area. Though there are other apps that allow you to see which of your friends are nearby, start a conversation and find a local meeting place- Here On Biz is the first app to do so in a strictly professional context.

You can see how many of your LinkedIn connections also are using the app, as well as people near you using it who aren’t yet connections. If they look interesting, you can request a connection with one tap. Another cool stuff is that it organizes App users around you into groups: those who are local to the area, those who are visiting and those who are attending particular local business meeting, conference or convention.

Another great thing is that it does not invade your privacy. It doesn’t show your precise location but rather the general neighbourhood which is more than enough to set up a business meeting when you have free lunch time.

Every business professional knows the value of networking but from my experience you do 90% of business after face-to-face meetings if you can get them. Hear on Biz helps you get those meetings. I’m going away in business this week, and I’m wondering how it look like in practice:).

GPS vs WiFi Positioning Accuracy. Study Made with Yelp Check-Ins. 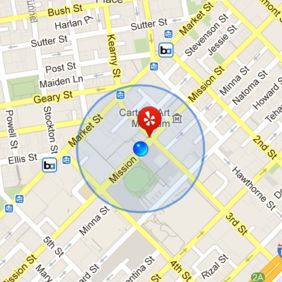 How to use data from millions of check-ins from Location-Based Social Networks? Yelp did a cool study based on its data. They’ve compared positioning accuracy by technology and by type of devices devices. Check out their cool study:

A phone can figure out its location in several ways: by using GPS, cell tower triangulation or Wi-Fi positioning. GPS connects to satellites orbiting the Earth, and figures out where it is compared to the satellites. Cell tower triangulation connects to nearby cell towers, and performs a similar calculation. Wi-Fi positioning depends on companies like Skyhook, who record the locations of Wi-Fi networks. Your phone can then look at nearby Wi-Fi networks and figure out where it is.

Android smartphones and iPhones can use GPS, cell tower triangulation and nearby Wi-Fi networks to get a precise fix. On the other hand, iPods can only use Wi-Fi positioning. By comparing iPods to Android and iPhones, Yelp was able to see how accurate Wi-Fi positioning is in comparison to a mix of all three techniques.

After gathering all the data from June, Yelp graphed a probability distribution function of check-ins versus distance in order to see the distance between users and the businesses they’re checking in to. This graph shows the percentage of check-ins attempted (y-axis) at a given reported distance from a business (x-axis). Check-ins from iPhones tend to be closest to the business, followed by Android phones and iPods. 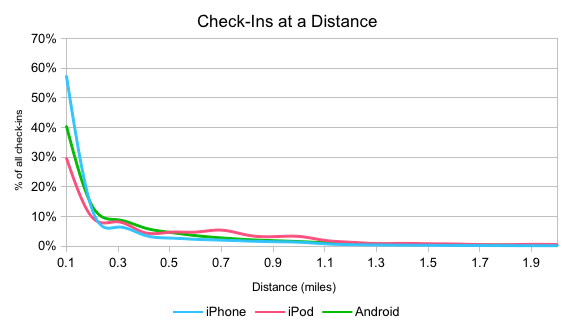 For example, 40% of Android check-ins are less than 0.1 miles away from the business.

Next they converted this graph into a cumulative distribution function, in order to see how many Yelp check-ins occurred within a specific distance from the business. iPhone fared better than Android, likely due to lower-quality GPS chips in some Android devices. For example, 7.5% of Yelp check-ins from Android, the phone thought that the user was actually more than two miles away from the business, while only 4.5% of iPhone check-ins were that far away. 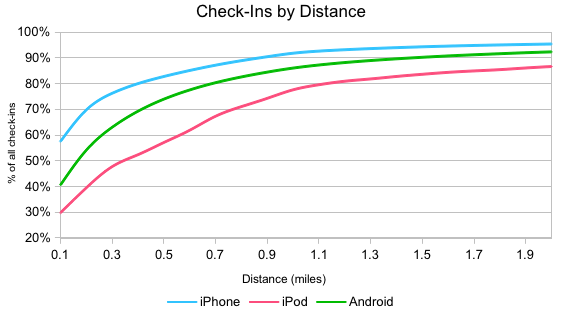 For example, 79% of iPod check-ins were less than one mile from the business.

When checking in, Yelp also record the reported location inaccuracy. This number represents the phone’s best guess at the number of miles it might be off by. They account for this inaccuracy by subtracting the number from the distance to the business. This way users don’t miss out on the chance to check in. 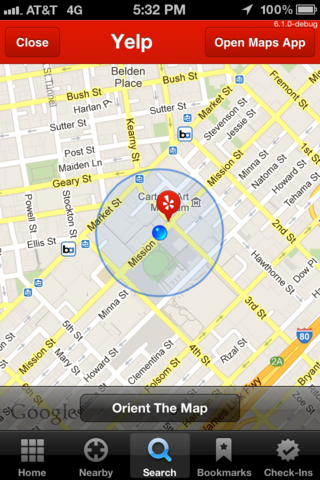 The dot shows your reported location, and the larger circle represents the inaccuracy.

Android devices gain the most from this comparison, although iPhones still have better location services overall. However, the iPod line barely moves – the reported accuracy is always close to 0. 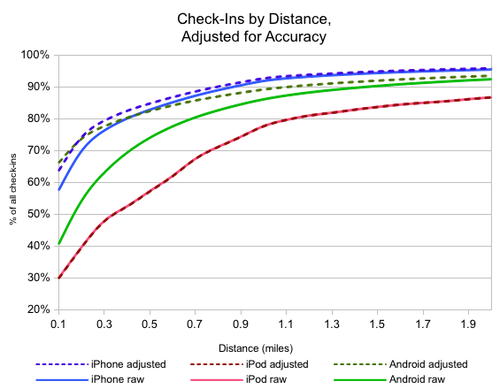 For example, 90% of Android check-ins were less than one mile from the business after adjusting for the accuracy radius.

iPhones consistently have the most accurate positioning, with a fairly small accuracy radius. Android phones are often inaccurate (likely due to lower-quality GPS chips in some Android devices.), but reliably reported that inaccuracy. And finally, iPods using Wi-Fi positioning proved the least accurate and usually reported incorrect accuracy radii.