Light Detection and Ranging (LiDAR) belongs to one of those remote sensing technologies that have celebrated tremendous improvements within the last decade rendering it a practicable tool for public and private use. LiDAR measures varying distances between the sensor and the earth using light in form of a pulsated laser. The time difference between the emission of a laser pulse and the receipt of its reflected signal from the earth’s surface makes up the important height information of the terrain. The LiDAR sensor consists of a laser, a GPS receiver and a scanner for use over a wide area and is typically installed on an aircraft or helicopter. Particularly the improvement of the receivers, which today distinguish the backscattered signals at an accuracy of ns (nanoseconds), render the LiDAR technology highly usable for practical purposes due to an improved vertical resolution.

ADVANTAGES OF LIDAR
I already reported on the application of LiDAR in wind remote sensing related to the installation of wind parks. Another area, where LiDAR is gaining significant impact is the study of archaeological sites. LiDAR delivers a highly accurate digital elevation model of the scanned territory; the resolution is accurate down to the cm level vertically and to one meter horizontally. Another advantage is the penetrability of forest areas. From the 20.000 to 100.000 of laser points per second most will touch the leaves at different tree height levels, but at least a couple of laser pulses will always reach the ground scanning the relief of the earth’s surface unless the vegetated layer is extremely dense as for instance in tropical rainforests.

ARCHAEOLOGY
For an archaeological study site in New England scientists from the University of Connecticut under guidance of Katherine Johnson profited from that feature: The region is heavily forested today, which makes it difficult for archaeologists to get a better understanding of how the landscape looked like in colonial times. In the 18th century New England’s landscape was brightly covered by roads, farm walls and homesteads built by the first European settlers in North America. After 1950 the area was widely abandoned and re-conquered by forests making it impossible to see any structures those people left. The use of LiDAR finally enabled to penetrate the forest layer and reveal human structures as building foundations or stone walls creating an impression of how the terrain was organised, which could have never been accomplished without this technology. Suchlike, scientists uncovered subsistence farming in New England, something many people have no idea existed. The GPS coordinates of the LiDAR facilitates to walk in the woods and find any scanned structures desired. 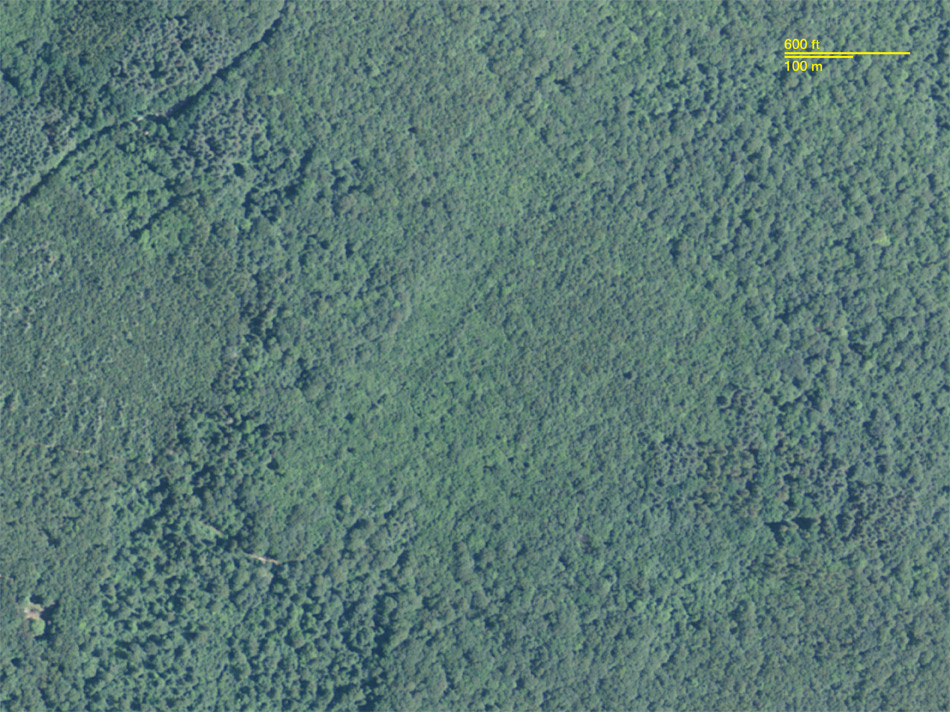 A study site in New England showing a true colour satelite image (above) and a LiDAR image from the same area (bottom). The LiDAR reveals the tracks of former civilisation that left building foundations, stone walls and roads behind and that can be observed in the relief. Source: National Geographic 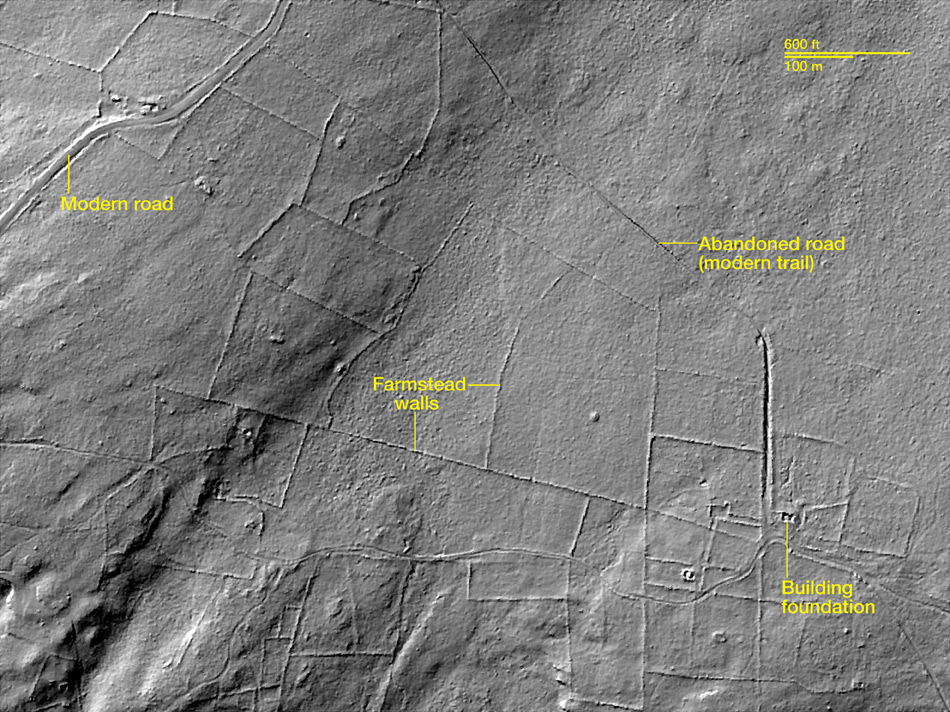 Beyond the application in New England, LiDAR has been used to help researchers uncover ancient Maya buildings, roads, and other features of this civilization and even create a three-dimensional map of a Maya settlement in Belize. LiDAR has also been employed in order to get high-resolution models of Renaissance palaces, like the Salone dei Cinquecento in Florence Italy. In England, LiDAR is being used to discover new sites in the plains of Stonehenge. 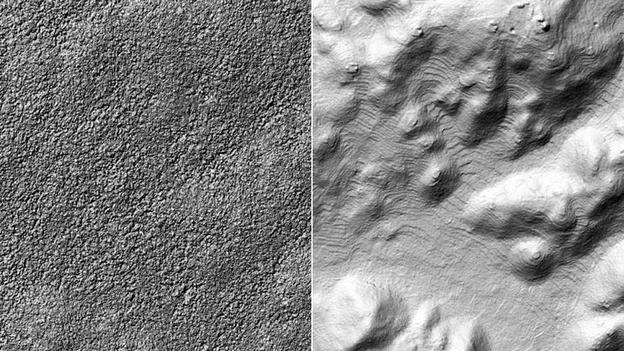 Mayan city of Caracol, Belize, which is obscured by dense forest(right) that make traditional techniques difficult to apply. Source: BBC 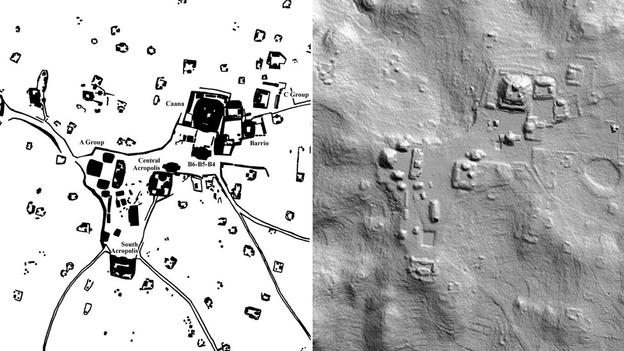 Lidar imagery demonstrating canopy penetration in open woodland in Savernake Forest. The image on the right hand shows the first return of a LiDAR from the tree crown and resembles an aerial image. The left image shows a filtered version, where only the ground signals were considered, which make up the terrain. The image reveals the presence of an Iron Age enclosure. Source: English Heritage

Overall, LiDAR is becoming a meaningful research tool in archaeology for understanding those civilisations that left permanent structures behind. For me, the use of LiDAR is a wonderful example of how ‘exotic’ the applications of remote sensing can become.

GNSS Reflectometry: Making use of Multipath for altimeter measurements!

Ask any Geomatics student about GPS/Global Navigation Satellite System (GNSS) Signal Multipath and the first answer you would hear is “Oh, multipath is bad for position accuracy”.

“One man’s noise is another man’s signal” – Anonymous

What is Multipath and Why does it affect the accuracy of your GPS/GNSS receiver?

Our GPS/GNSS receivers use the signals sent by the GPS/GNSS satellites to measure the distance between the satellite and themselves using the time taken by the signals to reach the receivers which in turn is used to compute our position. So the key here is the distance. Now when you have signals being reflected from buildings, trees, etc then this leads the receiver to calculate the distance incorrectly because the reflected signals travel longer than the unreflected signals. This unwanted effect is what is termed as Multipath.

Obviously because there is an error in the calculation of the distance which is fundamental to the GPS/GNSS receiver to calculate your position, it affects the position accuracy.

So Multipath is bad and is useless right? Well, yes and no. Yes it is useless for Position Navigation Time (PNT) applications like your Car Navigation device, smartphone and so on but no it is not completely useless. As students and GNSS professionals, we are time and again told multipath is bad and it is true as well, so no one really thinks about using it in any sense. Thankfully not everyone thought so! Enter GNSS Reflectometry (GNSS-R).

The principle behind GNSS-R and its areas of application:

GNSS-Reflectometry uses the multipath signals (hurray!) from GPS/GNSS satellites! Imagine having the GPS/GNSS receiver in a upside-down fashion looking at the earth. It can track and receive only signals that have been reflected from the surface of the earth i.e. those “useless” multipath signals. Imagine this receiver fitted onto a satellite flying over the earth in a low-earth orbit that keeps tracking all these multipath signals over ocean surface. Researchers have done this in an experimental basis and the results look really promising. Using it over land is a bit more complicated as the reflected rays cannot be accurately traced back to their origin, however it is much more easier to do that over the ocean surface.

Well, I really want to be “geo-nerd” and explain everything with equations but remember the book “The brief history of time” by Stephen Hawking? The great man in his author note “says he was told that for every equation, he included in his book, his audience would reduce by half…”! Hmm, interesting thought. I’ll leave it to the GeoGeeks to google the equations then 😉 If you are interested in learning more, have a look at the links – Concept, ResearchPaper.

Such a technique will enable us to measure the wave heights in oceans, as a tidal gauge system and for early tsunami warnings. Although there are several dedicated satellite missions operating in the RADAR frequency that is currently being used for measuring them, the GNSS-R is a promising technique and is yet another addition to the long list of applications that utilize GPS/GNSS service. Interestingly NASA is already using a similar approach to measure hurricane wind speeds (read more).

Last but not the least, I wish to thank Dr. Nico Sneeuw, University of Stuttgart for making me aware of GNSS Reflectometry, it’s concept & application and for providing all the information in this regard 🙂