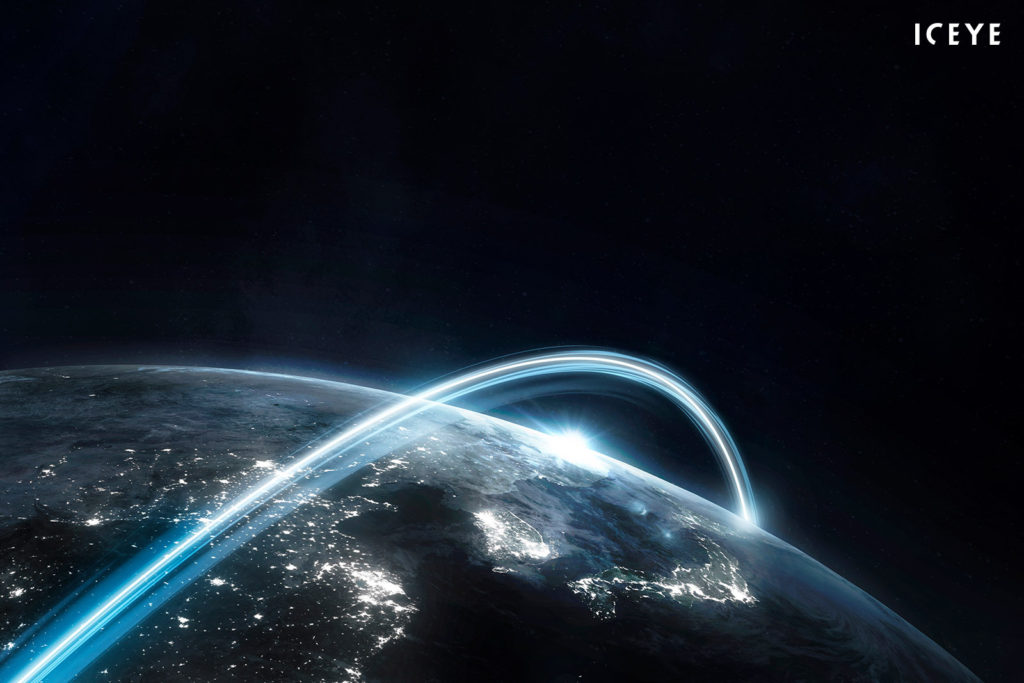 Huge news for the development of synthetic aperture radar (SAR) satellite-based solutions. A Finland-based satellite startup ICEYE has just announced a $136 million Series D funding round. With this latest funding round, the startup has raised a total of $304M in financing since 2015.

Since the first satellite launched four years ago, the company managed to successfully launch 16 satellite missions, making it the world’s largest constellation of SAR satellites. ICEYE helped to demystify radar sensor technologies that were previously used only for scientific research and military purposes, utilizing the fact that SAR doesn’t care about daylight or cloud coverage.

The company is focused not only on capturing satellite data but also on building the solutions. The company is currently focused on its Flood Monitoring Solution that offers the insurance and reinsurance industry a near real-time flood extent and depth data product, with resolution at the building level, all available within 24 hours of a flood event.

Interestingly the company is tracking weather data around the world that may trigger the flood event and they make sure to task satellites to focus on imaging these specific areas of interest. Once the event happens the company combines the SAR imagery with other data sets, including aerial imagery, open-source images, river/tidal gauge data, watersheds, and digital elevation models, to perform rapid analysis of the flood extent and depth for most affected regions, including the level of depth for individual buildings, which very interesting.

The financing will further accelerate the continued expansion of their satellite constellation, and the growth of ICEYE’s Natural Catastrophe Insights and Solutions offering.

Founded in 2014, ICEYE was a spin-off of Aalto University’s University Radio Technology Department. After eight years of development, they become the best small satellite start-up in Europe. ICEYE launched its first satellite ICEYE-X1 in 2018. This satellite was the first satellite (70 kg) under 100 kg to carry a SAR sensor. Currently, ICEYE has 16 satellites in orbit and plans to launch 9 more by the end of this year.

The revenue of ICEYE from 2020 to 2021 has been about 400%. In 2021, ICEYE set up its U.S headquarters in Irvine last year. ICEYE designs, manufactures, and operates its SAR satellites in-house, with manufacturing timelines brought down to a few months for its spacecraft.

Say thanks for this article (0)
Nianhua Liu
8 posts
Want to be an author?

#Capella Space #ICEYE #SAR
Everything you ever wanted to know about SAR satellite data and the ecosystem but were afraid to ask
Nianhua Liu 04.18.2022
AWESOME 0

The possibilities of what can be achieved with the use of Earth Observation have just become much more interesting. In November 2021, Airbus announced the availability for commercial operations of its second Pléiades Neo 30cm-resolution satellites—the most advanced, very-high-resolution optical constellation to date.

In the competitive 30cm resolution landscape, Pléiades Neo seems to be ahead of the industry in nearly every aspect, such as spatial, spectral, temporal, and positional resolution. Arguably the most exciting aspect, however, is the visual quality of the data, which is simply stunning. The images are razor-sharp—to the extent that for many use cases they are comparable to aerial data, rather than that of other satellite constellations.

The first two satellites (of the planned constellation of four are now in orbit, and the first imagery data is already available. Another two satellites will be launched over summer 2022 and available for imaging in Q4 2022, making Pléiades Neo the largest very-high-resolution constellation so far. The system has also been designed in a way to enable 2–3 passes daily over any part of the world, allowing more frequent monitoring. Moreover, the data will be captured at the same time each day, which will make it easier to monitor and detect changes in areas of interest.

The constellation will capture over 2 million km2 of land every day. The native location accuracy of the data will be at the level of 3.5m, which means measurements will be much more accurate than before, and overlaying data on top of each other for comparison or change detection will also be more straightforward—also enabling much more automated solutions.

The spatial and spectral resolution

Red Edge and Deep Blue are two additional bands on Pléiades Neo compared to its predecessors Pléiades and SPOT. The idea behind adding these spectral channels is to unlock new, interesting use cases for the data compared to older generation satellites: Red Edge is designed for vegetation analysis and will support improved crop health and vegetation status through photosynthesis characterization, whilst Deep Blue is intended for hydrological and bathymetry applications, allowing deeper penetration in water bodies for a clearer understanding of waterways and improved safety in maritime navigation.

Additionally, the data can be ordered as stereo and tri-stereo, creating the potential for entirely new applications related to Digital Elevation Models. Once the entire constellation is online, Airbus plans to release a global DEM product at/of 50cm grid spacing—which will be unprecedented. It will create dozens of new possibilities for asset inspection, mining, power and utilities, construction, and many other sectors. Airbus hasn’t yet revealed how often it plans to update the dataset, but one can only imagine what we might be able to learn about some of the processes happening on our planet using global change detection of such accuracy… It’s truly amazing. The new DEM is expected to launch in 2022.

Also creating exciting new possibilities for the industry is the advanced tasking feature, radically increasing the speed at which data is available. From the moment the satellite is tasked to the data arriving on your computer takes just 30 min —imagine how useful that could be in emergency response and natural disaster scenarios. Alternatively, the data capture can be scheduled for any moment in the future, based on selected parameters.

In the civilian Remote Sensing space, a two-hour lead time can be considered ‘near real-time’. 35 years ago, Airbus was the first to offer satellite-tasking services, revolutionizing the satellite imagery market, and once again they are pushing the industry forward. Geoawesomeness has not tested this function yet, but according to Airbus, you can task the satellites directly via their OneAtlas portal.

Cloud coverage at a minimal rate

With such an approach, the company targets to offer below 10% cloud coverage for 70% of images—a big improvement on the industry standard (for comparison, the rate is 50% for Pléiades’ older generation satellites). This is particularly relevant for imagery of course, where users will have a much higher chance of getting cloud-free images for their area of interest.

Airbus has been one of the pioneers of the space industry, providing satellite imagery for more than 35 years. Perhaps not surprisingly, the business model of providing satellite imagery has evolved a lot in that time, but because it’s such a huge project, launching a satellite has historically been a joint venture of some combination of companies, organizations, and governments. Pléiades Neo, therefore, represents the second time (after SPOT 6) that Airbus has funded and launched an end-to-end constellation entirely independently. This gave the company full control over the entire process from creating the satellite hardware and sensors onboard, operating the ground stations which download the data, post-processing the data, and offering the data to clients via OneAtlas.

Owning the entire value chain offers new technology and business model opportunities, as well as reducing the dependency on governments (for example), which means that we are likely to see far more innovative uses of this data—as well as greater data availability more generally.

Getting the data via OneAtlas

In fact, data availability has been always a challenge for the geospatial industry. It’s very difficult to get your hands on it, as the purchasing process takes an age. Airbus aims to change that with their OneAtlas platform, which offers the opportunity to access, process and analyze their data, and use it to develop new solutions. In addition to allowing users the option of browsing satellite data archives and tasking satellites, it also features predefined analytical models—for example, infrastructure change detection, vehicle detection, aircraft detection, and land-use change detection, among others.

OneAtlas gives access to a wide range of satellites operated by Airbus, beyond the Pléiades Neo constellation. The optical satellites range from 30cm resolution (with the arrival of Pléiades Neo) up to 22-meter resolution with DMC. This includes the previous Pléiades constellation (at 50cm) and SPOT 6 and 7 (at 1.5m, with archives going back as far as 2012), as well as other satellites like Vision-1 (90cm data). Airbus also offers images from synthetic aperture radar constellations, from 25cm to 40m resolution. 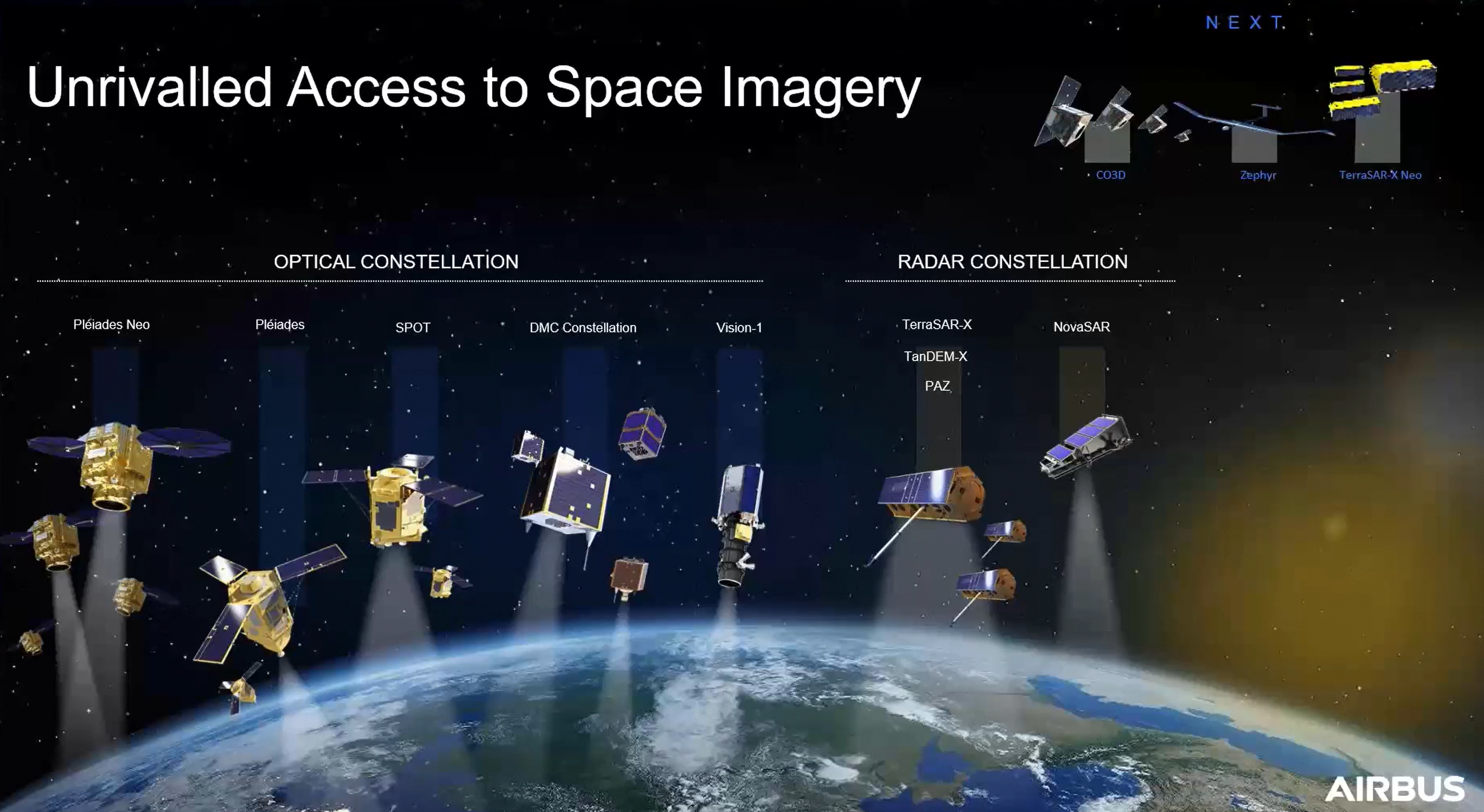 With a 30-day free trial, OneAtlas is definitely worth trying out. The pricing after that is offered at either a pay-as-you-go model (useful for smaller projects) or a subscription model (which might be more useful for heavy users).

The Pléiades Neo has only just launched, but looking at the razor-sharp satellite 30cm imagery with 3.5m location accuracy, capturing any point on Earth at least twice a day, one can’t help but marvel at the possibilities it offers. It’s an exciting time for anyone thinking about the geospatial applications and services that can be built on top of such data.

With satellite data more readily available and the use of analytical technologies and Deep Learning becoming more democratized, it seems that there are huge opportunities for us to harness that data and develop complementary applications and services, which will disrupt how things are being done today. It’s time for the geospatial sector to innovate.