Boundlessgeo and Mapbox have entered into a strategic partnership integrating Mapbox base maps within the Boundless Connect ecosystem. The partnership means that Boundless Desktop users now have easier access and integration of Mapbox’s different base maps including Mapbox Streets, Mapbox Satellite Streets and Mapbox Light & Dark inside their current environment.

The integration makes it a whole lot easier to get Mapbox base maps inside your QGIS development environment and in the future, the two companies are also planning to bring Mapbox’s routing and geocoding services to Boundless Connect. 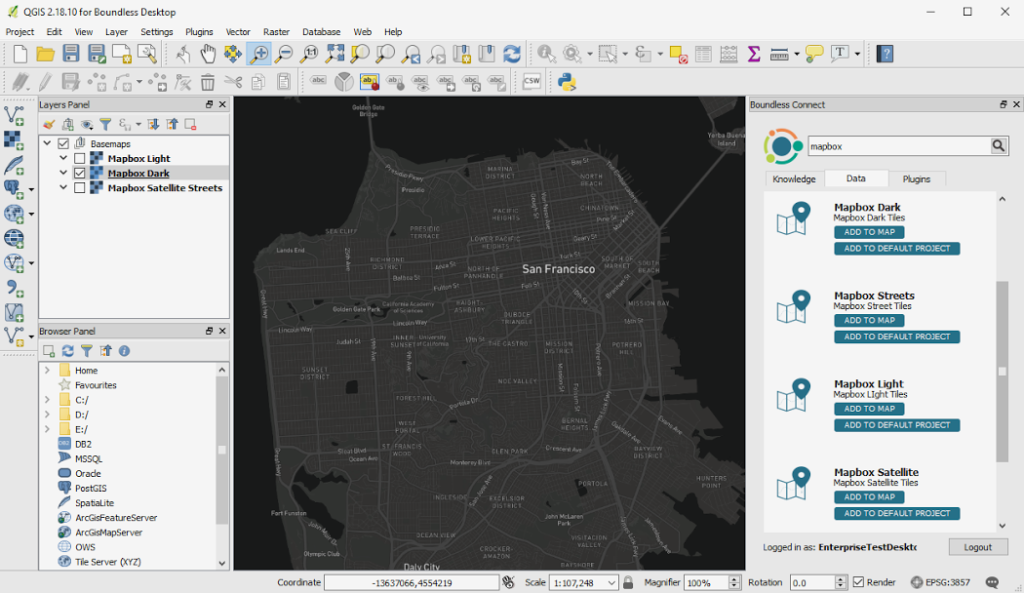 Mapbox Light and Dark BaseMap inside the QGIS environment

“Partnering with Mapbox has been phenomenal and will only add value to our users. Making this data and content easily accessible through the Boundless ecosystem allows for significant productivity gains and unparalleled flexibility to our customers.” – Andy Dearing, CEO Boundlessgeo.

In a sense, you can term this partnership as “Open Source meets Open Data.” Mapbox has been championing the cause of OpenStreetMap since years, and Boundlessgeo is, without a doubt, one of the biggest champions of Open Source GIS. With this partnership, it’s going to be a lot easier to use OSM data inside QGIS and other Boundlessgeo products.

Granted, it’s just base maps and some POI data in the form of Mapbox’s satellite street data layer at the moment, but things are going to get interesting when the partnership between the two companies also extend to routing and geocoding.

Couldn’t make it to Jack Dangermond’s #EsriUC 2017 keynote? Read this. 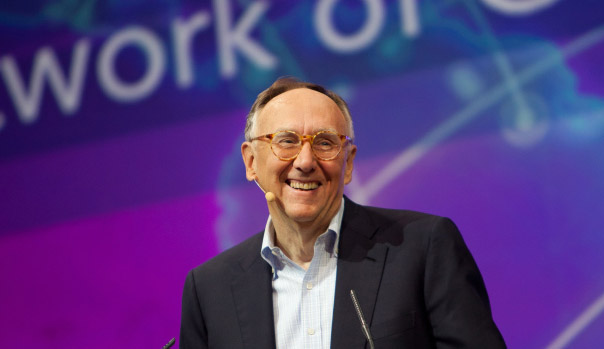 To say that Jack Dangermond is the Steve Jobs of the geographic information systems (GIS) industry would be a bit unfair. After all, when was there ever a time when Apple commanded 43% market share in its domain?

Jack Dangermond is an innovator par excellence, the Godfather of spatial analytics, the founder of Esri – the world’s biggest GIS software company. Jack Dangermond is the reason why the sprawling San Diego Convention Center has been buzzing like a beehive since Monday morning; the reason why more than 17,000 geo-geeks have travelled from over 130 countries to assemble at one place; the reason why city Mayor Kevin Falconer felt compelled to declare July 10 as the ‘Esri User Conference Day’.

The annual Esri User Conference, the Mecca for GIS professionals, is in its 38th year now, and Jack in his 71st. As the conference gets bigger with each passing year, its creator also shows no signs of slowing down. His eyes still twinkle with the curiosity of a teenager; his infectious energy palpable. The man commands respect without even speaking a word.

But when he does speak, you hang on to each phrase like a memory. His hands do as much talking as his lips – did we mention the electric energy already? “The purpose of this meeting is to be together, to grow together. Learn from each other. Share what we’re doing. To become friends. Have a little fun from time to time. And the theme: The Science of Where…” The loyal congregation listens with rapt attention. “Your backgrounds are rich. You come from almost every field of human endeavor. You are special people in my opinion. You hold the reigns of a better future.”

A better future is exactly what Jack envisions with the Science of Where – the science of geography and the technology of GIS – a science has become even more important in a world plagued by population explosion, climate change, and social conflict.

Jack realizes that to address these issues, we first need to understand them better. “Our world is undergoing a massive digital transformation. We are automating everything and measuring everything that moves and changes, and are wiring it together in a fabric across the planet. The Science of Where is a fundamental digital language about understanding. GIS provides us a language and framework to organize maps and data to visualize and analyze shapes and patterns. We can make decisions and take those into action.”

For Jack, GIS is a system of engagement. It is a system of insight. It approaches problem-solving in a holistic way because it integrates people and processes. “Using the Power of Where we are integrating everything,” he says. And advances in technology like distributed computing and deep learning will only expand our ability to apply GIS everywhere. “Web GIS is the modern GIS architecture. It’s helping you do your work better. It’s leveraging web services to integrate teams with the shared knowledge to improve collaboration. It brings all types of data together: imagery, maps, real-time data, 3D…”

Jack believes that the complexity of our cities is being modeled by the Internet of Things, with real-time information applied to do space-time analysis in meaningful ways. “We are extending the reach and bringing the power of maps to everyone, across organizations and beyond,” he stresses.

This, Jack avers, is being done through smart mapping – using computation and analysis to automate the creation of maps. “Web GIS is revolutionizing how we plan and design, integrating science into the design process. We can do interactive designs, and look at different scenarios, to collaborate on good designs.”

Collaboration is actually the buzzword at Esri right now. The company is improving geocoding by crafting new tools for CAD integration with Autodesk. It is teaming up with DigitalGlobe to offer the latter’s high-resolution satellite imagery and image analysis on the fly. Jack also reports progress on integration with the Adobe Creative Cloud, so graphic designers can get more productivity out. ArcGIS content is also set to receive Sentinel imagery, apart from the Landsat data.

ArcGIS, Esri’s flagship product, is anyway recognized as a common 3D platform for spatial visualization and analysis, bringing in CAD, BIM, LiDAR and other 3D data and formats. “It is now a complete imagery platform supporting advanced processing, analysis and image management. If you have an image and pan and zoom, it does dynamic processing. It looks at raw imagery coming off a sensor and it gives on-the-fly results. It provides change analysis and classification with NDVI. It works with full-motion video,” Jack beams proudly. “We’ve added major advancements for JavaScript, Runtime, Python, and more.”

The road ahead also looks rich for ArcGIS. Jack promises to provide more and more improvements with releases every six months or so. “We have hundreds of developers focused on what you want them to do and work on. This is what makes us excited.”

And do we must, for a better future.