Where Are People Most Fluent in Emoji and What is Their Native Language? 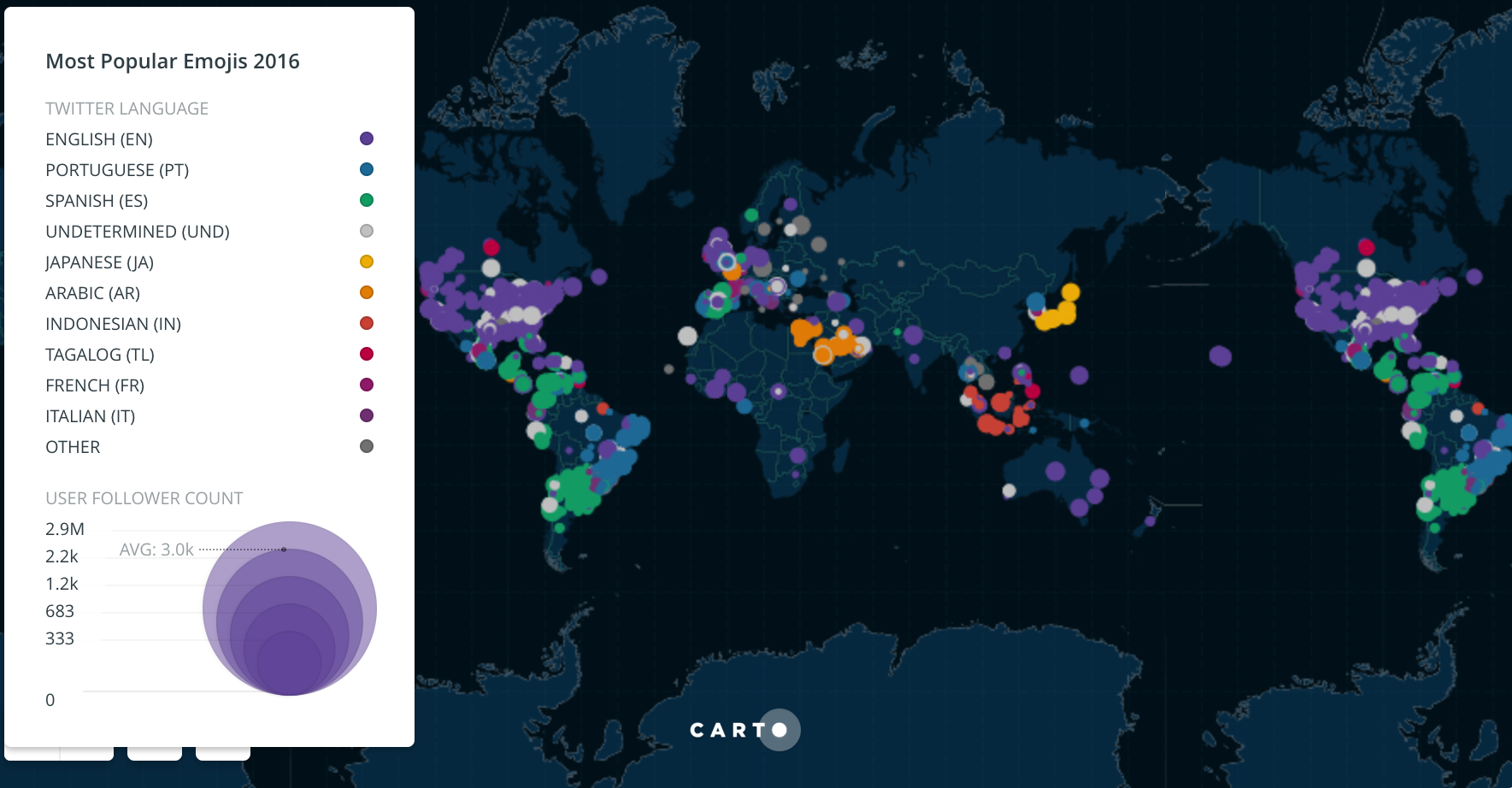 In the 1870s L. L. Zamenhof created Esperanto in attempt to connect the world through a universal language. Little did he know that if he waited a century-and-a-half and used cat videos, Harry Potter-esque moving images, and cute yellow circles with facial expressions, he would have had a much better shot. What a time it is to be alive! Today, young and wired people across the world have become bilingual, communicating in their spoken native tongue and a second language composed of a combination of text, GIFs, and emojis. One day text may fall out of altogether.

A Digital Trends article notes that certain cultures have flown or fallen further down this technological rabbit hole; citing the existence of two dozen or so hyper-connected languages, including English, Mandarin, Spanish, and Japanese. I was curious to see whether these languages would show up on a map using a dataset of tweets containing the world’s most popular emojis from 2016, which were

as well as data from World Emoji Day 2017. In creating the visualization, I drew inspiration from Eric Fisher’s Twitter Language map.

If I didn’t already speak English I would probably have “fomo“ because it is by far the preferred language in the digital sphere, ubiquitous even outside countries where it is the primary language. The fact that English continually updates its vernacular with “funtastic” new words from social media like “clicktivism”, “fitspo”, or, less recently but perhaps more urgently, “hangry”, means that “youths” worldwide must atleast attempt to Instagram or Tweet in English or else drink that “haterade”. Many such English words have begun to permeate other languages; “Selfie” has already become universally understood across the globe and even has an emoji;

After English, the tongues with the most emoji tweets were Portuguese, Spanish, Japanese, Arabic, Indonesian, Tagalog, French, and Italian in descending order. Portuguese has widespread usage throughout Latin America even outside of Brazil and Europe outside of Portugal. Similarly, Spanish is also prevalent in the U.S. and Europe outside Spain. I attribute these more to areas with large Iberian diasporas and less to their global influence because they had limited usage outside these areas except from those traveling there.

Certain cities are known as party cities, but what are the emoji cities of the world? Apparently on December 8th, 2016 around 7pm U.S. EST, Rio de Janeiro, Sao Paulo, Buenos Aires, Porto Alegre, and Los Angeles were the most

places in the world in descending order. I’m still not sure whether this is because these South American cities were further beyond the end of their work day and that entertainers in L.A. are tweeting for their careers all day long, or if these cities really rely more heavily on emojis than others to communicate. Perhaps Latin American culture is truly more emotive in ways that cannot be expressed with text alone.

This last map removes differences in spoken languages from the equation and focuses on the density of the most popular hashtags. In doing so it becomes a map of the most connected world regions, meaning places where people will literally cease to function if they pass through a no wifi zone and momentarily lose their connection to Instagram, Facebook, or Tinder (maybe?). In doing so, it essentially reveals the world’s megalopolises. The BosWash,  Northern and Southern California urban areas, Taiheiyō Belt, London Commuter Belt, southern Brazilian metro areas (Rio de Janeiro, Sao Paulo, & Porto Alegre), and Buenos Aires metro area are particularly pronounced.

July 17th marks World Emoji Day because of course the iOS calendar emoji shows that date. On this historic day, the world released 330,800 #WorkEmojiDay tweets with 71% retweet and 5% reply rate according to Trendsmap. The top ten emojis on this day were slightly different than the most popular emojis of 2016 overall:

For anyone wondering what emojis are most widely-used on Twitter, like right now, you can check out the emojitracker for the stats since July 4th, 2013 updated in real-time.

So who had a lot of feelings about feelings as conveyed through small shapes and just needed to vocalize or emojize them on this special day? It turns out that India with its Bollywood movies filled with emotional roller coasters, musical and dancing numbers, and bright colors was particularly expressive. India had the highest proportion of its Twitter conversation relating to #WorldEmojiDay (60%), followed by Kenya (46%), the U.K. (39%), Canada (30%), South Africa (28%), Paraguay (20%), United States (18%), Germany (17%), Italy (17%), and Ireland (17%).

Emojis may be the universal language but people tweeted about emojis overwhelmingly in English (87%) as well as Spanish (6%), Hindi (2%), and French (2%). This is to be expected based on what we already know about social media and since the official #worldEmojiDay hashtag is in English. Also India, the country most invested in the conversation speaks English as an official language in addition to Hindi and apparently emoji.

(Where in the World is Emoji Most Widely Spoken?)

All in all, it looks like the world’s megalopolises, especially in the U.S., U.K., South America, and Japan, use the world’s most popular emojis on any given day, but India, Western Europe, and the U.S. like to tell you about their thoughts via emojis on the dedicated digital day. Maybe Japan is always connected to social media and South America’s telenovelas don’t need an excuse to express themselves while Bollywood likes big events. Who knows?

What is clear is that our overall emoji vocabulary and usage are growing with technology and globalization to the point that the world now has dedicated professionals whose job is to translate emojis between platforms, languages, and cultures. This task may seem trivial but given the euphemistic , which is only used as fruit by 7% of people, and the  and which can be offensive gestures in the Middle East and Latin America, respectively, this job is no joke.

(Do you speak emoji?)

Say thanks for this article (0)
Misha Chakrabarti
6 posts
Want to be an author?
The community is supported by 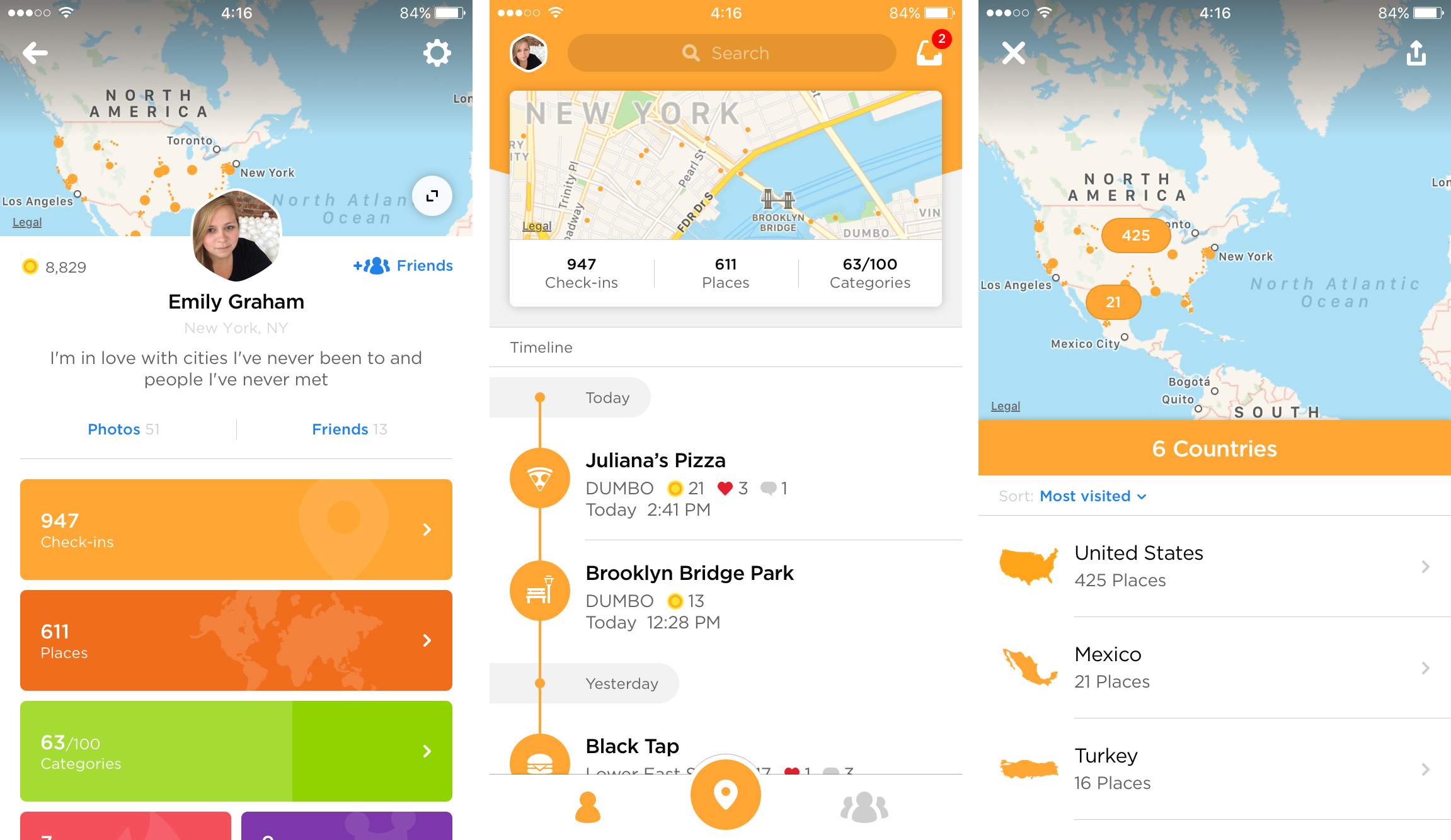 Our smartphones are practically flooded with social media apps these days, several of which we haven’t even opened in weeks. But if there’s one thing that people still love to do on social media is check-in to a place they are visiting. No, it’s not about broadcasting your whereabouts to the world anymore; it’s about creating a memory, marking a moment in time.

If you’re anything like me, you probably look forward to what Facebook has in store for you ‘On this day’. The results are sometimes surprising, mostly wistful, and almost always guaranteed to send you on a trip down the memory lane. This “lifelogging” is exactly what the new and updated Swarm app is all about.

When Foursquare split its app in two in 2014, the main Foursquare app kept its focus on location discovery while the check-in feature went to Swarm. At that point, it was all about the gamification of the experience and competing with friends. But now, Swarm’s attention is completely on you, the user. The aim is to smartly sort all the places you’ve ever visited in a searchable database and show them to you with value-additions.

What are these value-additions? Well, they are quite fun actually. Swarm will analyze the data to give you insights like, “You haven’t been here in 2 years!” or, “This is your 3rd taco place this week!”, or “You’ve been to the gym at least 1x week for 7 months in a row!”

According to Dennis Crowley, the co-founder and Executive Chairman of Foursquare, “Swarm was designed to help you become aware of your routines, and then nudge you to do more — encouraging you to try a new place or explore a different neighborhood. This idea of ‘software that encourages you to do/see/experience things you normally wouldn’t’ is something that has been core to us since our early days, and I’m excited to see it live on and thriving in Swarm.”

So if you used to be an old Foursquare/Swarm user, check out the new app. If for nothing else, then for the new sleek UI and the brilliant map that will show you all the places you have ever checked-in to. Who knows, what you might discover!