According to Waze, its users drove 60% fewer miles in the March 1 – April 10 period as compared to February. 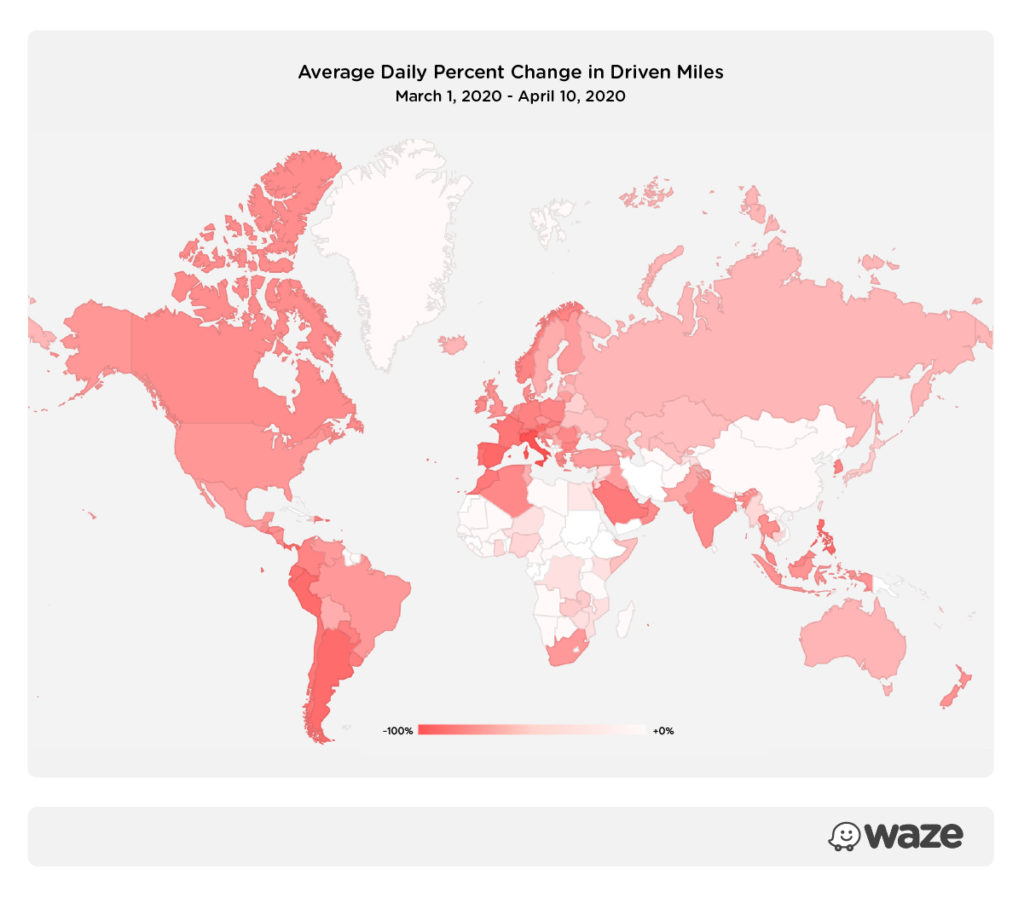 A closer, country-level look confirms that the earliest changes in traffic patterns were reflected by the nations where the COVID-19 outbreak occurred first, with other countries joining the group soon after. 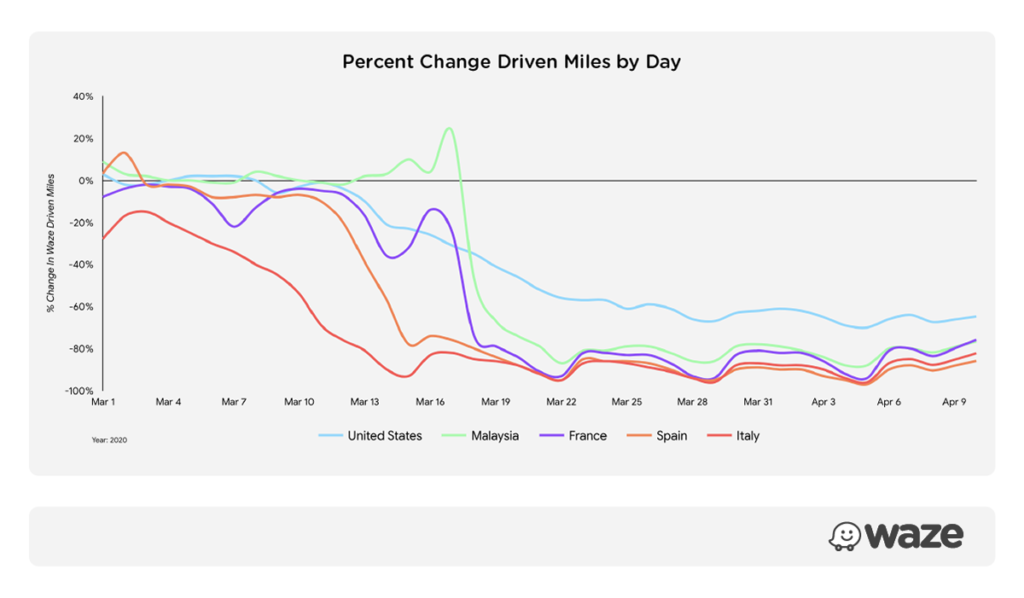 Since Italy was one of the first nations to witness a freighting surge in COVID-19 cases, driving there decreased by more than 90% in the March-beginning – mid-April period. 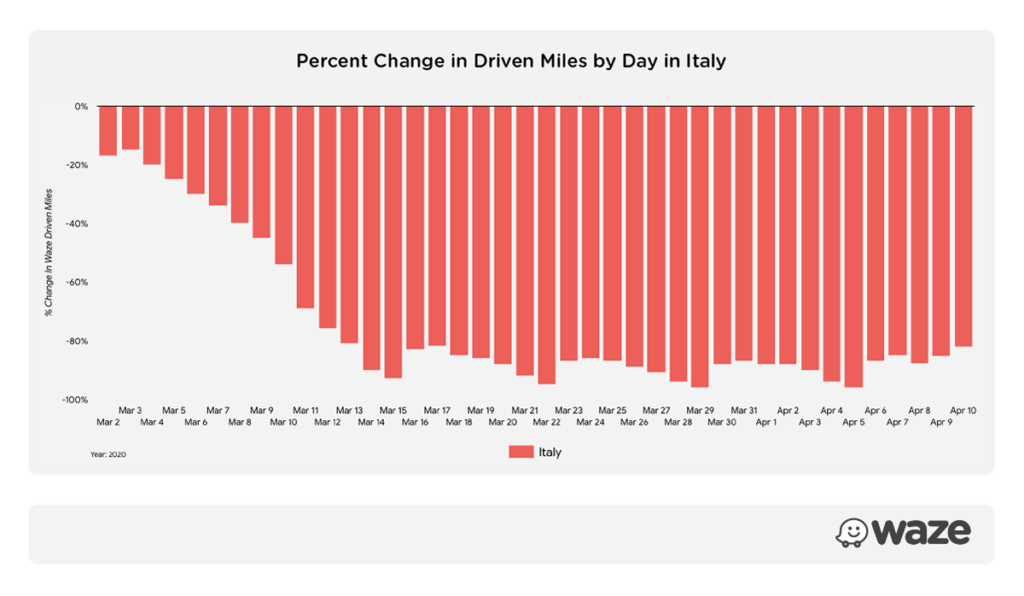 But analyzing driving patterns is not the only thing that has kept the team at Waze busy during the last few weeks. With support from a 30k-strong global community of volunteer map editors and local government officials, the Waze Crisis Response team has been updating road closures and red zones in maps of 58 countries (and counting). By assisting with region-specific relief efforts, Waze has been able to ensure that drivers of essential commodities reach their destinations safely.

Further, in the United States, the Waze app now shows more than 30,000 emergency food distribution locations. For this, Waze has partnered with nonprofits WhyHunger and No Kid Hungry.

Waze has also released a new feature that allows users to identify the stores that are providing alternate pickup options for food and other essential goods. 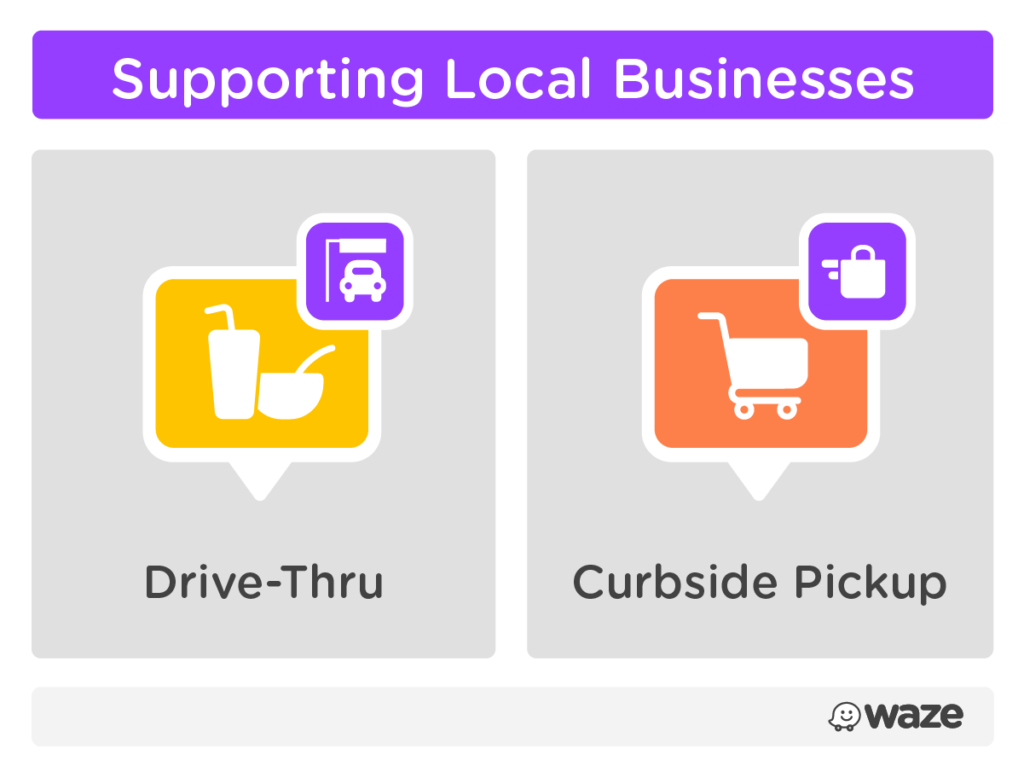 In compliance with social distancing norms, these unique badges clearly show which local businesses are offering drive-thru or curbside pickup services. Users can easily search, filter, and navigate to these locations to get food and other grocery supplies with minimal contact.

What’s the impact of covid19 on Barcelona retail?

At Eixos Economic Observatory we’ve used our fieldwork data to shed light on the current covid19 lockdown retail scenario and what has yet to come as a result of the closure of business. We do not do this to be alarmists, but because we believe that it is possible to make more accurate forecasts and make better decisions with data-driven scenarios.

In the coming days, weeks and months we will be publishing a series of articles on Geoawesomeness.com that analyze the impact of confinement and social distancing measures on retail and economic activities at the street level of cities.

How does confinement and social distancing derived from covid19 affect retail? How will it affect in the immediate future, within three months? What will be the retail health scenario of our cities in a year? What steps should be taken to revive the likely drop in business activity?

These and others will be questions that we will try to answer, using data and retail composition and retail health indicators.

COVID19 CONFINEMENT AND CLOSURES. BEFORE, DURING AND AFTER.

How do we measure the impact of covid19 lockdown on retail?

We will do this by comparing three scenarios with each other: the pre-covid19-closure scenario, the scenario for confinement itself (both real and quantifiable scenarios), and a third hypothetical scenario, three months after the end of confinement.

In order to create the hypothetical scenario, we suppose that certain commercial activities, due to some of their specific characteristics, will have many problems to resume and reopen. In one way or another, all commercial activities will suffer through financial stress. However, in many cases, businesses will have to permanently close and these closures will be the most damaging.

As modeling retail closures can become a very complex calculation, which would require data on which we cannot have sufficient detail (such as debt status, actual operating costs, etc.), we simplify the model by assuming what would happen if certain categories of economic activity simply could not reopen after the quarantine.

We also establish the margins of different commercial scenarios that would lead to decay in activity. The key here is predicting when the Retail Occupancy Index (ROI) (the percentage of active storefronts with respect to the total number of available storefronts in a particular geographical area) might reach the threshold of desertification (ROI < 80) and the even more critical threshold of severe desertification (ROI < 70).

What activities are most affected by covid19 lockdown?

One group of stores that might be most affected by covid19 lockdown are stores with goods in stock that may be damaged during the quarantine period.

Another group of stores that will likely be most affected by covid19 lockdown are those that depend on tourism, especially those in the most touristy areas of the city.

Only the essential activities are open:

All activities are open, but personal equipment stores.

After the covid19 quarantine all activities are open but personal equipment stores and bars and restaurants.

How many stores may close before it turns really ugly?

In order to keep retail occupancy at a healthy level, the ROI should be 80 or higher. However, it is especially important to at least be above an ROI of 70, which is considered the critical point for severe desertification.

In order to detect the neighborhoods most affected by the massive closure of stores, as a direct consequence of covid19 lockdown, and the difficulties in re-opening, we have established a “minimum leap” index that is the variation between the current scenario and the medium impact scenario (m), where all activities are open except personal equipment stores.

The various scenarios we have defined are summarized in two.

In this scenario, retail vacancy only significantly affects the personal equipment stores (clothes, shoes, jewelry, etc.); other activities are also affected, but less so. This is not a great scenario, as it involves the closure of between 10% and 30% of the economic activities on the city storefront. It destroys a retail model based on independent shop-owners, which are defined as entrepreneurs who own between one and four outlets.

The post-covid19 most damaging scenario, the Doomsday Scenario, is also plausible:

In this scenario, the retail vacancy seriously affects both personal equipment stores, as well as the restaurant and hotel industry. Given the importance of tourism in Barcelona, and the fact that tourism will not return to the pre-covid19 crisis levels for up to a year, this is a very realistic scenario.

But this scenario is bad not only for tourism. The norms of social distancing, which affect the social life that fills bars, restaurants and nightclubs, are here to stay. These norms can be unilaterally applied by the state at any time they see they fit, be it for health reasons or other reasons, and this possibility has to be considered.

This scenario can cause 30% to 60% of the retail activities to close.

Can disaster be avoided? What to do?

Understanding that a catastrophic scenario is one that causes irreversible changes to a previous scenario, and taking into account the data we present, we find that such a scenario is very possible. Everything indicates that there will be big changes, most likely irreversible.

Ensuring the medium-impact scenario (m) outcome will largely depend on how the various agents, who have the power to transform the commercial landscape, end up acting. These agents are primarily public administrations at various levels of government and decision-making and they are key to the outcome. If these public administrations drag their feet and act late, the worst case scenario outlined in this article, or worse, is very possible.

If these public administrations drag their feet and act late, the worst case scenario outlined in this article, or worse, is very possible.

Avoiding that worst-case scenario will require multi-scale, small business support so that the heretofore very successful Mediterranean city model, as we know it, does not collapse. To begin with, the magnitude of the tragedy will need to be accurately calibrated so that the recovery effort can produce as good a post-quarantine scenario as possible.

The concentration of retail activities on the main, central and main commercial-adjacent streets seems may be inevitable, in order to prevent desertification from progressing without stopping.

If the authorities do not act decisively, we also risk losing a lot of independent businesses that, until now, were solvent and met fundamental needs in our cities. Not only that. It will take time for future businesses to replace the shops that close during and shortly after this emergency. This is because the fear of the desertification scenario will discourage new shops from  opening.

Therefore, it is necessary to take decisive action, necessarily led by the public administrations, to restore retail trade to what it has been until right before this crisis.

Retail makes a city. Without urban retail, the Mediterranean city, as we know it, will be something else.