The First Fleet of 1,485 settlers first arrived in New South Wales on January 26, 1788 – a date which is now celebrated annually as Australia Day. Since then, Sydney has developed into one of the world’s largest, most cosmopolitan cities, with a population of over 5 million and a unique mix of Aboriginal, British, Asian, and European cultural influences.

To get a better understanding of how Sydney became the modern metropolis it is today, Budget Direct analyzed dozens of maps of Sydney from the National Library of Australia and other sources from the years 1770-2020. They then designed their own maps combining information and features from the historical maps to create the below animation that depicts the major infrastructural, architectural, and demographic developments of the city:

Some important historical maps whose modernized avatar can be seen in the above video include: 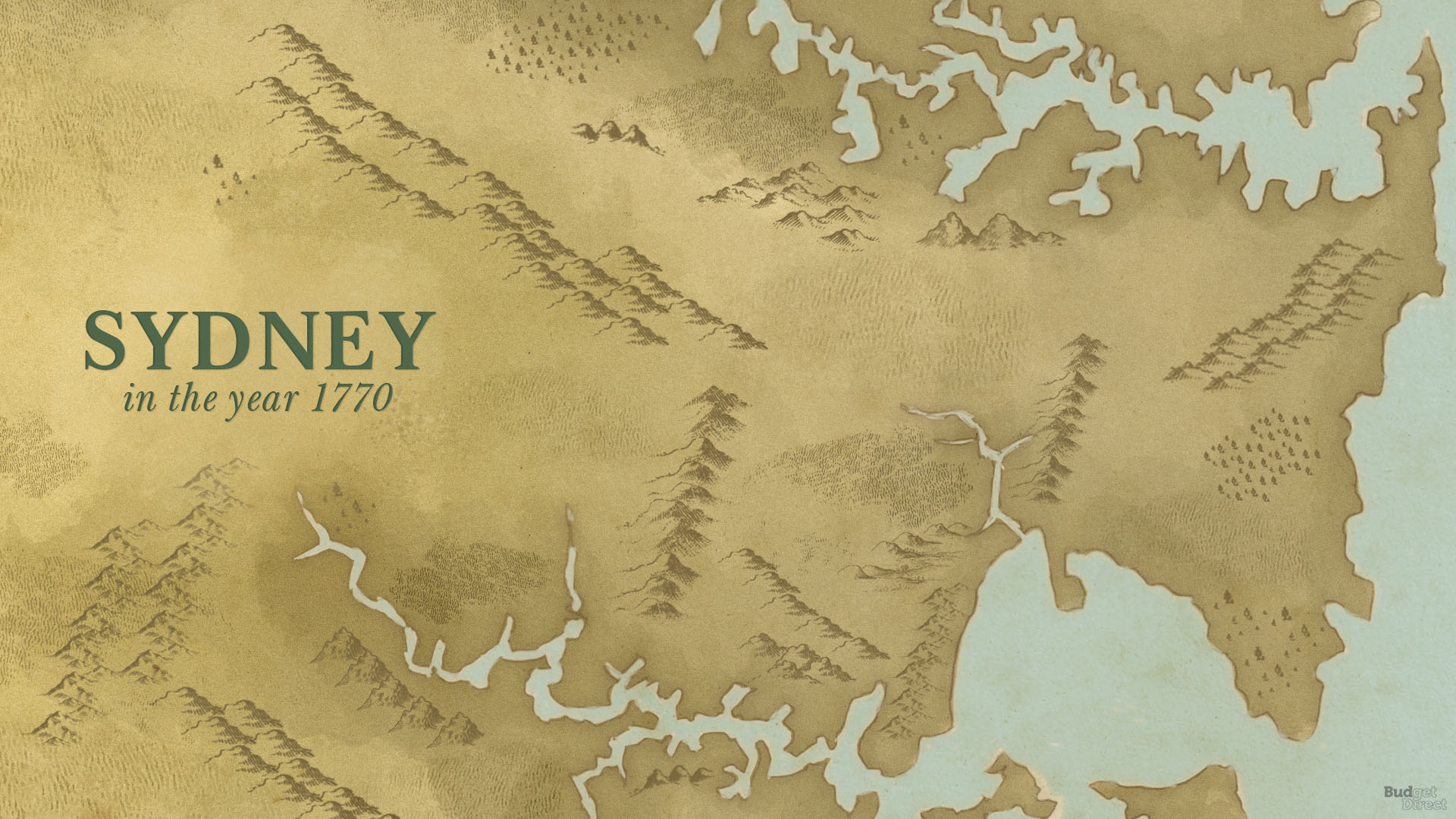 Drawn by Richard Pickersgill, as part of the HM Bark Endeavour expedition led by Lieutenant James Cook, this map got its name due to the presence of stingrays, until the discovery of new plants in the region prompted Cook to call it Botany Bay. 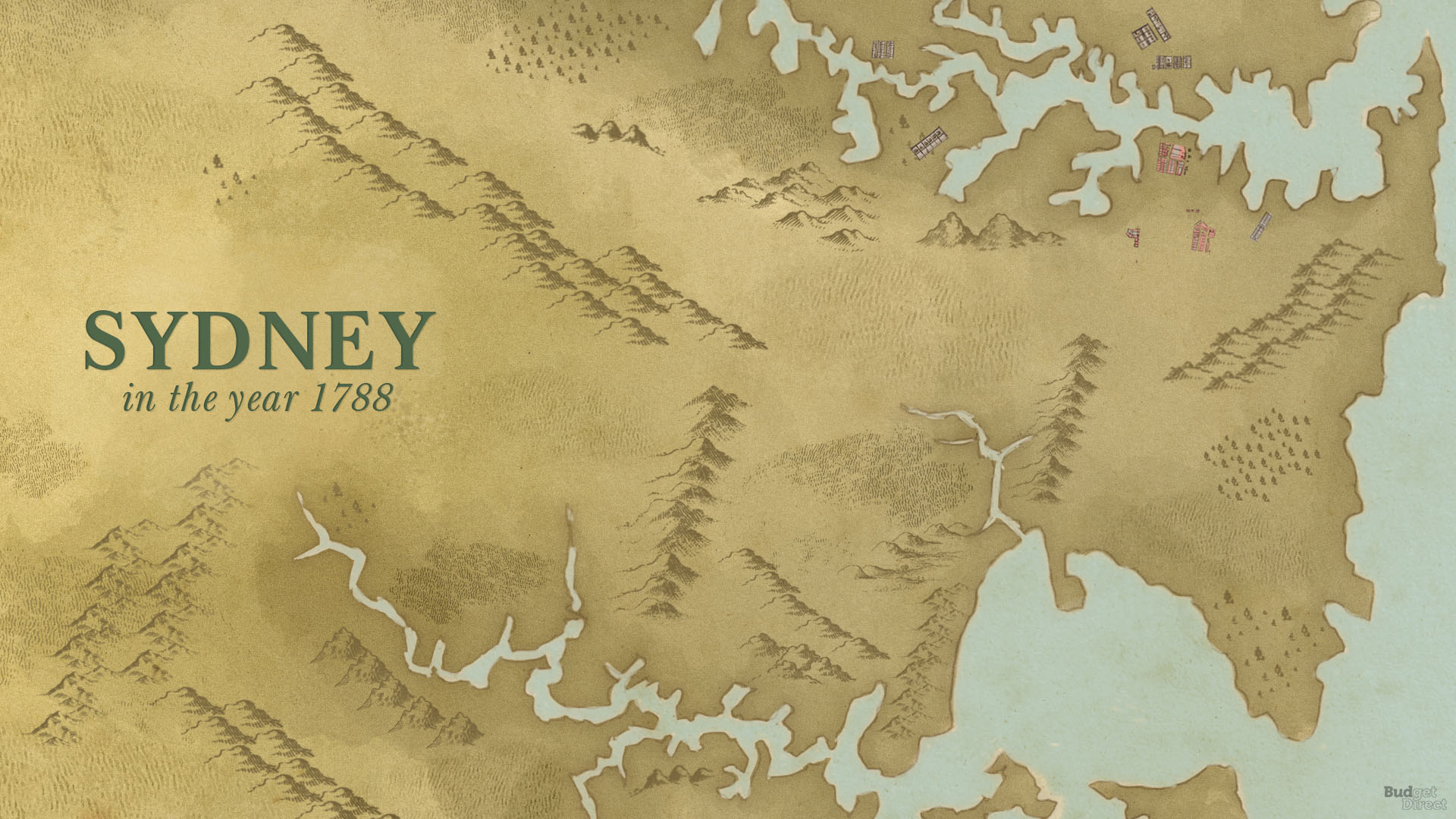 This was the first known etching of the first settlement in Sydney – a penal colony at Sydney Cove. The full title of the map is “Sketch & description of the settlement at Sydney Cove Port Jackson in the County of Cumberland taken by a transported convict on the 16th of April, 1788, which was not quite 3 months after Commodore Phillips’s landing there.”

A topographical plan of the settlements of New South Wales – 1799 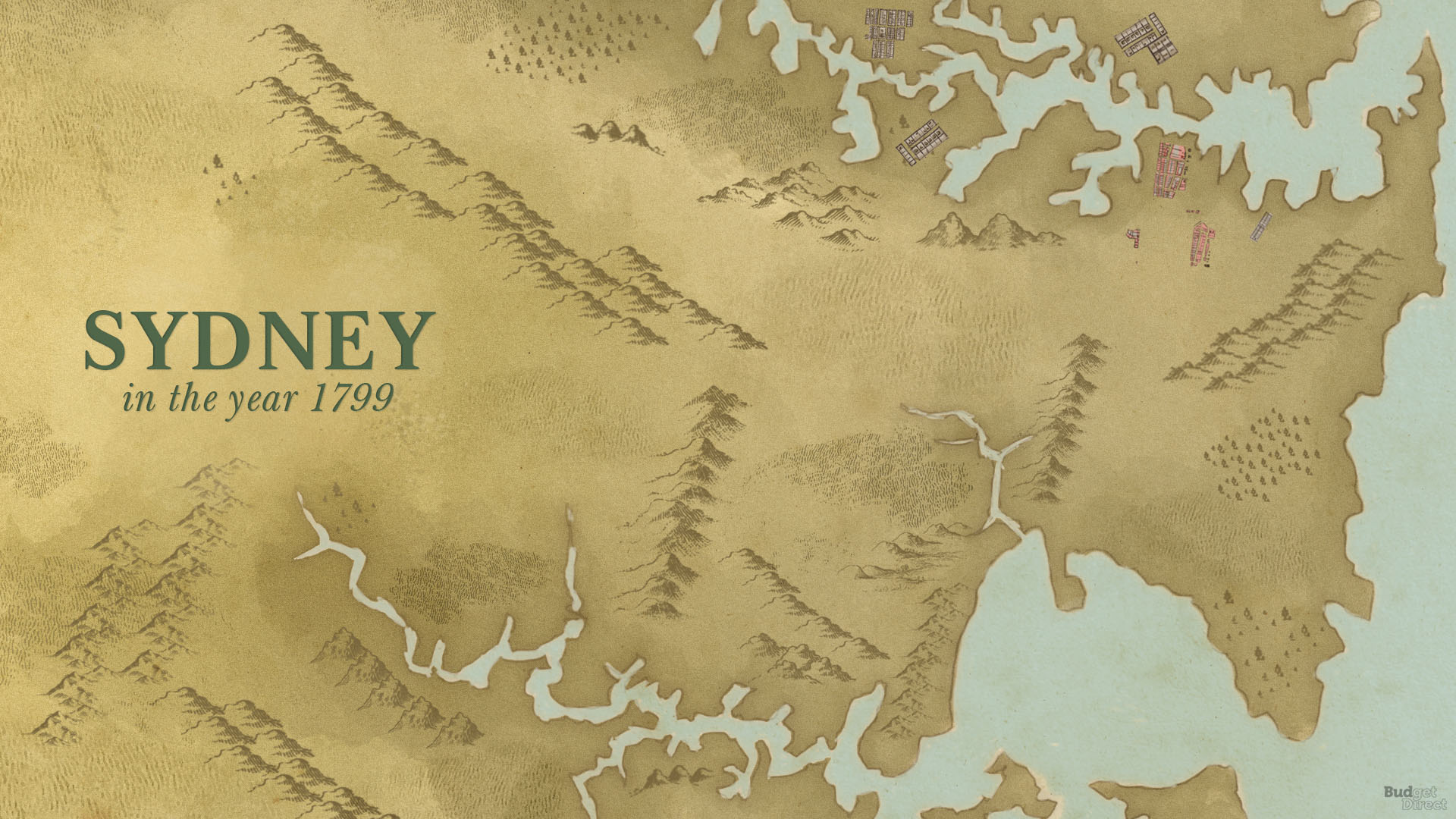 This map was made to show the progress of exploration since 1788, completed by professional cartographers and explorers Charles Grimes and Matthew Flinders. Additions to the map were made in 1815. 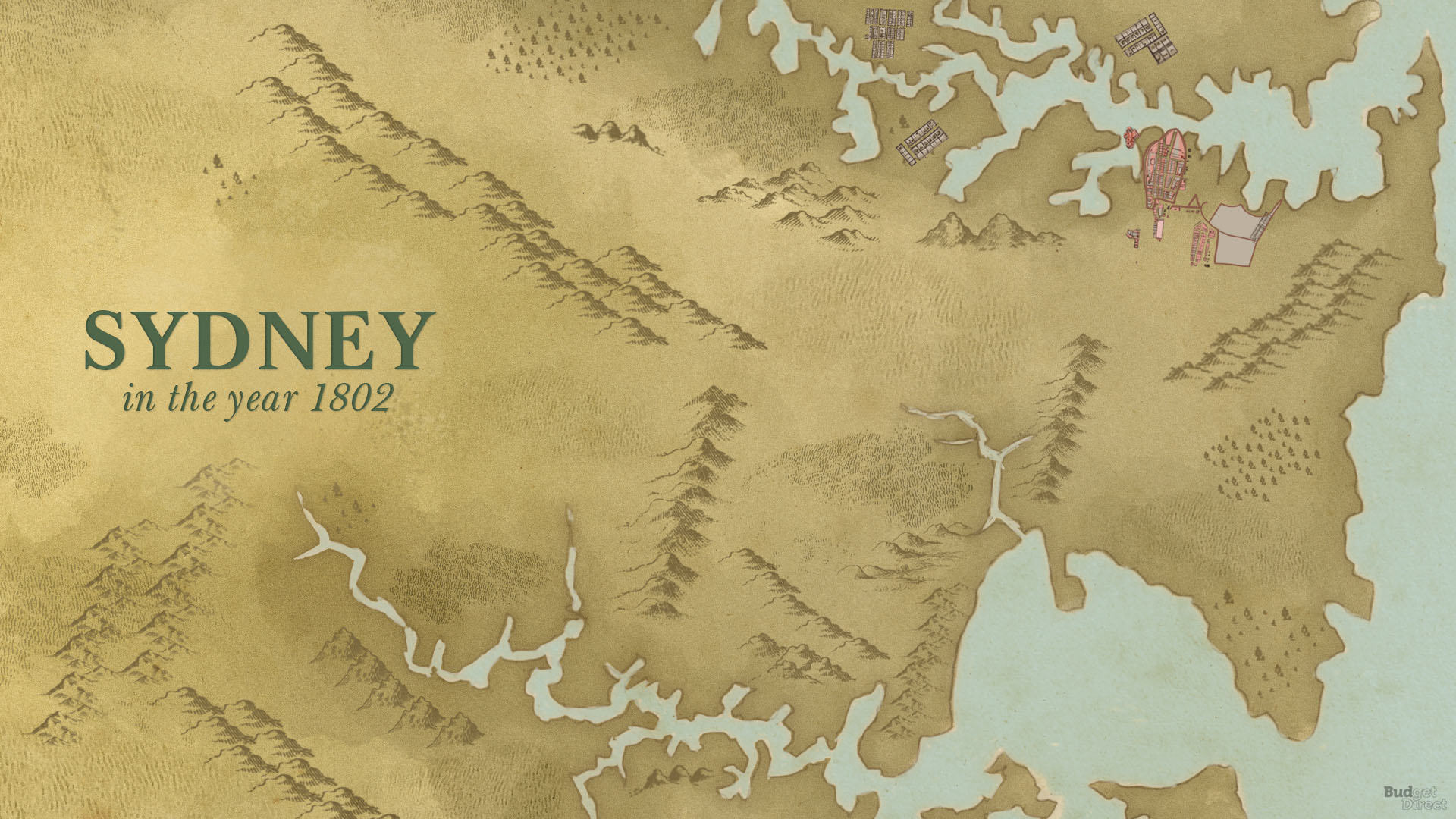 This map was drawn during the Voyage de découvertes aux terres Australes, a scientific expedition commissioned by the Institut de France whose purpose was to observe the geography and natural history of New Holland. The expedition was approved by Napoléon Bonaparte, as First Consul, and Nicholas Baudin was chosen as commander. In April 1802, Baudin’s ship the Geographe had an encounter with the Investigator, a British ship captained by Matthew Flinders, who was also on an expedition to chart New South Wales. 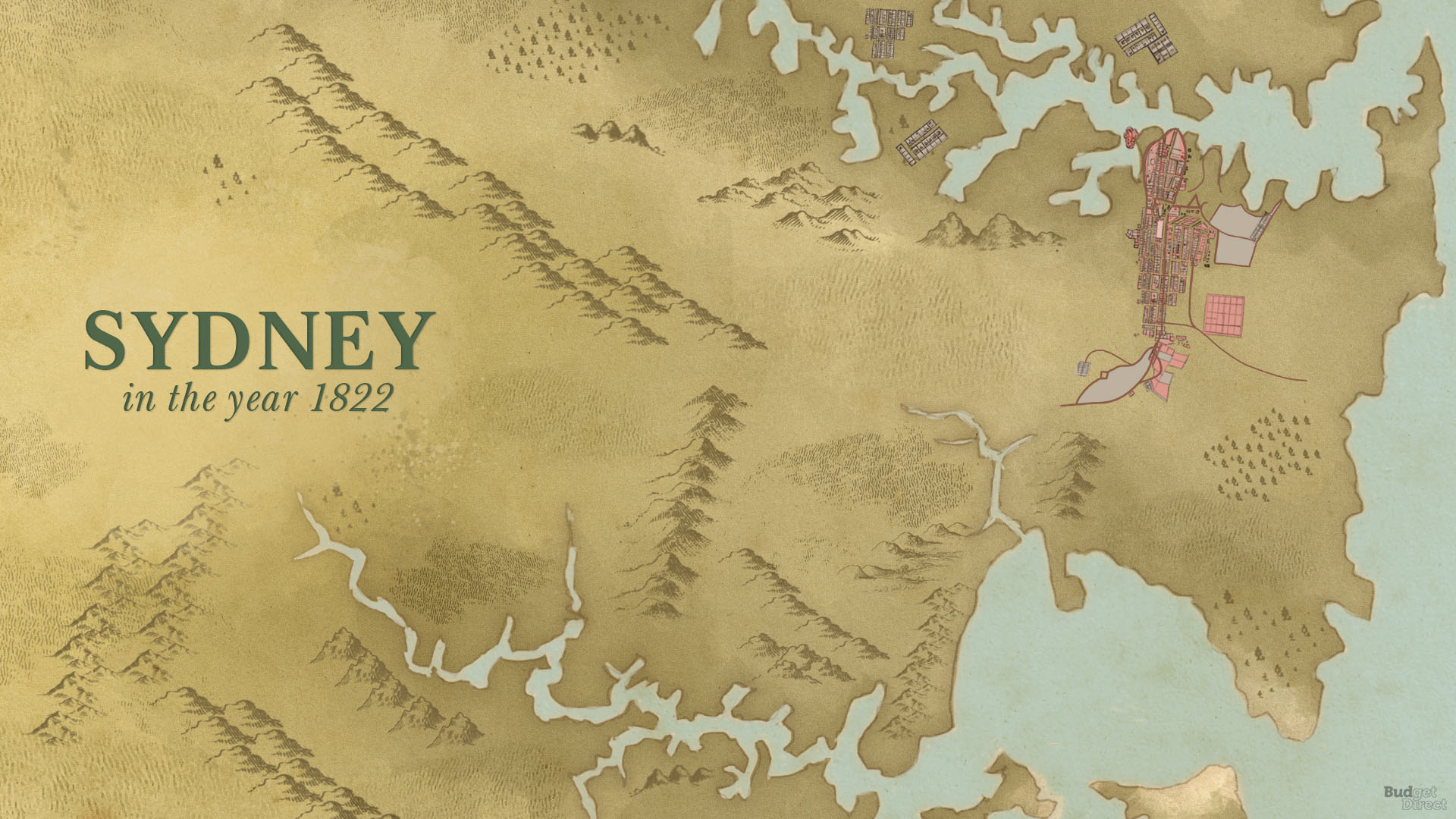 This map has an unknown author and place of publication. It was likely commissioned by then Governor Thomas Brisbane. It is currently held in the National Library of Australia. 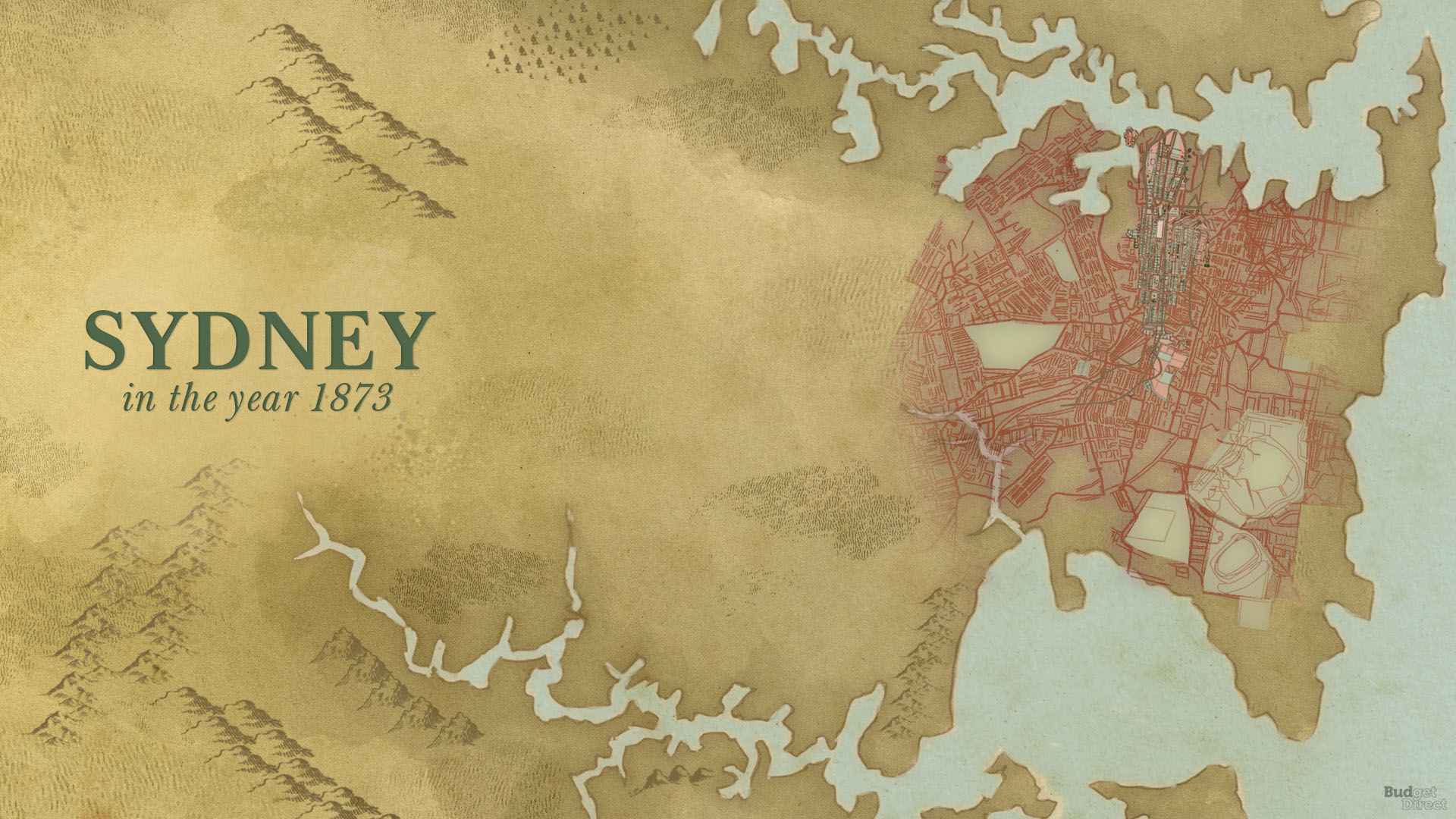 This map was published as a supplement to Sydney Mail magazine to show the growth and development of Sydney from 1802 to 1873. The 1802 base layer used in the map is believed to be from an engraving published in Francois Peron’s 1775-1810 Voyage de decouvertes aux terres australes. This map is currently in the National Library of Australia. 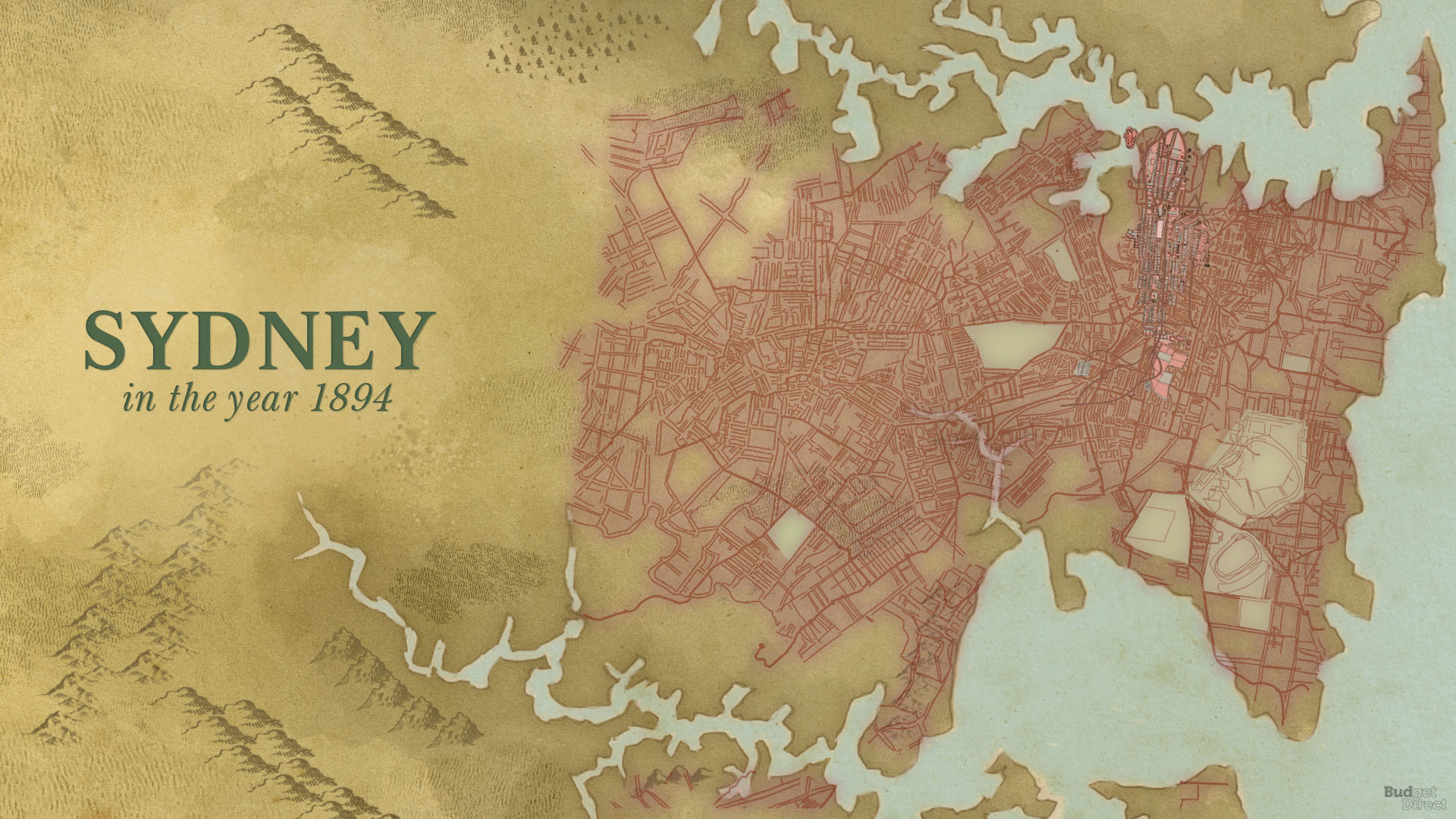 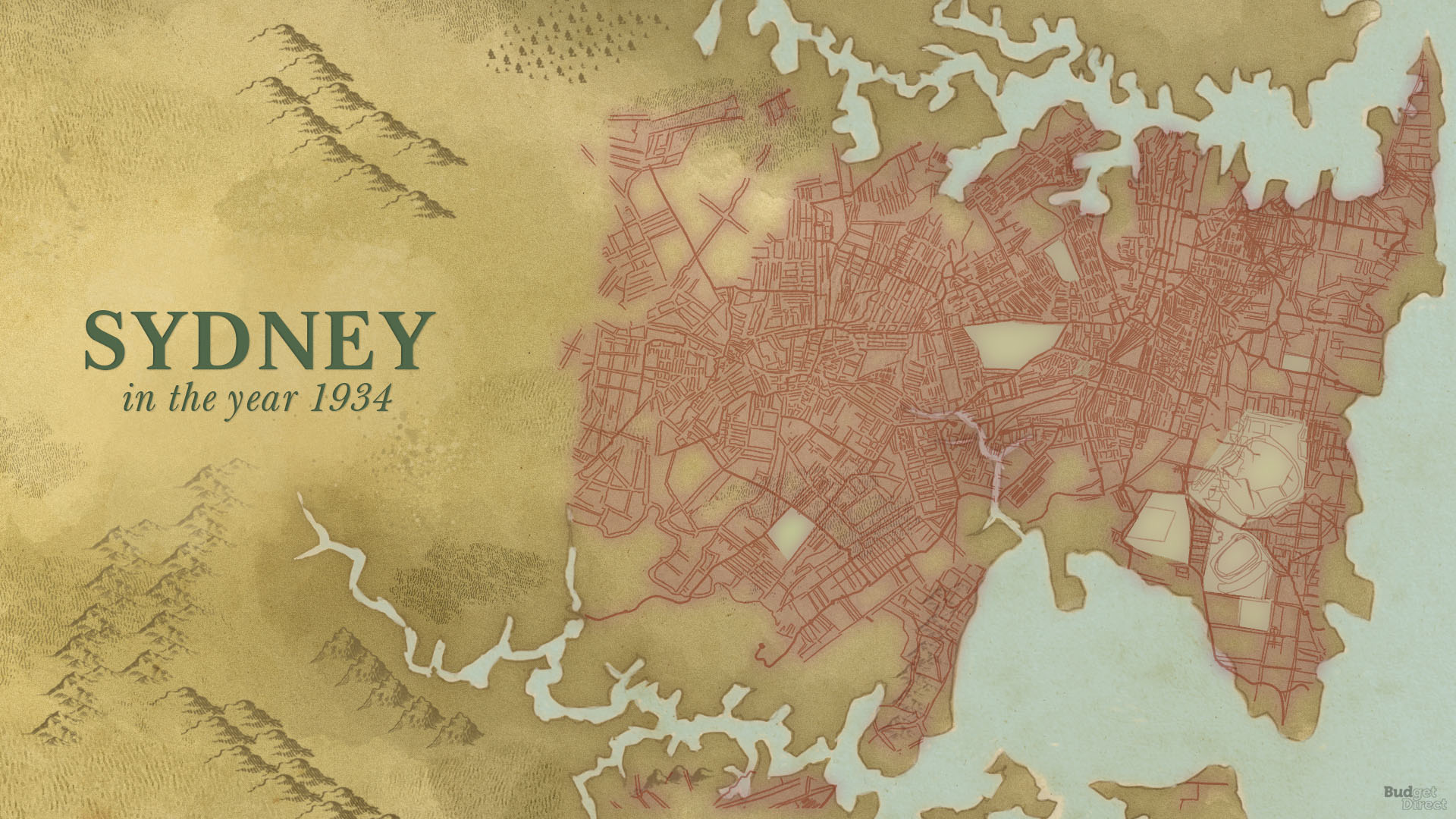 This is the first edition of Gregory’s Street Directory, which produced street maps of Sydney throughout the 20th century. Today Universal Publishers publishes UBD-Gregory’s street directories of Australia. 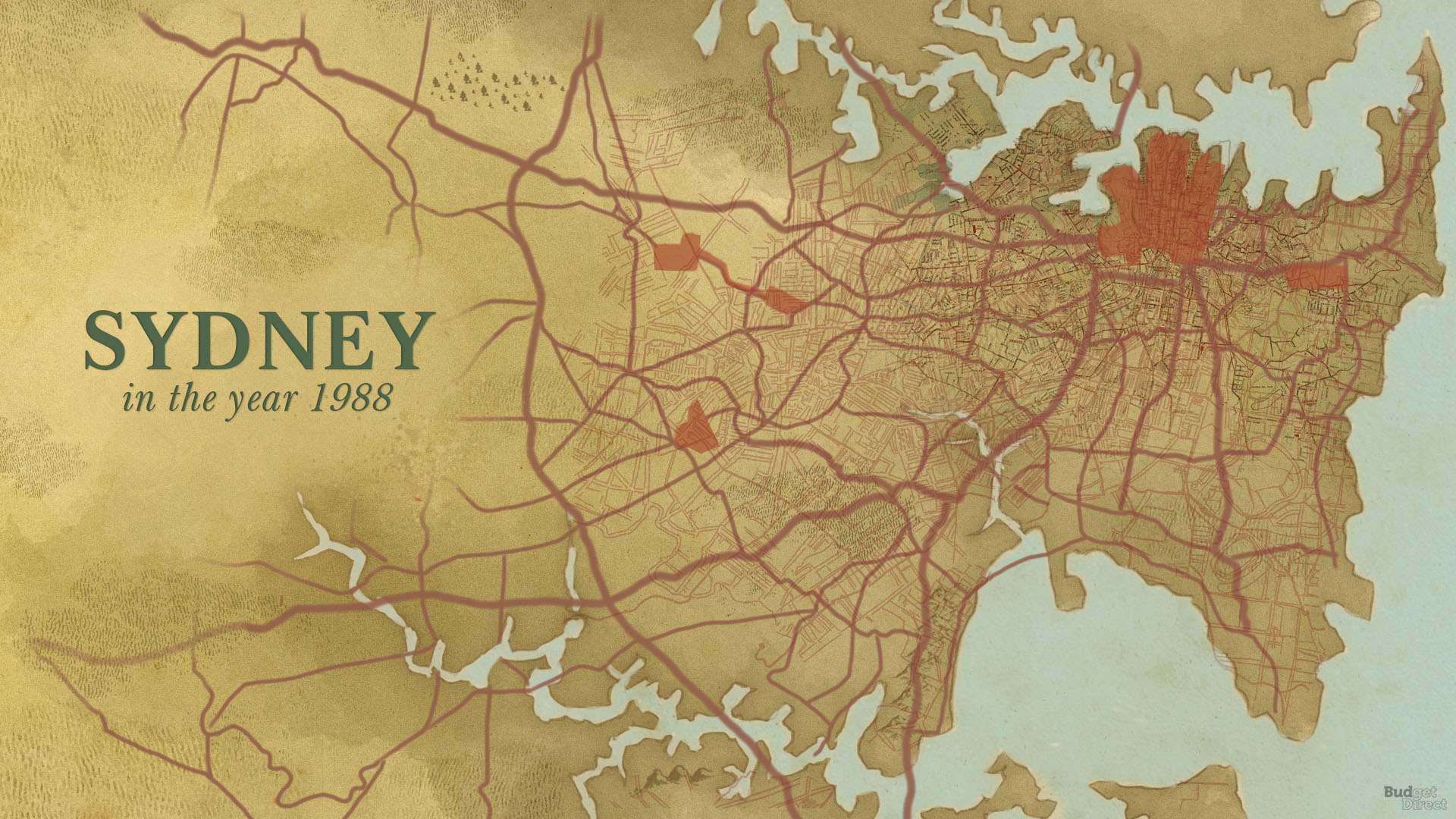 This map was commissioned during the 200th anniversary of the city of Sydney, and was meant to replace the 1968 Sydney Region Outline Plan. It was a departure from earlier planning visions, as it prioritized urban density, as opposed to the use of green belts of earlier regional plans. It currently belongs to the Government of New South Wales. 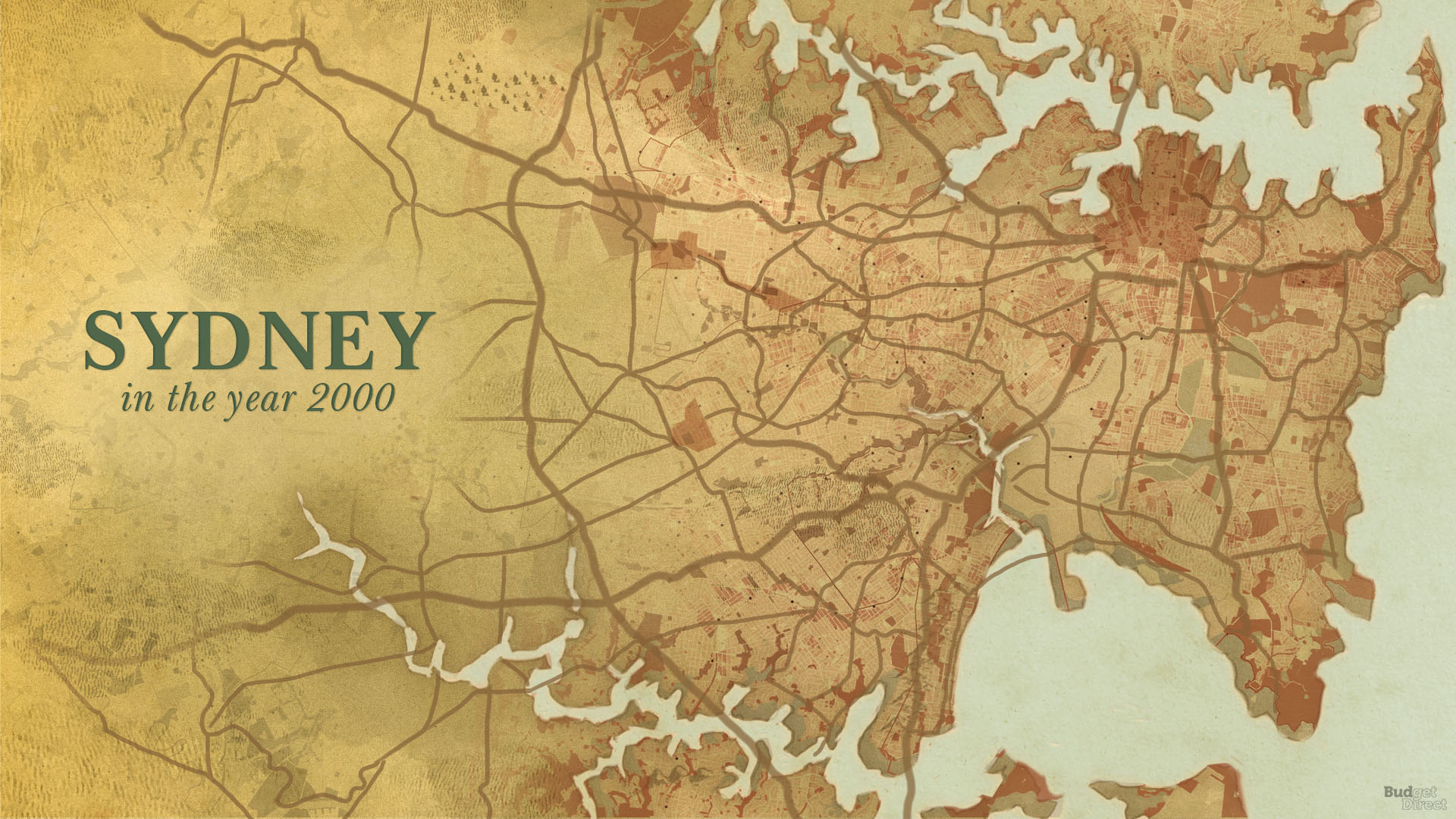 This map was created by the Transport Management Centre for internal use during the 2000 Olympic Games to help with traffic management. It is one of 16 Olympic day maps produced during the games. It is featured in the Esri Map Book Volume 16 under Transportation, titled “Olympic Mapping”. 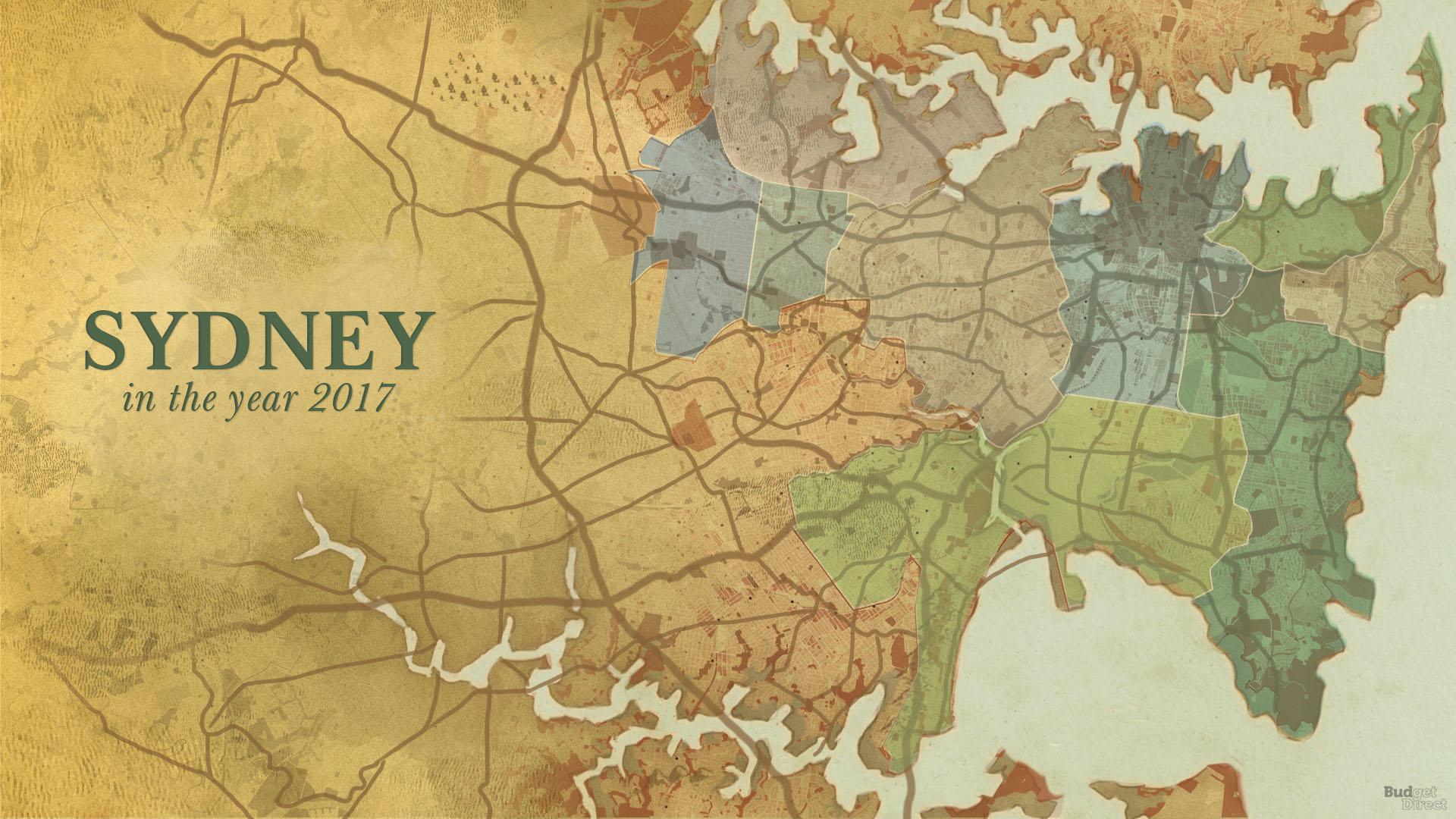 This map was made by Tyrell Studio in association with the Office of the New South Wales Government Architect, prepared for the Department of Planning and Environment. It was made to help aid in the creation of District Plans for Sydney and specifically focuses on the city’s open green spaces. The Food and Agriculture Organization of the United Nations (FAO) has launched a new geospatial portal that would help to build more resilient food systems post COVID-19. Called Hand-in-Hand, the geospatial platform contains over 1 million geospatial layers and thousands of statistics with 4,000 metadata records for more than 10 food and agriculture-related domains.

The data has been sourced not only from FAO, but also the agency’s partners and other public data providers across the UN, NGOs, private sector, and space agencies. The portal also contains FAOSTAT data on food and agriculture for over 245 countries and territories from 1961 to the most recent years.

Anyone can access this platform to analyze trends and create interactive maps that would foster data-driven and evidence-backed decision-making in food and agriculture. Use cases could include:

Stressing that the portal will help to identify real-time gaps and opportunities in agriculture, FAO Director-General, QU Dongyu, says, “Geospatial technologies and agricultural data represent an opportunity to find new ways of reducing hunger and poverty through more accessible and integrated data-driven solutions.”

FAO plans to add new datasets and country- and domain-specific case studies also to the platform in the near future. This, FAO hopes, would help to encourage innovation, finance and investment, and institutional reform in food and agriculture through tailored policy intervention.

As FAO’s Chief Economist, Maximo Torero, sums up, “The geospatial platform will allow us to design more targeted agricultural interventions and investment plans through a territorial approach – an approach that fosters equality, inclusion and sustainable food and nutrition security.”