Watch how the human population skyrocketed over the past 200.000 years

It took 200,000 years for our human population to reach 1 billion—and only 200 years to reach 7 billion. Check out the American Museum of Natural History’s animation above which chronicles human population over time. Awesome and inspiring.

Check out other awesome maps about the human population on Earth.

This startup brings the power of GPU to mapping

By now you must have heard about the power of GPU. Previously associated mainly with gaming, Graphics Processing Unit started to play a considerable role in deep learning and starts to be more and more critical for general-purpose computing. One of the major benefits of GPUs is that it applies the concept of parallelism. In simple terms, CPU consists of a few cores optimized for sequential processing while a GPU has a massively parallel architecture composed of the thousands of smaller cores designed for handling multiple tasks simultaneously.

The technology started to play an important role also in the area of databases. GPU-optimized Big Data environments can query and visualize information more than 100x faster than other systems and this applies also to geospatial data.

MapD is a San Francisco based startup that created GPU-powered big data analytics platform focused on location-based information. Guys at MapD were one of the first startups leveraging the massively parallel computing capabilities of GPUs to execute SQL queries over multibillion row datasets with millisecond response times and render the results using the native visualization capabilities of GPUs.

The story of MapD started a few years ago when CEO Todd Mostak was waiting hours and sometimes days for a single query to process patterns in hundreds of millions of tweets for his Harvard thesis on the Arab Spring. Frustrated that he couldn’t access a cluster of computers to perform his computations, he created his solution by pairing off-the-shelf video game GPU cards with a new design for parallel databases. The effects were so amazing that Todd decided to pursue this technology as a researcher and funded MapD back in 2013. 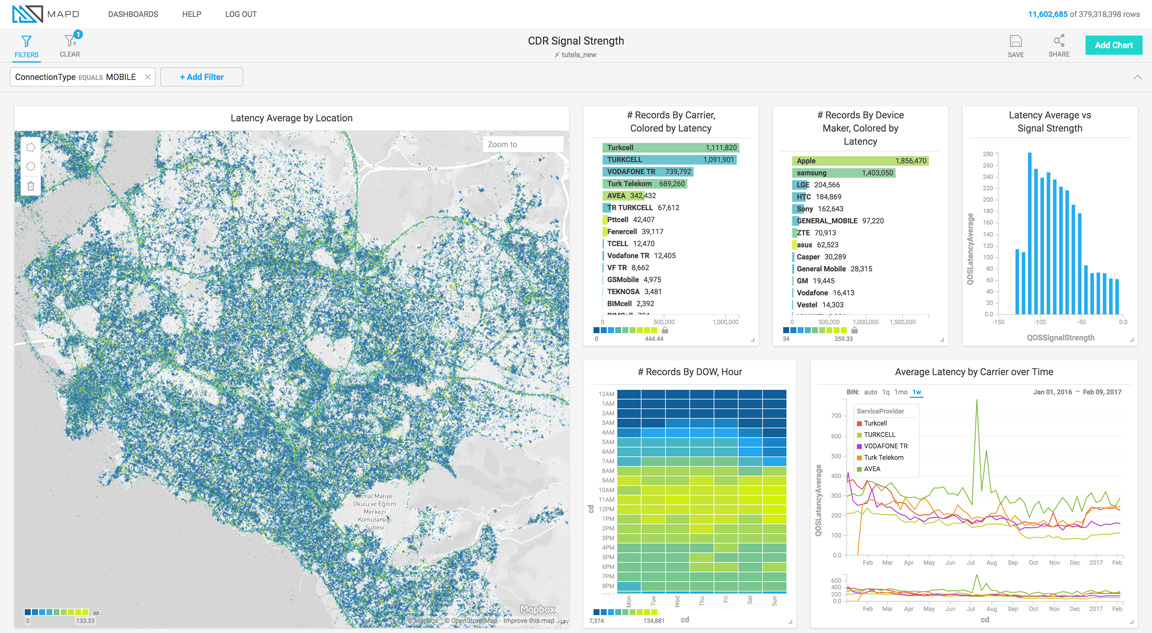 On the top of their unique architecture, MapD launched MapD Immerse data visualization platform that enables working with huge geospatial datasets like never before. The company has several demos on their website, and I recommend you to play around with it. Without any tricks, hacks, aggregations, and generalizations it querries massive databases and immediately shows the results using Mapbox engine. It’s very impressive.

MapD’s products are well suited for a range of big data use cases, including GIS, location intelligence, and social media analytics among others. Early adopters have included Fortune 500 companies in the telecom, retail, finance and adtech sectors.

The capabilities and GPU-powered data analysis and visualizations and MapD’s platform on the top of it are amazing, and it will sooner or later become the industry standard. Geospatial industry must wait a bit for the raster data support by MapD but the effects available today with vector data are promissing.