Twitter, Swarm? Forget about them! Try out Local Snaps app.

If you’re reading this blog, you’re most likely a serious geo-geek. You are no stranger to GPS tech and your heart beats faster when you see a cool map. But being in a spatial state of mind means also to suffer… It hurts when you see a great idea, which is wasting its potential by not fully utilising the context of location.

Let’s take as an example Twitter. It’s a brilliant service which taught 1 billion of its users that you can communicate your thoughts using just 140 signs. The location-compotent is there but it doesn’t bring any value added neither to users nor to Twitter itself.

Have you ever imagined how would the Twitter look like if it had been designed by a geo-geek? I have and I think that the best answer to this question is a new Android app called Local Snaps. The app allows you to connect your experiences and ideas with your physical location and display it on a map. It is something that you’ve always wanted to see on Twitter but it was never there. 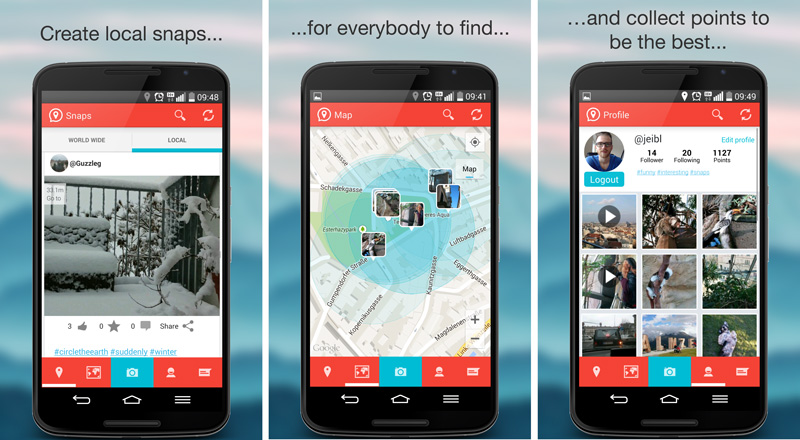 The idea for the app is simple. It allows you to share with the world your “Snaps” which are moments captured with photos or videos. The photo/video is than displayed on the map or in the news feed. Similarly to Twitter when you publish something the whole world can see it but on the other hand you can also view “Snaps” of everyone else on Earth. Every photo gets you points. When someone views, likes and comments on your photo it gets you additional points. So basically the app takes the best features of Twitter and Foursquare’s Swarm (which introduced the concept of gamefication in location-based apps) and connects them together.

The app is really well designed. User interface is simple, intuitive and not overloaded with plenty of unnecessary features. I must say that I’m really surprised how fast this thing works. Newly developed apps, especially those which process a lot of photos or videos tend to get slow or crush. I’ve been using Local Snaps for couple of days now and I haven’t seen any of these issues.

THE RISE OF LOCATION-BASED GIANT?

Is there a big future in front of Local Snaps? Will it be the next Twitter or at least Foursquare? I hope so. It’s a million dollar idea followed by a great app.

But be aware!!! The app is highly addictive.

Sponsored Article
Smart Cities is one of the biggest technology trends of the year, more and more governments across the world are starting to understand the potential behind the concept and are beginning to invest in Public-Private partnerships to make Cities smarter and environmental friendly.
While the idea behind Smart Cities sounds futuristic and cool, the truth is, this is going to be one massive data collection project and someone has to generate the data (Read more: Data data everywhere and not a byte to eat – The Data Challenge in Smart Cities)

The obvious first step in the attempt to create a geospatial framework is ensure that georeferencing of the resources that are disturbed in the different map layers is complete. Assume that such a framework is available and the concerned officials in the Smart City understand the need to share and update the available information. A network of sensors could then be used to collect information in the public cloud; road conditions, traffic flow, parking availability, GeoMedicine, Emergency Applications like the one currently available in Denmark  would all be easily accessed using your smartphone “SmartCity” App.  – “Cocktail of Technologies for Smart Cities“, Francis Ortiz Ocaña

Geotagging and Data collection are big challenges when it comes to creating a geospatial framework that can enable projects like Smart Cities to take off.   Crowd sourcing the data collection process is definitely a great idea but unless we figure out a way to make it interesting for people to start geotagging public utilities, this might be a challenge. Nevertheless, we need an user friendly application that can be used to collect Geospatial data . 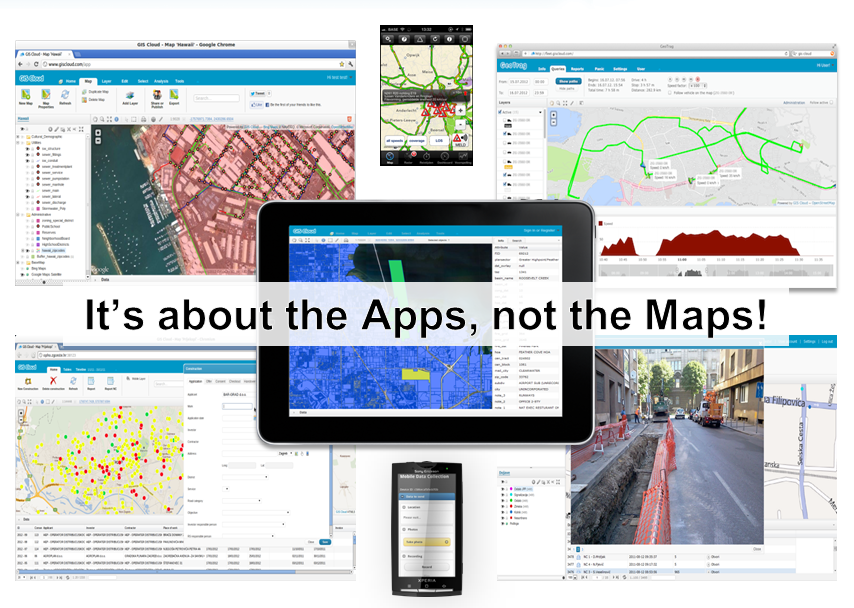 There are lots of Geospatial data collection apps available in the Play store (Free GIS Apps). Feeling Ducky (Yes, that’s a real thing. Check out DuckDuckGo), the search engine redirected to GIS Cloud’s Mobile Data Collection App page and considering that Iyke had used this app back in June 2013 for a National Population Census project (Real-time Mobile Data Collection App for Android and iOS), it seemed like a good idea to play around with it.

It’s got everything that one would expect from a Geospatial Data Collection app. You can

Things that make the App even better

There are lots of free GIS apps available, some of them offer functionality similar to the one that MDC app had, but the biggest advantage with the MDC was that GIS Cloud had Developer Options. Not every Government/Organization wants to wait for the company to create solutions from their data and in such cases, the developer options means that they are empowered to let the community use their data & platform to build custom solutions.