Here’s a summary of our highlighted satellite observations from the last two months. Observations are based on Copernicus Sentinel-2 satellites’ acquisitions. Although the autumn was not as varied by sudden atmospheric changes as the summer, it is still full of many astonishing observations. Starting with September 25th we celebrated World Rivers Day. Rivers provide us with drinking water, irrigation, transportation, and much more. We should take this opportunity to discuss and focus on possible threats and dangers, such as pollution or the long-term effects of increasingly frequent droughts. Below we can see the Mississippi River – the second-longest river in the United States. It’s flowing through ten states and is the birthplace of water skiing. 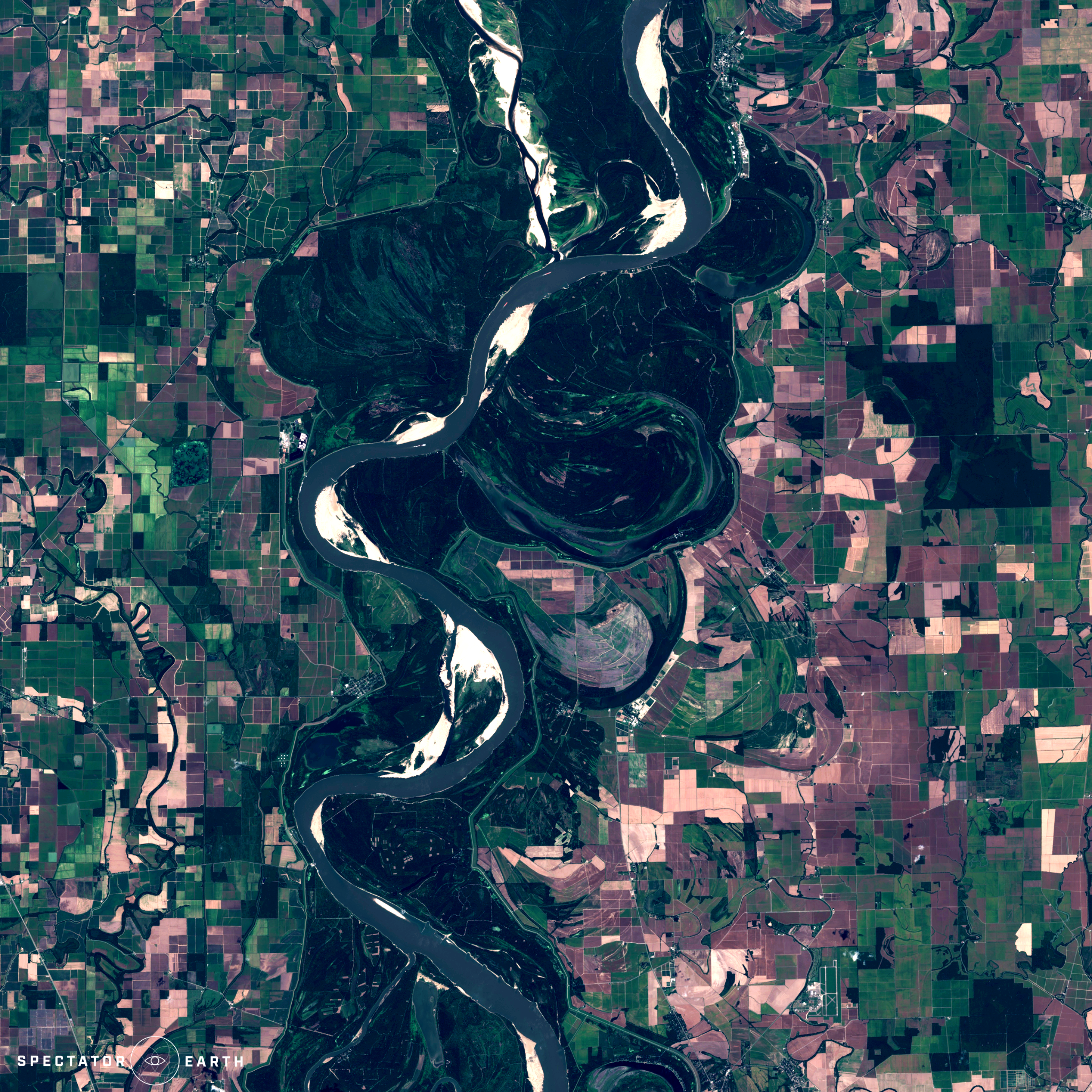 Sentinel-2 image of the Mississippi River – view on the map.

The continuation of wildfires in Autumn

With the start of the fall on September 23rd, one could expect cooler temperatures, and thus also a leveling off of occurring wildfires. Unfortunately, Autumn 2022 still hit us with devastating wildfires, including a huge one in Zhetikara District in Kazahstan and the “Cedar Creek Fire” just 15 miles east of Oakridge in Oregon. The fire was estimated to be more than 92 thousand acres. Additional fires spotted this fall so far include: 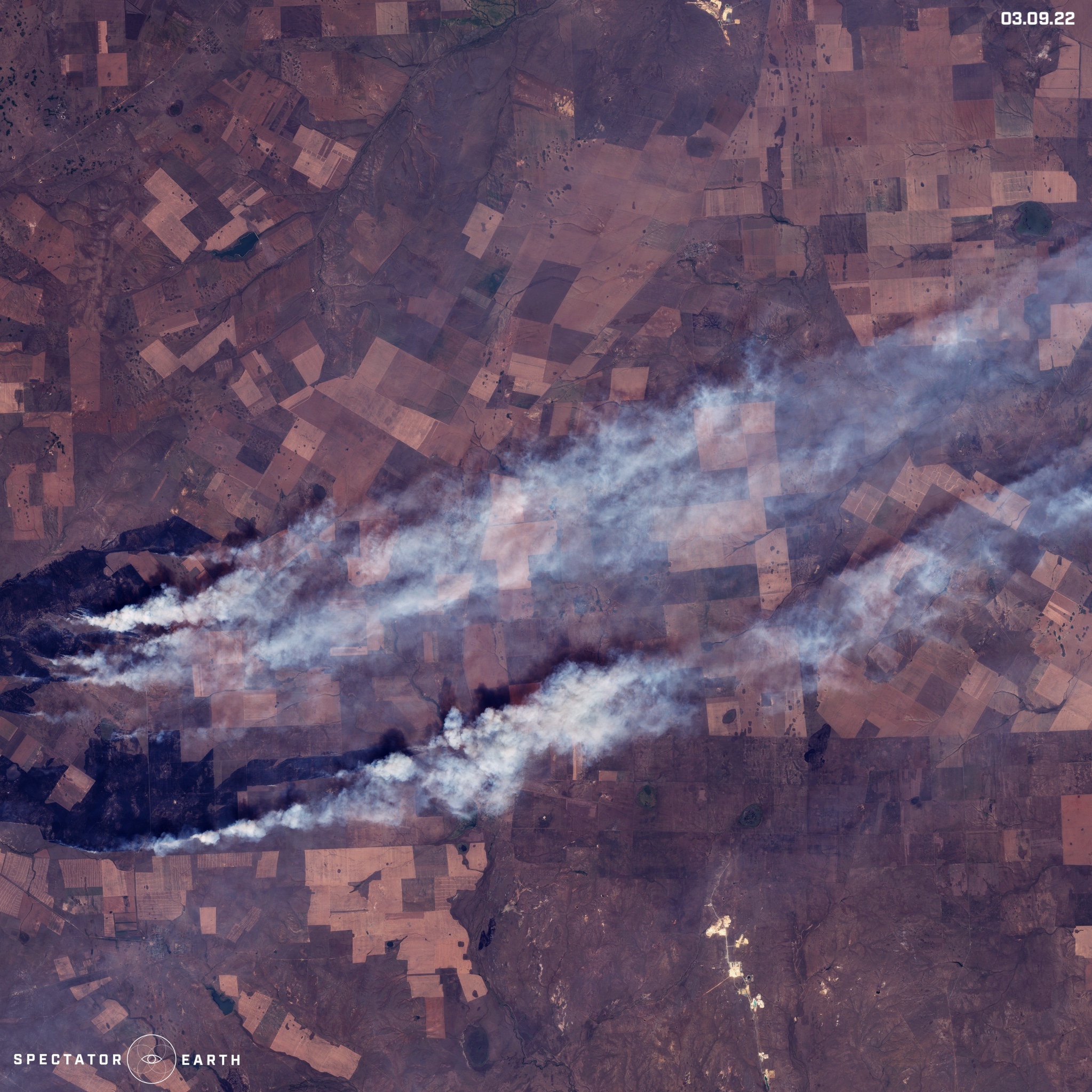 Fire in Zhetikara District in Kazakhstan – view on the map. 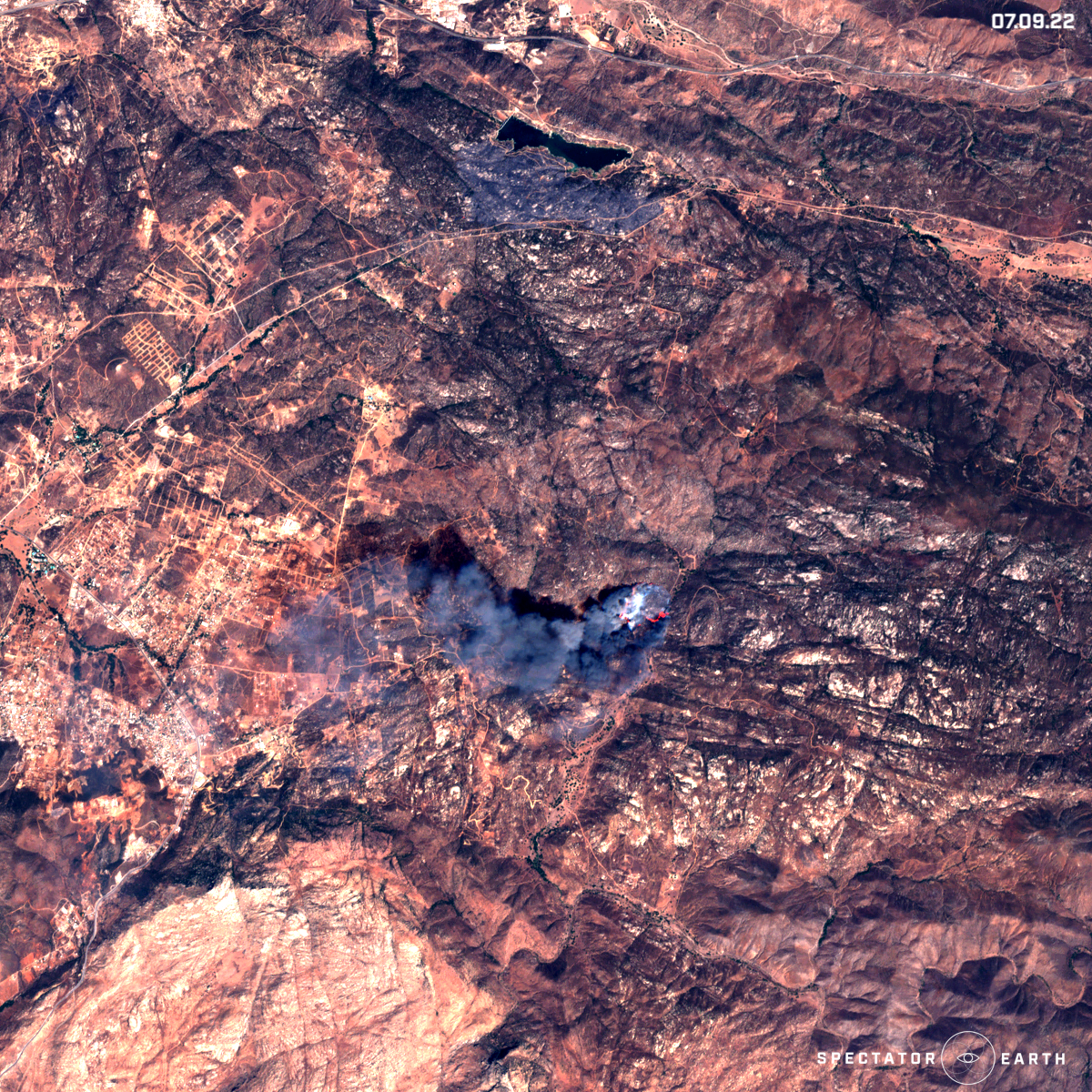 Sentinel-2 image of fire in Tecate – view on the map. 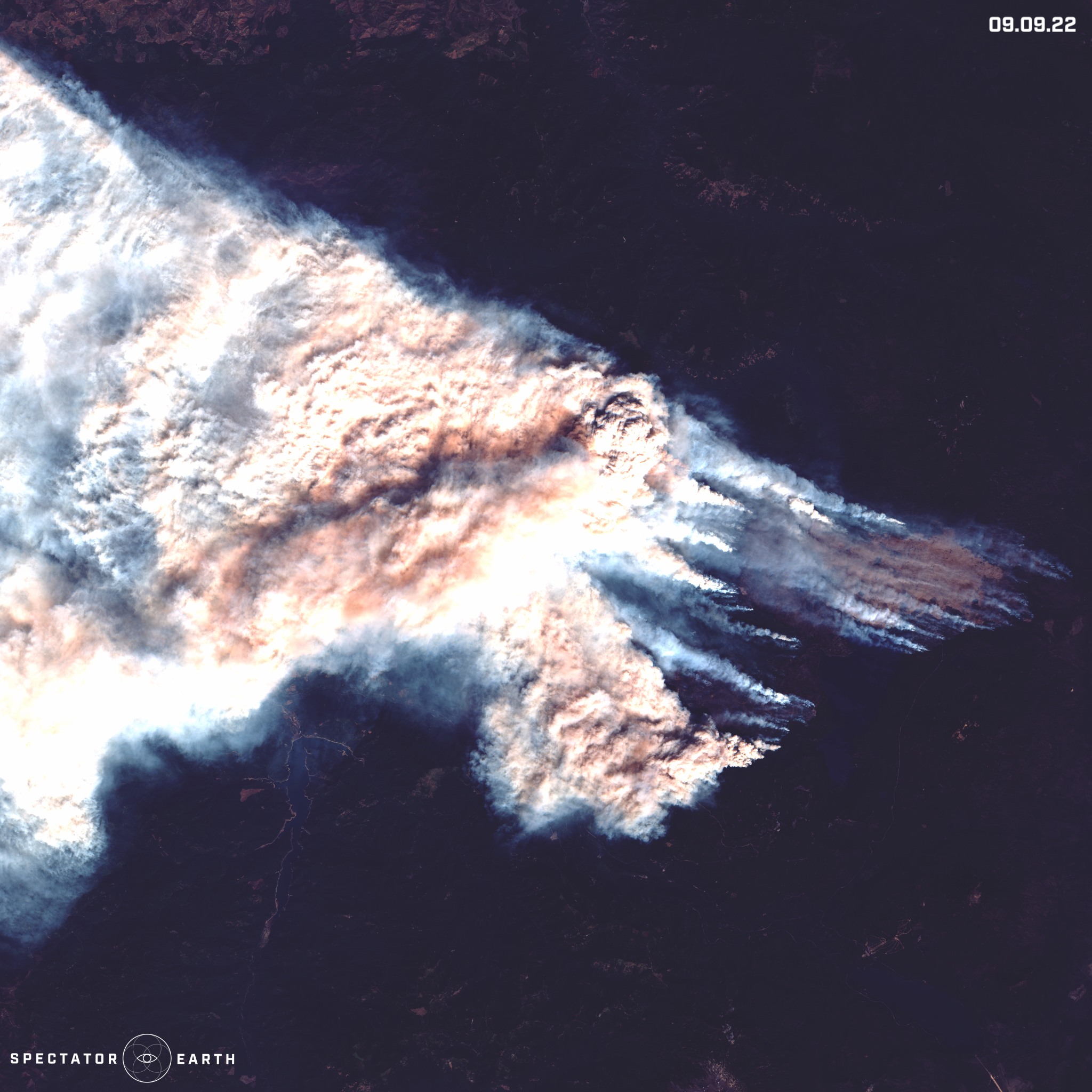 Cedar Creek Fire on the east of Oakridge – view on the map. 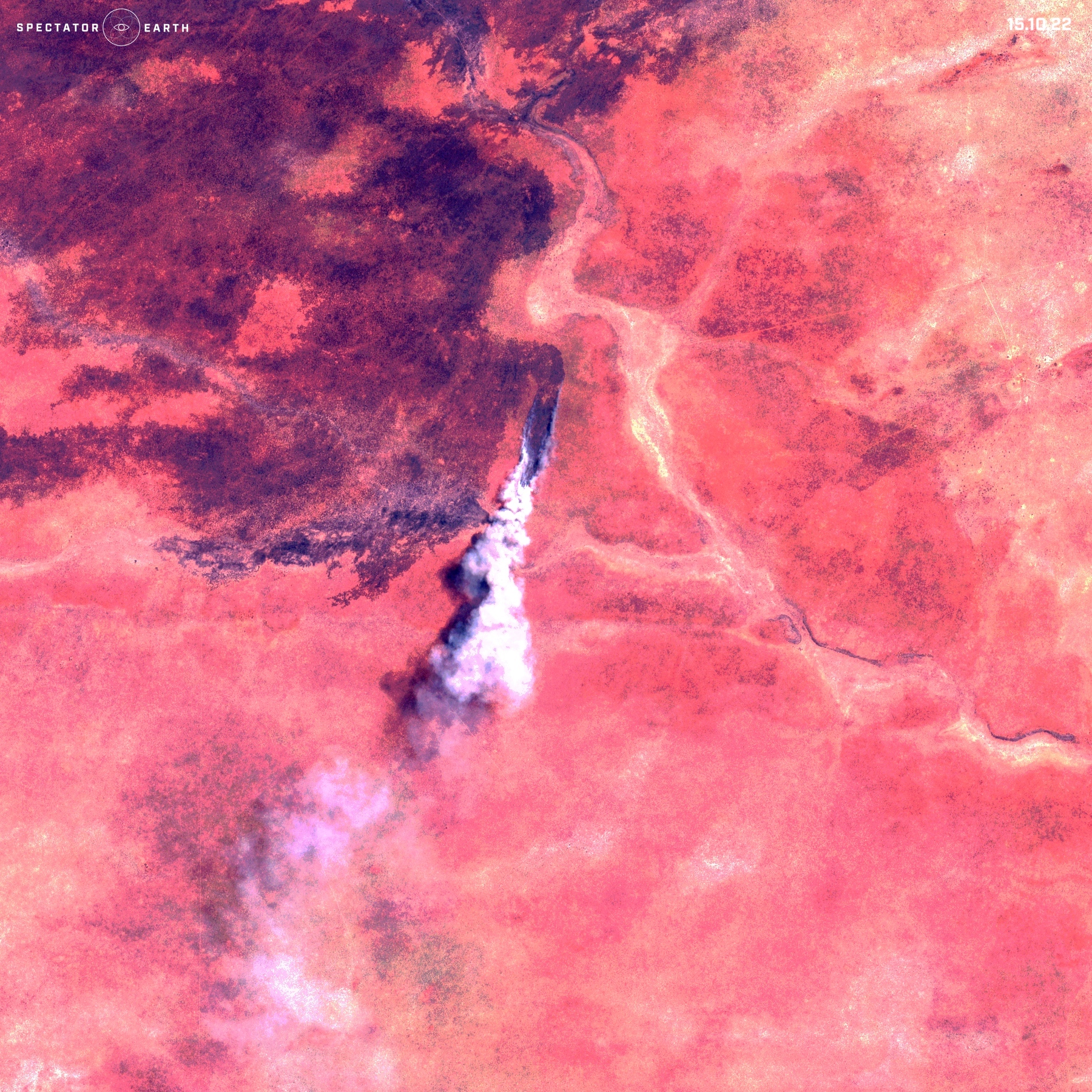 Fire in Namibia near Gam in Otjozondjupa Region – view on the map. 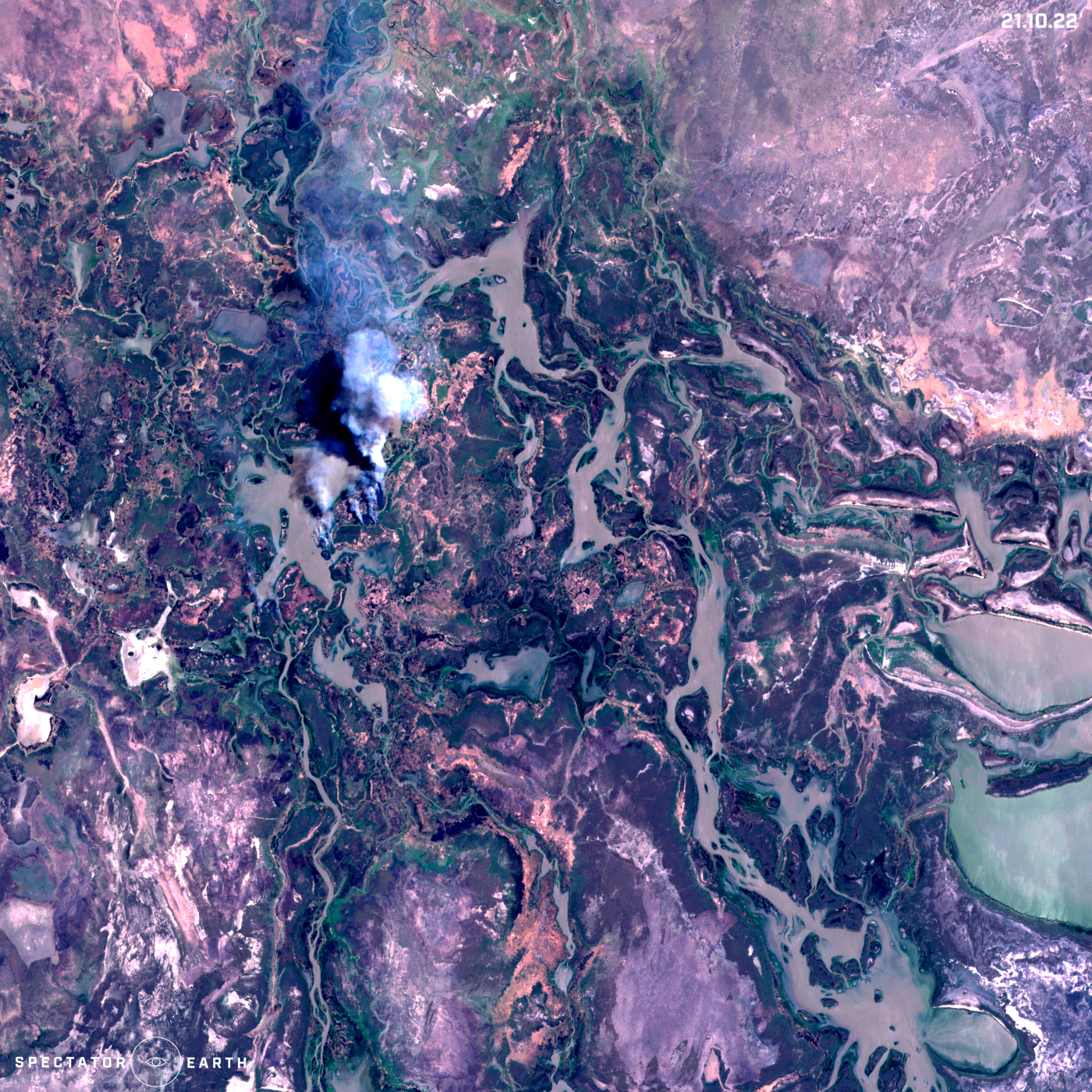 Other effects of the climate change

As far as the effects of climate change are concerned, this time we focused mostly on what was going on near the poles. We can observe melting glaciers, a strong indication of the change that is happening to our planet’s climate. Rapid glacial melts in Antarctica and Greenland are influencing ocean currents, as well as rising sea levels. Over here we have some examples of visible changes in a span of just a few years. First, we have Freemanbreen glacier, which is one of the primary southern outlet glaciers in Svalbard. In the summer of 2022, the glacier experienced likely the most extensive melt in the region in at least the last 50 years (check out summer observations 2022). Another detectable effect of global warming is the melting of the Twitcher Glacier in Antarctica, in just six years. Rapid movement of glacier parts can be observed also in the central part of Antarctica. The latest changes in the Brunt Ice Shelf are signalling that it will probably break off and create an iceberg soon.

Changes of the Freemanbreen glacier in Svalbard – view on the map.

The melting of the Twitcher Glacier over the past 6 years – view on the map.

Rapid movement of a part of Brunt Ice Shelf – view on the map.

However recent changes are not exclusively connected to the poles. The beginning of Autumn was filled with hurricanes and typhoons. One of the most talked about hurricanes was hurricane Ian, which had devastating consequences for the state of Florida. In the presented animation mixed pollutants and waste products along with silt, are visible on the coastline.

The aftermath of Hurricane Ian – view on the map.

Even though volcanic activity isn’t directly related to seasonal changes, statistically volcanos are 18% more likely to erupt during the winter months than at any other time of year (season for volcanic eruptions). However, we can observe most volcanic eruptions no matter the time of the year. A great example of this would be the latest changes in the Nishinoshima volcano – with a certain decrease in activity compared to the latest weeks.

Changes of Nishinoshima volcano in the last few weeks – view on the map.

Satellite imagery enables us to follow situations and events happening all over the world. On September 17 there was an opening ceremony for the Vistula Spit Canal in Poland, which allows bypassing of the Russian Strait of Baltyisk. Below we can see the construction of the Canal which started in February 2019. Moving to more eastern territories through satellite observations we can also monitor real-time events in Crimea. The image below shows Kerch Bridge in Crimea, before the massive explosion resulting in great damage. 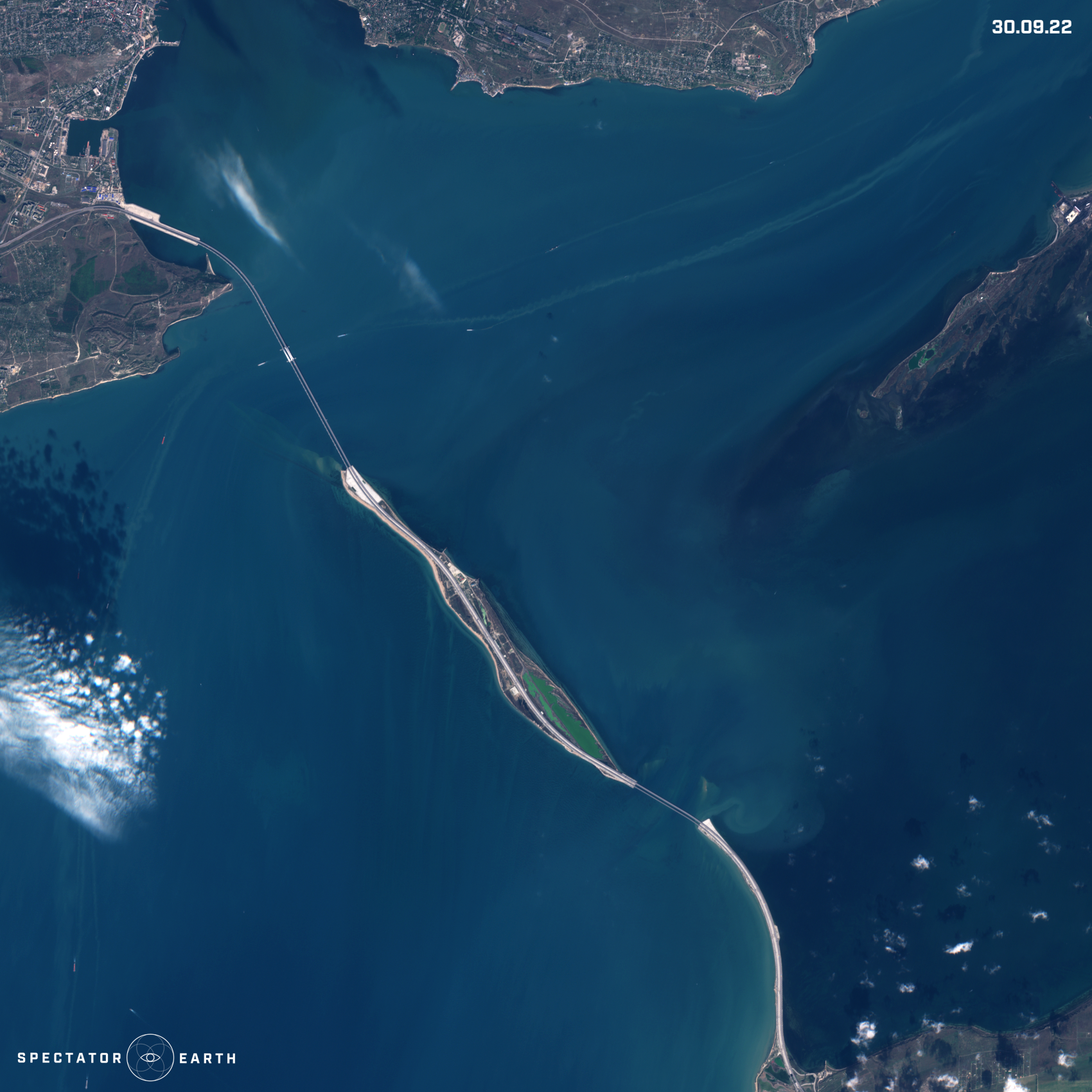 Sentinel2 image of Kerch Bridge in Crimea, before the massive explosion – view on the map.

The construction of the Vistula Spit Canal in Poland – view on the map.

Say thanks for this article (0)
Marta Weber
2 posts
Want to be an author?

Deforestation and forest degradation take the second place in terms of greenhouse gas emissions after the burning of fossil fuels. Together with peat land fires they accounted for around 15% of global anthropogenic emissions of carbon dioxide between 1997 and 2006 and thus are a key driver of global climate change.

What is forest degradation?

Forest degradation is a qualitative change of forest structure as a result of anthropogenic or natural disturbances. The main anthropogenic driver in (sub)tropical countries is unsustainable logging caused by an expansion of timber demand due to economic and population growth. Other meaningful contributors are burning, disease or insect infestations, shifting cultivation, fuelwood extraction and the defragmentation of intact woody landscapes through deforestation.

The faces of degradation are manifold: it may present a small-scale textual change of the canopy structure or height, subtle disruptions, but can also end up in almost deforested areas with numerous patches of bare soil. Forest degradation always entails a loss in carbon structure, which can sour up to 75% depending on the location, type of forest, the intensity and extent of degradation. Apart from the decrease of above-ground-biomass, forest degradation is often a precursor to further forest loss, for instance when logging areas expand and finally end up in deforestation. Deforestation has been a successful application domain of earth observation data for many years leading to numerous studies, map products and initiatives. In contrast, the mapping of forest degradation is more challenging and still in early stages owing to the complexity of the concept: It becomes manifested in a often subtle change in forest canopy structure that is more difficult to detect and quantify than its complete removal. Earth observation has the potential to capture those forms of degradation that have a measurable effect on the canopy structure such as a change in spectral response and fractions or the formation of canopy gaps. Degradation processes which occur under the canopy of forests such as fuelwood extraction and understorey grazing are not detectible by remote sensing altogether.

The methods developed and tested rely on multi-resolution optical, synthetic aperture radar (SAR) or LiDAR data. Each sensor type has strengths and deficiencies. The combination of data from different sensor types can help to overcome shortcomings from a single source. Forest degradation has different effects in satellite imagery dependent on location and forest type. Thus, its detection requires rather a regional approach than a single monitoring strategy. The different degradation types determine the remote sensing method that will (need to be developed and) bring most success to capture it. Several methods have been developed and tested to capture areas of forest disturbance. The difficulty is the choice for an adequate method since degradation and forest type influence the signal backscatter in satellite imagery. The combination of methods and especially sensor types improves results. The capacity of detecting forest degradation relates to the intensity of disturbance – greater intensity is easier to detect. Also the characteristics of the data such as the spatial and temporal resolution of the satellite images influence the analysis of forest disturbances: higher spatial and temporal resolution images generally allow the detection of smaller scale disturbance. This usually implies limited study area and higher cost. 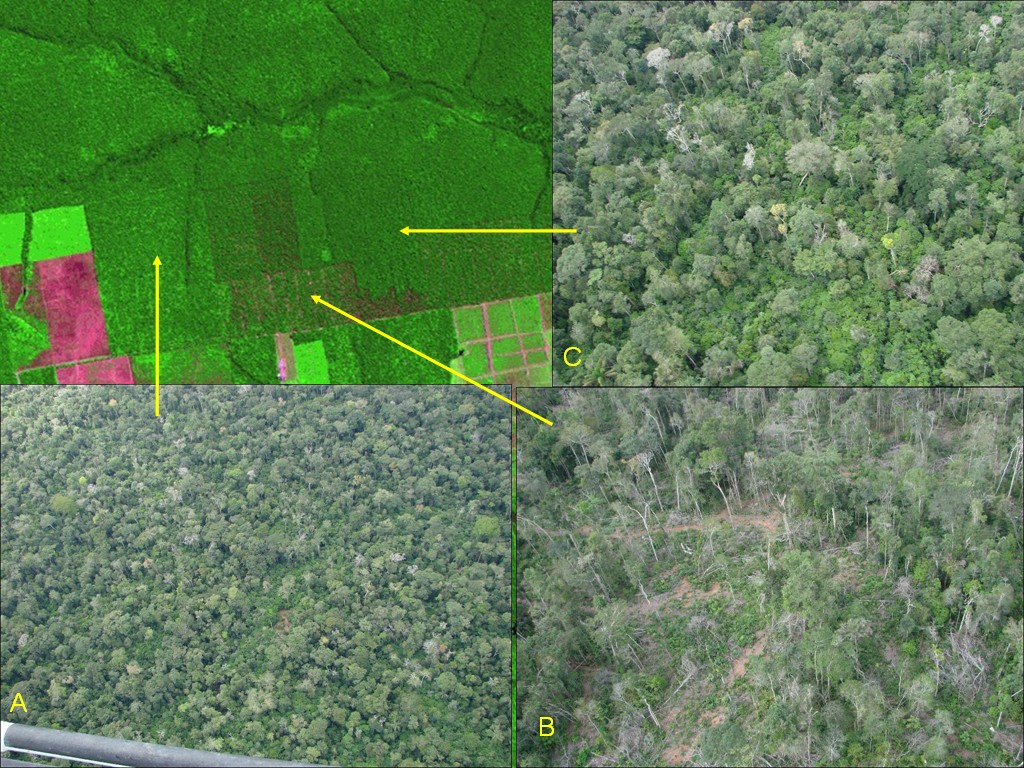