The story of Indian e-governance and Geospatial technology

The Government of India was one of the early players to adopt Geospatial technology in the country. Until a decade ago in India, government departments and agencies were the only sources of geospatial information. Opening up of mapping data and information by the state has enabled enhanced private sector participation in this sector. Several businesses and industries are now using geospatial services in India. Especially, for analysis of demography, competitiveness, expansion, risk management, target oriented marketing, planning of route etc.

11th Five Year Plan mandated the use of geospatial technologies in Government projects such as AgRIS, JNNURM and NLRMP, R-APDRP etc. boosted the growth in this sector. Besides, there are various other fields such as, schemes for construction and maintenance of roads, railways and waterways, civil aviation, public utility services, education, health, command area development, flood management. Government of India came up with a 65.62 Billion INR budgetary allocation for Geospatial Projects with an annual productive capacity of about 39.44 Billion, which paved way for its firm development augmented by initiatives like Digital India, Smart Cities and National GIS in the 12th (2012-2017) Five year Plan.

With flagship Digital India Initiative, the Department of Space (DoS) was assigned the task of extending the geospatial technology across different ministries. DoS came up with 160 such projects stretched across 58 Depts, viz, earth observation and geospatial (97), communication and navigation (30), technology development (10), meteorology (6), asset mapping and mobile applications (8), and others (9). Some of these projects will also render support to flagship programs of the Government of India (GoI), viz. AMRUT, Smart City, housing for all, Clean Ganga, Prime Minister Krishi Sinchayee Yojana (PMKSY), Digital India, etc.

“Based on recent developments and the drive coming from the central government, we had very effective discussion with 60 departments. Now, we have devised programs to meet their demands.” Quoted A.S. Kiran Kumar, Chairman, ISRO 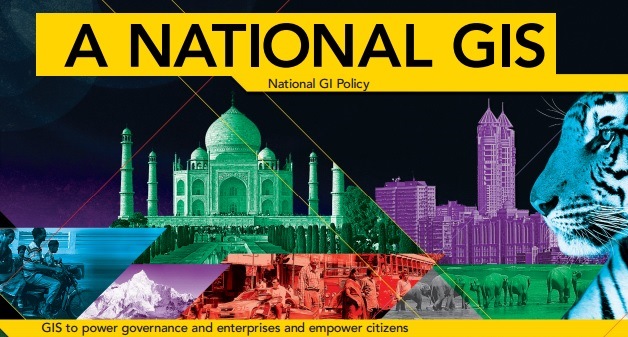 Key elements of India’s National GIS vision include the following:

Dr T. Ramasami, Ex-Secretary, Dept of Science and Technology quoted, “National GIS is a logical requirement—while e-Governance (e-Gov) is the current paradigm, the future is in embedding the GIS in governance and in establishing G (G signifying GIS-based)-Governance (G-Gov) as the next frontier. An institutional framework for National GIS is also a necessity, and evolving INGO [Indian National GIS Organization] must be a priority.”

How Geospatial Technology is making a difference

Geospatial technology has made its impact along the length and breadth of the Indian e-governance starting from rural development to smart cities. Agriculture, IMD, Town and Country Planning and many more have been GIS dependent for a very long time. Some of the projects are listed below.

GIS can help MGNREGA workers to get information about availability of work in the near locations, work site location information, real time transparent attendance, and payment information. At the same time, it will benefit the citizens by enabling geo portal for MGNREGA assets, which will enhance the concurrent social audit by citizens and facilitate feedback information on current status of work, quality validation, etc.

The Railways has developed a web-based application, Land Management Module, and the pilot project will start in Delhi. The GIS mapping of all Railway land in Delhi will help the authorities in curbing the menace of encroachments. From Geographic Information System (GIS) mapping of its vacant land to aerial survey of its railway station through drones, the Railways is adopting state-of-the-art technology for asset and project management.

Some of the activities under part-A:

Some of the activities under Part-B:

R-APDRP is one of the most widely implemented GIS project in India. Understanding the need almost all states have implemented the project without compulsion.

Formulation of GIS-based Master/Development Plans for 500 AMRUT Cities is one of the important reforms under AMRUT.  Most of all it is 100% centrally funded sub-scheme with budget outlay of Rs.515.00 crores.

The major objectives of the scheme are:

The National Geospatial Policy 2016 was just in time to solve the pain points of implementing geospatial technology in governance. The policy addresses issues on Data sharing and accessibility, capacity building, legal aspects (copyrights and piracy), public-private partnership. As all the aspects of geospatial integration is defined, the path ahead for the geospatial industry is clear and focussed.

“The $4 billion Indian geospatial industry in India is expected to become a $20 billion market by 2025, growing at a cumulative annual rate of 12 to 15 per cent. In addition, the estimated annual budget of government agencies for GIS services currently stands at $3 billion. This is expected to further increase with the government’s push for leveraging space and location technologies for development and governance” as stated by Union Minister of Urban Development, Housing and Urban Poverty Alleviation and Information and Broadcasting M. Venkaiah Naidu, the Geospatial industry is sure to revolutionise Indian Governance.

Will drones that fly and drive guide how we travel in future?

We are on the brink of a future where depending upon drones for tasks like delivery of goods, surveillance, inspection, construction site surveying, etc., would become a routine. But even as researchers and developers keep coming up with newer and newer applications for drones, there are some challenges that have always plagued them: A highly agile, airborne drone has limited battery life, while an energy-efficient ground-based robot is bound by spatial constraints.

That’s exactly what researchers at an AI lab at Massachusetts Institute of Technology strived to overcome by developing a robot that can both fly and drive. And then, they went a step ahead to show that these robots – which are more autonomous than ever – can maneuver around our skies, take stock of no-fly zones and navigate themselves to their designated parking spots and landing pads following a systematic, most efficiently planned path.

You know what this means, right? The algorithm which has been developed for these quadcopters is essentially taking us one step closer to the future of transportation, aka flying cars! According to the lead author of the research project, Brandon Araki, “The ability to both fly and drive is useful in environments with a lot of barriers, since you can fly over ground obstacles and drive under overhead obstacles. Normal drones can’t maneuver on the ground at all. A drone with wheels is much more mobile while having only a slight reduction in flying time.”

Of course, there are a lot of challenges that still need to be overcome before we reach the stage of scaling up this technology to the point where humans can be transported from one point to another, and the researchers also accept that. But as CSAIL Director Daniela Rus puts it, “We are inspired by the potential of a future in which flying cars could offer us fast, traffic-free transportation.”

Meanwhile, check out these beauties in action: