The largest and most precise 3D map of the Milky Way

“What do we know about the universe, and how do we know it? Where did the universe come from, and where is it going? Did the universe have a beginning, and if so, what happened before then? What is the nature of time? Will it ever come to an end? Can we go back in time? Recent breakthroughs in physics, made possible in part by fantastic new technologies, suggest answers to some of these longstanding questions. Someday these answers may seem as obvious to us as the earth orbiting the sun – or perhaps as ridiculous as a tower of tortoises. Only time (whatever that may be) will tell.” wrote Stephen Hawking in his 1988 Book ‘A Brief History of Time’.

Thirty-two years later, at 12:00 CET on 3 December 2020, the European Space Agency (ESA) released to the public data measured by its spacecraft Gaia and subsequently processed and validated by Scientists and Engineers. This is the first of a two-part release with the full data release planned for 2022. The data is expected to result in unlimited scientific discoveries, one of which is information on the history of our galaxy. Could this new data be the answer to some of Hawkins’ so-called “longstanding questions”? 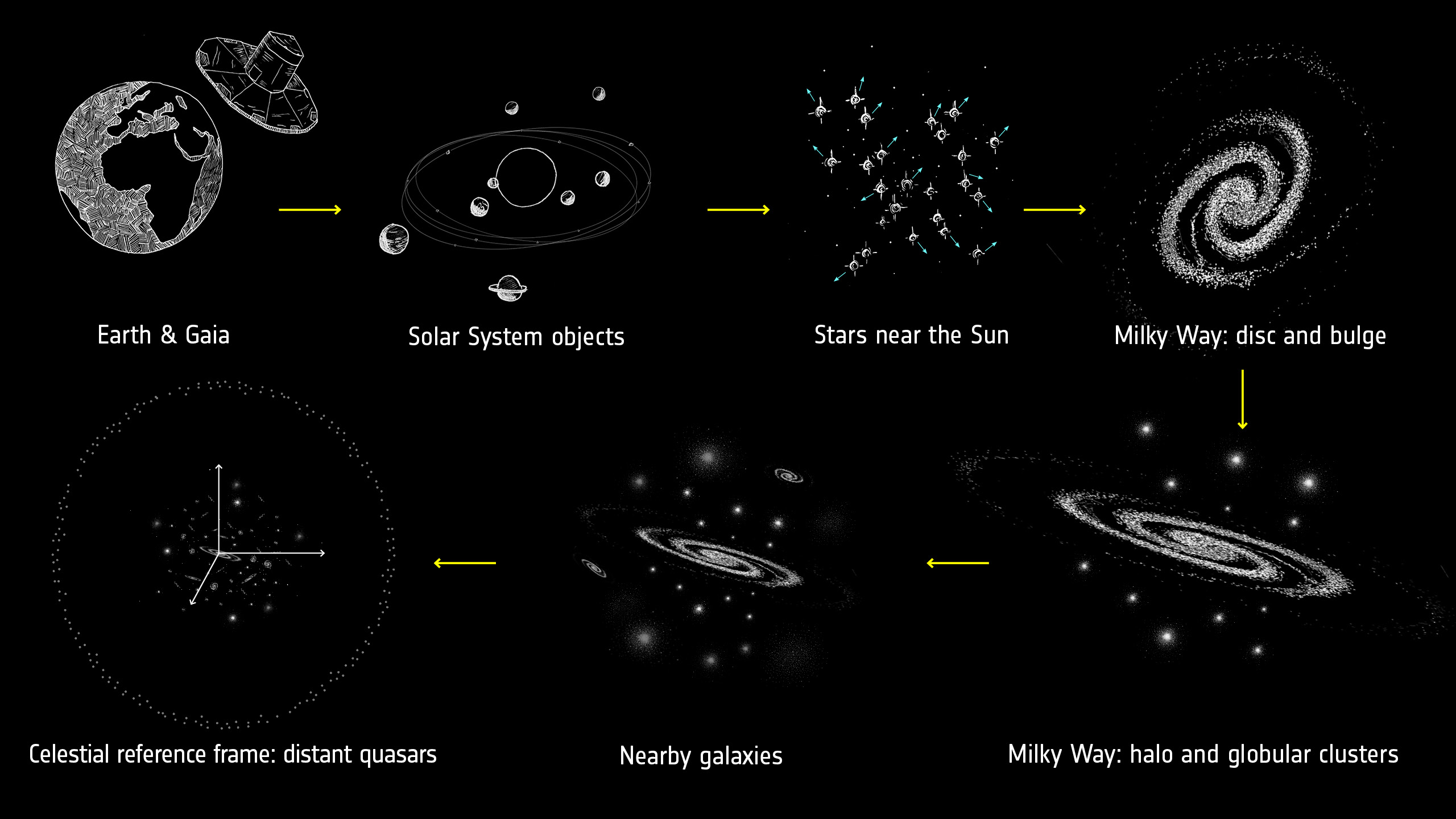 What is contained in the released Gaia data and what discoveries have been made so far?

Gaia’s new data is the largest and most precise information on our galaxy to date. The data contains a census of up to 300,000 stars in the solar neighbourhood; stars location, motion, and brightness measurement that are more precise than previous data; structures in the two galaxies near the Milky way; observed motions of extremely distant galaxies; just to name a few.

According to ESA’s Gaia Deputy Project Scientist, Jos de Bruijne, “The new Gaia data promise to be a treasure trove for astronomers.”

Gaia’s new data has provided insights on the evolutionary history of our galaxy and could predict its future. This is because it has enabled astronomers to trace the populations of old and new stars and study the pattern of moving stars at the edge of our galaxy. The motions of 40,000 stars 1.6 million years into the future have been predicted. The trails on this image show the displacement of stars on the sky 400 thousand years into the future.
Credit: ESA/Gaia/DPAC, CC BY-SA 3.0 IGO

Gaia has made possible the measurement of the acceleration of the Solar System to the rest frame of the universe, besides providing details on the shape of the Solar System’s orbit around the centre of the galaxy. Gaia has measured that our galaxy has a spiral structure and that the solar system moves on an orbit around the galactic centre. The new data has also revealed that the Sun’s path is not straight but slightly curved.

There are many more discoveries relating to the origin, structure and history of our galaxy-and by extension the universe, that stand to be made from the Gaia data.

Gaia’s journey so far and the future

Gaia was launched in 2013 to make the largest, most precise 3-dimensional map of our Galaxy by surveying more than a thousand million stars. The spacecraft has been mapping the stars from its orbit at a distance of 1.5 million km beyond the sun’s orbit. The mission was planned to end after 5 years of operation (July 2019), but the mission was extended to 31 December 2025 (subject to a mid-term review in 2022).

We look forward to the galaxy’s mysteries this data will help uncover.

Gaia’s new data takes us to the Milky Way’s anticentre and beyond. The European Space Agency. (2020). Retrieved 08 December 2020, from https://www.esa.int/Science_Exploration/Space_Science/Gaia/Gaia_s_new_data_takes_us_to_the_Milky_Way_s_anticentre_and_beyond.

Say thanks for this article (0)
Rose Njambi
10 posts
Want to be an author?
The community is supported by:

With COVID-19 making contactless technology solutions a top priority for enterprises across the globe, the use of drones for mapping, surveillance, inspection, asset management, medical deliveries, et al, has grown exponentially. And policymakers are struggling to keep up with the rapid advances in drone technologies.

Today, at least 143 nations have enacted some form of drone-related laws. These regulations range from outright bans of the technology to relatively unrestricted flight, but most legislations focus on how the drone is being operated – such as within the visual line of sight or beyond it.

VPN company Surfshark took a deep dive into drone operation laws in over 200 countries and found that drone regulations in each country generally fell into one of the following seven categories:

The maps below show how drones are being regulated around the world as of October 2020. And don’t get thrown off by the phrase ‘privacy laws’ since Surfshark has likely used the term to integrate the research more closely with its own industry domain.

Want to see the data in a country-wise tabular format instead of maps? Scroll to the bottom of the story.

Drone operation laws around the world

Interestingly, there is at least one country on every continent that allows BVLOS operations. 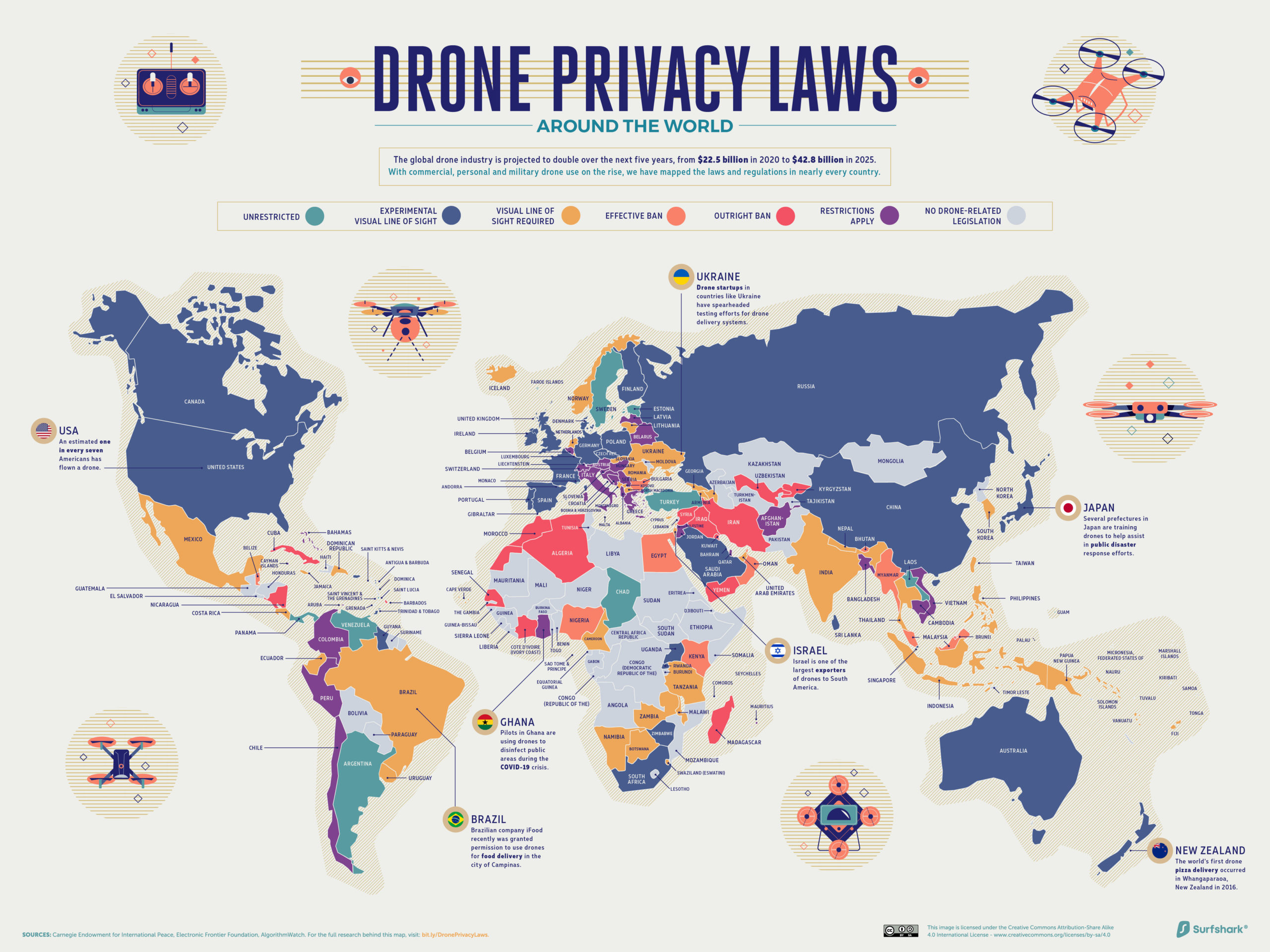 In North America, countries with experimental BVLOS drone legislation include Canada, the United States, the Cayman Islands, Antigua and Barbuda, and other small Caribbean nations. This trend is likely related to the presence of tech giants like Amazon, Walmart, and DHL, which are researching ways to incorporate drones into their last-mile delivery infrastructure. 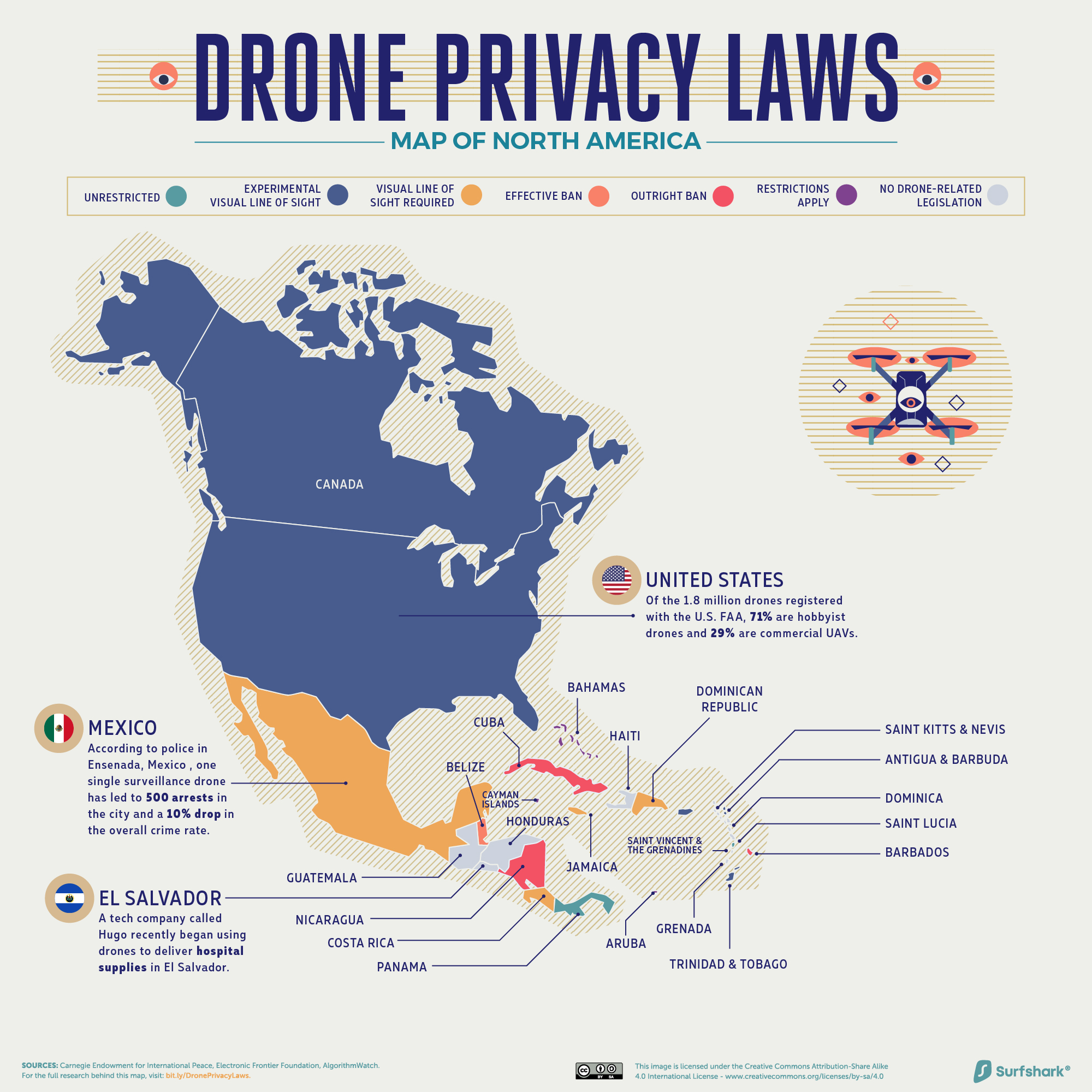 Europe has some of the most liberal drone regulations of any continent. 27 percent of the countries here fall into the ‘unrestricted’ category, more than the 18 percent global average and the most of any continent. But that’s not to say that the operational guidelines are not adequate. 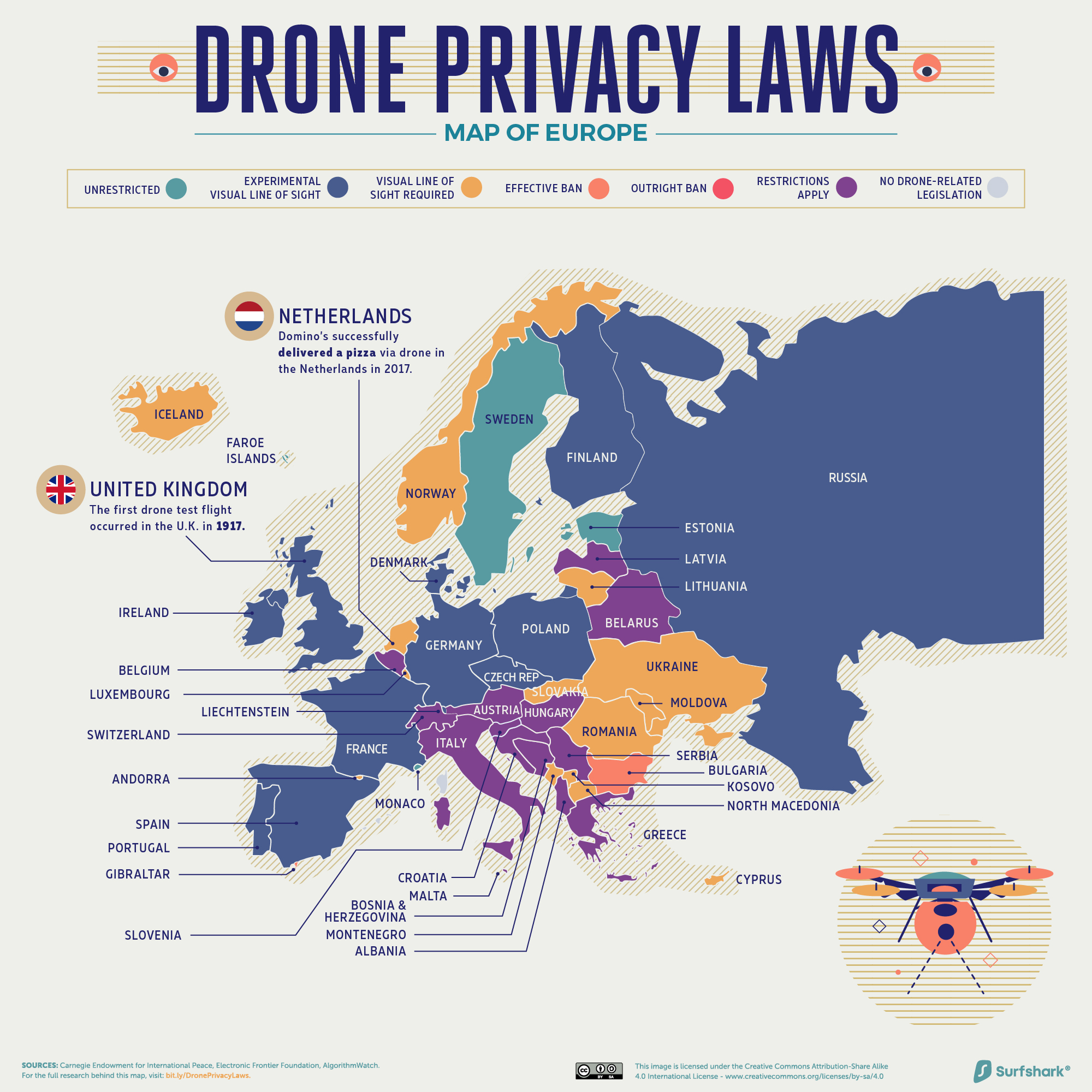 Here, only one country, Guyana, has provisions that allow for BVLOS flights – the fewest of any continent. Other countries in South America have specific drone rules geared toward safety and environmental conservation. In Peru, for example, drone flights cannot last longer than an hour. In Ecuador, drones are completely banned on the Galapagos Islands save for approved scientific usage. 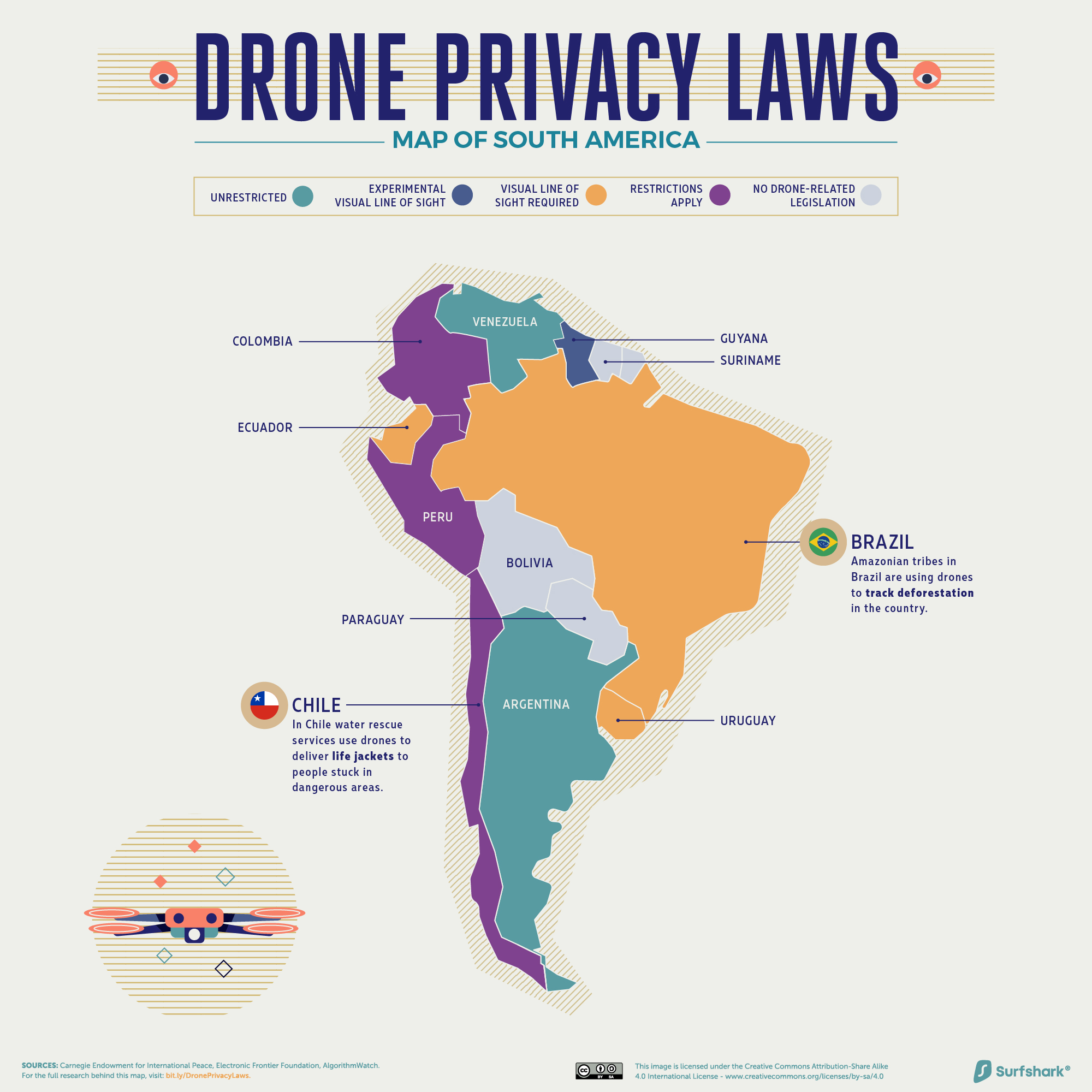 Drone operation laws in the Middle East and Central Asia

In this part of the world, a number of countries have effectively banned drones. In Bhutan, for example, only the government can operate drones. Overall, 15 percent of countries in Asia have effective bans on drones, far more than the 8 percent global average and the largest share of any continent. 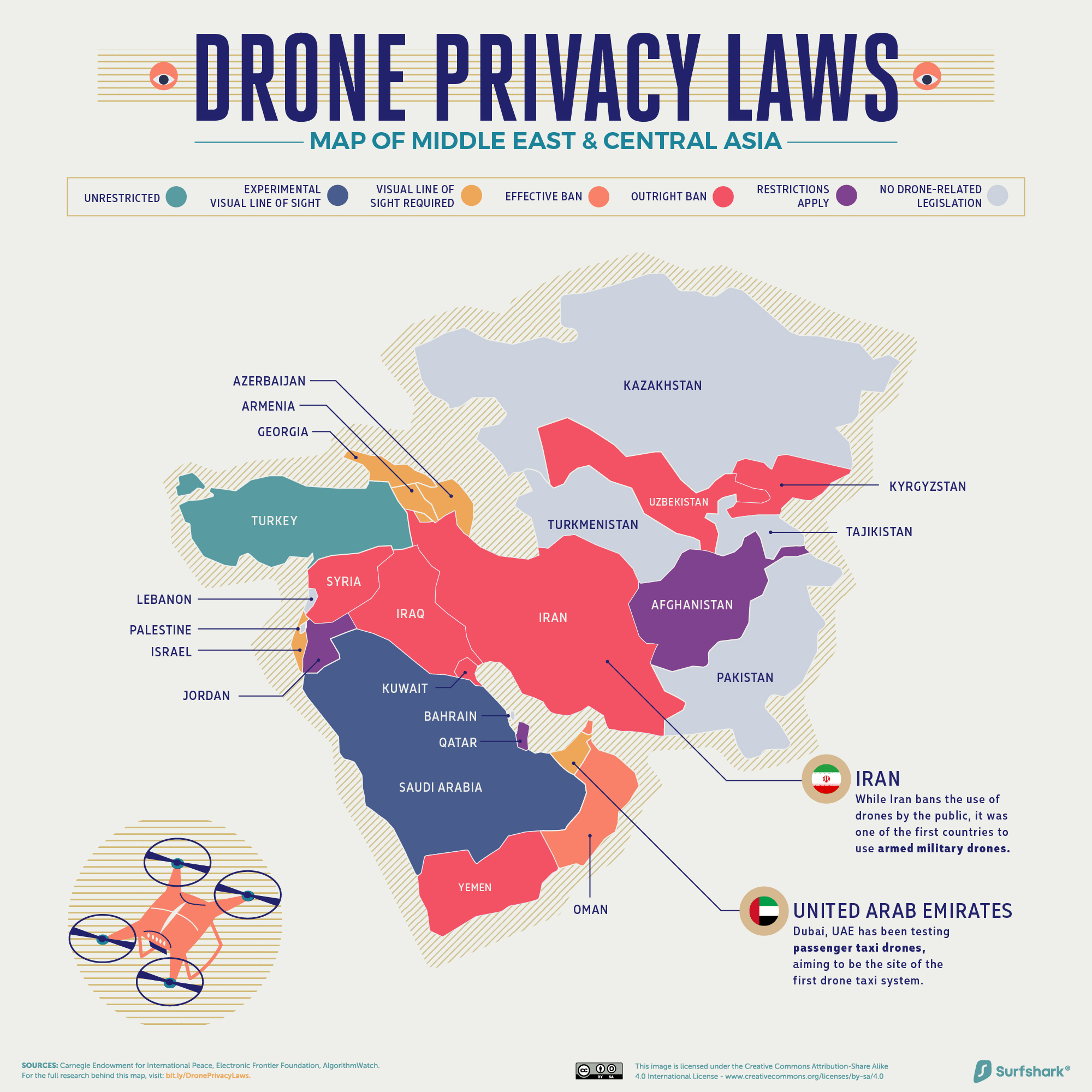 More than half of all countries in Africa have no drone-related legislation. And of the countries that do, 21 percent have outrightly banned drones – the largest share of any continent. In another 13 percent, drones are technically legal, but obtaining permission to fly from the authorities is extremely difficult. At the same time, there are several examples of innovation on the continent. In Ghana and Rwanda, for example, drones are allowed to fly beyond the line of sight to deliver medical supplies to remote villages. [The above maps were updated on Dec 1, 2020, to add the ‘restrictions apply’ category for better distinction]