The geospatial field is expected to reach a worth of about $10.12 billion by 2023, with a general expected increase of 9.6% between the years 2017 and 2023. However, this research report wasn’t created solely for a generalized view at geospatial technologic and scientific prominence. Rather, Market and Markets delved into the relevance of separate facets in the field. The report surmised that the functionality of mapping was valued at the largest market value in 2016.

A breakdown of the study’s primary participants, differentiated by company size, designation level and region.

This prominence is attributed to the increasing usage of maps for planning work, more specifically in agricultural and urban construction. Maps have also been reaching a steady usage in security, transport, and environmental development projects. The study also attributed much of this new mapping implementation to have been brought about by the rapid construction rates of both India and China.

However, maps aren’t the only facet of GIS that are becoming more popular. The sub field of GIS Collecting – or gathering data by drone or by hand, is expected to become more prominent in the general outlook for geospatial sciences.

This hardware market of geospatial sciences is expected to be one of the primary contributors to the steady increase of the overall profitability of geospatial products, with the usage of a multitude of data gathering methods attributing to higher costs as spatial imaging technology advances over time. GIS Collecting is reaching a mobile audience unique in comparison to other subsets of geospatial sciences, through applications like ArcGIS’ Collector Application. Further improvements on LiDAR technology – particularly in the use of transportation and self driving cars – are expected to also contribute a major amount of financial bolstering to the field of gesopatial collecting as well.

Construction, however, is determined to be the main contributor to the overall profitability of GIS, with the utilization of a greater variety of tech. Tying into the previous prominence of both India and China as the primary contributors to the profitability of geospatial fields, the APAC (Asia-Pacific) region is still projected to remain one of the largest markets for mapping technology.

Most of this construction boom is expected to be tied to providing housing for continuing population growth; planning for rural communities – such as those at risk for forest fires – is also a prevalent field. GIS planning in construction can be viewed in the planning for renewable and non-renewable energy sources. Fields of energy innovation are expected to expand in relevance in their own right in the upcoming years, as well.

Say thanks for this article (0)
Olivia Harne
8 posts
Want to be an author?
The community is supported by 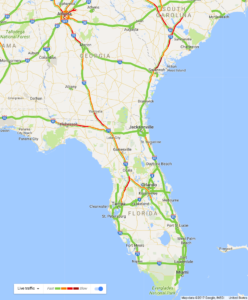 As Florida braces for Hurricane Irma’s impact over this weekend, Governor Rick Scott is urging citizens to leverage technology to stay safe and updated about the situation on the ground. The state’s disaster preparation officials are working with Google’s crisis response team to reflect road closures in Google Maps in real-time.

Gov. Scott said in a press conference, “We have traffic cameras on every major roadway in the state and are clearing traffic issues in real-time, so we can keep people moving.” So, if the state is forced to close any roads in the aftermath of the storm, a quick Google Search will allow people to find out the state of the road network around them.

Google also released a statement about its efforts, saying, “Our thoughts are with those affected by Hurricane Irma. To provide access to accurate and useful transportation information, we use algorithmic and manual methods to account for everyday and emergency road closures. We’re working directly with Florida officials to help provide up-to-date information to those affected by the storm. These road closures will also appear on our Irma Crisis Map, embedded as part of our SOS Alert on Search.”

Apart from Google Maps, the state also officially recommended using the Gas Buddy app to find out which filling stations had fuel available, and which were not operational. Gas Buddy has updated its app to reflect easy-to-read ‘no gas’ and ‘no power’ symbols. Gov. Scott also noted that travel site Expedia will be updating hotel occupancy rates in real-time. And we have already seen during Hurricane Harvey how Snapchat’s location-sharing tool Snap Map became the go-to resource for people trying to check on their family, friends, and family.

It’s in times like these that you truly understand how spatial technologies help people to come together in a focused manner and give them the information they need much more quickly.