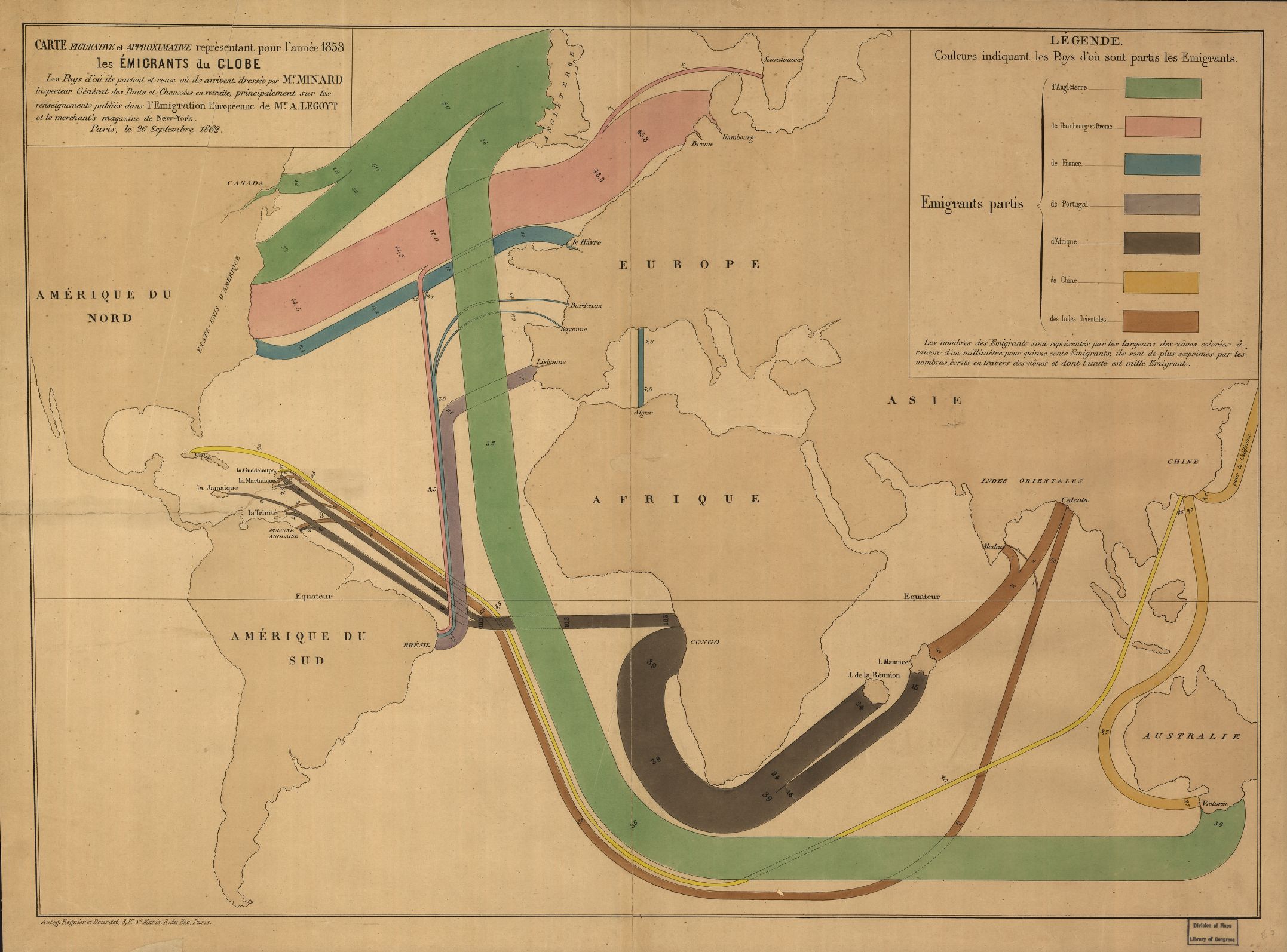 Mapping migration patterns is one of the most basic yet complicated challange of every cartographer. Today and 2 centuries ago. A French archival map designed by a French engineer, Charles Minard in 1858 shows one the approaches of mapping the spatio-temporal changes to distribution of a phenomena.

Charles Minard was the one who pioneered the “flow line” – a cartographic presentation method which is considered to be modern still today. With this tool Minard was able to map three dimensions: the route, the type (colour) , and the size of phenomena (using the width of the flow line). When you compare this map from 1858 with a modern flow line maps, you can spot one interesting difference. 150 years ago the phenomena were mapped from a port to port via ocean routes.  Today we would rather map it from a centroid to centroid or a capital to capital typically using the shortest path.

Matthew Edney, professor of the history of cartography at the University of Southern Maine, commented on the map of Charles Minard:

This focus [on flow] perhaps stemmed from his professional work as a civil engineer who specialized in bridges and canals, that is, with managing the flows of traffic and water.

Although the map has been designed back in 1858 and therefore the data presented is not very accurate, the map looks great and strikingly modern.

Recently, I had a pleasure to talk to  Amir Farhand –  founder & CEO of Mappt and Scantherma.

Hi Amir, thanks for talking to us today.

Hi Aleks, thanks for having me.

Mappt is a low­barrier­to­entry Android mobile GIS app that breaks away from the traditional dependency on pre­existing desktop packages. Mappt seeks to democractise the mobile GIS industry by providing a simple interface, all within a competitively priced package that is easily deployable to field teams.

Mappt is trying to break the mould of the traditional GIS app ­ some are either an extension of n existing desktop solution, while others (although independent) are low on features and very specific. We have put many features into Mappt, but at the same time have maintained the most open possible platform to allow users the lowest barrier to entry. We expect users to be able to pick up an Android tablet, download and install Mappt and use it within five minutes. Better still, if your data is on Google Drive or on an SD Card, you can directly import it into Mappt ‘on the go’ making it perfect for offline use. Furthermore, Mappt also has no ‘iTax’, which means you don’t need a specific hardware type to use it. It works on almost all Android tablets running 4.1 and up.

Who are your customers?

Since we’re based here in Perth, Western Australia, it was easy to find mining customers. We focused on what we knew best, and given that Scantherma has a strong foundation in the remote sensing industry in Australia, this was the perfect place to start. Companies such as Samsung, C&T and SinoSteel have been great supporters, especially early on. Now, Mappt has grown to include customers from a variety of different industries and from different  countries; ranging from energy and agriculture through to environmental protection and NGOs. Most interestingly, we have even worked on customised versions of Mappt, such as a version called ‘Fire Tracker’ for Raindance Systems who build helicopter incendiary systems for fire mapping and management. 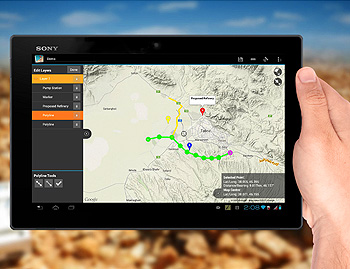 What’s the business model behind the Mappt project?

We’re still in startup mode and really want to shake the mobile GIS industry up. First and foremost, our aim is to democratise the mobile GIS industry by allowing more people to access this technology in a way that can really impact how they go about their every day tasks. This is important to us because traditionally GIS technology has been limited by the cost of both hardware and software. Mappt on the other hand is inexpensive and better still, its 100% useable with even cheapest Android hardware. During my time as CEO of Scantherma, Ive seen many cases where it was hard to get technology into the hands of the people that could really use it, and even harder because sometimes they could not necessarily afford it. With Mappt we want to give the same level of expertise and ability to someone in a developed country, as we do to those in developing nations.

Over last two years (when I’ve first seen it) the app has developed significantly. Where are you right now? What is your vision on where you to be with Mappt?

This has been propelled mostly by market forces and the fantastic support we’ve had from vendor independent companies. We have received a lot of support in implementing specific features that clients required in order to best fit into their business operations. Right now we’re concentrating on refinement, but by mid 2015 we hope to have embedded additional features such as WFS/WMS support, photo geotagging, geodatabase support as well as CAD/DXF data importing. The vision within the next 2 years is to release a full SDK/API, and open Mappt up to customised development by our users. Again, we want to democratise the mobile GIS industry with Mappt; and this ‘expansion pack’ will allow for this to occur.

You’ve manage to transform you idea into business. Please give some hints to our Geoawesome readers who would also like to transform their own ideas into real­-life project.

Having lived and breathed the ‘startup’ entrepreneurial culture for most of my life, I would have to say you need to be extremely focused, goal orientated and even a little stubborn with your ideas and dreams. For innovation to happen we often start by asking ourselves what is the solution to the problem, then we work backwards; but sometimes these solutions are never materialised due to commercial forces. As innovators we sometimes need to be diligent in separating our products between who our users are and who our clients are (i.e. who is going to pay for our products?). I feel that through commercialisation, true innovation can really grow and in­turn provide better solutions, and inevitably growth.