Space-based Solar Power: In the future We’ll have satellites that beam energy back to Earth 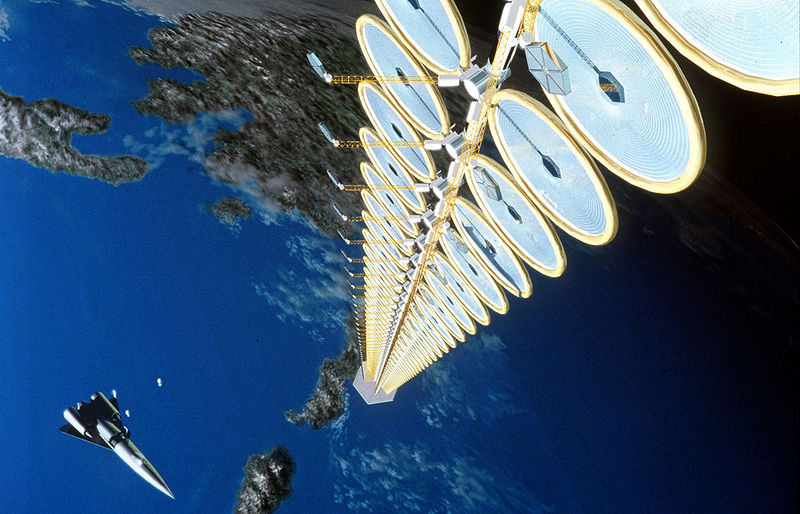 Solar energy has often been regarded as one of the permanent and clean solutions to the ever increasingly demand for energy in the Industrialized world that we have inherited. This idea becomes geo-awesome when they visualize sending satellites to outer space that will enable tapping solar power and beaming it down to Earth! “Star Trek” inspired engineers, aren’t they?!

Although this idea has been around for a while now, the grandiose plan was quickly dismissed citing lack of technology and more importantly economic feasibility. Now, one of the Space pioneers and Former President of India, Dr. Kalam has unveiled an ambitious plan for an internationally developed Space Solar Power (SSP) System

A long-time champion of space-based solar power, Kalam says first steps will include the establishment of a “world space knowledge platform” under which specialists from the U.S., India and other spacefaring nations will join forces to develop a “societal” SSP mission. “This World Space Knowledge Platform, which is to be an International Virtual Laboratory, will take the form of a coalition of leading academic institutions in space and energy science and technology, [with] one or two in each of the partner nations. Guided and coordinated by the World Space Knowledge Platform’s International Advisory Committee, they would be directed toward bringing out an International Feasibility Study for SSP,” says Kalam. Source: AviationWeek (read more about the plan at Aviation week).

In the past, NASA, JAXA and other space agencies around the globe have proposed several ideas that never saw the light of the day. To overcome these hurdles, Dr. Kalam is proposing an international venture similar to the lines of the International Space Station.

Satellites and Space stations being designed and built just for the sake of harnessing the solar energy may not be a geomatics dream but surely it is time for us geomatics engineers to start thinking about “Universal Geomatics” 😉 Remote sensing has been used in recent years to identify locations for placing wind turbines and for tapping tidal energy, now its time for us to start thinking of “where to place our Solar Energy Satellites”! Space is the next frontier!

Apple’s WWDC 2013 conference has begun yesterday in San Francisco. During the first day Apple introduced new iOS 7 for iPhones, new MacBook Air and among several other cool things new operating system for its computers called OS X Mavericks… and this is when it gets interesting for Geoawesomeness readers. With the new operating system Apple Maps (no matter how bad you think they are) comes as a dedicated app for mac computers.

The app looks every similar to Maps on iOS, with infocards, flyover and directions. However a key feature which might be the only thing Apple users will love it is that you can send destination from Mac to your iPhone. Apple was first to introduce a true integration of all devices and they continue to go this way… which might actually generate significant boost in Apple Maps’ usage.

Apple launched Maps last year with iOS 6. The application was designed to replace Google Maps as Apple’s built-in mapping application. Soon after users got their hands on it, though, they found it lacking in accuracy, overall usability, and feature set.  Apple soon after apologized for Maps’ issues, saying that it would do a better job of delivering the software. In the meantime, Apple suggested that users try out the many other mapping applications already available on the platform through the App Store.

Although the seamless integration with iPhone is a really cool feature will it be enough to win Google Maps users? Ii certainly depends of two things: where you live and your LoAA (Level-of-Apple-Addiction). In same areas in world the accuracy of maps and number of POIs in Apple Maps is decent and in some like Central and Eastern Europe is really not too good… but Apple believers will always use and advocate everything that comes from Cupertino. What do you think?