Roads of Death: Maps with a social conscience!

Transportation and Communication technology have helped improve connectivity and interaction between people and nations across the world, making our earth – “the global village”. But sadly more than 1.2 million people are being killed on the roads each year and worryingly that number is increasingly rapidly.

More people are being killed in the developing world in road accidents than in the developed world. Countries with a poor economic background account for 90% of road fatalities. At this rate, road accidents will soon become the 5th leading cause of death in these countries. (Source: WHO Global Burden of Disease Study). In most of the cases with such accidents, it is simply because of distractions and indifference to the surroundings. People need to be lectured to and informed about the seriousness of the problem.

Sometimes mere statistics and graphs are not enough to raise awareness to such problems. Statements and articles don’t create the same impact as a picture or a map. Maps with a social conscience as I like to term it are required to shake people and organizations to take the problem seriously. “Roads Kill” is a Pulitzer centre initiative that hopes to raise visibility on this growing public health crisis.

The Interactive map with a social conscience from Pulitzer Centre on Road accidents across the globe.

Highway fatalities are also a “poverty-inducing problem,” according to Jose Luis Irigoyen, a highway safety expert at the World Bank. “It’s costing on average between 1 and 3 percent of GDP” in low- and middle-income countries, he says, an amount that can offset the billions of dollars in aid money that these countries currently receive.

The UN had adopted a resolution in 2010 calling for a “Decade of Action” on road safety. The objective of the call is to stabilize and eventually reverse the upward trend in road fatalities—saving an estimated 5 million lives during the period.

Geoawesomeness is deeply rooted and passionate towards making the world a better and safer place to live and it’s satisfying to see more and more applications of spatial science to help the world. I hope we drive more safe and be more agilent when crossing the streets. Let’s make the roads a safer place! Peace. 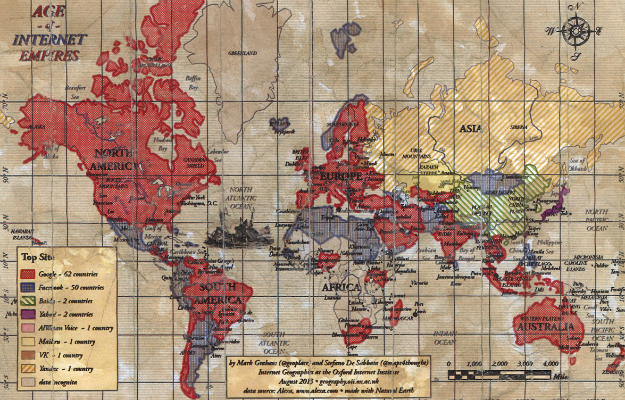 The Interesting Spatial Analytics on the most visited websites by country carried out by Oxford Internet Institute using public data from the web traffic service Alexa, showed that Google is still the King of the internet.

The Map below presents that Google and Facebook still reigned supreme among internet users across the world with some few exceptions. 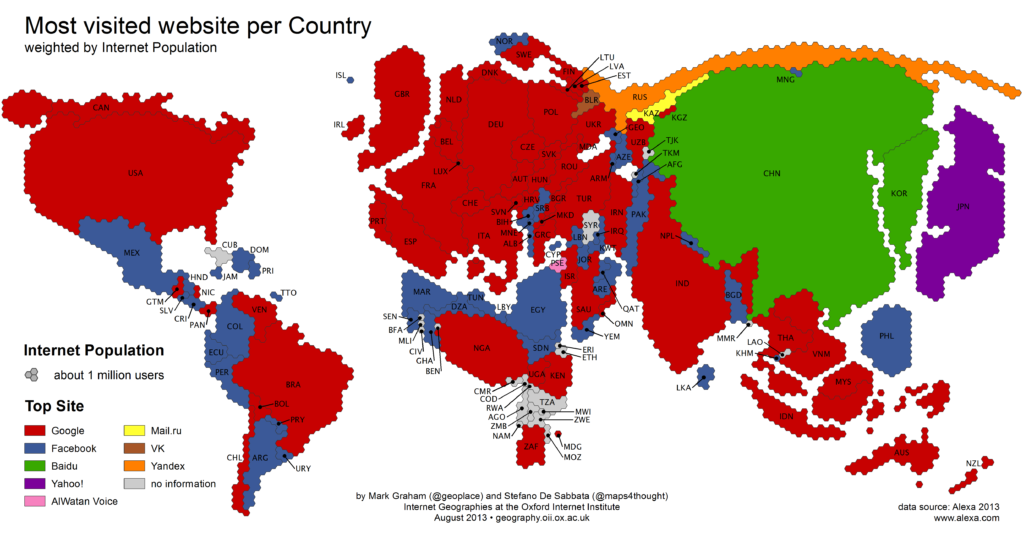 The Russian Mail.ru was found most popular in Kazakhtan, Al-Watan Voice newspaper dominates Palestine, Yahoo still in charge in Japan and Taiwan. Russian search engine, Yandex tops the list in Russia. Of course, Baidu tops Chinese web which obviously could be attributed to the part of Chinese government’s support.

The study clearly shows that Google is still the giant of the WWW as it emerged the top site in 62 countries out of the 120 countries studied. The study noted that the 50 countries that Facebook emerged the most popular, Google came second in 36 of them, the remaining 14, emerged  YouTube as the second most popular (YouTube,currently owned by Google).

NB: Please take cognizance of  blind spots in the survey because Alexa lacks information on countries with small Internet Populations including most of Sub-Saharan Africa.