The Quest for Insights: A Shift to Location Intelligence

The $5 billion dollar GIS and spatial analytics industry – expected to hit $10B by 2023 – has been dominated by legacy GIS tools and methods for years. As new types of streaming data from smartphones, sensors and connected cars continues to rise, the real-world application of location data has to evolve. The amount of data being generated – an estimated 2.5 quintillion bytes of data created every day – demands a more robust approach, including advanced analytics and machine learning to keep up with the always-on stream of information.

As new analytical methods and non-static data streams prompt a shift away from legacy GIS specialists towards a broader set of users and analytics, location data will become an increasingly pervasive factor in our everyday lives. This evolution will cause the use cases for location data to evolve as well. While location data was previously used exclusively by mapping experts and select government agencies, today location technology has applications across organizations and departments to make sense of more data and inform new kinds of business decisions.

The following trends underscore the need for a more accessible approach that LI brings to the table:

Retailers will start using customer and location data not just to plan the opening or closing of a store location, but to better understand exactly what role physical locations should play in the buyer’s journey. Some leading ecommerce brands are already creating micro stores to provide shoppers a place to try on online inventory or repurposing existing locations to serve as walk-in distribution centers for online purchases, providing the convenience of online shopping with the instant gratification of in-store pickup.

As an increasingly mobile and connected society, we generate a constant flow of data with a location component. By transitioning from GIS to location intelligence (LI), the ability to work with spatial data becomes more accessible to users of all levels and expertise, opening new doors and creating opportunities for organizations to work across data sets and gain insights never before available. Organizations may reimagine their entire business models to stay competitive, or cities evolve decade-old systems to better serve citizens. Already, consumers can see these insights creating subtle changes and improvements to the way they interact with brands, each other and their environments.

Say thanks for this article (0)
Javier de la Torre
2 posts
Want to be an author?
The community is supported by:

Satellite internet is expensive. The hardware will set you back by hundreds of millions of dollars, and the cost to deliver a satellite into space is no peanuts either (though it has come down considerably in the past few years). Companies like SpaceX and OneWeb are planning to work around this by flooding our skies with inexpensive small communication satellites.

But, traditional satellites hang around 22,000 miles above the Earth in the geosynchronous orbit (GEO) and are able to cater to a large area at once. Smallsats, on the other hand, float in the low Earth orbit (LEO) – which is at a distance of around 100 to 1,250 miles – and circle the Earth every 90 minutes. Their strength lies in numbers. To swathe the entire planet with coverage, you need hundreds of smallsats operating at once in what is known as a constellation. Manufacturing and launching so many satellites takes time –  lots of it.

But now, a startup called Astranis has come out of stealth mode to reveal that it has developed satellites the size of a mini-fridge for the geosynchronous orbit. So, while these mini sats will have all the benefits of low hardware costs, Astranis wouldn’t be burdened with launching hundreds of them just to become operational. The startup is convinced that this combination will allow it to offer satellite internet to users at the price of cellular data. 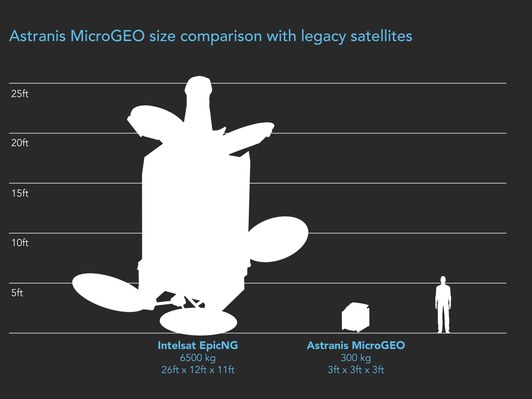 Last week, the company received a vote of confidence in the form of a $13.5 million funding round from venture-capital firm Andreessen Horowitz. “[Astranis] has put together the right technology and strategy to offer broadband connectivity anywhere on earth at a small fraction of what’s possible using traditional satellites,” Andreessen Horowitz says in a blog post.

With its initial designs, Astranis has achieved a bandwidth capacity of 10 Gbps per spacecraft. And the team says that it has a technology roadmap that can significantly increase that speed in future spacecraft designs. The startup plans to launch its first commercial satellite in 2019.

That said, the price tag is not the only reason why most of us are getting internet through a fully terrestrial connection. The other major issue with satellite internet is that of latency – it takes much longer for communication signals to travel to a satellite and back than it takes to travel through fiber optic cables. This means there is a considerable time lag between when information is requested and when it is received.

To that, Astranis explains, “What we found in studying this problem for a long time was that 95% of internet traffic isn’t latency sensitive — CDN traffic, video streaming, audio streaming, file downloads, social media posts, etc. The bandwidth crunch is a huge problem to solve but we realized there is low-hanging fruit here that we can go after by putting satellites one at a time in GEO and putting a dent in it immediately, vs LEO constellations where you have to put up hundreds of satellites (at a cost of billions of dollars) just to get started.”

The thing is, we simply are not able to get fiber optic cables everywhere. Areas like the Pacific Islands chain depend solely on satellite internet. There are 4 billion people in the world who are still deprived of access to the internet. So, latency doesn’t really seem like a bad trade-off. What do you think?