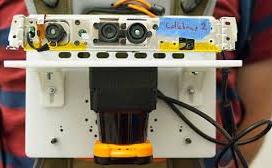 It is quite interesting that Simultaneous Localization And Mapping systems are becoming more and more portable and even wearable. This concept of SLAM technology for mapping had only been applied to robotic mapping.

Impressively, some researchers at MIT’s computer science and Artificial Intelligence Lab have gone ahead to develop a portable mapping system that transmits remotely a digital map of a wearer’s environment.

The system leverages different positioning technologies to localize and orient itself and at the same time mapping its environment. It uses a fitted GPS unit to track the wearer’s physical position, the LIDAR rangefinder to measure the return of light pulses in 270 degree arc as part of the Auto-mapping mechanism. The Gyroscopes in the system measures the tilt of the rangerfinder to adjust its readings accurately. The accelerometers measure the speed of the person wearing the device.   The barometer fitted in the system measures changes in air pressure which is used to adjust for when a firefighter or law enforcement person changes floors. Lastly, the device contains a camera that captures a comparative image of the environment.  The Operating Software captures 200 types of visual features from imagery involving patterns, topography, and three dimensional entities.  The information extracted from the imagery is compared against the sensor data to ensure the digital map is correct. It also allows the user to mark or delineate the area of interest.

The Device is worn on the chest and it is about the size of an iPad with a backpack carrying the additional components. Very Very Handy.

Check it out in this video clip below.

Data is certainly the biggest asset of the Internet Century and the World Bank, through its Global Facility for Disaster Reduction and Recovery (GFDRR) had launched the Open Cities Project back in November 2012 to create an open data ecosystem that will help provide innovative solutions to the urban planning and disaster risk management problems that many cities in South Asia face.  The Open Cities project is a component of the larger Open Data for Resilience Initiative (OpenDRI).

The primary goal of the Open Cities Mapping Project is to utilize GIS data such as road network, building and infrastructure maps and population data to help develop land use, emergency management and evacuation plans. These GIS models, tools and applications will greatly help the urban planner and administrators make better informed decisions.

Although GIS based models and applications have been around for a while now, most developing countries still lack detailed GIS infrastructure and a project like this is definitely going to add tremendous value both in terms of data and development of local expertise. Considering that all this information is available to the public as shapefiles and OpenStreetMap extracts (.osm file), it is going to be valuable for anyone who can think of a novel way to use this data.

Currently the Open Cities Mapping Project is active in three cities in South Asia: Colombo (Sri Lanka), Dhaka (Bangladesh) and Kathmandu (Nepal). These cities were chosen for their high disaster risk level, presence of existing World Bank activities, and local government cooperation in the project. Millions of people call South Asia their home and is one of the fastest growing urban regions in the world.

It is estimated that the total urban population will increase from 449 million in 2007, to 913 million in 2025, and subsequently to 1.32 billion in 2050. In addition, the GDP of SAR’s urban agglomerations contributes 25 percent to the region’s GDP, and is expected to increase significantly over the coming years. The growth and high population density in South Asia’s cities will continue to make them vulnerable to disasters if development is not properly managed. Only through a clear understanding of risks can communities achieve sustainable development and disaster resilience. The examples below highlight the work of Open Cities in three cities across South Asia to leverage community mapping and open data in the effort to meet these challenges.- Open Cities Website

The Open Cities project website lists case studies such as 3D Buildings showing primary building use in Dhaka, the Road Network map for Colombo and Critical Health Infrastructure in Kathmandu.

Links
Here’s the link to the Open Cities brochure. If you are interested in understanding how the project was planned and other related reports, documented by the world bank – link.