Coming home from work yesterday, my apartment had a very exotic furry smell to it. I also noticed weird footprints on the ground, much too large for insects, but nothing like my cat… After I checked my Pokédex I quickly found out, that it must have been a wild Pikachu, probably hiding somewhere behind my closet!

Luckily this didn’t actually happen, my apartment is still just as clean as I left it. Although I did have to take a detour going home because there was a road blocking. It was blocked due to a significant number of Pokémon trainer looking to collect their latest booty. Exactly that was the time I asked myself:

If you’ve followed current press you probably know, that Pokémon Gois an augmented reality game, using real-world landmarks for gaming content. You’ll find a virtual ‘Pokestop’ at real-world locations for your virtual restock and get rewarded for hunting little monsters spread out (seemingly) randomly around town.

Following the digital evolution of the recent years this discussion is not completely new. Looking back on the introduction of services like Google Street View, we can also see how digital content took influence on physical space. Home owners didn’t want their house depicted and Google reacted by blurring their houses as an opt-out of the digital environment.

Pokémon Go brings something new to the equation – it actually influences the physical behavior of people in private and also public space since its digital content can only be consumed at a specific location! People are hunting down Pokémon in all kind of situations, creating a controversial discussion about the game and especially its players (Holocaust memorial, White House, etc). The issue clearly lies in the spatial distribution of the digital critters. 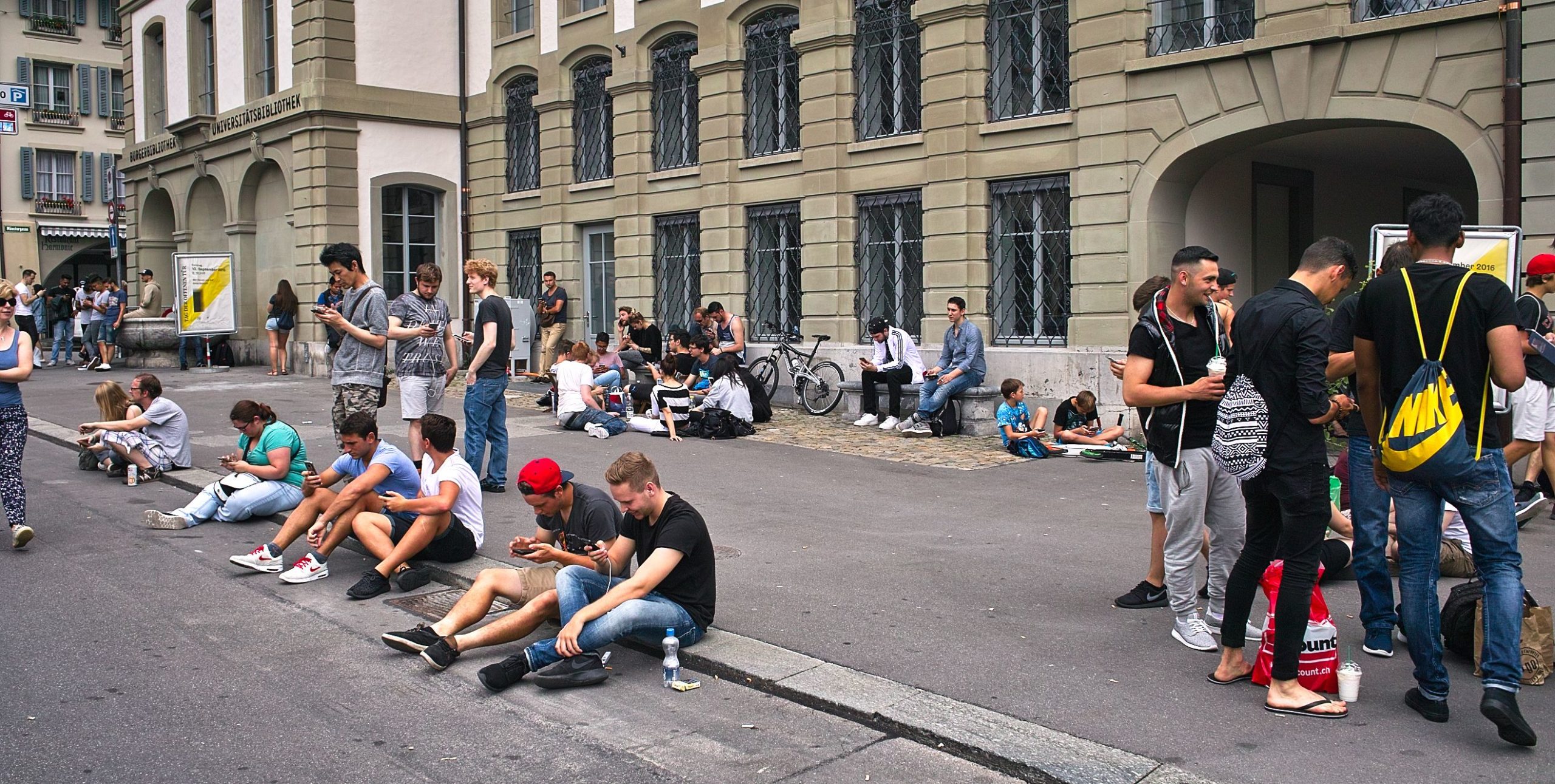 It is quite obvious that a person can get in trouble for physically entering a space he/she is not supposed to enter. This delict is called trespassing and is covered by criminal law worldwide. As a property owner I have the ‘natural right’ to control things physically intruding my property. This right is mostly decodes from constitutional guarantee of property and thus seen as ‘natural right’.

But how far does this guarantee reach? While the ground itself is an obvious part of a property the prevailing opinion in legal science also includes the ‘air column’ above the owned ground. Properties are then often safe-guarded by fences or doors on ground level. The ownership of the ‘air-column’ allows owners to prevent others from building above their house.

Now that we have physical ownership covered we should ask ourselves: Who owns the digital layers of spatial information hovering over my property? Do these digital layers in public also belong to the public domain and are free for everyone to use? Or can they be claimed as a part of the property rights guaranteed to the owner? Or is an overlaying digital property owned by the provider?

Technically this space should belong to the entity providing the digital information. But as soon as this information is spatially bound to a location (p. E. my property) it triggers other mechanisms. Imagine a super rare Pokémon summoning in you backyard and thousands of digital pilgrims physically enter your backyard to hunt it down.

If you want to fight the symptom you’ll tell everybody to leave. But how can you get rid of the cause? You somehow need to be able to control the digital content trespassing your property! Since platform providers tend to have deliberate control of their content, it should be possible to make this happen.

However, a solution has to be found to help property owners to control their property against the virtual use of a building that has ‘real world’ consequences. Sticking with our example: By motivating hordes of Pokémon Go players to access their buildings. 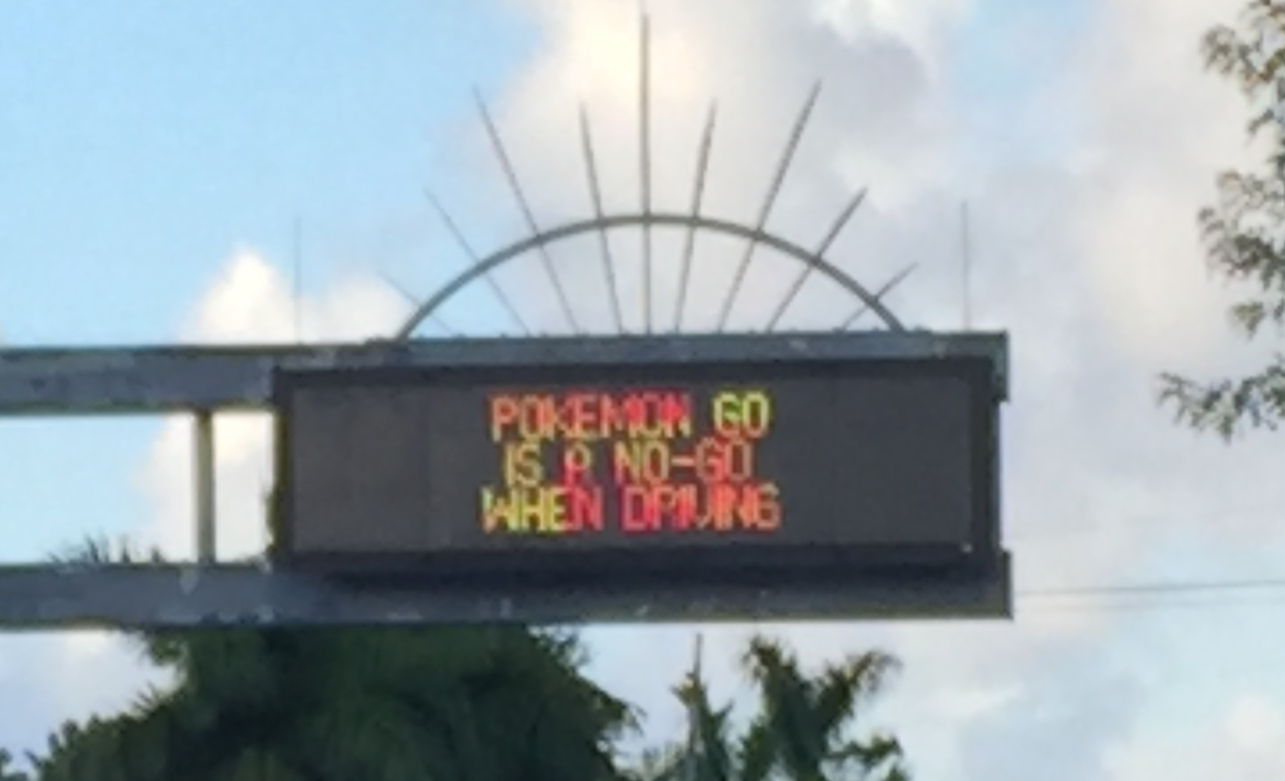 Hunting Pokémon on the go!
Traffic Board in Florida warns users to take care!
Photo by: Cyclonebiskit, CC-BY-SA 4.0

The recommendation to safeguard the property through doors, locks and fences is just as simple as unsatisfactory for the building owner: No one wants to have a crowd of people at the front gate that tries to open doors or find alternative ways to access the property. Even public property owners (e.g. churches, public spaces or buildings), that thus might not want fences or restrictions installed, can have a legitimate interest to exclude Pokemon Go players from their property – maybe because they are blocking the road like in Düsseldorf.

Looking into the dusty archives of non-digital German-Prussian law we’ve found a fruitful thought that might be transferable to this cyber-real question. Back then the principle was coined as “Zweckveranlasser” (“Purpose initiator”): According to this legal principle, someone whose behavior creates risks for third parties by motivating others to impair someone else’s goods, has the duty to cease and desist from this behavior.

This principle was developed more than a hundred years ago, where Pokémon were still caught in a vortex of complete chaos and nothingness. It was a quite curious case from today’s point of view: A retailer put mannequins into his shop window that were not yet dressed up. In the pre-Internet era this led to a grouping of promenaders in front of the shop window that blocked the pedestrian walkway. The prussian police showed up at the scene and demanded the retailer to dress his mannequins properly hence they considered him a ‘Zweckveranlasser’.

This over 100 year old principle can be transferred to the virtual use of property: If the use of virtual location based content – which is legitimate on its own – sets the ground for third parties to use a given property in real world in a illegitimate manner, the property owner should be able to claim cease and desist from the provider of the digital content. This could end up in a Pokémon free apartment on my end.

In a world where smartphones are a ubiquity, virtual reality is simply another layer covering our real life. Simply following trends like Internet of Things location based information and content is becoming more and more relevant.

Google Street View has been mentioned above. 4square has already conquered many parts of digital/physical space. Snapchat recently introduced geo-snaps. The outburst of Pokémon GO was only a natural evolution of leveraging mechanisms of location based content. It will be important for us, as a more and more digitizing society, to find a framework where these technologies can prove as a benefit

And yet again as long as I don’t find any left-overs of Pokémon ravaging through my apartment when I’m not there, it can’t be too much of an issue. Unless I meet Morpheus tomorrow asking me to choose between the blue pill and the red one…

Raphael is a digital geographer and urbanaut tracing the spatial patterns we leave behind working at moovel lab. During his studies he learned about the manifold of disciplines working on topics related to urban surroundings. Questions about how our mobility behaviour shapes the cities we live in, and how these phenomenons can be communicated through spatial data, prototypes and experiments are what keeps Raphael’s motivation running.

Robert is a corporate lawyer and former McKinsey consultant, specialised in all IT and startup related legal matters. He finished his law education as a DFG scholar with a Ph.d exploring the legal conflicts between copyright law and modern search engine services that make use of protected material. Tired of travelling around the globe, Robert quit McKinsey to finish his bar exam. Right after, he became General Counsel of moovel Group and is now sitting at the only desk at moovel HQ that is equipped with paper books.

Say thanks for this article (0)
Moovel Lab
1 posts
Want to be an author?
The community is supported by:

Maps have been in the tech radar for a while now – thanks to the interest in Autonomous cars. Earlier this year, it was rumoured that Microsoft and Amazon were both interested in investing in HERE in order to protect their cloud services business and it looks like those rumours might be settled pretty soon.

Edzard Overbeek, the CEO of HERE told Recode earlier last week they are looking to add new investors by the end of this year (Recode article).

“It’s some really big names,” Here chief Edzard Overbeek said in his first U.S. interview since joining the company in March. “My focus is to get this to closure by the end of this calendar year,”

Overbeek, a former Cisco executive, said he has been traveling the globe meeting with current and prospective Here customers to see who might be right to take a stake in the company. “It’s not just financial investment we are looking for,” he said – Recode article

The names mentioned in the recode article – Microsoft, Amazon, Facebook have been rumoured to be interested in HERE since 2015/16. Its clear what the ambitions and interests of Microsoft and Amazon are, to a certain extent. On the other hand, Facebook’s interest in HERE and its maps are perhaps the most interesting. Facebook has been using HERE’s maps in its apps for a while now and has been aggressively marketing its iBeacons platforms to retail outlets. It would be interesting to see if Facebook does indeed invest in HERE. We just have to wait a little longer 🙂