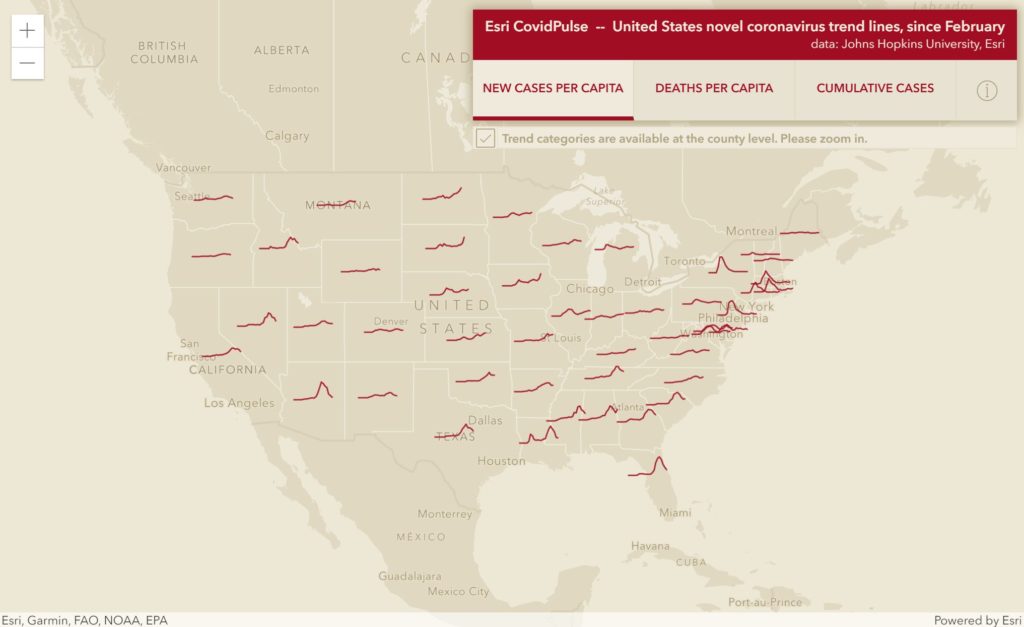 I assume that most of you already seen the real-time Esri COVID map, which is without doubts a very useful tool followed by millions. Earlier this week Esri published a new map called Covid Pulse that is one of the greatest examples of data visualization that I’ve seen for a while.

The map illustrates daily cases, mortality, and cumulative cases per state and country in a way that makes it clear and informative. The temporal data are represented as three day-over-day sparklines. The data has been normalized to per capita values to make the comparison of states and counties even possible.

When you click on a trend line you get additional details regarding particular state and country with longer timestamps looking back to February 2020. 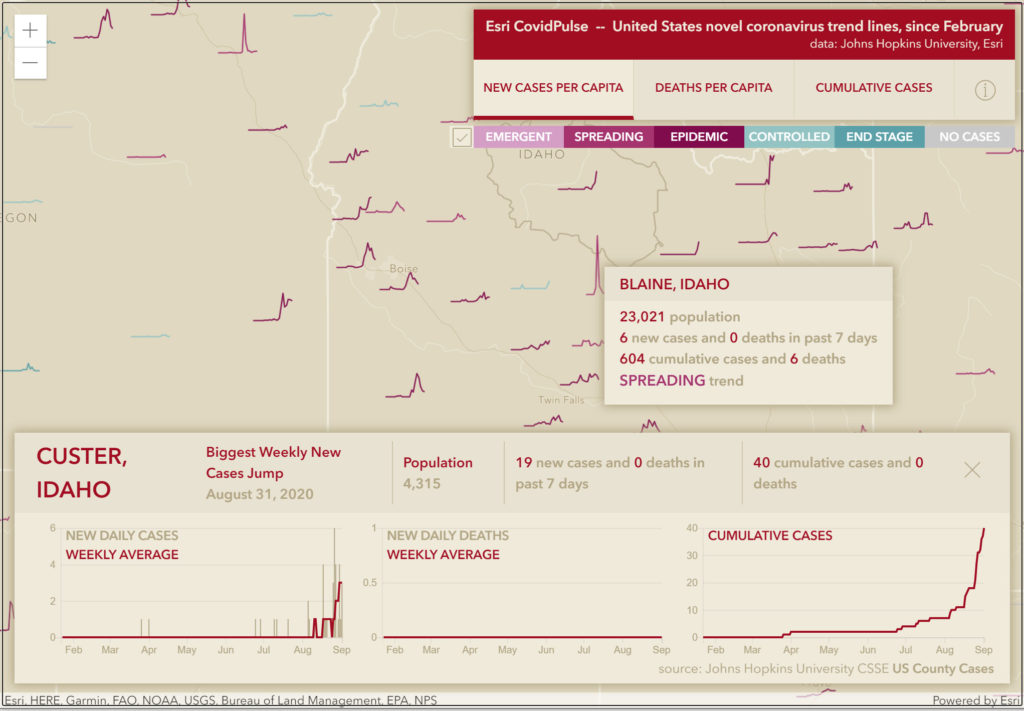 The map has been created by Jinnan Zhang and John Nelson (who’s maps we’ve been covering on Geoawesomeness a few times), of Esri, based on the data from Johns Hopkins University CSSE feature service of daily US County Cases since February 22, 2020,

Covid19 lockdown forced retail stores to close in order to avoid contagion. As a direct consequence, many of them did not reopen. Many of them reopened, but will close soon as an effect of the social distancing rules. EIXOS Economic Observatory has developed a model to measure the impact on retail in geographic terms. This model has been combined with an other developed by a research team at Massachusetts Institute of Technology (MIT).

The combined EIXOS / MIT model assigns a specific risk of closure  for each economic activity category. It evaluates complementary aspects, such as contagion probability or business financial stress derived from the situation. The MIT & EIXOS values are pondered in order to obtain a final risk value. Then, this value is graduated by an impact coefficient (low, average, high). Finally, the risk is expressed as a percentage of business closures:

Risk of Closure by Category

In order to evaluate the impact of covid19 lockdown & social distancing rules on London retail,  all the retail stores in a 500 km2 area were mapped,  that includes more than 60,000 retail spaces and 15 boroughs  in it, at both sides of Thames.

According to our risk assessment model, the impact on London economic activities will be high, even in the more optimistic hypotheses.

Almost between a third and more than a half of London small businesses could close as a consequence of covid19 impact. From those, hotels & restaurants are the activities that will take the highest loss.

London Urban Model: Retail in a Road in a Garden City

Retail stores align along the main streets, interurban roads. That’s what we call the “retail in a road” alignment.

Occupancy, a key aspect to monitorize retail health, is specially critical in this highly-optimized model.

Less than 90% occupancy scenarios are to avoid. Less than 80% are catastrophic. 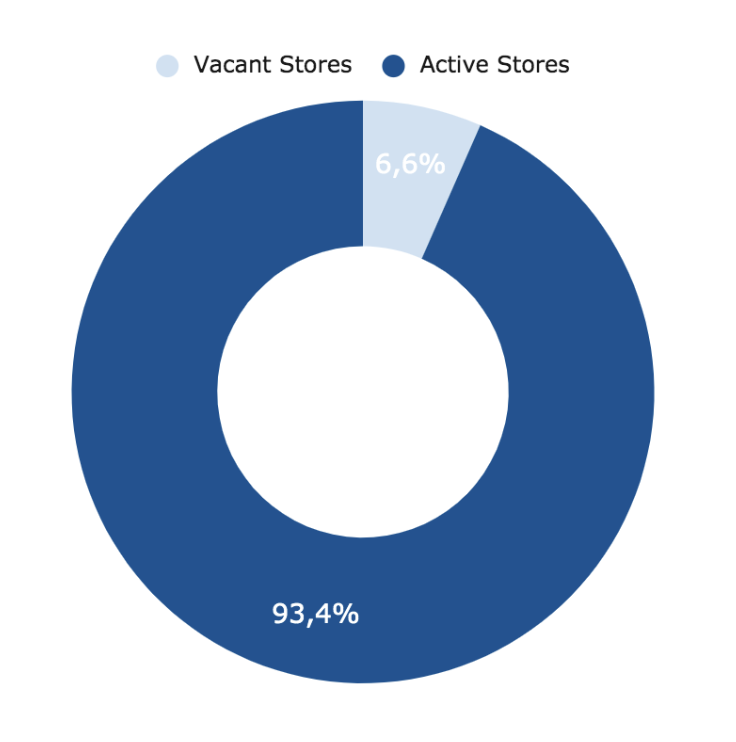 According to the EIXOS / MIT model, in a low impact hypothesis the average retail occupancy drops down to 70%.

Any retail recovery strategy must set the focus on protecting the vital areas. This implies guaranteeing the minimum viable commercial service all over the city.

Such a goal requires a great coordinated effort amongst all the stakeholders that have a key role in retail. Consumers, retailers, real estate agents, landlords, economic development agencies, business improvement districts do have a say in the new retail scenarios to come.

All efforts & resources must be put on preserving the key retail areas that are at risk. Specific 0,33 km2 hexagons identify those areas in a very precise way. In our full version report we provide a very accurate map of them.

We also propose a radical recovery strategy, based on regrouping the stores in order to hold the lines. It is what we call Retail Grid Optimization.

Basically, it consists of recombining the existing retail stores. The goal is to find the most optimal combination, in terms of commercial service to the city.

It could sound like a crazy solution, for it implies a lot of combined efforts. However, post-covid19 scenario will make it a reasonable one.

Proceedings of the National Academy of Sciences of the United States of America: Rationing social contact during the COVID-19 pandemic: Transmission risk and social benefits of US locations

MIT News: “Which businesses should be open?”