How the new drone regulations will influence the skies?

As it is described in another article, FAA (Federal Aviation Administration) recently enforced mandatory registration of drones for all drone owners. Everyone is bound to register a drone or else you have to pay a fine. This law however, was not a surprise. FAA tried to enforce similar law few years ago and they also had a goal to enforce registration before the end of 2015. Many drone enthusiasts and people in the industry were against that.

The main reason that a new law was enforced is safety. There are a lot of individual drone owners who fly in forbidden areas and that fly dangerously. Flying dangerously is a problem if you pose threat to other people. Many new flyers are not experienced and then they fly drones in towns. Further concern is that drones in the sky interfere with other flying vehicles. Although it is already forbidden to fly in some areas where accidents might happen, many drone operators still do that. And regulators hope that with registration it will be easier to track them and also it will discourage them to fly in such areas. Security is the main concern of the regulators.

The other concerns are privacy concerns. When a person makes a footage, it can post it online without any restriction as long as it does not earn money with it. In case it earns money with the video or photography, it needs the consent of the owners of the land that was on the video/photo or of the people who are featured. Here there are still many gray areas of the law. With drone registrations they hope that amount of footage that is released in the public will be smaller.

Drones are very useful because you can fly them in the places that are otherwise unreachable or it is very hard to make footage from there. Alternative to aerial footage with quadcopter is usually footage made by helicopter. But helicopter has its minuses. It is expensive, big, loud and therefore it is hard to reach certain spots with it. So drones are great because they can reach almost any spot. However, the danger is that the pilot will not fly well (since there are no licenses for drone flying) or that it will hit a plane or helicopter or some other flying object. To eliminate that, drone flyers must follow the following rules (it was like that already before the registration was mandatory).

There are also other areas to avoid besides those already listed above. It is forbidden to fly in national parks, military zones and special areas which are marked by the government.  There is a whole map where you can and cannot fly available here. Besides listed rules, it is necessary to use also common sense about what you can or cannot do with drones when you are flying.

Drones must fly away from other aircrafts. On the picture: Drone under the airplane. 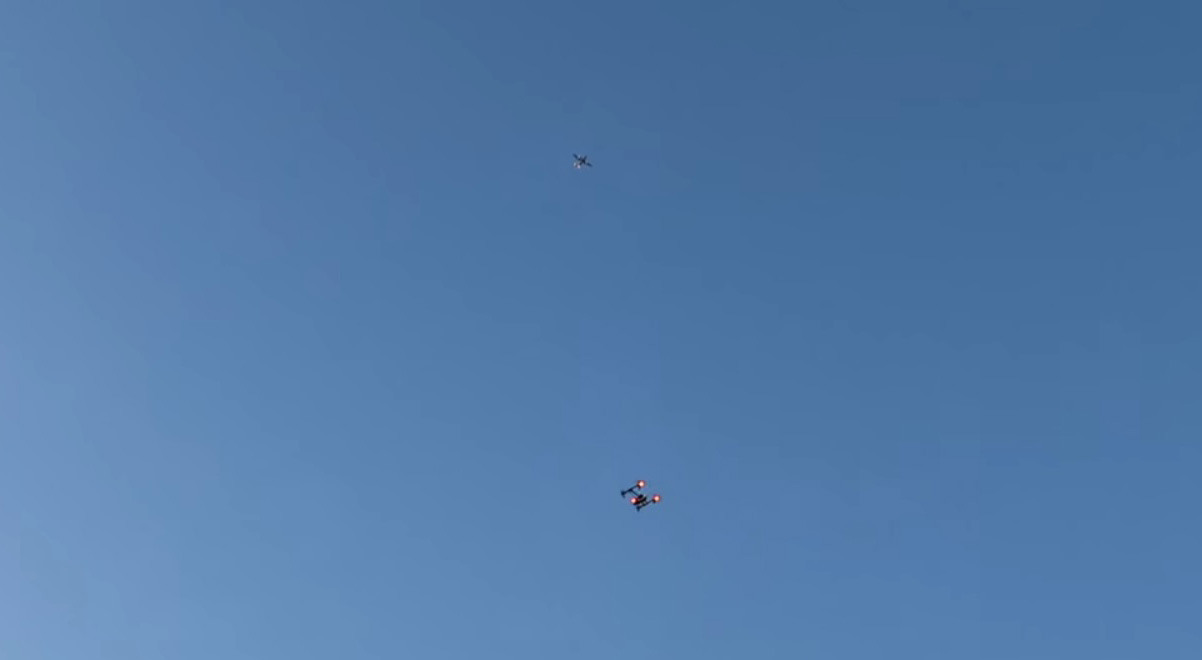 Who will be hit with the drone law?

The question regarding the law is if it will harm anyone. To aerial photographers and videographers that are trying to get some special footage, it should not make a difference as long as they do it on a legal way. There were many photographers who often flew drones in national parks without the allowance of the proper authorities. Those will be now discouraged. Most drone enthusiasts will probably also find no problems with registering. Registrations must be done after the purchase. So some people might be lazy and will not go and register a drone in case they do not think they will get their drone inspected. FAA decided to ask people to register it and it did not give an option to register a drone at the moment of purchase. The only one who might actually get hit are drone sellers and manufacturers because their sales might decrease. However the true effect of the new law on the sales of drones is hard to determine.

Other ways how they might regulate in the future

Drone industry will get even more regulated. That is because the industry is growing and there are more drone users every day. So the safety concerns will be even bigger. Currently the laws are not that strict because not many people are flying drones, it is hard to learn to fly them and in general many people just do not know about them yet. However, these things are changing with new models which suit the final customer better. With this, more people who are not experienced are using drones for their applications. There are also more accidents every day as well as lawsuits. Those things are leading the regulators to make the rules clearer. Small industry can be self-regulated; but big one cannot.

What is the future of drones? 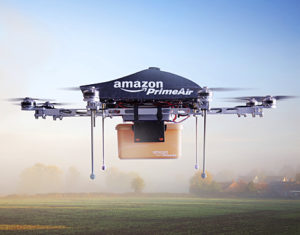 The future of the drones and drone usage is vague. Some people believe that the government rules will get stricter and that those rules will reduce the drone usage. The government might also see a threat to security in drones since they are flying objects with which you can do literally anything.

But some people also say that the industry will expand and that drones might be the new industrial revolution. Although this might be exaggerated, drones could play a more important role in our future. Besides personal usage, also film makers, marketers and journalists are using them nowadays. Government and shops are also finding them useful – government for control and for various operations (firemen sometimes use them) and shops for delivery. 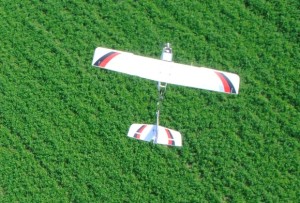 There are two other branches of drones. Agriculture drones, used for agriculture are also gaining popularity. And here are also military drones, which are more evolved than commercial ones and are used in military operations where they replace humans. That is certainly a useful thing for military as this reduces casualties. But there is a fear which I already described – that military technology might be transferred to commercial drones. That might kill the whole commercial drone usage.

Credits for this article go to Thomas Foster, a quadcopter enthusiast and an owner of the website that compares quadcopters and features various guides. He is also an observer of changes in drone industry. You can follow him on Twitter.

Say thanks for this article (0)
Thomas Foster
1 posts
Want to be an author?
The community is supported by

How to make awesome map questionnaire in 10 steps?

Maptionnaire is a platform from a Finnish start-up for quick and easy creation of map-based questionnaires. It takes just a couple of minutes and the effects are really cool. We’ll show you how to make it in 10 simple steps.

We will cover the demo questionnaire available online once you register on the Maptionnaire website. You can also check it out on the picture below. 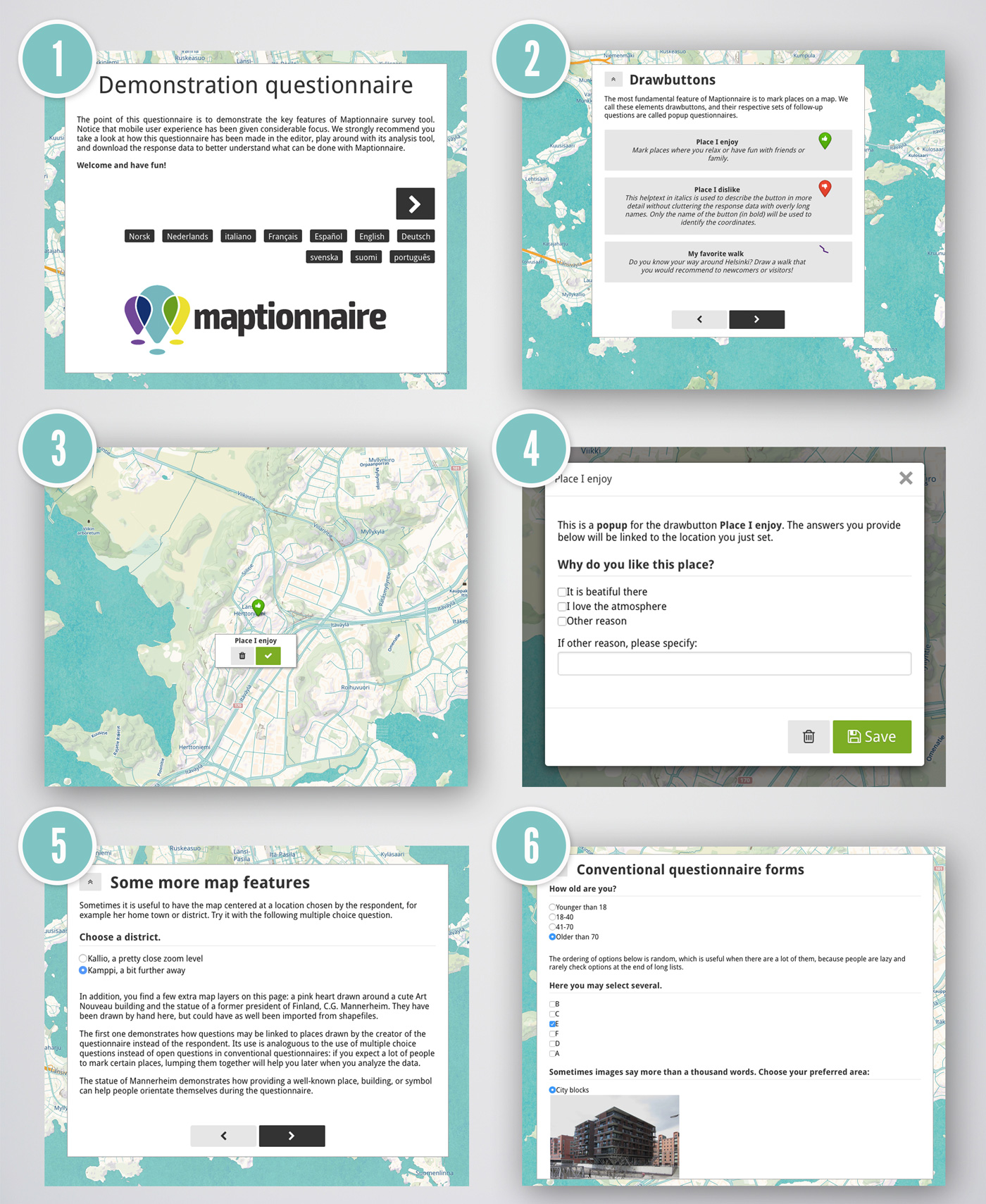 This is where you define your questionnaire. While doing so, you’ve automatically created a landing page for your project.

Just below you can define on the map your default area for the questionnaire. 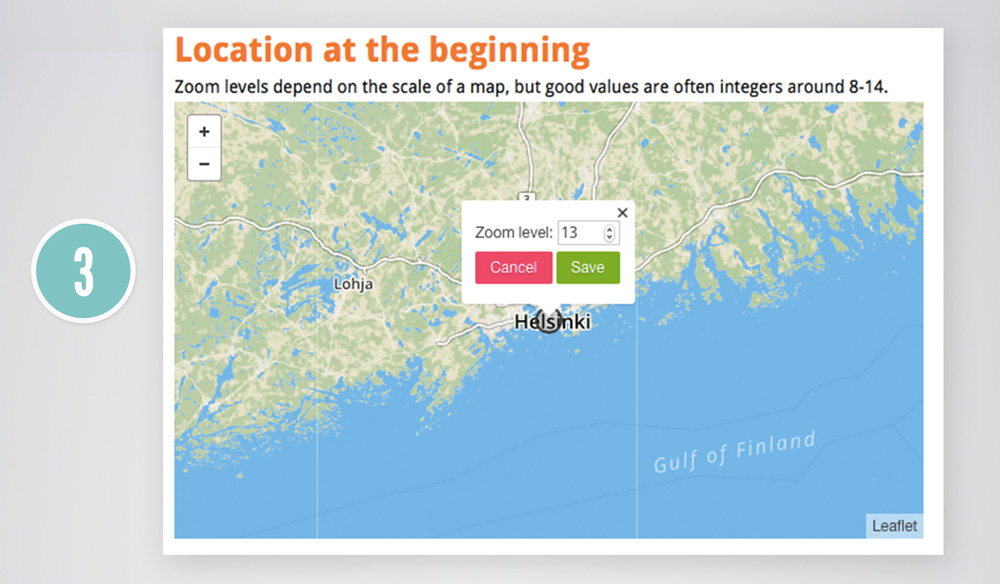 Now you’re ready to create your first questionnaire page by selecting a “+” button.

One of the key benefits of using a Maptionnaire compared to other solutions is that you can ask respondents to mark on a map particular locations, routes or areas. You just have to select “Drawbuttons” option when creating a page. 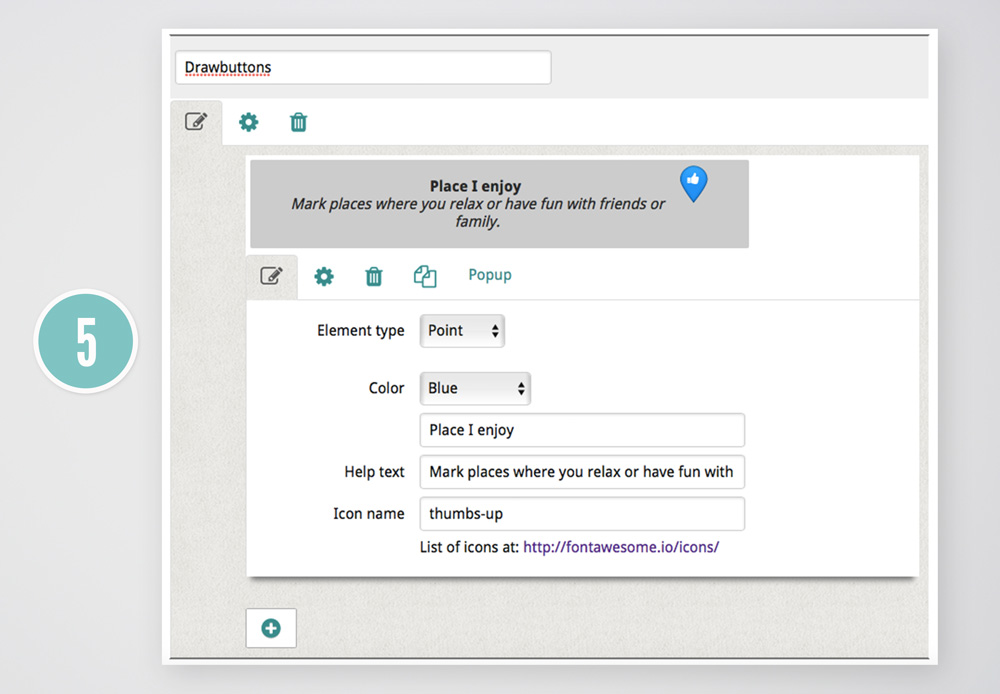 6. ADD POP-UPS TO GET ADDITIONAL INFORMATION

In the previous step, you gave your responders an opportunity to draw a point, line or polygon to mark a particular location, route or area on the map. In most cases, you’d like to get some additional feedback about why the user selected that particular place. Maptionnaire offers a tool which allows you to do that by setting up a pop-up window which will appear after the user drew the geometry. 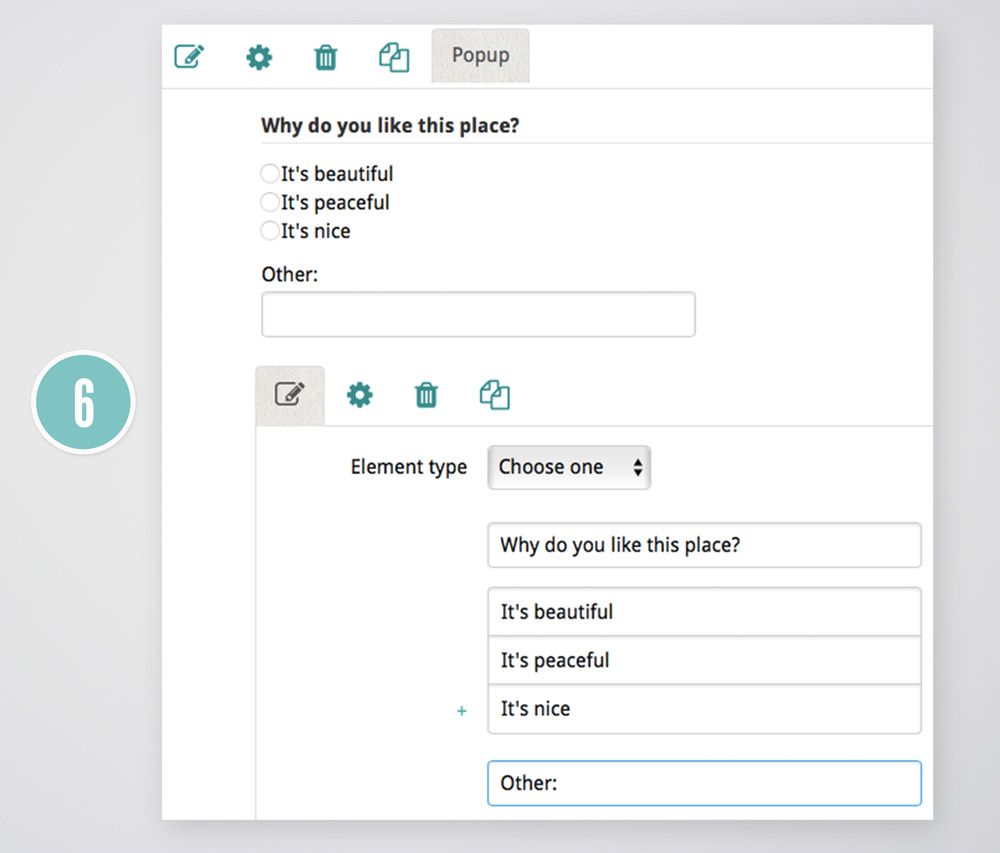 Another cool feature allows you to define map zoom for each answer. In order to do it, add a new page, as you did in step 3 and choose “a multiple-choice” type of a question. 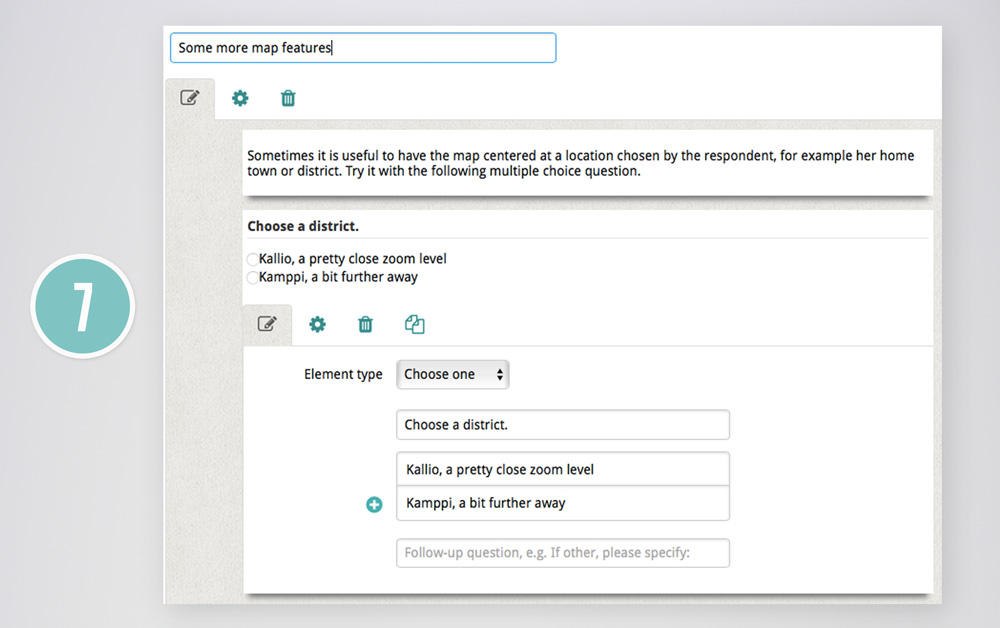 Once you have questions set up, you can go to “Settings” tab and define a zoom of each answer of your multiple-choice question. 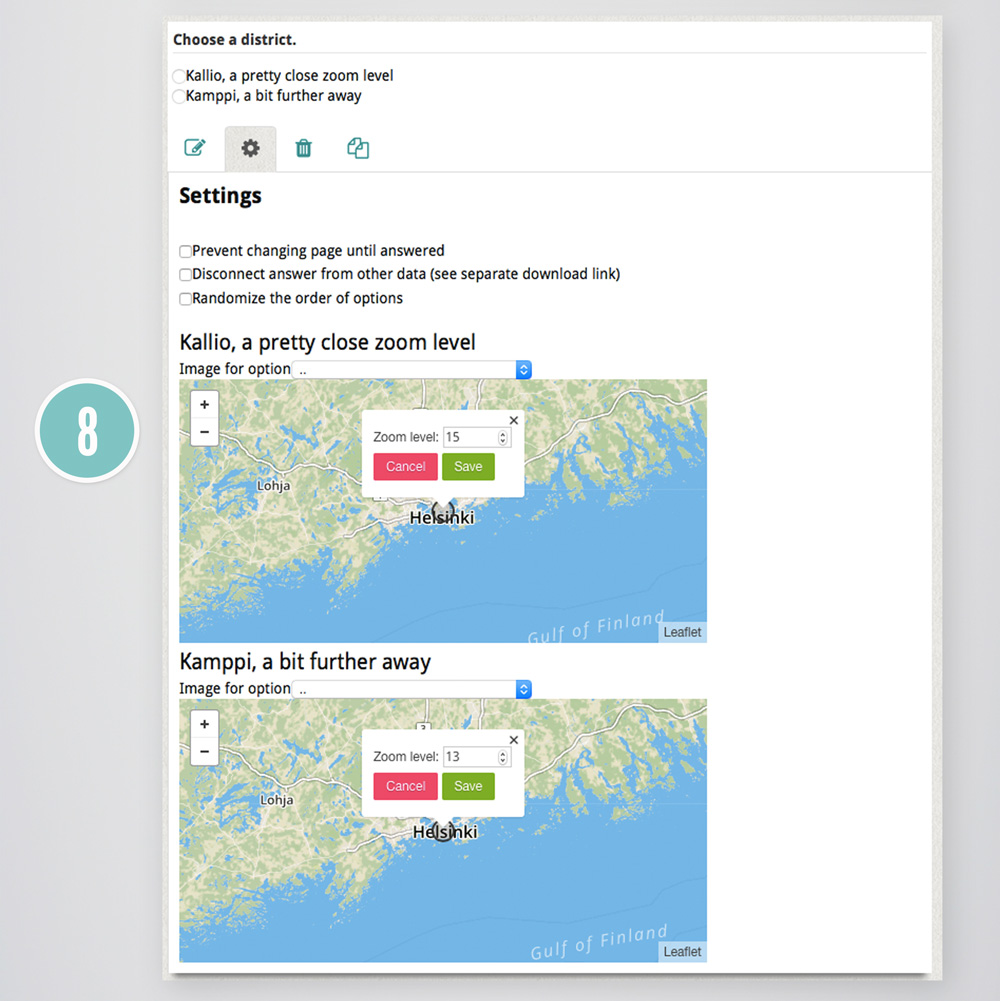 9. ADD TRADITIONAL QUESTIONS TO YOUR QUESTIONNAIRE

Maptionnaire is as much about maps as it is about questionnaires. That’s why you can also add multiple types of “traditional” questions. 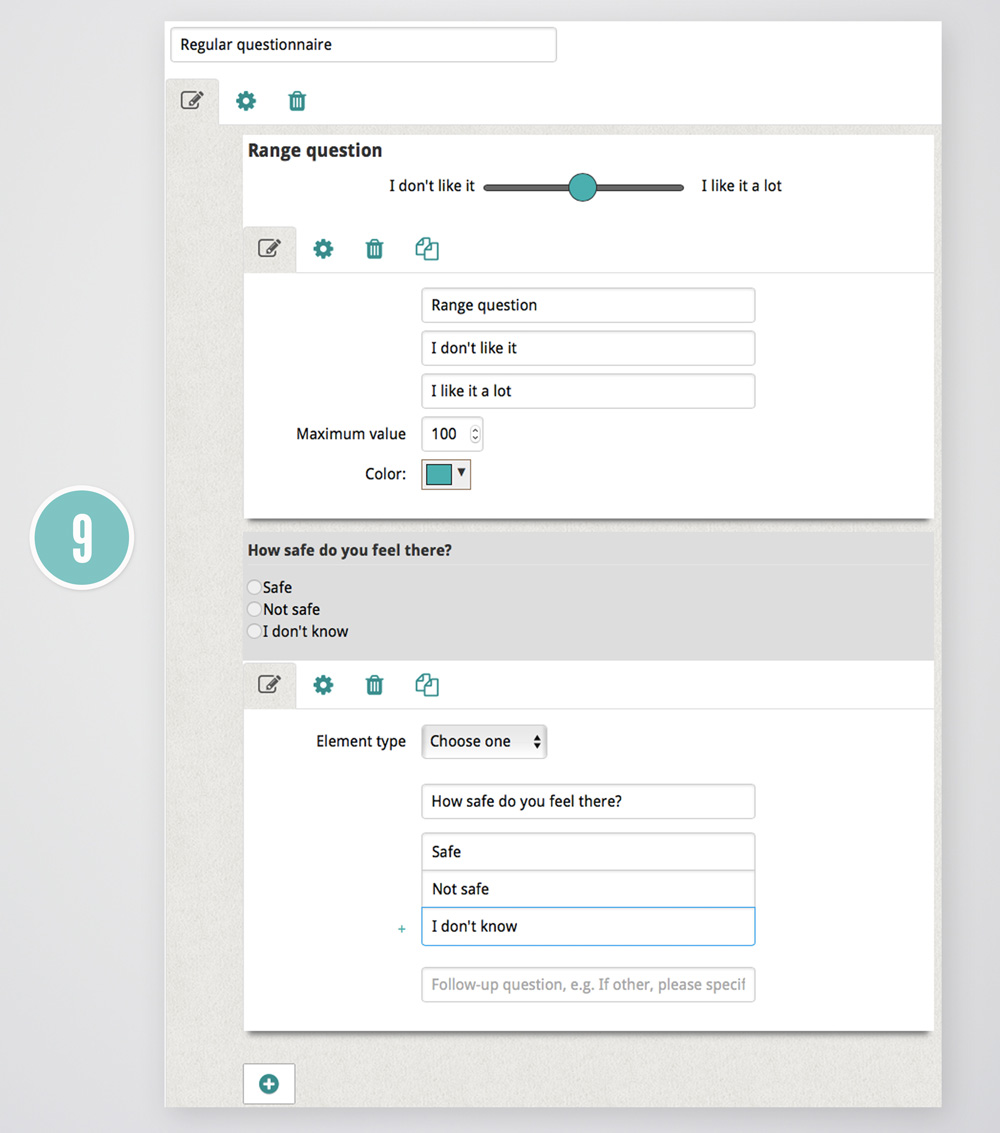 Now you don’t need to publish anything. Your questionnaire is automatically saved and ready to be shared with the world via its unique URL.