Meet Awesome Maps – the startup that is bringing the awesome back to maps! #TheNextGeo

In an age where maps are almost always digital and are designed to highlight places of interest rather than to look like a work of art, it is hard to find maps that stand out and remind us of the awesomeness of cartography. So naturally when you read about a startup called Awesome Maps with the tagline “Awesome Maps has been helping globetrotters see the world differently since 2010“, you want to check out their maps and see what all the buzz is about and honestly, they exceed all your expectations 🙂 I spoke to Simon and Katharina to learn more about Awesome Maps and their vision! Read on.

all the awesome maps

Q: In an age where there is an app for everything and maps are almost always digital, what motivated you to start awesome maps? What is really interesting is that awesome maps isn’t a passion project, it is actually what you and your team work on full time!

A: A few years ago, I’d been on a surf trip through Europe, and wanted to pin down all the places I’d surfed as a memento of the trip. I soon realized a political world map is really boring for that, so I decided to make an illustrated world map for surfing. While researching I learnt so much, like that there is actually great surf in Oman! That had to be included, so we decided to add all sorts of different surf spots and information. When the map was completed, it had become not just something to record all the places you’d been, but also something inspirational- a map where you can see all the regions with good surf on the planet. Surf where you’d never expect it, like Oman. The purpose of our maps isn’t to give you instructions on how to get there, because we have google maps for that and digital really is the best way to do this. However, having all this surfing information at one glance in a physical product is magical. You can explore where you want to go, pin where you’ve been and it’s just a constant reminder of the beautiful world that is out there.

So what started as a passion project to solve my own problem became something that inspired others. Once we started, people kept asking for other maps and themes and so we grew slowly but constantly and are now a “real” company with the mission to inspire people to explore the world around them.

A: The first map was actually the Surftrip Map, which was released in 2010. Other than that, the beard has grown longer and we have released about 20 maps! We are always looking for inspiration and our community is the best source. People who buy our maps are very passionate about exploring and their hobbies and usually come up with the best ideas. That’s how, for example, the Kitesurf Map was born, and we are currently working on some really cool activity maps – one is about hiking.

Q: Designing an hand-drawn map isn’t easy and certainly involves a ton of work. Could you walk us through your design process? How long does it take before the map is ready to be shown to the outside world?

A: We have long discussions every year deciding what to work on. We speak to our community as well as looking at certain factors that give us an indication of whether there is enough of a market. 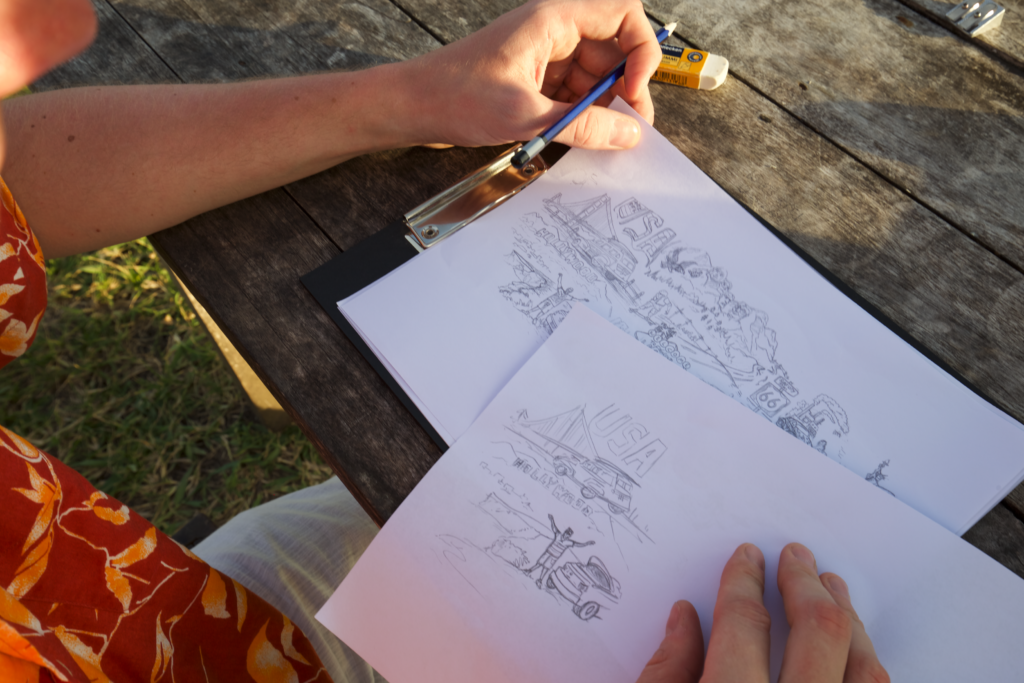 Hand drawn maps are always a work of art!

Then if the map is about something we don’t personally have experience with, we talk to people who do. For the diving map, we took some scuba diving classes to get a basic understanding of what it is that makes divers tick. We spoke to as many divers as possible and reached out to our community to find divers who could help research the map. The information needs to be very condensed, and making a map full of illustrations and information is actually more about saying ‘no’ than it is about saying ‘yes’.

While the research is getting done, we find an illustrator who gets started on the illustrations.

Once everything is done, we assemble the map, marry the artwork with the information, double check the facts one last time, and off it goes to the printer! The whole process takes at least 6 months per map.

A: We were, in fact, debating whether to make a map of mythical creatures! This year it didn’t make the cut, but it’s a hot contender for next year.

Q: I have had an awesome map in my room for many years now and I absolutely love it. But what’s with the obsession with the Mercator projection? What do other projections have to do to get some awesome maps love 😉

Actually, the copper map is a mix of the Mercator and Robinson Projection. We use the Mercator Projection (we have actually tweaked it a little in the very North) because it’s a very balanced projection in terms of proportions, and that really helps when filling the map with illustrations. Imagine the tiny illustrations we could accommodate in Europe if we were using the Peters Projection.

Q: You launched awesome maps thanks to a highly successful kickstarter campaign that raised over $56K in 2013. 27 maps and 5 years later, what comes next for awesome maps?

A: We launched Awesome Maps (branded back then as simply Surftrip Map) in 2010 but the Kickstarter campaign really helped us gain some recognition. We are still passionate about inspiring people to explore the world and still have a long list of maps we want to do. We really enjoy the process so expect more maps to come!

Q: As a startup founder, I am sure that there are many things that you must have learnt along the way. What was the most interesting feedback that you received so far?

A: The most important thing I’ve learnt is that you cannot achieve anything on your own. Finding the right people and keeping them close is incredibly important.

Q: You are based in Berlin. How’s the geo-startup scene there?

A: We feel like a unicorn in Berlin’s startup environment. Not in terms of valuation but in terms of being exotic. I always have to explain that we make physical products and it has people in disbelief! That being said, there are a ton of really cool tech startups concerned with mapping.

Q: Do you accept requests for custom designed maps? Just asking for a friend 😉

A: At this point, we don’t – but maybe a custom map builder will be released at some point. That would also make us a tech company in some way 🙂

Q: Any closing remarks for anyone looking to start their own geo startup?

A: This goes for any start-up. Find something you’re really passionate about and where you enjoy the process. You’ll need a blind eye for criticism otherwise you’ll never ship your product. And you need your passion and belief to keep going when you have setbacks- how can you inspire people to work with you if you weren’t be burning for what you’re doing?

The Next Geo is supported by Geovation:

Location is everywhere, and our mission is to expand its use in the UK’s innovation community. So we’re here to help you along your journey to success. Get on board and let’s start with your idea…

Learn more about Geovation and how they can help turn your idea into reality at geovation.uk

About The Next Geo

The Next Geo is all about discovering the people and companies that are changing the geospatial industry – unearthing their stories, discovering their products, understanding their business models and celebrating their success! You can read more about the series and the vision behind it here.

We know it takes a village, and so we are thrilled to have your feedback, suggestions, and any leads you think should be featured on The Next Geo! Share with us, and we’ll share it with the world! You can reach us at info@geoawesomeness.com or via social media 🙂

We have always maintained that DroneDeploy is one of the best mapping software out there. It’s the only drone mapping solution that lets you create drone maps in the field instantly. You don’t have to upload the images anywhere, or even have access to the Internet. The map gets stitched on your mobile screen in real time as the drone proceeds on its flight plan. If that wasn’t incredible enough, this week, DroneDeploy added another capability to its Live Map service – thermal imaging.

Thermal inspections are usually time-consuming; it takes hours or even days to collect and analyze the data. And traditionally undertaken by manned aircraft which can only access limited areas, thermal inspections have carried a pretty high price tag for the low-resolution data they typically yield.

DroneDeploy plans to change all that with its Thermal Live Map for iOS devices. By enabling industries like building, agriculture, solar, public safety, and roofing to see the unseen in real time, DroneDeploy is empowering organizations to make smarter business decisions even before their drone has hit the ground.

Must read: Step by step guide to complete your first drone mapping project

For example, identifying damaged solar panels in a solar farm would only take minutes – not days – with the help of this solution. Live thermal imagery can also be used to detect areas of plant stress in an agricultural field. Similarly, firefighters can use the Thermal Live Map to see through the smoke and track where victims are trapped in a large fire scene. 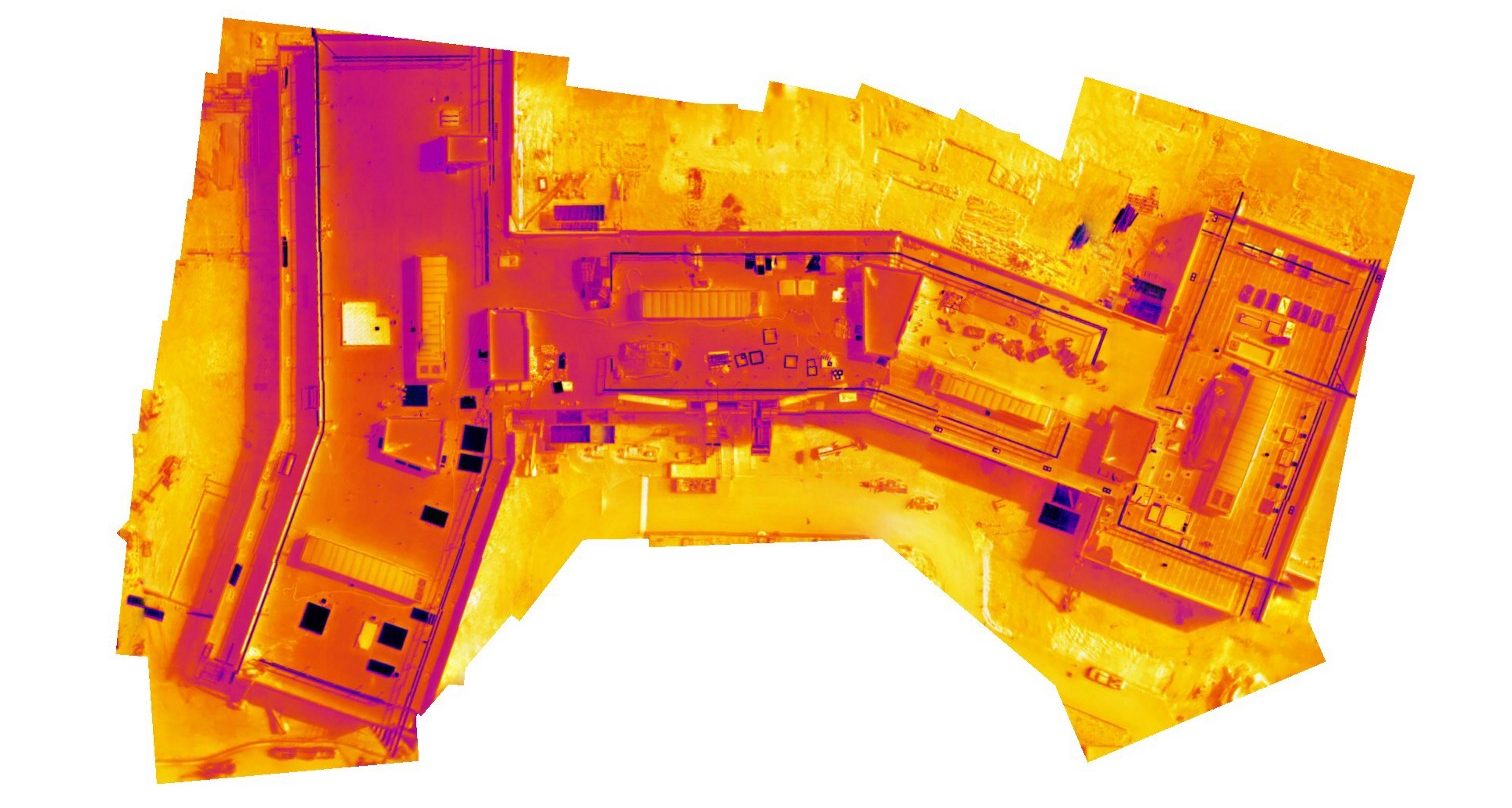 Another industry that would benefit greatly from this solution is construction. Not only is using drones for building and roof inspections much safer than sending a person to the site with a ladder, a real-time thermal map can pinpoint problems like cracks and leaks in a jiffy and minimize any danger to the workers. For Grant Hagen, Virtual Design and Construction Manager at The Beck Group, drone-based live thermal imaging is a game-changer. “Rather than searching for a needle in a haystack, you have a map to tell you right where to look,” Hagen sums up.dro