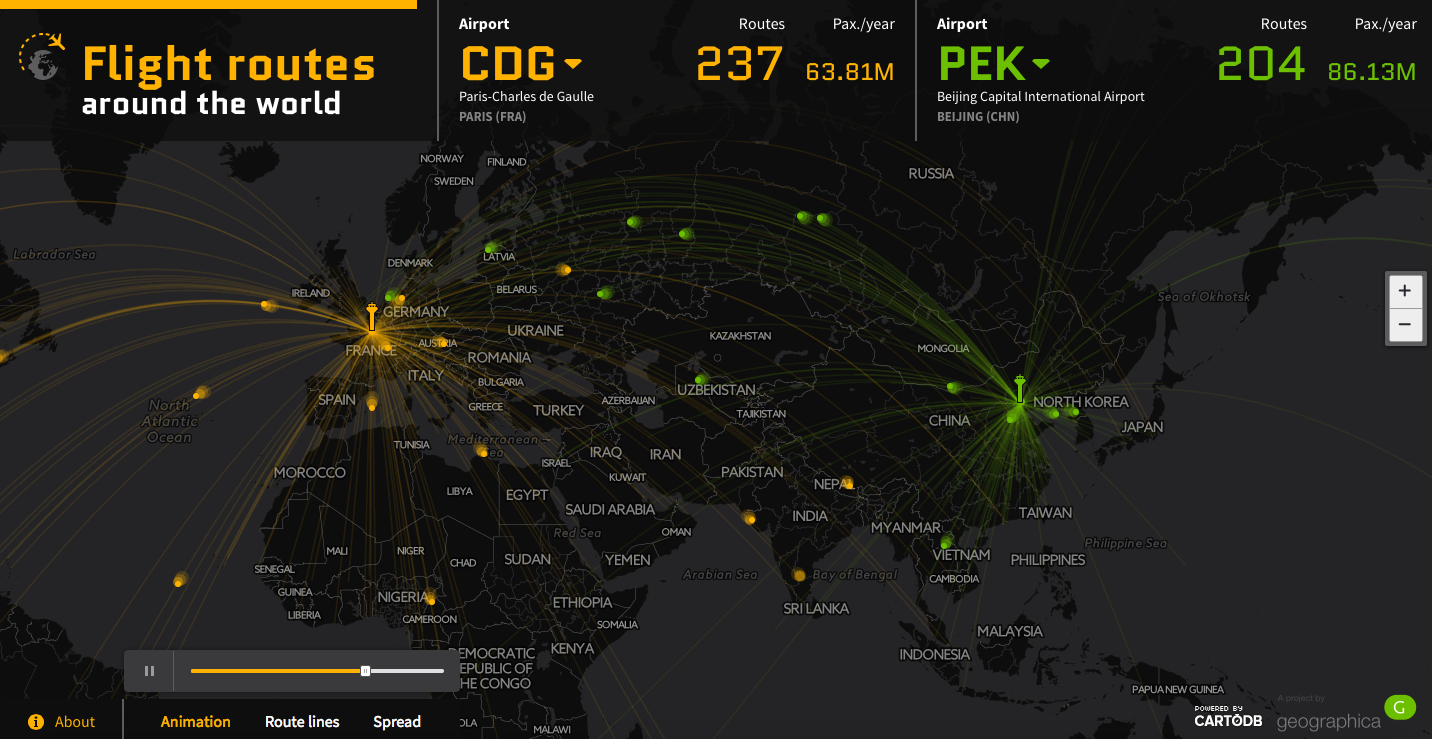 Awesome mapping project by Geographica a Spanish map design studio. The Flight Routes Around the World is an interactive map that visualises data about the world’s 50 busiest airports by passenger traffic.

For each airport you can visualise the number of routes and their destinations as well as the number of passengers per year. You can also compare two different airports by selecting them from a dropdown list in the top menu.

The map itself is based on CartoDB. The design is simple, clean and it does the job well. The code of the project avaiable on GitHub. The data comes from Wikipedia, OpenFlights.org and OurAirports.com.

What can I say. We wish more projects like that!

Twitter’s Golden Egg: Can Twitter do more with its location data?

Twitter is an amazing tool. It’s probably the most diverse (and fast-spaced) among all the social media out there! Off late, Twitter hasn’t been doing great at the stock exchange and needless to say, there were quite a few “Is Twitter Doomed”  articles discussing what twitter could do to stay alive. I’m one of those people who wouldn’t actually mind paying to use Twitter. But then again, that isn’t really Twitter’s problem – it’s getting new users to use the app and finding more ways to monetize its potential.

So what can twitter do better (with its location data) to improve the user experience and maybe make its ads more effective?

Back in 2011, TechCrunch ran an article titled “Twitter’s Golden Egg: Location” highlighting how much twitter could do with its location data in terms of location-based marketing – sending notifications when you enter the place, offering local deals, you know the whole nine yards.

It’s already possible to map all the (geotagged) tweets in the world (the most detailed Twitter map); to do cool visualisations and analysis of tweets using CartoDB’s Twitter Map tool.

Twitter did take a big step towards utilising the potential of its location data when it partnered with Foursquare early last year and hired a geo-lead – David Blackman, who  is currently the manager of twitter moments (Read more: Twitter-Foursquare partnership).

In spite of the partnership with Foursquare and the subsequent (and totally unrelated) roll out of Moments, clicking on a geo-tagged tweet’s location simply shows you something like this below – which is nothing more than a list of all the geotagged tweets from the same location! 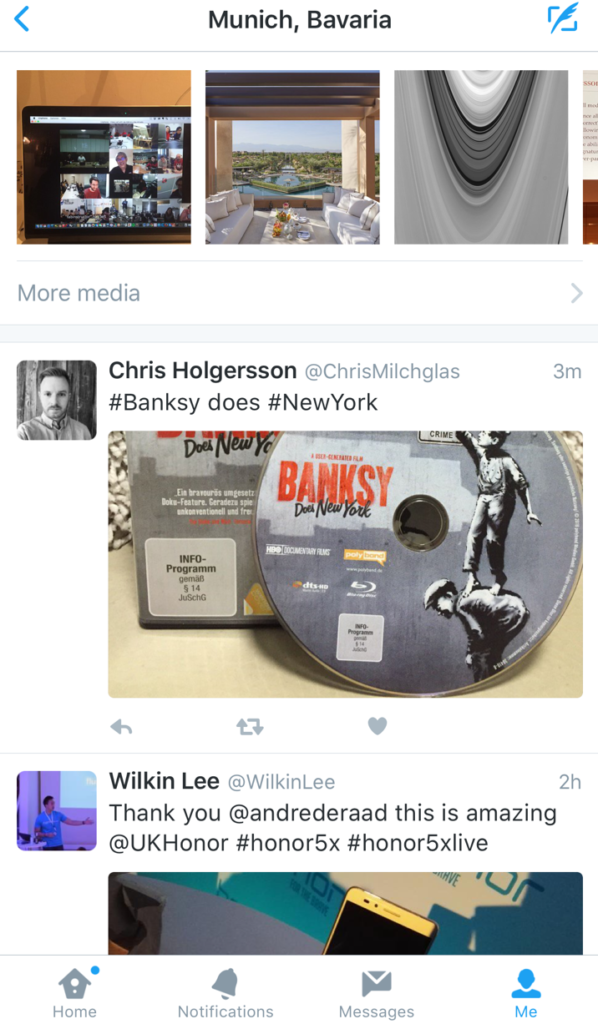 Take Twitter’s ad platform for e.g., there is a lot of different ways in which you can target your ads to your target audience but if you are looking for an way to promote your tweet when its exactly 08.00 hours across all the locations you select, there isn’t one! Forget that, even entering locations aren’t exactly as simple as they should be! Try getting an ad campaign targeting only the city of Munich, Germany. It simply doesn’t get the right city! 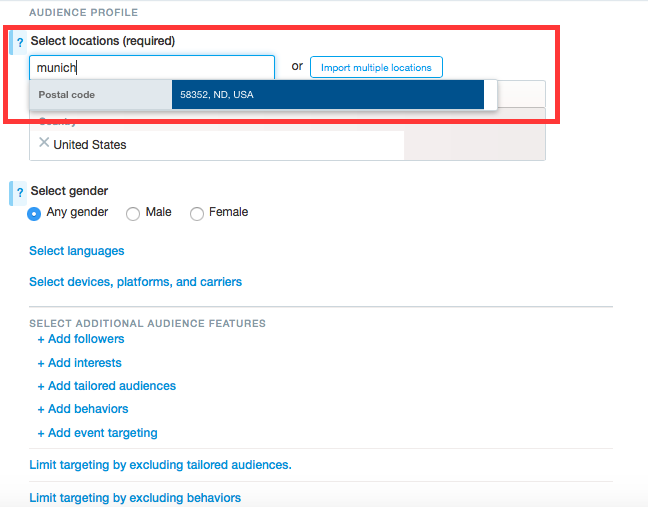 Location as a vehicle of discovery!

Twitter is a vehicle of discovery – whatever it is that one is looking to explore. Their Moments feature is a perfect example of discovery without the hassle of building a network and it would really interesting if Twitter realises the potential of using location for its Moments feature by allowing users to “follow” their location and stay updated about the latest happenings in their city. Sure there are a million other ways to do that, but we already on Twitter so why would one leave the app if you already get this information in the app based on all the data they have about the things you like. 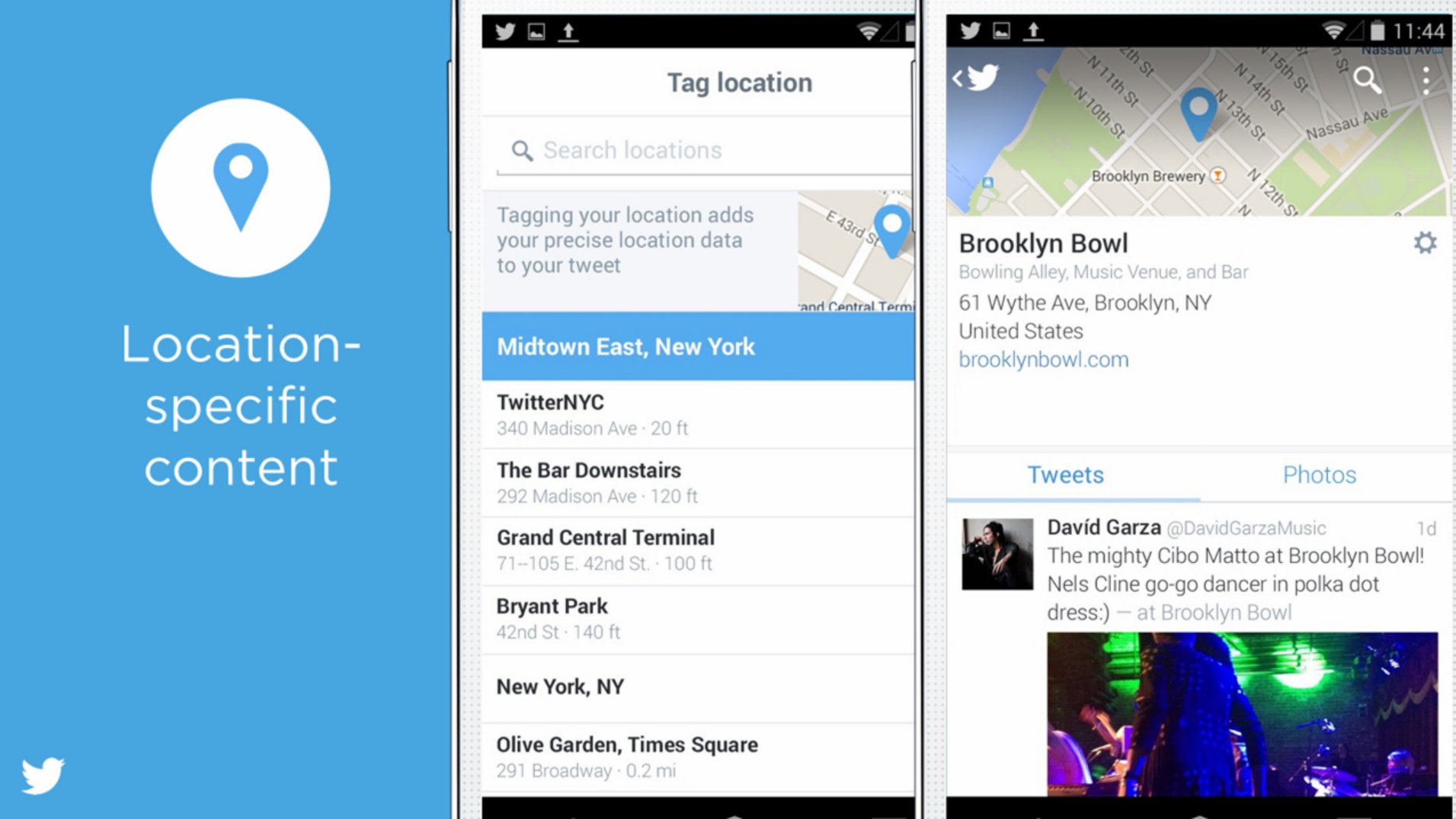 Twitter Moments based on a location and the ads platform are rather simple features that surprisingly aren’t available yet.

Location may not really be Twitter’s Golden egg anymore unlike the TechCrunch article from 2011 (Twitter’s Golden Egg: Location) but Location data is certainly something that twitter hasn’t really utilised as much as I wish they would have. However, with their partnership with Foursquare, they must have grander plans for using location data. Let’s just hope that do they do! #Twitter #Location

P.S: If you have any ideas as to how twitter can utilise location data, tweet them my way @muthukumarceg. Maybe even to twitter’s geo lead 😉