This map shows countries where people face persecution for their beliefs 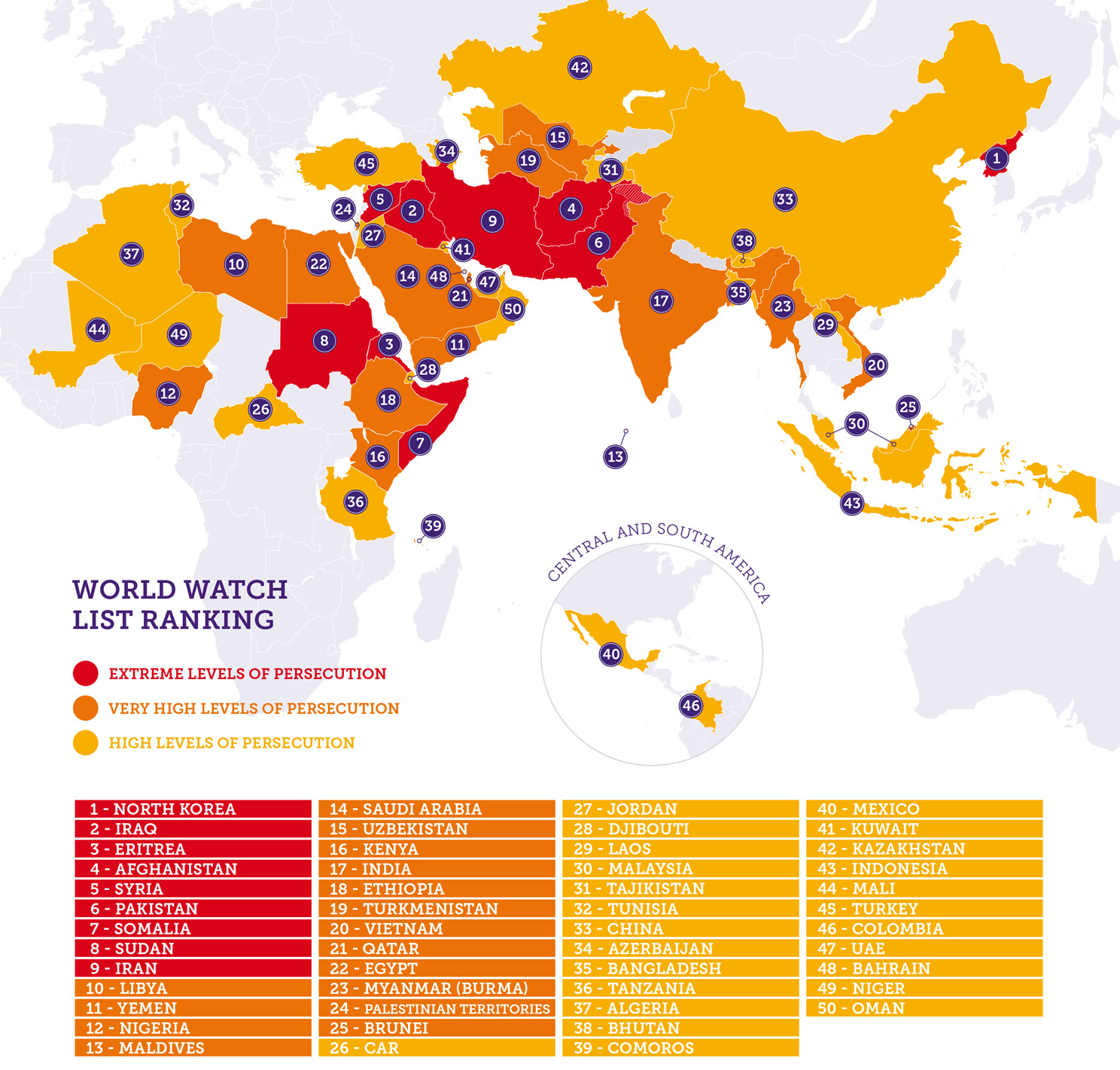 This topic will be difficult and challenging. I am aware that the subject of religion is not convenient for everyone but despite this, I believe that sharing information holds the greatest power for changes, especially when it comes to human rights and choices. It might be hard to believe that today, there are still places where Christians must keep their beliefs hidden and where living with gospel means facing beatings, imprisonment, discrimination, abuse and even death. Unfortunately, according to The Pew Research Center, over 70% of the world’s population lives in areas with severe religious restrictions.

Each year the organization called Open Door is issuing a report that ranks and maps the worst countries for Christians to live. It shows that due to the political situation and the emergence of ISIS, 2016 was the worst year for Christians for a long time! Islamic extremists are responsible for the oppression in 35 out of the 50 listed countries. Unfortunately this phenomenon is not limited to the Middle East.

With persecution rising in Bangladesh, Vietnam, and even Sri Lanka, Asia is a new center of concern. For the 14th year straight, North Korea tops the list as the most dangerous place for Christians. Historically, Communism has tried to assuage differences among people by eliminating religion, but instead, the Democratic People’s Republic of Korea replaced all religions with one worshiping of the Kim’s family. In China, the believers continue to be tightly controlled by the government for many years, under a threat of imprisonment in labor camps.

I was quite surprised when I saw Mexico on the list. When I looked into the report, harassment occurs when people want to convert their traditional native beliefs on non-traditional Protestant!

It is sad to see that Christians and followers of other religions are facing growing persecution around the world. The numbers of affected people are staggering. Is there really nothing we can do about it?

#Featured #Ideas
The role of Google Maps in the Russian invasion over Ukraine
Aleks Buczkowski 05.8.2022
AWESOME 5
#Ideas
Avoidance Mapping: What It Is & Where It Fits in the Cartography Cube
Rose Njambi 06.13.2022
AWESOME 3
#Ideas
The Immersive Map
Christopher Beddow 06.6.2022
AWESOME 0

Amazing visualization of how Christianity spread around the world

From a sect of Jews to a world dominating religion with over 2 billion followers, the story of Christianity is fascinating. This animated map gives a geographic look at the past 2,000 years and shows how the religion was spread around the world, first by Jesus’s disciples, then by emperors, kings, and missionaries.

It is also interesting to see how all five of the biggest religions in the world: Hinduism, Buddhism, Christianity, Judaism, and Islam spread across our planet.

The video is a part of a larger Business Insider series. You can find all of these videos here.