Could your mobile phone be used to track you even if the data is anonymous? “Unique in the Crowd: The privacy bounds of human mobility” is not only an interesting piece of research, its something that all of us were certain was possible,  even practiced but never really thought could be proved.

Although the wide spread use of sensor-studded cellphones have led to a wealth of information from apps that help community scientific experiments to voluntary geographic data collection that can help combat emergency and natural disasters but until today we believe that being anonymous meant that your location information was not being compromised or in other words it is not possible to hunt you down using such anonymous data. But guess what? We were all wrong! Wondering it should be difficult to do so right? Just how hard could it to be identify the identity of one anonymous cellphone user in a database that will contain millions of such records.. Apparently not so difficult. 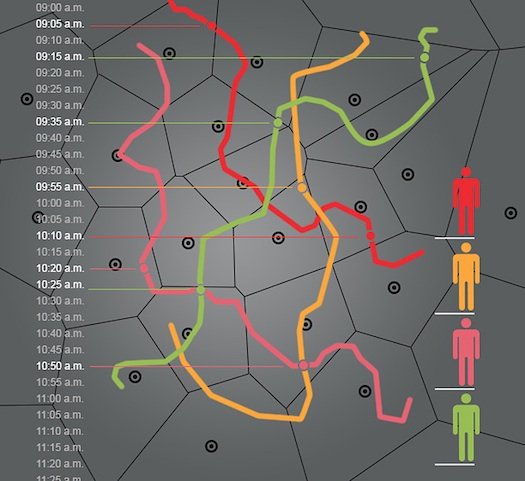 The research says that just 4 random points from our mobile phone’s location data is enough to put a name to 95% of the data in a cellphone database that is technically anomymized i.e. the data does not have any individual identification fields. Highly vindicating the growing concern that data available in the public domain – cellphone location information is not as anonymous as previously thought!

The research was carried out by researchers at MIT and the Université Catholique de Louvain, in Belgium. They had analyzed data of over a million cellphone users in a small European country over a span of 15 months and found that just four points of reference, with fairly low spatial and temporal resolution, was enough to uniquely identify 95 percent of the cellphone users.

In other words, to extract the complete location information for a single person from an “anonymized” data set of more than a million people, all you would need to do is place him or her within a couple of hundred yards of a cellphone transmitter, sometime over the course of an hour, four times in one year. A few Twitter posts would probably provide all the information you needed, if they contained specific information about the person’s whereabouts. – MIT News

The research adds more to the privacy debate that has been gathering steam over the last couple of months! What do you geo people think about this? Bottomline: Location data points from Cellphone usage is definitely comprising your location!

All geo-geeks remember last year’s Apple’s attempt to enter the mapping market with a product what was far behind the competition in term of geographic data quality. Guys from Cupertino has spent much of the last and this year working hard to improve its iOS Maps product. They’ve acquired a few new ‘geo-companies’ and decided to hire ‘ground truth’ mapping experts around the globe to work on data quality. 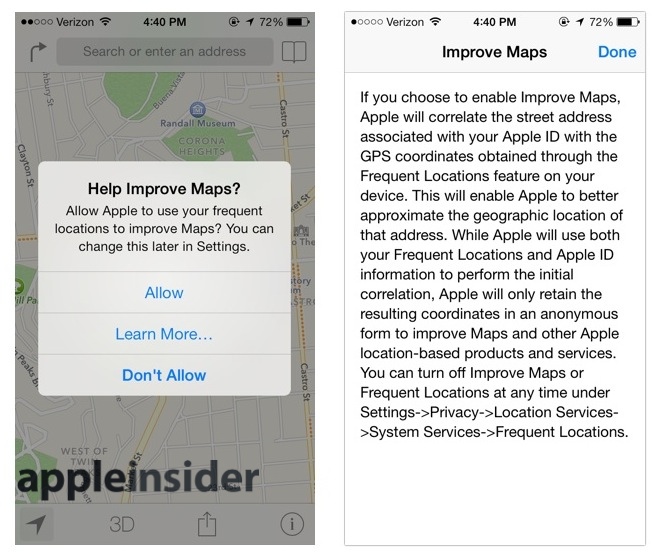 But Cupertino decided on yet another move to improve its maps… activate 400 mln Apple believers who uses iOS devices worldwide. According to Apple Insider iOS 7 will ask users if they want to help improve the Maps app which will be linked to a new features of iOS 7 called Frequent Locations and Maps Bookmarks, which is essentially something like Google Location History, where you can track with all details where you’ve been over last months, just that you’ve got an access to it over an app… while Google is trying to hide that it’s tracking our every move so you need to search for while to access you location history info. 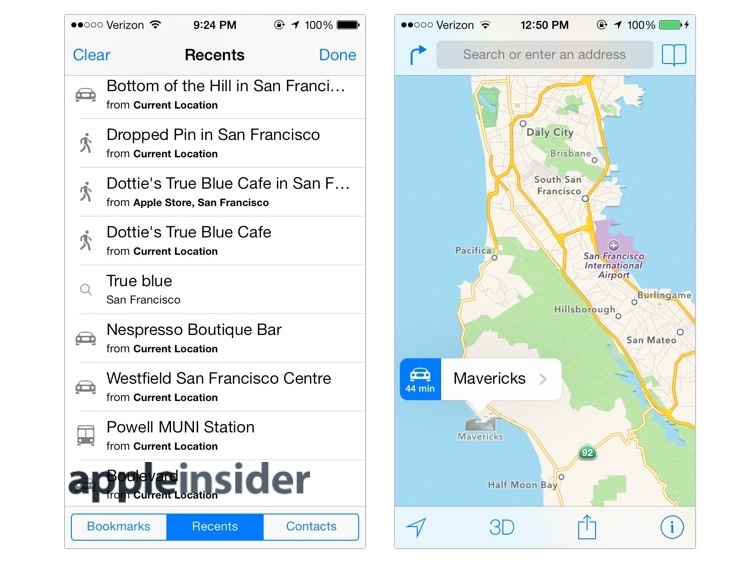 Users who decide to opt in for both features will have their Frequent Locations linked to their iCloud account and the system will automatically calculate driving (or walking) directions to locations as users select them in Maps. With this information Apple will be able to compare driving and walking time estimates to actual time it take users to reach the destination. Until now when I’ve been comparing real-time traffic travel times of iOS Maps and Google Maps, Mountain View was always more accurate. While one or two years back I wouldn’t think that I would thought of it as the most important feature of car navigation now I use it every time before meetings.

Will it help Apple to improve the quality of their mapping app? I don’t know as it’s a very complex issue but over $100 bln in cash Apple can surely do a lot.