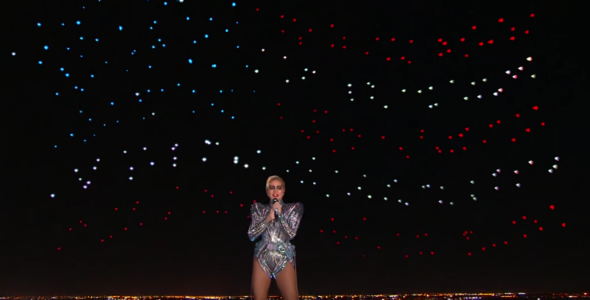 Drones have stolen the show of this year’s Super Bowl Half Time performance. A fleet of Intel’s 300 flying devices was dancing behind Lady Gaga as she stood on the roof of Houston’s NRG Stadium. It was an amazing show, and I’m sure it’s not the last time you’ve seen drones used to light up the skies during an event like that. But I believe that this performance is not all about entertainment, but it marks a significant milestone for drone industry and in particular UAV mapping area.

Today, UAVs are typically controlled by human operators, that have to plan the flight (or use an app to do that), go to the field, launch a drone, complete the survey in single or multiple rounds. Then they need to process the source data to get the result which is a 3D terrain model or other cartometric imagery-based product.

The scope of the project is limited by a range of the drone and the required resolution. The range depends on the battery life. Normally, fixed wing drones can survey up to several square miles and rotary drones below 0.1 mi2. The rotary drones offer however a higher spatial resolution that can be as small as 1mm, while with a fixed-wing device we talk about over a centimetre level of accuracy.

So if you have a large object to survey, you need multiple drones with multiple operators or one operator that gradually collects data for the whole project area. It complicates the operations in the field, increases the cost and compromises the temporal resolution (refresh of a given area to compare what has changed over time). For some objects like long power lines or pipelines, large-scale drone inspection might not be an option at all.

Lady Gaga’s Super Bowl Half Time shows that the drone control technology will soon allow what was previously impossible. Imagine that an operator controls not a single UAV but a whole fleet of dozens of autonomous flying robots. The central system divides the survey area between them. Real-time flight path tracking and dynamic flight recomputation allow the fleet to autonomously correct their route depending on the location of other devices. In that way we can survey a large area in a matter of minutes or automatically launch drones along the line.

The Super Bowl show was based on Intel’s Shooting Star technology but knowing the industry every relevant drone mapping company is already working on a similar solution. We’re about to see the evolution of the drone revolution, and it’s fascinating.

To date, the model for geoanalytics has tended to be very transactional: request imagery, analyze imagery, deliver imagery analysis results. Earth Observation is now heading towards a revolutionary model where all data is immediately available, all analysis is performed in near real-time as the data is acquired, and the distribution of the imagery analysis results are streamlined straight into users hands through apps and other channels, ready to be put to work.

In the same way that the integration of many unrelated technologies were integrated together into the creation of today’s smartphones, the future of Earth Observation and geoanalytics will involve the seamless integration of a wide range of technologies, sensing modalities and unconventional data sources.  We can already see how the Internet Of Things (IOT) and remote sensing are converging, with each technology combining in ways that we could only dream of a few years ago.

The explosion in the demand, largely attributable to the compounding effects of global population growth and climate change, to serve the rapidly expanding markets such as agriculture, forestry, energy, water management and insurance, is forcing these markets to look to Big Data to supply better, faster, higher-quality and cheaper access to actionable information. Consequently, as computing power grows according to Moore’s Law, the technological leaps needed to operate on Big Data will, without a doubt, be pushed far harder than Gordon ever envisioned.