Hivemapper builds living, evolving 3d maps of the world. As we improve our technologies in speed, accuracy, information content, flexibility, and many other ways we consistently develop and deploy state of the art algorithms to solve these problems. In this role, you will collaborate with teammates across the company to design, develop, test, and deploy sophisticated solutions to a wide variety of challenging problems.

The ideal candidate for this role not only has strong technical implementation skills, but a demonstrated fluency in flexible mathematical and algorithmic thinking. This role exists in both standard and senior forms depending on the experience of the applicant.

You can read more about how Hivemapper aims to replace static satellite-based maps.

Remote position of the week: Arabic Annontator at here

Say thanks for this article (0)
Geoawesomeness Team
46 posts
Want to be an author?

Using Google Maps for walking directions is arguably more difficult than following the magical blue dot while driving a vehicle. Though the Google Maps app shows a cone of view indicator to tell you which way you’re facing, it’s not uncommon to find that the blue dot itself has got your location wrong – especially in ‘urban canyons’.

In fact, if you go by the study released by location data company PlaceIQ, the average variance of smartphone positioning in a city is roughly 93 feet – varying from a low of 1-meter inaccuracy to a whopping high of 204 meters! 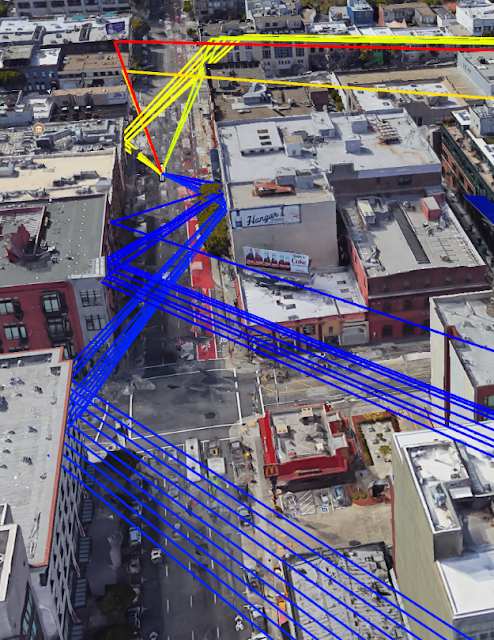 So, when Google Maps made augmented reality-powered navigation available to all Local Guides Level 5 and above for testing earlier this month, we were quite stoked. First announced at its I/O Developer conference in May 2018, this nifty new feature uses your smartphone camera as a sensor and combines Visual Positioning Service (VPS), Street View, and machine learning technologies to identify your position and orientation more accurately than ever.

Simply put, Google Maps is giving you the ability to overlay walking directions over real-world environments. And it looks something like this:

Also noteworthy is the emphasis the company has put on the safety of the users. For example, the app prompts you to hold the phone down when you’re walking straight, lest you bump into lamp posts or other people! If you ignore this instruction, the screen would automatically become dim – not a bad thing for a functionality that could actually prove to be a serial battery-drainer.

However, the strain on the phone’s battery is not the only limitation of this new technology. Google has its work cut out to make AR-enhanced walking directions work everywhere, such as in low light conditions, snowstorms, or heavy rains. Which is why it would be sometime before the feature is released to the public at large. But those who are helping Google test the technology have been raving about the resourcefulness of AR-powered navigation.

I am having the opportunity to preview-test the new Augmented Reality #AR functionality for pedestrian navigation on #GoogleMaps and it’s absolutely amazing. I see tremendous potential value in this being built into the windshield of #cars. Works on the #iPhoneX, but not on #S6+. pic.twitter.com/TLwS5u1Ntg

It’s a great concept, and the AR manages to “calibrate” to your direction/orientation VERY quickly and accurately — does Street View data have a role to play?

Using this is great, and I can see that a lot of people will find this extremely useful in getting around new places

Are you among the lucky few who have access to AR Walking Navigation in Google Maps? We would love to hear what you think about the feature in the comments!