Indian Railways has just launched a new service called RailRadar to track a train’s exact location on a map. RailRadar is an online app where one can find the exact geographical location of about 6,500 trains on a Google map on real-time basis. The system enables a colour code method as trains highlighted in blue indicate those that are running on time while the red markers indicate the trains that are delayed or behind schedule.

To find out where your train is, simply search for its name or number and RailRadar will spot it for you. You can also find trains by entering the name of the station. One might think that it’s nothing fancy but when you look at the numbers India has the largest rail networks in the world — it operates more than 10,000 trains everyday and when you look at the top-right of the image you’ll notice that at this particular moment when I write the post only 60% of all trains are on time….

At this time there is no smartphone app but surely it’s just a matter of time. 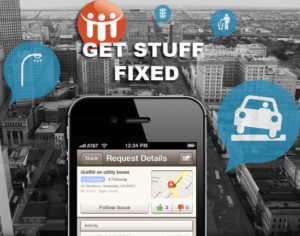 We’ve been seeing couple of ‘citizen apps over last years. On of the best was Portland’s system and app PDX Reporter – open source system to connect community to local authorities. The idea was that people will report problems to relevant local government office and then they can check the progress on fixing the issue. PublicStuff, the New York City based startup went one step further and made a commercial  system based on a very similar idea.

Here’s PublicStuff’s value proposition: Say you notice a pothole in the street or lingering trash on a curb, and you want to report it to the authorities. The way that most cities typically manage the reporting and handling of such issues is through a telephone line or a basic email inbox, which means that the reception and handling of public requests can be slow and spotty. PublicStuff has made a web-based system aimed at providing a faster and more efficient way for such requests to be submitted, received, and closed out. 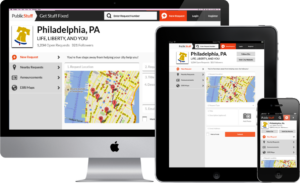 On the public-facing side, PublicStuff’s system lets people report outstanding issues to the relevant local authorities via the web or its apps for iOS, Android and Blackberry. On the government’s side, PublicStuff provides a web program for city staff members to monitor the inbound service requests and manage the assignments. People who make requests can check back in on the progress of the fix.

Recently Public stuff has raised $5 million in new funding so we can expect expansion of the system to new cities fast.

The idea is simple but it actually addresses needs of both citizens and local authorities therefore I think that this start-up has a bright future ahead.