How does it feel to be a cartographer in the age of Google Maps? Interview with Mamata Akella

Cartographers are the artists of the GeoGeek world and each map has the signature of the artist who created it. But then in the age of Google Maps, is it hard for the Cartographer to express himself/herself in the same way one could do with paper maps? 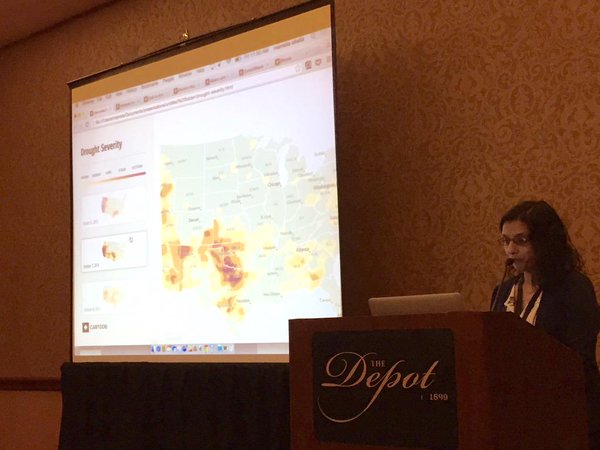 Who better to ask than a cartographer who’s worked with Esri, CartoDB and is a recognised face in the cartographic circles – Mamata Akella, senior cartographer at CartoDB.

It doesn’t get more “GeoGeeky” than talking about maps and cartographer with a  passionate cartographer. Here’s the summary of what was a really wonderful chat with an awesome Cartographer for the second post in the OffBeat GeoGeek Series. Read on….

How did you get into mapmaking? Or to be more precise, Cartography? 😉

The first time I attempted to do my undergrad, I didn’t succeed because at 18 it was really hard to know what I wanted to do with the rest of my life! I didn’t have a passion, something that really excited me. In between my unsuccessful attempt and my successful attempt, I took a year off to think more about what I wanted to do. At the time, my oldest sister was working at Conservation International in Washington, DC. She told me about a group there that did something called GIS and that it had to do with data, analysis, and maps. I had never heard of such a thing but looked into it and found that University of California, Santa Barbara had a really great Geography program. I didn’t have many college credits so I did two years at Santa Barbara City College where I got introduced to Geography. It wasn’t until I transferred to UC Santa Barbara that I actually made a map.
At UCSB part of the GIS track was Cartography.  Some cartographers have been interested in maps their whole lives… that wasn’t me! My first exposure to the field was my intro to cartography class and this is where so many things changed for me. The GIS and Remote Sensing classes were interesting but I LOVED my cartography class. A large part of it had to do with the people who taught me, my cartography professor Dr. Sara Fabrikant and my TA Dr. Kirk Goldsberry. After all these years I had found something that I was passionate about, that excited me, and that I was actually kind of good at! I would sit in the lab for hours and hours designing maps… I realized, ok, this is it… you’ve found it. Over the next two years, I made as many maps as I could, and interned at a variety of places who used maps and GIS in different ways.
After undergrad I went to Penn State where I studied under Dr. Cindy Brewer.  She introduced me to many new things (obviously!) but one that really sticks out for me was blending cartography and GIS . Or, data driven cartography. I worked with her during my master’s on multi-scale map design which prepared me for a summer internship at Esri on the same subject. Right after I finished at Penn State (2008) I joined Esri as a Cartographic Product Engineer, building maps for the web and have been doing it ever since.
I’ve also been lucky enough to have many mentors over the years during different parts of my academic and professional career… which has been a huge part of my passion for what I do!

How relevant is Cartography in the age of Google Maps? Have computer scientists taken over the art of map making? How do you think Cartographers have adapted to the digital challenge?

I think cartography is super relevant and that there are so many different people building maps!
Throughout my career I’ve worked at a place with a lot of cartographers to the other end of being the only cartographer. But maybe that’s better put by saying the only person who specifically studied cartography. That has never meant for me that no one else around me is a cartographer. Actually, for me, its quiet the opposite. People that I work/worked with who don’t have formal cartographic training are some of the smartest and most passionate cartographers I know. Sure, they might not get down to the nitty gritty of the actual font, size, and placement but they do get down into the nitty gritty of how to make that possible for people like me. For me, the blending of traditional cartography, computer science, and the web, keeps things exciting… so let’s keep going!

People that I work/worked with who don’t have formal cartographic training are some of the smartest and most passionate cartographers I know.

One thing we can all do as digital map makers is look to the field of cartography for research, best practices, design inspiration, and years and years of experience and infuse that, as much as possible, back into our digital tools and workflows. Cartography isn’t some super secret special society! We are actually some of the most welcoming people and have adapted to change after change throughout the years. Just come to the North American Cartographic Information Society (NACIS) annual meeting and see for yourself!

If you had a magic wand to eradicate one (cartographic) error on digital maps, what would that be?

Piling everything possible on a map just because you can.

You have worked with Esri, the National Park Service and CartoDB and are a well-recognised cartographer. What is your advice for budding GeoGeeks and the next-gen geospatial grads?

Well, that’s nice of you to say! My biggest piece of advice: ask questions, try out new things, don’t be afraid to fail, ask more questions!  I’ve been a professional web cartographer for about 9 years now. Still, to this day, I ask questions even ones that some might consider ‘basic’. I went from using ArcGIS to the Mapbox suite, to CartoDB and if I hadn’t asked all the questions that I had to all of the people I have, I don’t know how I would have navigated those pretty radical shifts.
Also, diversify your skill set. If I could go back, I wouldn’t do many things differently, but I would learn more about web development, scripting, and databases… In this age of web cartography, those skills, in addition to design thinking, are critical.

Digital maps unlike paper maps don’t necessarily have to restrict the amount of information, does this make life easier when you need to create a new base map?

Yes, but mostly no. Basemap design is definitely a big cartographic challenge and those who do it should be appreciated! haha…
What you didn’t mention is that paper maps restrict the area being viewed. Sure, the web provides the zoomable map and tools to interact with different components of the data so there is some flexibility in choosing what information to include on the map depending on zoom, etc. BUT the actual design piece is pretty challenging. Think of one map design that has to look good through multiple zoom levels for the entire world! At any one time, basemap designers are juggling 50+ features at a given zoom level and those 50+ features have to work well together no matter what part of the map you zoom or pan to. Urban areas in one country, state, province are so different from each other! And if you design strictly for the urban areas, what happens to the rural ones? I could go on and on about this, but I think that sometimes that piece of basemap design is overlooked!

Think of one map design that has to look good through multiple zoom levels for the entire world!

If you had to pick one map as the most geoawesome one that you ever made. Which one would it be?

I’ve made a lot of maps over the years and at any one time I might have thought that it was the most awesome map I ever made… ha! Lately, my favorite maps are the ones that don’t use Web Mercator!! Recently, I made a dot density map with my co-worker Stuart Lynn. I think this map is super cool for a few different reasons but mostly because of the function that Stuart wrote and the fact that it is a dot density map, on the web, that uses an equal area projection (as it should!!)

Lately, my favorite maps are the ones that don’t use Web Mercator!!

Haha, I can’t disagree with you about Web Mercator (can’t we just use another projection already)! Thanks, Mamata 🙂

It is a black day for Belgium, Europe and the whole world. A suicide attacks at Brussels airport and metro station killed at least 34 people and left hundreds wounded. As terrorists continue to strike across the globe, the terror threat starts to be one of the most significant problem of our civilization.

According to the Global Terrorism Index report published by the Institute for Economics and Peace last year, the terror threat around the world increased by 80% in 2014 reaching the highest levels ever recorded. With attacks in France, Nigeria, Turkey and today in Belgium we can say that 2015 and 2016 are no better. 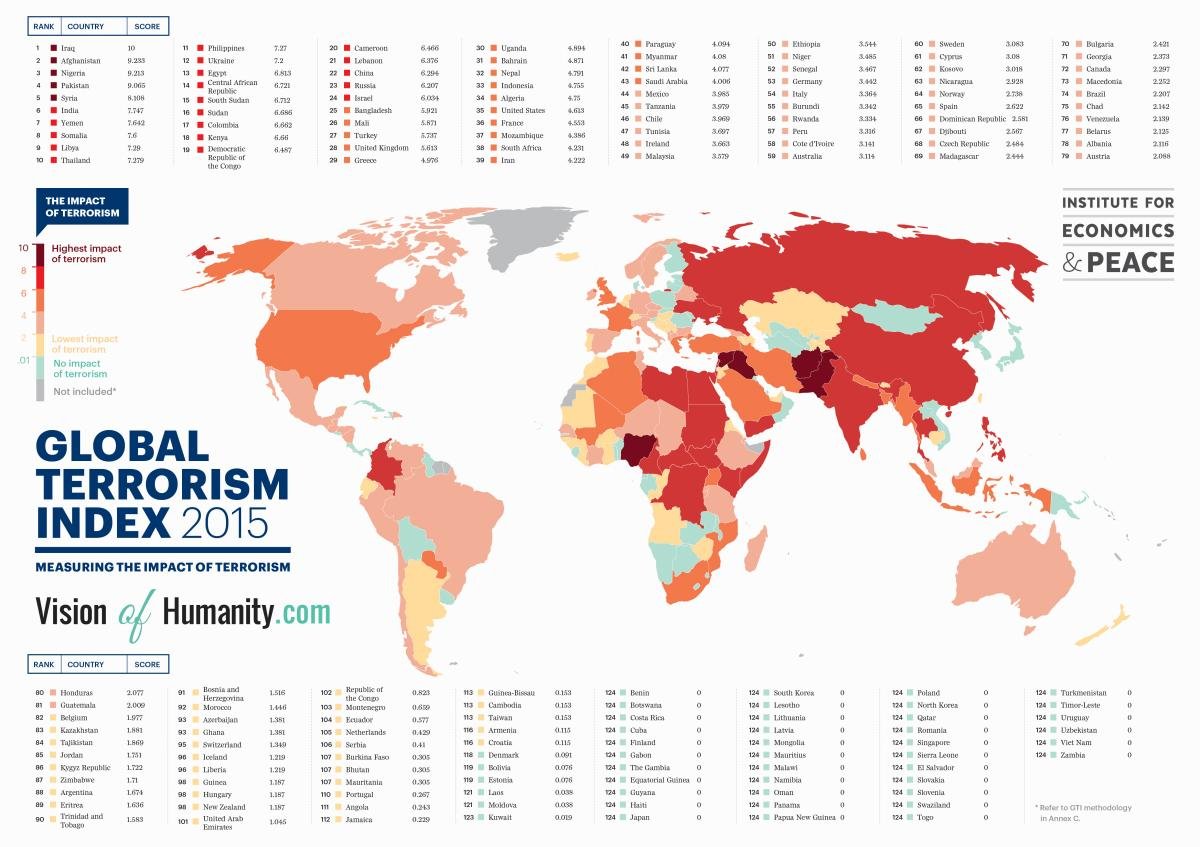 The map above shows the impact of terrorism on particular countries (with the interactive version here). The darker the color the most severe impact. The report says that the most dangerous countries are Iraq, Afghanistan, Nigeria, Pakistan and Syria but many other countries like the US, UK, Belgium and France have high or very high risk of terrorism. Even more terrifying is the graph below. 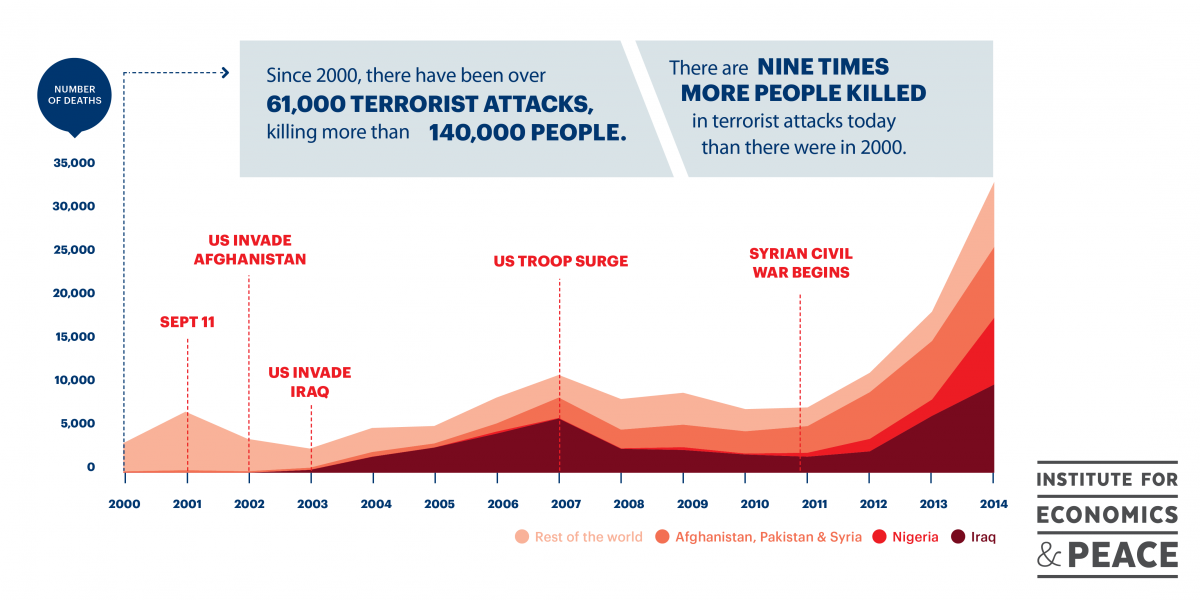 In the last 15 years over 140.000 were killed in terrorist attacks around the world (with over 32.000 in 2014). The report states that the organizations responsible for a majority of these murders (51%) are Boko Haram, which operates in Nigeria and Central Africa, and ISIS, which operates in Iraq and Syria. If we consider the fact that Boko Haram has sworn allegiance to ISIS and began operating as an extension of ISIS in Africa, in essence ISIS is responsible for most of the deaths due to terrorism in the world.

Today’s events show that the terrorism threat is not going to decrease anytime soon. Our thoughts and prayers are with the families of the victims. We live in dangerous times.